Reply ✍ Transcribed
From a day in the life by Michael McThune (author's profile)
Share this:
uploaded April 21, 2018.  Original (PDF) 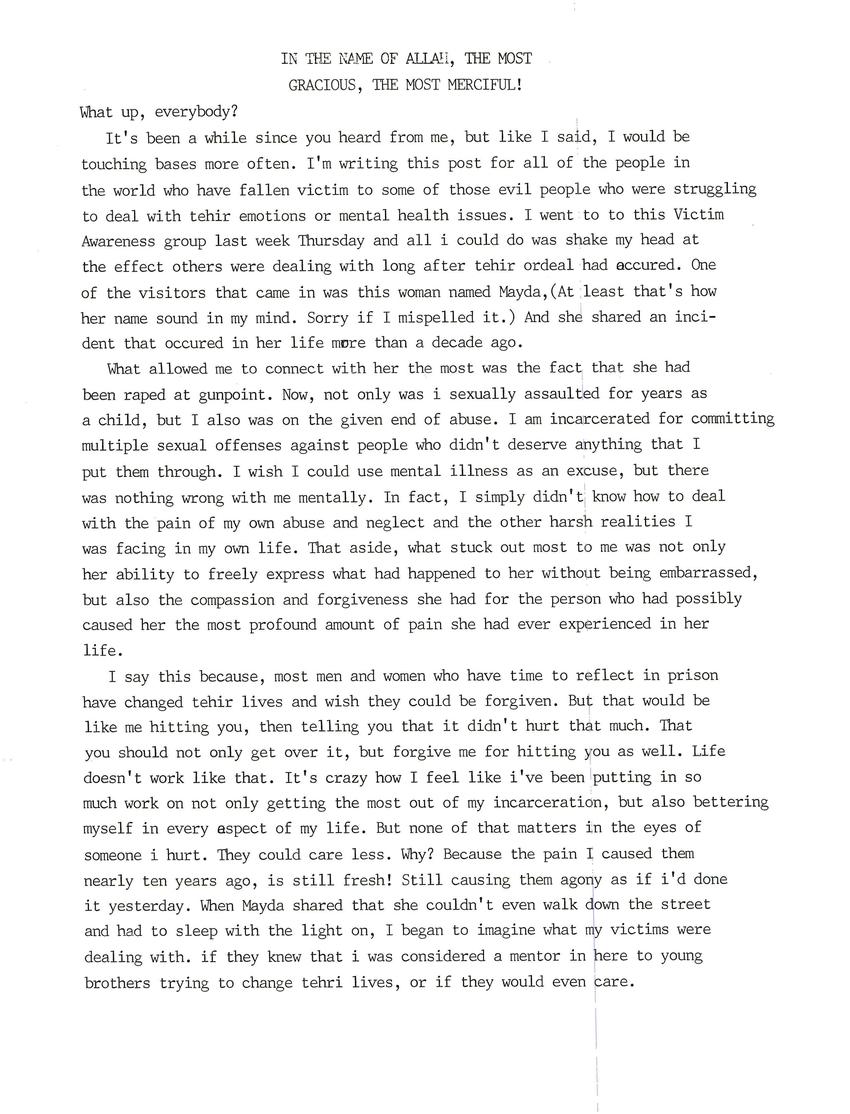 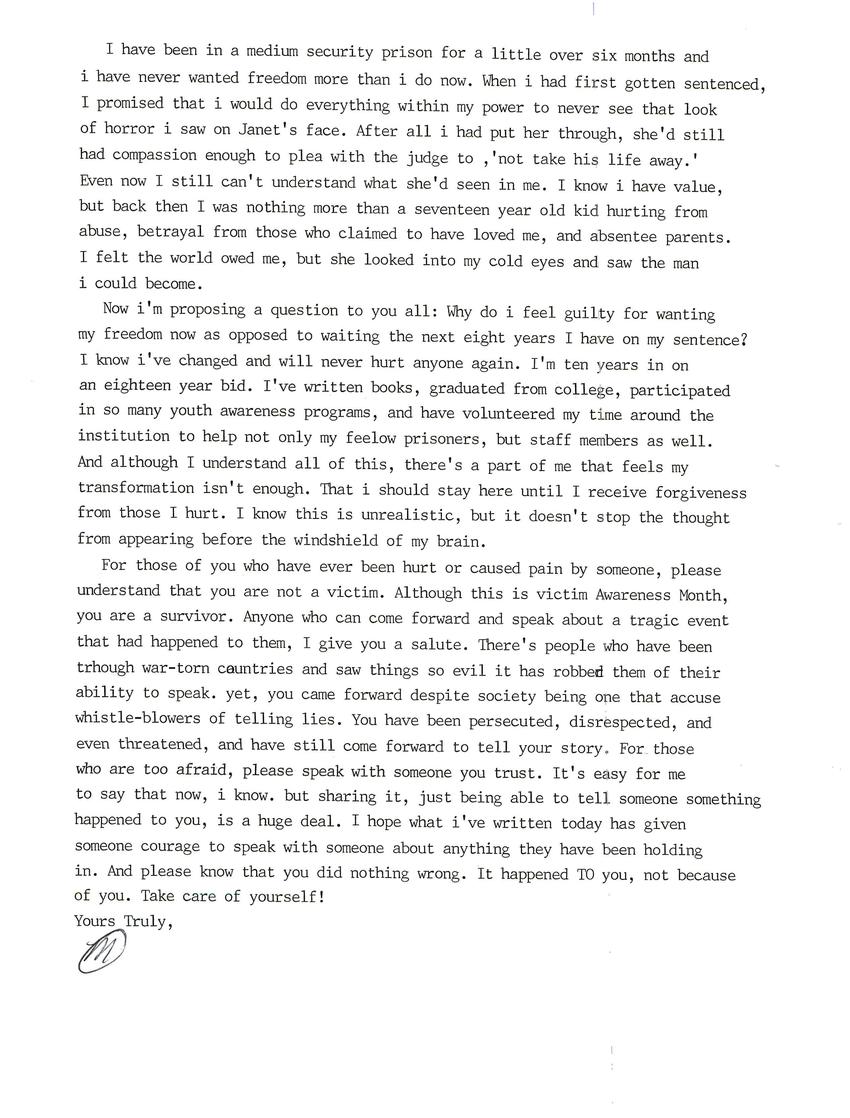 IN THE NAME OF ALLAH, THE MOST
GRACIOUS, THE MOST MERCIFUL!

What up, everybody?
It's been a while since you heard from me, but like I said, I would be touching bases more often. I'm writing this post for all of the people in the world who have fallen victim to some of those evil people who were struggling to deal with their emotions or mental health issues. I went to this Victim Awareness group last week Thursday and all i could do was shake my head at the effect others were dealing with long after their ordeal occurred. One of the visitors that came in was this woman named Mayda, (At least that's how her name sound in my mind. Sorry if I mispelled it.) And she shared an incident that occurred in her life more than a decade ago.
What allowed me to connect with her the most was the fact that she had been raped at gunpoint. Now, not only was i sexually assaulted for years as a child, but I also was on the given end of abuse. I am incarcerated for committing multiple sexual offenses against people who didn't deserve anything that I put them through. I wish I could use mental illness as an excuse, but there was nothing wrong with me mentally. In fact, I simply didn't know how to deal with the pain of my own abuse and neglect and the other harsh realities I was facing in my own life. That aside, what stuck out most to me was not only her ability to freely express what had happened to her without being embarrassed, but also the compassion and forgiveness she had for the person who had possibly caused her the most profound amount of pain she had ever experienced in her life.
I say this because, most men and women who have time to reflect in prison have changed their lives and wish they could be forgiven. But that would be like me hitting you, then telling you that it didn't hurt that much. That you should not only get over it, but forgive me for hitting you as well. Life doesn't work like that. It's crazy how I feel like I've been putting in so much work on not only getting the most out of my incarceration, but also bettering myself in every aspect of my life. But none of that matters in the eyes of someone I hurt. They could care less. Why? Because the pain I caused them nearly ten years ago, is still fresh! Still causing them agony as if I'd done it yesterday. When Mayda shared that she couldn't even walk down the street and had to sleep with the light on, I began to imagine what my victims were dealing with. If they knew that I was considered a mentor in here to young brothers trying to change their lives, or if they would even care.

I have been in a medium security prison for a little over six months and I have never wanted freedom more than I do now. When I had first gotten sentenced, I promised that I would do everything within my power to never see that look of horror I saw on Janet's face. After all I had put her through, she'd still had compassion enough to plea with the judge to, 'not take his life away.' Even now I still can't understand what she'd seen in me. I know I have value, but back then I was nothing more than a seventeen year old kid hurting from abuse, betrayal from those who claimed to have loved me, and absentee parents. I felt the world owed me, but she looked into my cold eyes and saw the man I could become.
Now I'm proposing a question to you all: Why do I feel guilty for wanting my freedom now as opposed to waiting the next eight years I have on my sentence? I know I've changed and will never hurt anyone again. I'm ten years in on an eighteen year bid. I've written books, graduated from college, participated in so many youth awareness programs, and have volunteered my time around the institution to help not only my fellow prisoners, but staff members as well. And although I understand all of this, there's a part of me that feels my transformation isn't enough. That I should stay here until I receive forgiveness from those I hurt. I know this is unrealistic, but it doesn't stop the thought from appearing before the windshield of my brain.
For those of you who have ever been hurt or caused pain by someone, please understand that you are not a victim. Although this is Victim Awareness Month, you are a survivor. Anyone who can come forward and speak about a tragic event that had happened to them, I give you a salute. There's people who have been through war-torn countries and saw things so evil it has robbed them of their ability to speak. Yet, you came forward despite society being one that accuse whistle-blowers of telling lies. You have been persecuted, disrespected, and even threatened, and have still come forward to tell your story. For those who are too afraid, please speak with someone you trust. It's easy for me to say that now, I know. But sharing it, just being able to tell someone something happened to you, is a huge deal. I hope what I've written today has given someone courage to speak with someone about anything they have been holding in. And please know that you did nothing wrong. It happened TO you, not because of you. Take care of yourself!
Yours Truly,
[signature]