Reply ✍ Transcribed
From a day in the life by Michael McThune (author's profile)
Share this:
uploaded June 24, 2017.  Original (PDF) 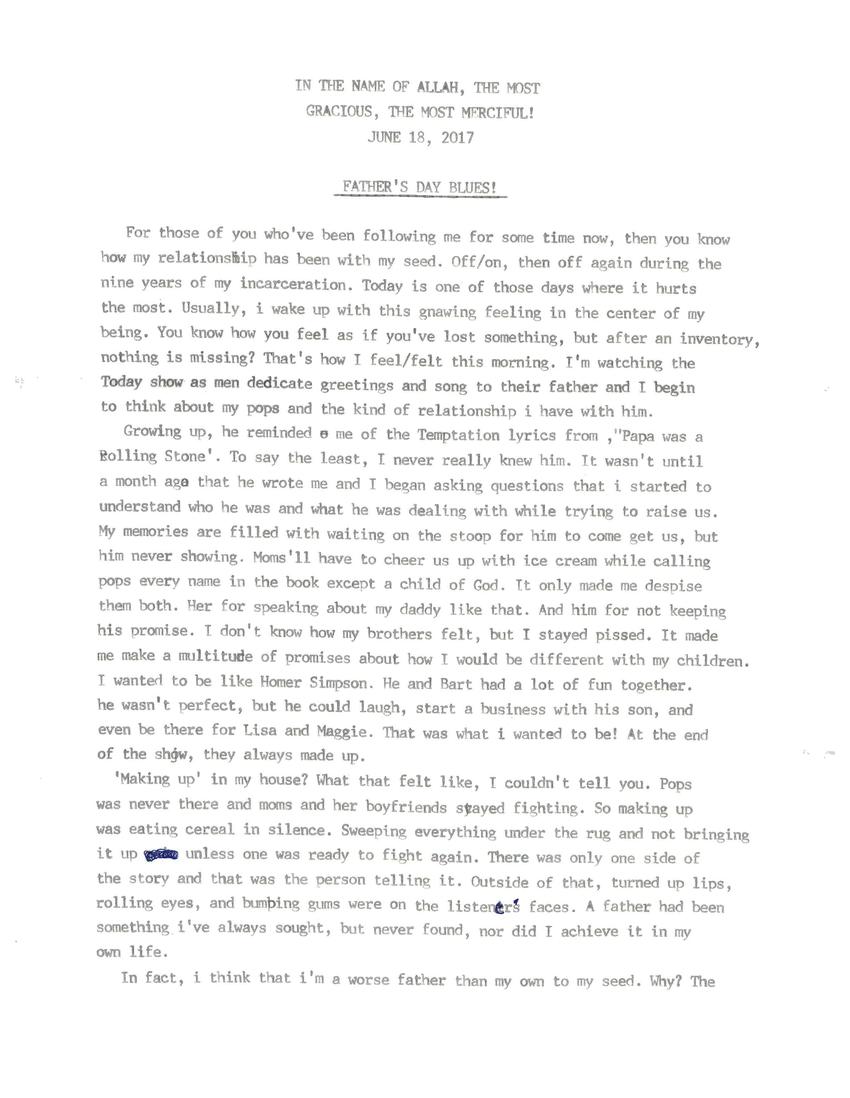 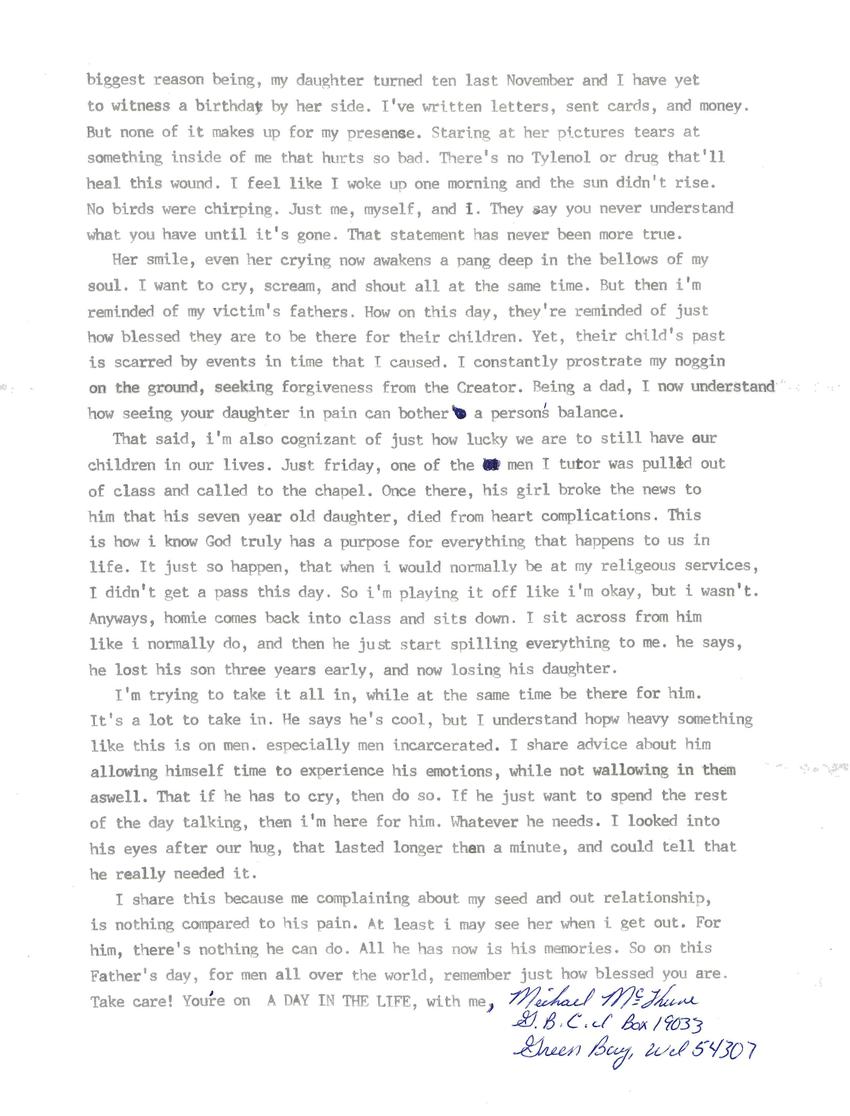 For those of you who've been following me for some time now, then you know how my relationship has been with my seed. Off/on, then off again during the nine years of my incarceration. Today is one of those days where it hurts the most. Usually, I wake up with this gnawing feeling in the center of my being. You know how you feel as if you've lost something, but after an inventory, nothing is missing? That's how I feel/felt this morning. I'm watching the Today show as men dedicate greetings and song to their father and I begin to think about my pops and the kind of relationship I have with him.
Growing up, he reminded me of the Temptation lyrics from ,"Papa was a Rolling Stone'. To say the least, I never really knew him. It wasn't until a month ago that he wrote me and I began asking questions that I started to understand who he was and what he was dealing with while trying to raise us. My memories are filled with waiting on the stoop for him to come get us, but him never showing. Moms'll have to cheer us up with ice cream while calling pops every name in the book except a child of God. It only made me despise them both. Her for speaking about my daddy like that. And him for not keeping his promise. I don't know how my brothers felt, but I stayed pissed. It made me make a multitude of promises about how I would be different with my children. I wanted to be like Homer Simpson. He and Bart had a lot of fun together. he wasn't perfect, but he could laugh, start a business with his son, and even be there for Lisa and Maggie. That was what I wanted to be! At the end of the show, they always made up.
'Making up' in my house? What that felt like, I couldn't tell you. Pops was never there and moms and her boyfriends stayed fighting. So making up was eating cereal in silence. Sweeping everything under the rug and not bringing it up unless one was ready to fight again. There was only one side of the story and that was the person telling it. Outside of that, turned up lips, rolling eyes, and bumping gums were on the listeners faces. A father had been something I've always sought, but never found, nor did I achieve it in my own life.
In fact, I think that I'm a worse father than my own to my seed. Why? The biggest reason being, my daughter turned ten last November and I have yet to witness a birthday by her side. I've written letters, sent cards and money. But none of it makes up for my presence. Staring at her pictures tears at something inside of me that hurts so bad. There's no Tylenol or drug that'll heal this wound. I feel like I woke up one morning and the sun didn't rise. No birds were chirping. Just me, myself, and I. They say you never understand what you have until it's gone. That statement has never been more true.
Her smile, even her crying now awakens a pang deep in the bellows of my soul. I want to cry, scream, and shout all at the same time. But then I'm reminded of my victim's fathers. How on this day, they're reminded of just how blessed they are to be there for their children. Yet, their child's past is scarred by events in time that I caused. I constantly prostrate my noggin on the ground, seeking forgiveness from the Creator. Being a dad, I now understand how seeing your daughter in pain can bother a persons balance.
That said, I'm also cognizant of just how lucky we are to still have our children in our lives. Just Friday, one of the men I tutor was pulled out of class and called to the chapel. Once there, his girl broke the new to him that his seven year old daughter, died from heart complications. This is how I know God truly has a purpose for everything that happens to us in life. It just so happen, that when I would normally be at my religious services, I didn't get a pass this day. So I'm playing it off like I'm okay, but I wasn't. Anyways, homie comes back into class and sits down. I sit across from him like I normally do, and then he just start spilling everything to me. he says, he lost his son three years early, and now losing his daughter.
I'm trying to take it all in, while at the same time be there for him. It's a lot to take in. He says he's cool, but I understand how heavy something like this is on men. especially men incarcerated. I share advice about him allowing himself time to experience his emotions, while not wallowing in them aswell. That if he has to cry, then do so. If he just want to spend the rest of the day talking, then I'm here for him. Whatever he needs. I looked into his eyes after our hug, that lasted longer than a minute, and could tell that he really needed it.
I share this because me complaining about my seed and out relationship, is nothing compared to his pain. At least I may see her when I get out. For him, there's nothing he can do. All he has now is his memories. So on this Father's day, for men all over the world, remember just how blessed you are. Take care! You're on A DAY IN THE LIFE, with me,
Michael McThure
G.B.C.U Box 19033
Green Bay, Wil 54307