Reply ✍ Transcribed
From a day in the life by Michael McThune (author's profile)
Share this:
uploaded Feb. 21, 2018.  Original (PDF) 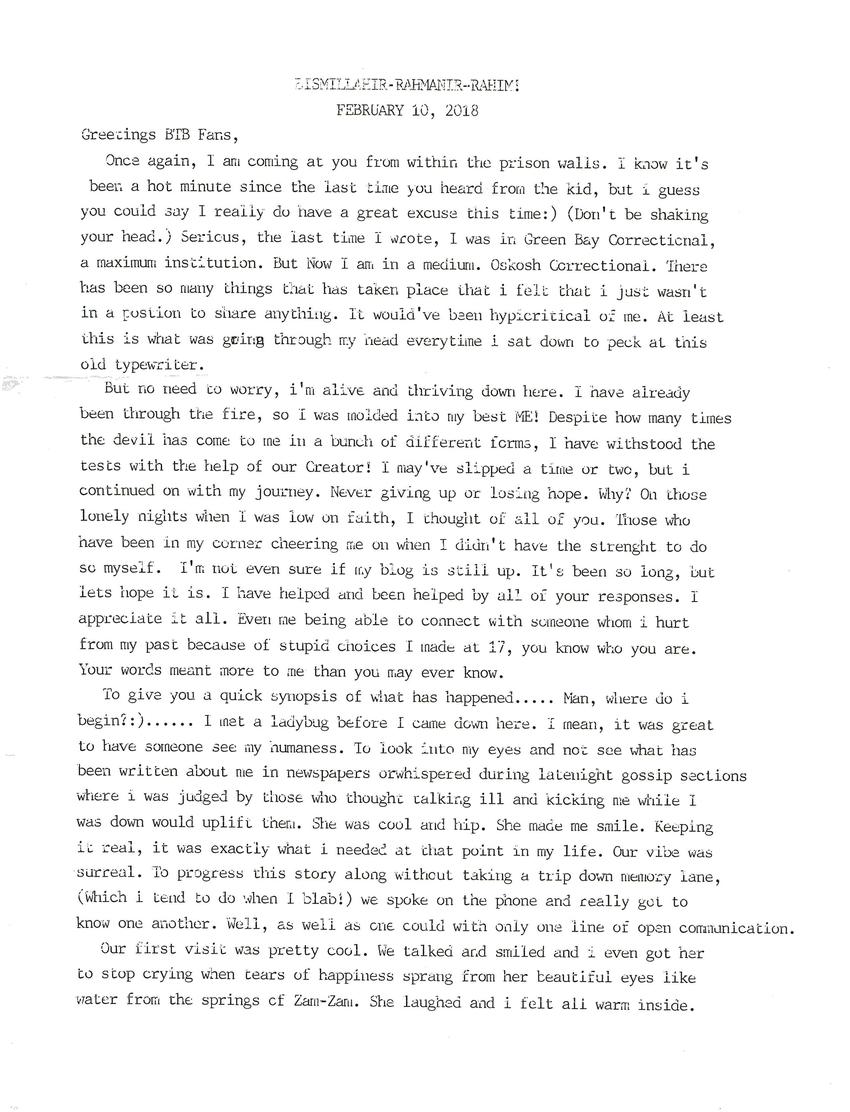 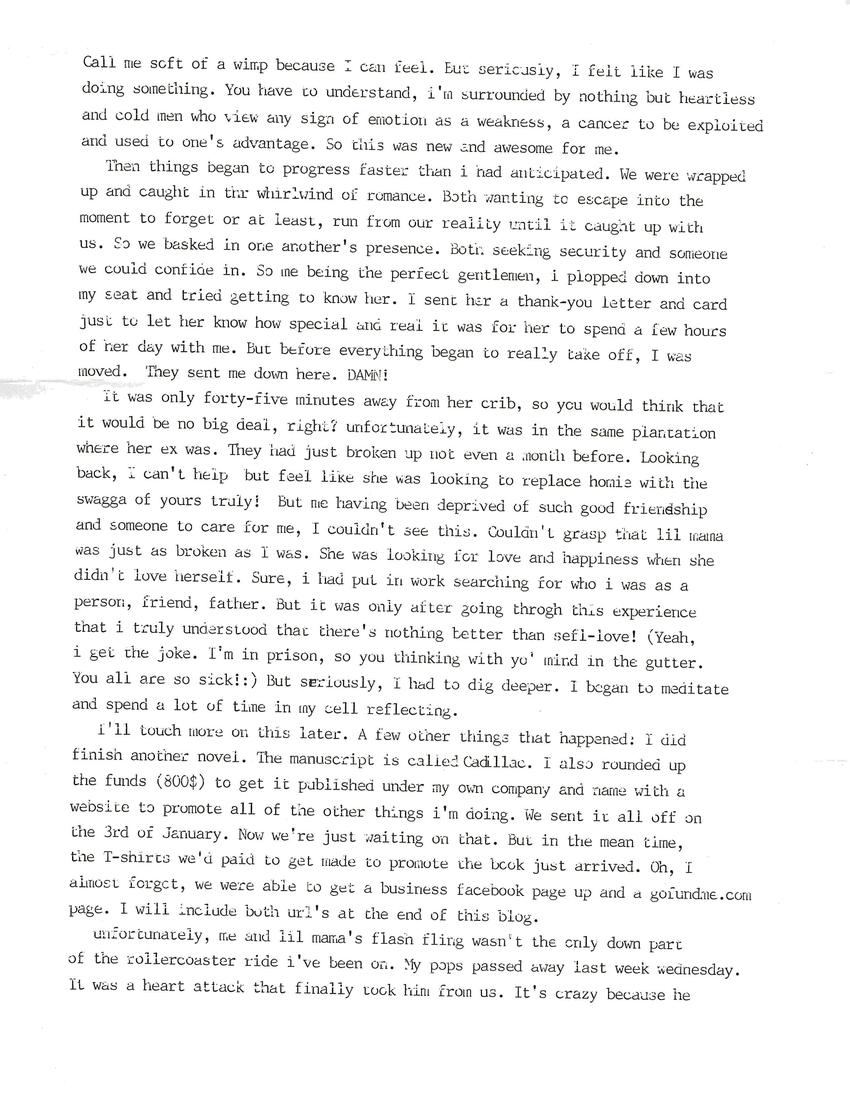 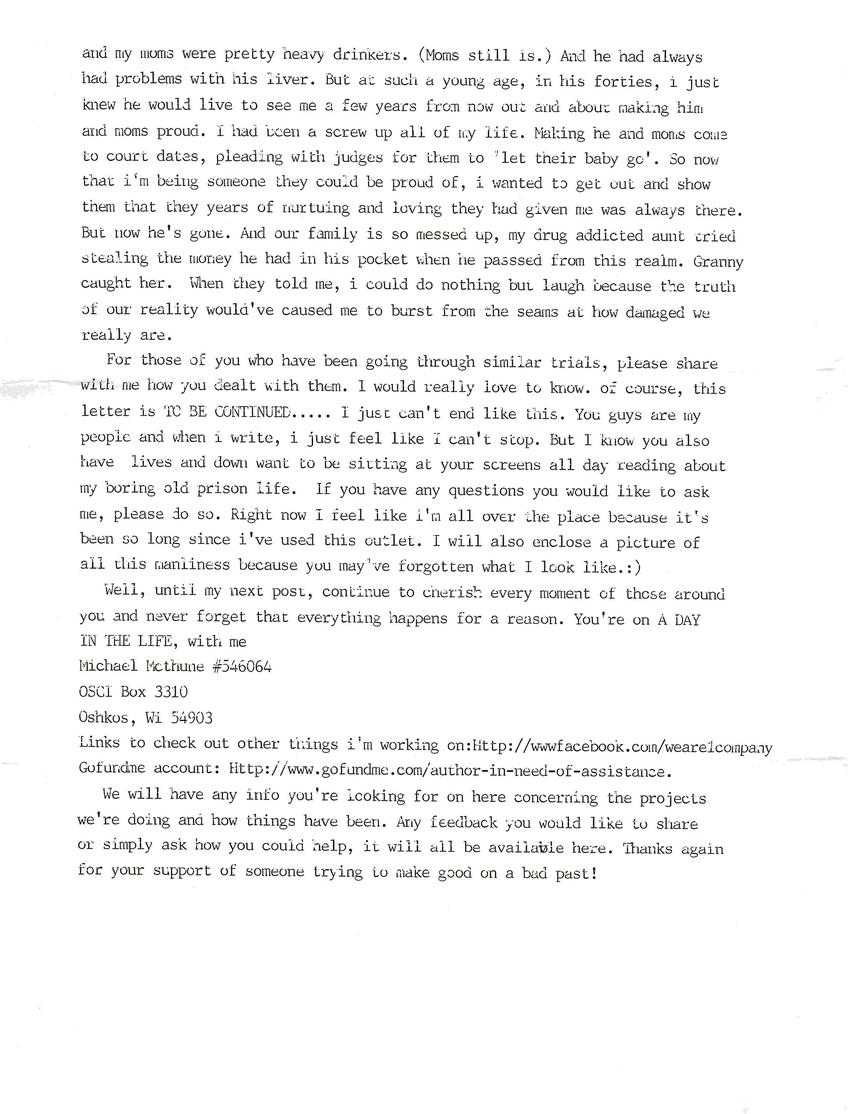 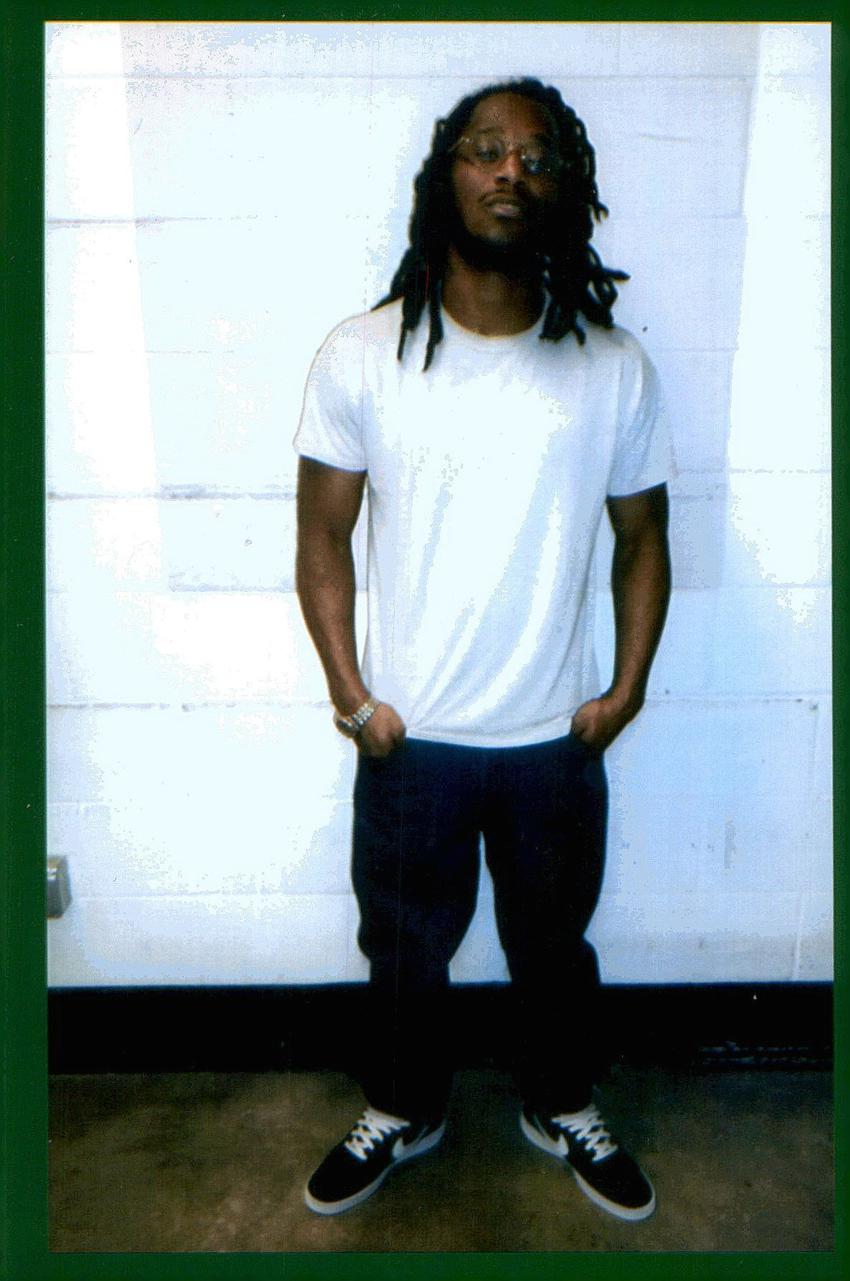 Greetings BTB Fans,
Once again, I am coming at you from within the prison walls. I know it's been a hot minute since the last time you heard from the kid, but I guess you could say I really do have a great excuse this time :) (Don't be shaking your head.) Serious, the last time I wrote, I was in Green Bay Correctional, a maximum institution. But now I am in a medium. Oskosh Correctional. There has been so many things that has taken place that I felt that I just wasn't in a position to share anything. It would've been hypocritical of me. At least this is what was going through my head everytime I sat down to peck at this old typewriter.
But no need to worry, I'm alive and thriving down here. I have already been through the fire, so I was molded into my best ME! Despite how many times the devil has come to me in a bunch of different forms, I have withstood the tests with the help of our Creator! I may've slipped a time or two, but I continued on with my journey. Never giving up or losing hope. Why? On those lonely nights when I was low on faith, I thought of all of you. Those who have been in my corner cheering me on when I didn't have the strength to do so myself. I'm not even sure if my blog is still up. It's been so long, but lets hope it is. I have helped and been helped by all of your responses. I appreciate it all. Even me being able to connect with someone whom I hurt from my past because of stupid choices I made at 17, you know who you are. Your words meant more to me than you may ever know.
To give you a quick synopsis of what has happened..... Man, where do I begin? :)...... I met a ladybug before I came down here. I mean, it was great to have someone see my humanness. To look into my eyes and not see what has been written about me in newspapers or whispered during late night gossip sections where I was judged by those who thought talking ill and kicking me while I was down would uplift them. She was cool and hip. She made me smile. Keeping it real, it was exactly what I needed at that point in my life. Our vibe was surreal. To progress this story along without taking a trip down memory lane, (which I tend to do when I blab!) we spoke on the phone and really got to know one another. Well, as well as one could with only one line of open communication.
Our first visit was pretty cool. We talked and smiled and I even got her to stop crying when tears of happiness sprang from her beautiful eyes like water from the springs of Zam-Zam. She laughed and I felt all warm inside.

Call me soft of a wimp because I can feel. But seriously, I felt like I was doing something. You have to understand, I'm surrounded by nothing but heartless and cold men who view any sign of emotion as a weakness, a cancer to be exploited and used to one's advantage. So this was new and awesome for me.
Then things began to progress faster than I had anticipated. We were wrapped up and caught in the whirlwind of romance. Both wanting to escape into the moment to forget or at least, run from our reality until it caught up with us. So we basked in one another's presence. Both seeking security and someone we could confide in. So me being the perfect gentlemen, I plopped down into my seat and tried getting to know her. I sent her a thank-you letter and card just to let her know how special and real it was for her to spend a few hours of her day with me. But before everything began to really take off, I was moved. They send me down here. DAMN!
It was only forty-five minutes away from her crib, so you would think that it would be no big deal, right? Unfortunately, it was in the same plantation where her ex was. They had just broken up not even a month before. Looking back, I can't help but feel like she was looking to replace homie with the swagga of yours truly! But me having been deprived of such good friendship and someone to care for me, I couldn't see this. Couldn't grasp that lil mama was just as broken as I was. She was looking for love and happiness when she didn't love herself. Sure, I had to put in work searching for who I was as a person, friend, father. But it was only after going through this experience that I truly understood that there's nothing better than self-love! (Yeah, I get the joke. I'm in prison, so you thinking with yo' mind in the gutter. You all are so sick!:) But seriously, I had to dig deeper. I began to meditate and spend a lot of time in my cell reflecting.
I'll touch more on this later. A few other things that happened: I did finish another novel. The manuscript is called Cadillac. I also rounded up the funds (800$) to get it published under my own company and name with a website to promote all of the other things I'm doing. We sent it all off on the 3rd of January. Now we're just waiting on that. But in the mean time, the T-shirts we'd paid to get made to promote the book just arrived. Oh, I almost forgot, we were able to get a business facebook page up and a gofundme.com page. I will include both url's at the end of this blog.
Unfortunately, me and lil mama's flash fling wasn't the only down part of the rollercoaster ride I've been on. My pops passed away last week Wednesday. It was a heart attack that finally took him from us. It's crazy because he and my moms were pretty heavy drinkers. (Moms still is.) And he had always had problems with his liver. But at such a young age, in his forties, I just knew he would live to see me a few years from now out and about making him and moms proud. I had been a screw up all of my life. Making he and moms come to court dates, pleading with judges for them to 'let their baby go'. So now that I'm being someone they could be proud of, I wanted to get out and show them that the years of nurturing and loving they had given me was always there. But now he's gone. And our family is so messed up, my drug addicted aunt tried stealing the money he had in his pocket when he passed from this realm. Granny caught her. When they told me, I could do nothing but laugh because the truth of our reality would've caused me to burst from the seams at how damaged we really are.
For those of you who have been going through similar trials, please share with me how you dealt with them. I would really love to know. Of course, this letter to is TO BE CONTINUED..... I just can't end like this. You guys are my people and when I write, I just feel like I can't stop. But I know you also have lives and down want to be sitting at your screens all day reading about my boring old prison life. If you have any questions you would like to ask me, please do so. Right now I feel like I'm all over the place because it's been so long since I've used this outlet. I will also enclose a picture of all this manliness because you may've forgotten what I look like. :)
Well, until my next post, continue to cherish every moment of those around you and never forget that everything happens for a reason. You're on A DAY IN THE LIFE, with me
Michael Mcthune #546064
OSCI Box 3310
Oshkos, WI 54903
Links to check out things I'm working on: http://www.facebook.com/weare1company
Gofundme account: http://www.gofundme.com/author-in-need-of-assistance.
We will have any info you're looking for on here concerning the projects we're doing and how things have been. Any feedback you would like to share or simply ask how you could help, it will all be available here. Thanks again for your support of someone trying to make good on a bad past!