Reply ✍ Transcribed
From a day in the life by Michael McThune (author's profile)
Share this:
uploaded April 1, 2018.  Original (PDF) 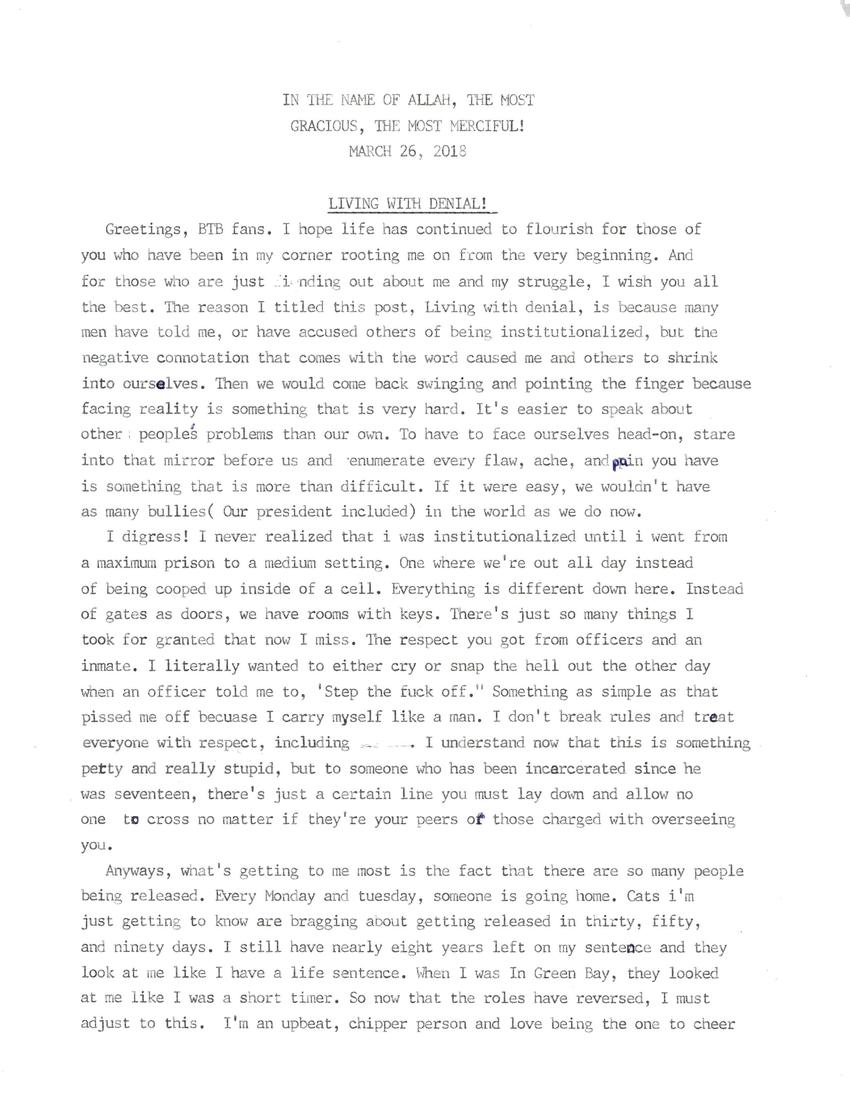 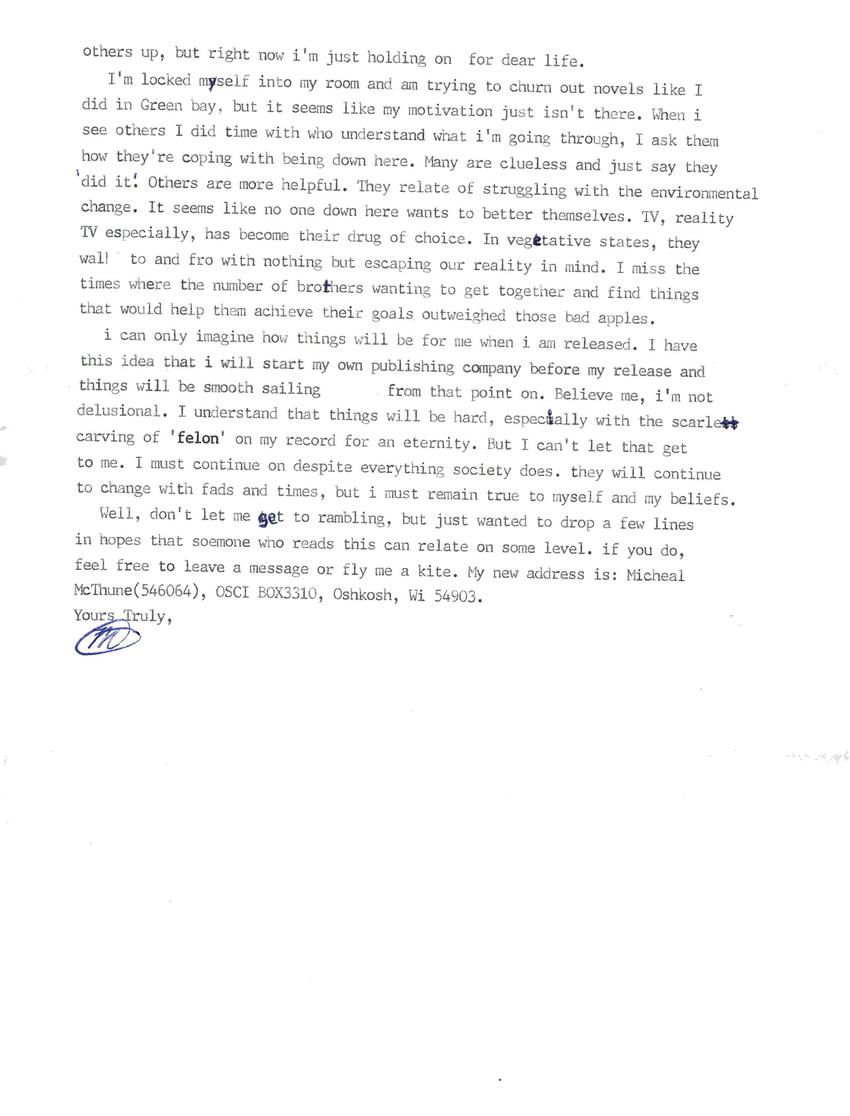 I hope life has continued to flourish for those of you who have been in my corner rooting me on from the very beginning. And for those who are just finding out about me and my struggle, I wish you all the best.

The reason I titled this post is because many men have told me, or have accused others of being institutionalized, but the negative connotation that comes with the word caused me and others to shrink into ourselves. Then we would come back swinging and pointing the finger because facing reality is something that is very hard. It's easier to speak about other people's problems than our own. To have to face ourselves head-on, stare into that mirror before us, and enumerate every flaw, ache, and pain you have is something that is more than difficult. If it were easy, we wouldn't have as many bullies (our president included) in the world as we do now.

I never realized that I was institutionalized until I went from a maximum prison to a medium setting. One where we're out all day instead of being cooped up inside of a cell. Everything is different down here. Instead of gates as doors, we have rooms with keys. There's just so many things I took for granted that now I miss.

The respect you got from officers and an inmate. I literally wanted to either cry or snap the hell out the other day when an officer told me to, "Step the fuck off." Something as simple as that pissed me off because I carry myself like a man. I don't break rules and treat everyone with respect, including [redacted]. I understand now that this is something petty and really stupid, but to someone who has been incarcerated since he was seventeen, there's just a certain line you must lay down and allow no one to cross, no matter if they're your peers or those charged with overseeing you.

Anyways, what's getting to me most is the fact that there are so many people being released. Every Monday and Tuesday, someone is going home. Cats I'm just getting to know are bragging about getting released in thirty, fifty, and ninety days. I still have nearly eight years left on my sentence and they look at me like I have a life sentence. When I was in Green Bay, they looked at me like I was a short timer. So now that the roles have reversed, I must adjust to this.

I'm an upbeat, chipper person and love being the one to cheer others up, but right now I'm just holding on for dear life.

I've locked myself into my room and am trying to churn out novels like I did in Green Bay, but it seems like my motivation just isn't there. When I see others I did time with who understood what I'm going through, I ask them how they're coping with being down here. Many are clueless and just say they "did it." Others are more helpful. They relate of struggling with the environmental change.

It seems like no one here wants to better themselves. TV, reality TV especially, has become their drug of choice. In vegetative states, they walk to and fro with nothing but escaping our reality in mind. I miss the times where the number of brothers wanting to get together and find things that would help them achieve their goals outweighed those and apples.

I can only imagine how things will be for me when I am released. I have this idea that I will start my own publishing company before my release and things will be smooth sailing from that point on. Believe me, I'm not delusional. I understand that things will be hard, especially with the scarlet carving of "felon" on my record for eternity, but I can't let that get to me. I must continue on despite everything society does. They will continue to change with fads and times, but I must remain true to myself and my beliefs.

Well, don't let me get to rambling. Just wanted to drop a few lines in hopes that someone who reads this can relate on some level. If you do, feel free to leave a message or fly me a kite.

My new address is: