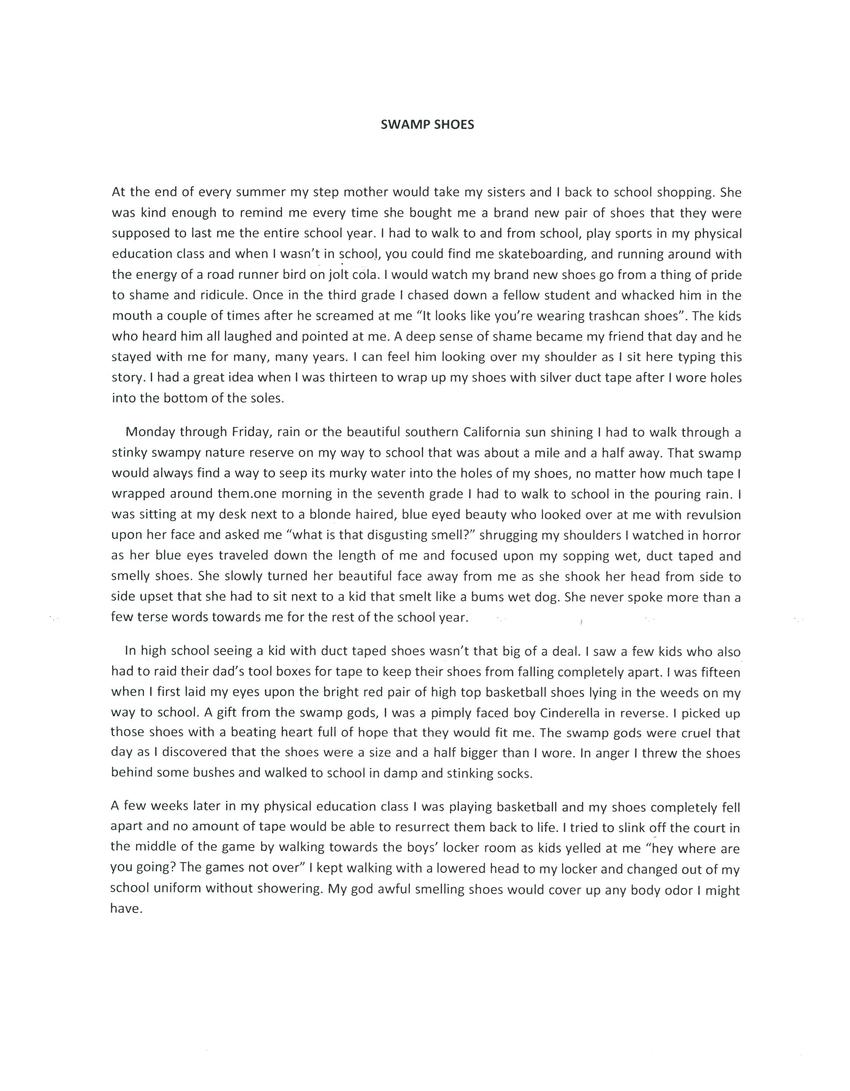 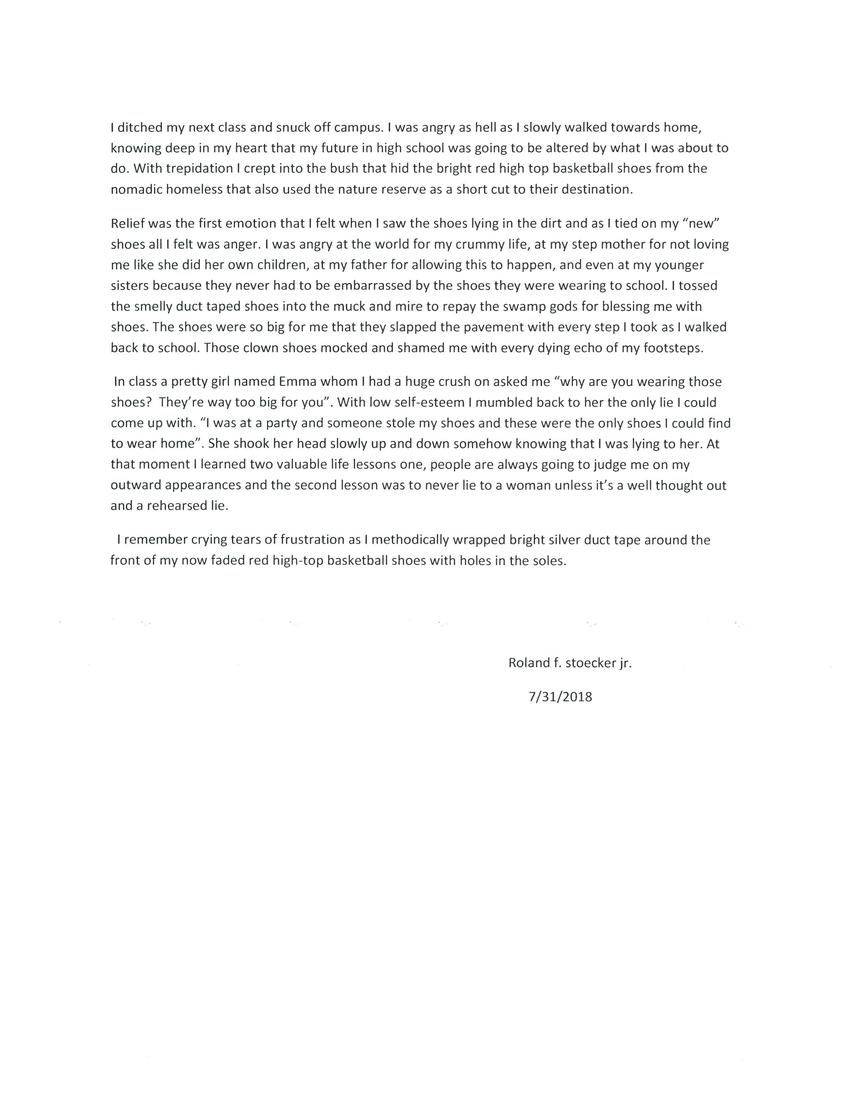 At the end of every summer, my stepmother would take my sisters and I back-to-school shopping. She was kind enough to remind me every time she bought me a brand new pair of shoes that they were supposed to last me the entire school year. I had to walk to and from school, play sports in my physical education class, and when I wasn't in school, you could find me skateboarding and running around with the energy of a roadrunner bird on Jolt cola.

I would watch my brand new shoes go from a thing of pride to shame and ridicule. Once in third grade, I chased down a fellow student and whacked him in the mouth a couple of times after he screamed at me, "It looks like you're wearing trashcan shoes." The kids who heard him all laughed and pointed at me. A deep sense of shame became my friend that day, and he stayed with me for many, many years. I can feel him looking over my shoulder as I sit here typing this story.

I had a great idea when I was thirteen to wrap up my shoes with silver duct tape after I wore holes into the bottom of the soles. Monday through Friday, rain or the beautiful southern California sun shining, I had to walk through a stinky swampy nature reserve on my way to school that was about a mile and a half away. That swamp would always find a way to seep its murky water into the holes of my shoes, no matter how much tape I wrapped around them.

One morning in the seventh grade, I had to walk to school in the pouring rain. I was sitting at my desk next to a blond-haired, blue-eyed beauty who looked over at me with revulsion on her face. She asked me, "What is that disgusting smell?" Shrugging my shoulders, I watched in horror as her blue eyes traveled down the length of me and focused on my sopping wet, duct-taped, smelly shoes. She slowly turned her beautiful face away from me as she shook her head, upset that she had to sit next to a kid that smelt like a bum's wet dog. She never spoke more than a few terse words towards me for the rest of the school year.

In high school, seeing a kid with duct taped shoes wasn't that big of a deal. I saw a few kids who also had to raid their dad's toolboxes for tape to keep their shoes from falling completely apart.

I was fifteen when I first laid my eyes upon the bright red pair of high-top baseball shoes lying in the weeds on my way to school. A gift from the swamp gods. I was a pimply-faced Cinderella boy in reverse. I picked up those shoes with a beating heart full of hope that they would fit me. The swamp gods were cruel that day. The shoes were a size and a half bigger than mine. In anger, I threw the shoes behind some bushes and walked to school in damp, stinking shoes.

A few weeks later in my physical education class, I was playing basketball and my shoes completely fell apart. No amount of tape would be able to resurrect them back to life. I tried to slink off the court in the middle of the game to the boys' locker room. The kids yelled at me, "Hey, where you going? The game's not over!" I kept walking with a lowered head to my locker and changed out of my school uniform without showering. My god awful smelling shoes would cover up any body odor I might have had.

I ditched my next class and snuck off campus. I was angry as hell on my slow walk home, knowing deep in my heart that my future in high school was going to be altered by what I was about to do. With trepidation, I crept into the bush that hid the bright red high-top basketball shoes from the nomadic homeless that also used the natural reserve as a shortcut.

Relief was the first emotion I felt when I saw the shoes still lying in the dirt. As I tied on my "new" shoes, I felt anger. I was angry at the world for my crummy life, at my stepmother for not loving me like her own children, at my father for allowing this to happen, and even at my younger sisters because they never had to be embarrassed by the shoes they were wearing to school. I tossed the smelly duct taped shoes into the muck and mire to repay the swamp gods with their blessing. The shoes were so big for me that they slapped the pavement with every step I took back to school. Those clown shoes mocked and shamed me with every dying echoing footstep.

In class, a pretty girl named Emma, whom I had a huge crush on, asked me, "Why are you wearing those shoes? They're way too big for you." With low self-esteem, I mumbled back to her the only lie I could come up with, "I was at a party and someone stole my shoes. These were the only shoes I could find to wear home." She slowly nodded her head, somehow knowing that I was lying to her.

At that moment, I learned two valuable life lessons. One, people are always going to judge me on my outward appearance and two, never lie to a woman unless it's a well thought and rehearsed lie.

I remember crying tears of frustration as I methodically wrapped bright silver duct tape around the front of my now faded red high-top basketball shoes with holes in the soles.

Swamp shoes was the first writings I had heard from you. And am glad to have found and read your other blogs.

It was beautiful and heart wrenching all at the same time. I’m sorry that this has stuck with you, you deserved better.

You have a talent, keep writing.

I will be looking out. 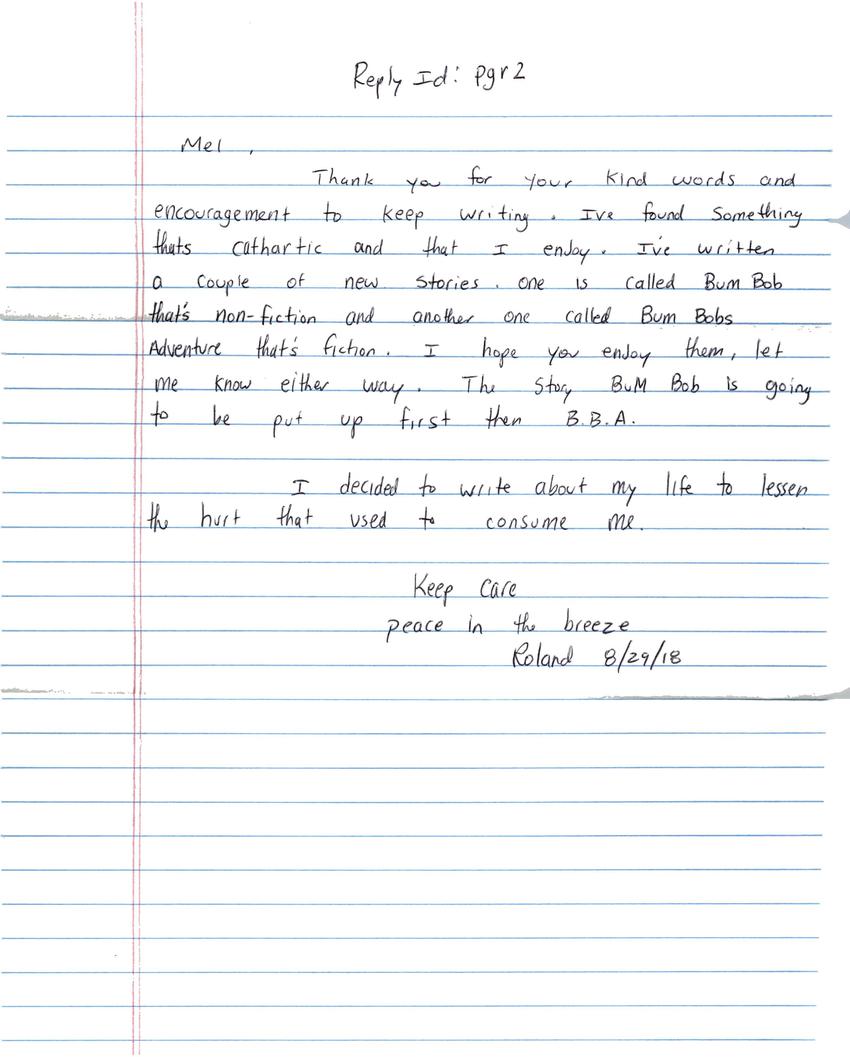 Bravo! You can write boy! You’re words come alive the way you put them together. Through all this pain and suffering, you truly create beauty. God has given you a gift. Keep going.
(scanned reply – view as blog post)
uploaded Oct. 11, 2018.  Original (PDF) 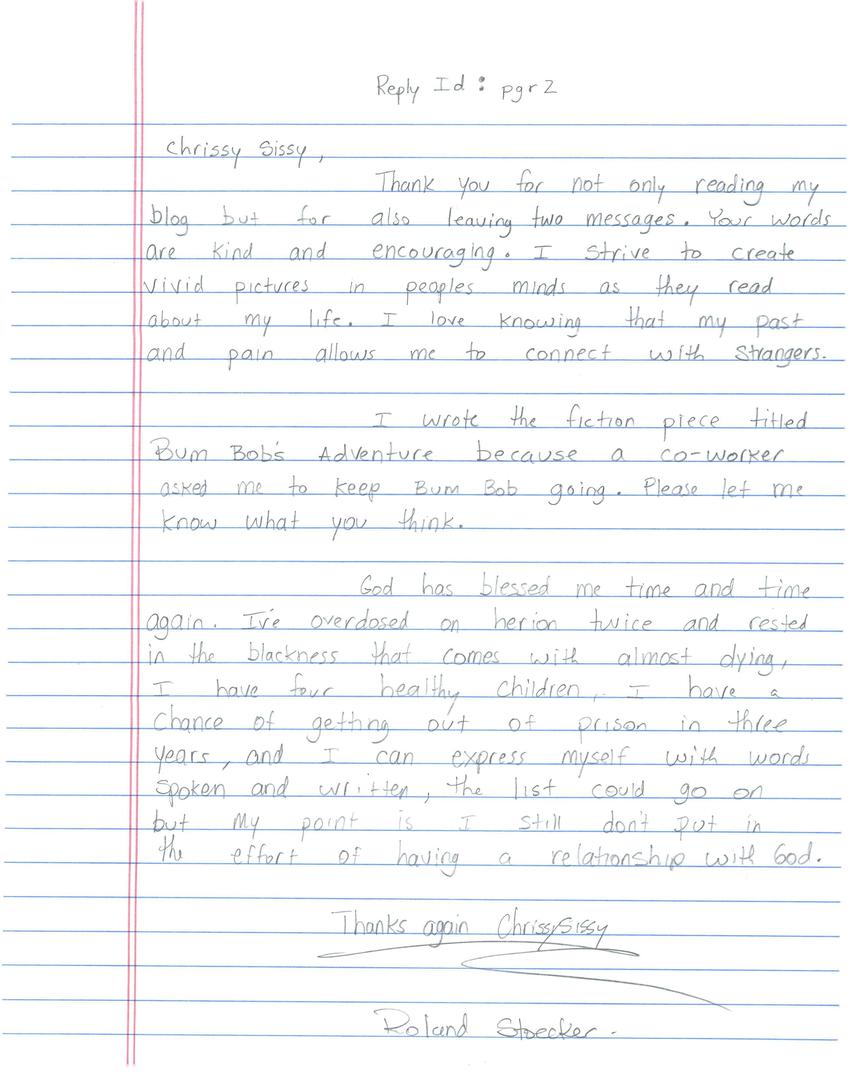