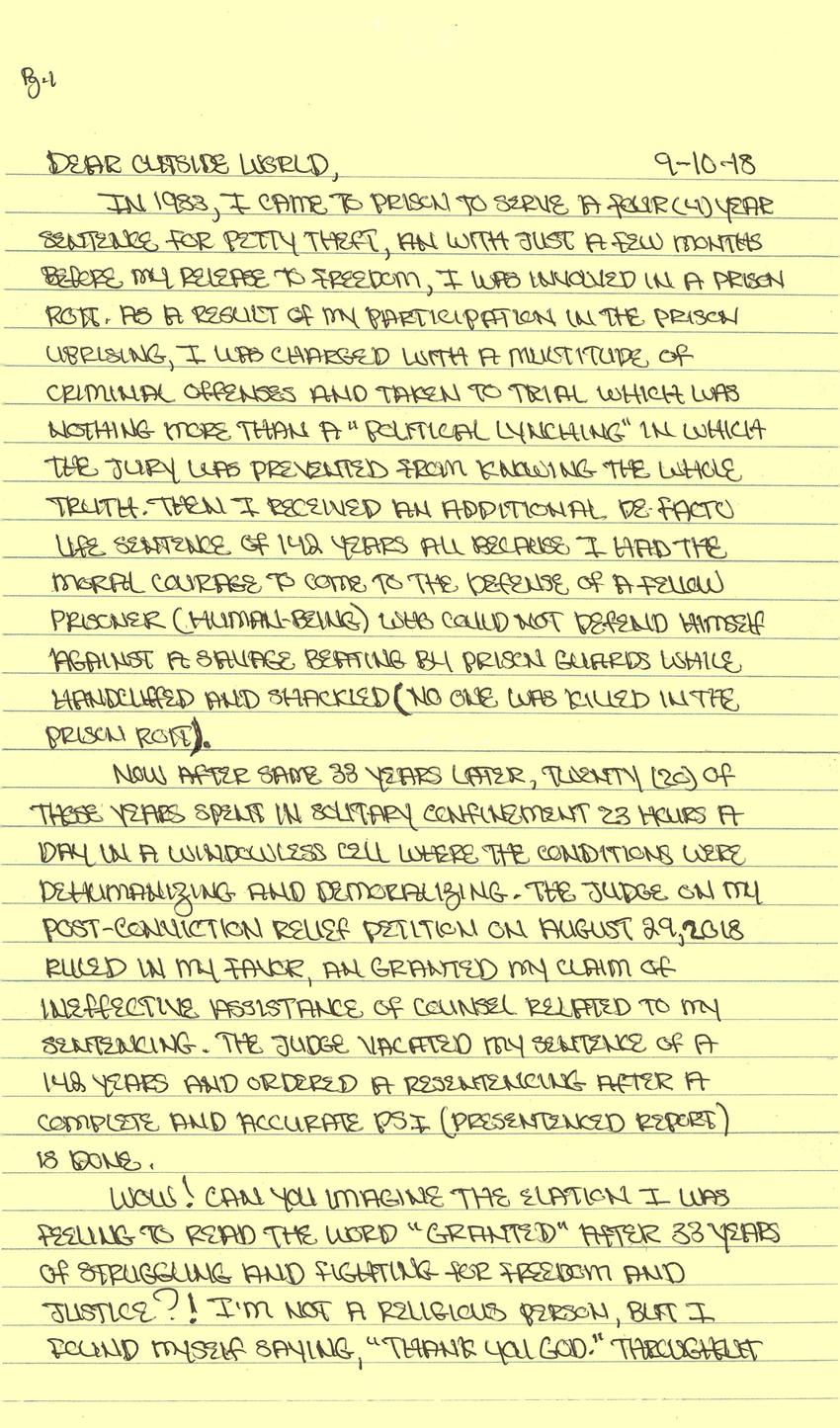 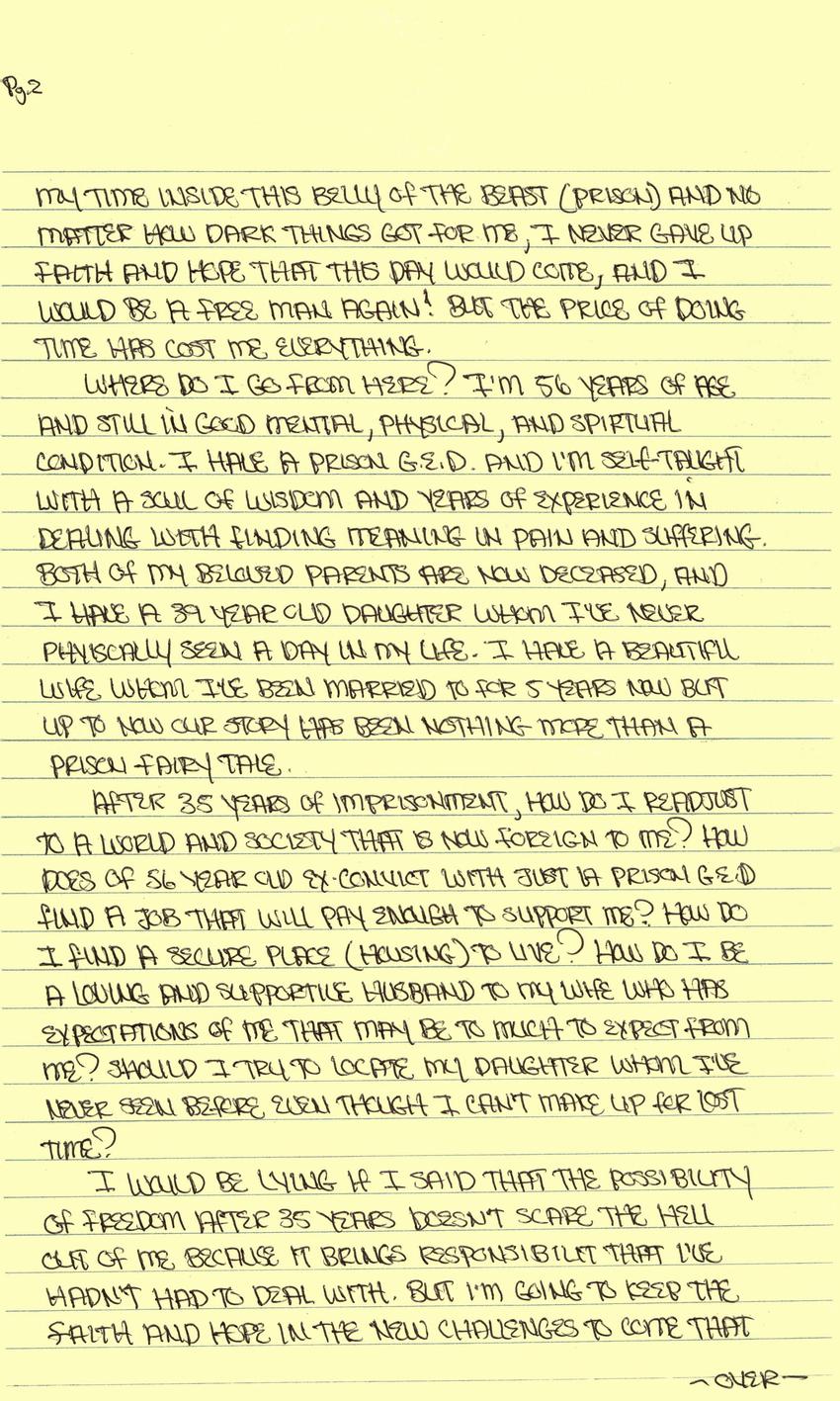 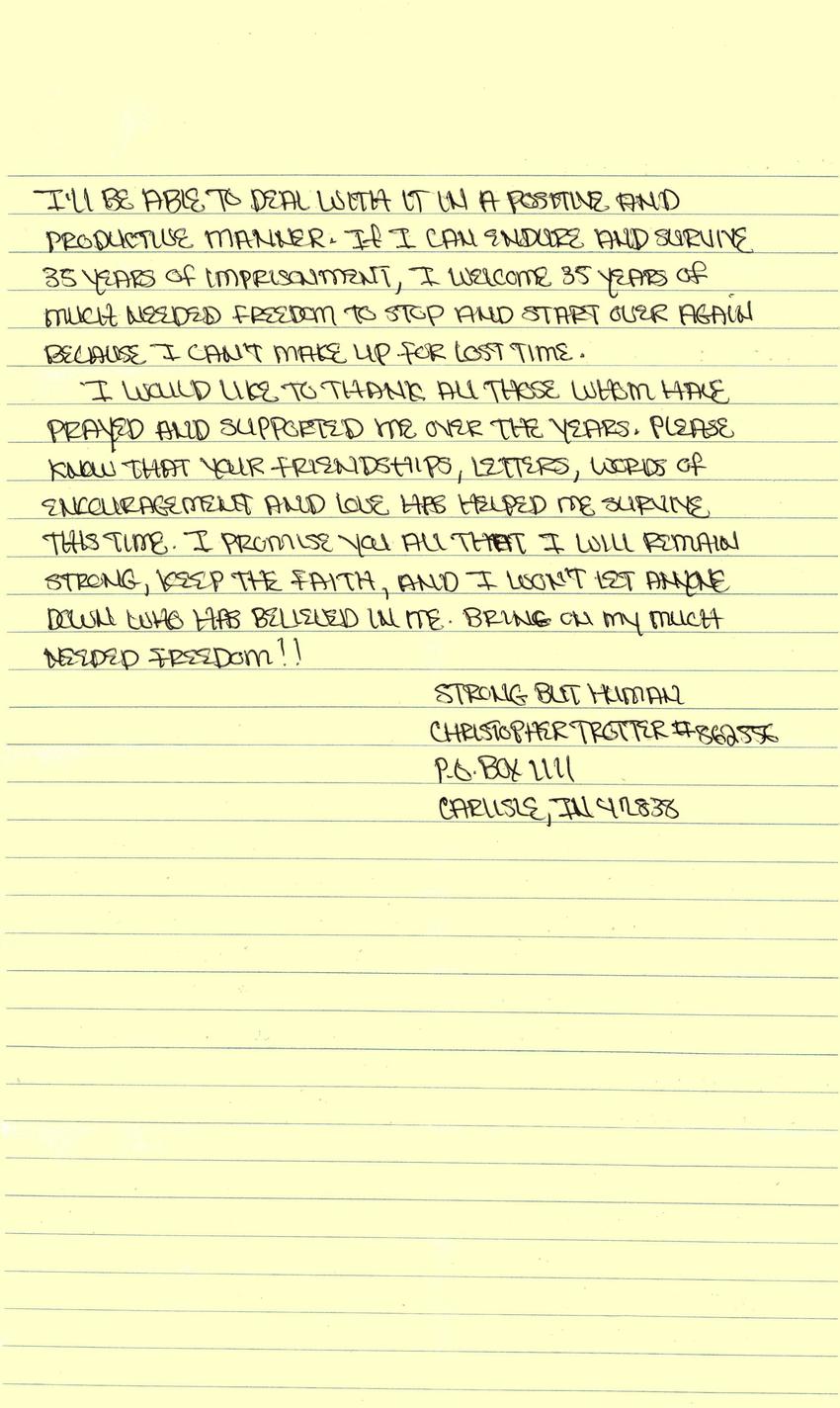 Dear Outside World,
In 1983, I came to prison to serve a four year sentence for petty theft. With just a few months before my release to freedom, I was involved in a prison riot. As a result of my participation in the prison uprising, I was charged with a multitude of criminal offenses and taken to trial, which was nothing more than a political lynching in which the jury was prevented from knowing the whole truth. Then I received an additional de-facto life sentence of 142 years all because I had the moral courage to come to the defense of a fellow prisoner (a human being) who could not defend himself against a savage beating by prison guards while he was handcuffed and shackled. No one was killed in the prison riot.

Now, after some 33 years later, twenty of these years spent in solitary confinement, 23 hours a day, in a windowless cell where the conditions were dehumanizing and demoralizing. The judge on my post-conviction relief petition ruled in my favor on August 29, 2018 and granted my claim of ineffective assistance of counsel related to my sentencing. The judge vacated my sentence of a 142 years and ordered a re-sentencing after a complete and accurate PSI (presented report) is done.

Wow! Can you imagine the elation I was feeling to read the word "granted" after 33 years of struggling and fighting for freedom and justice!? I'm not a religious person, but I found myself saying, "Thank you God."

Throughout my time inside this belly of the beast (prison) and, no matter how dark things got for me, I never gave up faith and hope that this day would come, and that I would be a free man again! But the price of doing time has cost me everything.

Where do I go from here? I'm 56 years of age and still in good mental, physical, and spiritual condition. I have a prison GED and I'm self-taught with a soul of wisdom and years of experience in dealing with finding meaning in pain and suffering. I have a 39-year-old daughter whom I've never physically seen a day in my life. I have a beautiful wife whom I've been married to for five years now but, up to now, our story has been nothing more than a prison fairytale.

After 35 years of imprisonment, how do I readjust to a world and society that is now foreign to me? How does a 56-year-old ex-convict with just a prison GED find a job that will pay enough to support me? How do I find a secure place (housing) to live? How do I be a loving and supportive husband to my wife who has expectations of me that may be too much to expect from me? Should I try to locate my daughter whom I've never seen before, even though I can't make up for lost time?

I would be lying if I said that the possibility of freedom after 35 years doesn't scare the hell out of me because it brings responsibility that I've hadn't had to deal with. But I'm going to keep the faith and hope in the new challenges to come that I'll be able to deal with it in a positive and productive manner. If I can endure and survive 35 years of imprisonment, I welcome 35 years of much needed freedom to stop and start over again because I can't make up for lost time.

I would like to thank all those whom have prayed and supported me over the years. Please know that your friendships, letters, words of encouragement and love have helped me survive this time. I promise you all that I will remain strong, keep the faith, and I won't let anyone down who has believed in me. Bring on my much needed freedom!

Congratulations on your reduced sentence and impeding freedom!

If you need help, try to get in touch with Benny Lee of National Alliance for the Empowerment of the Formerly Incarcerated (NAEFI). NAEFI is a non-profit that promotes a healthy transition into society through mentoring and moral support.

Here's some contact information for his non-profit if you want to try to get some early help and support:

Even if he's in Chicago, he will try to help anyone who has been formerly incarcerated.

From one stranger to another, I'm hoping for the best for you and your loved ones.