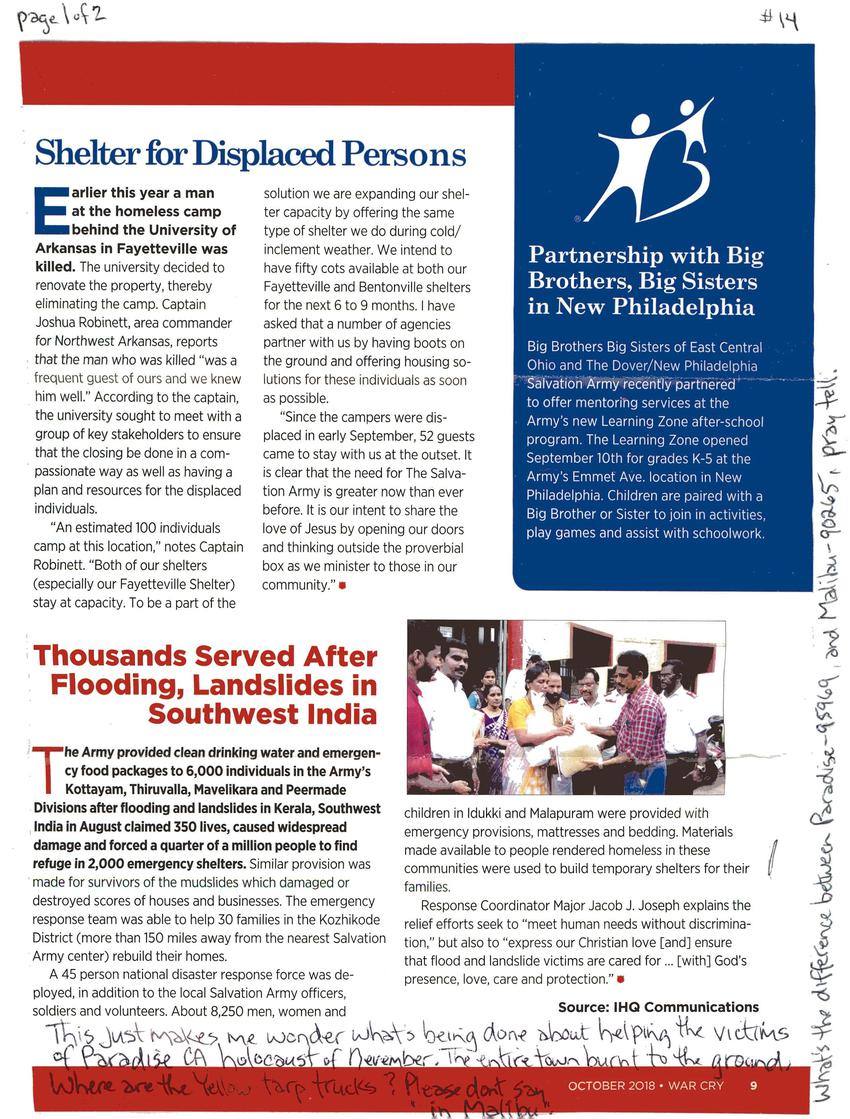 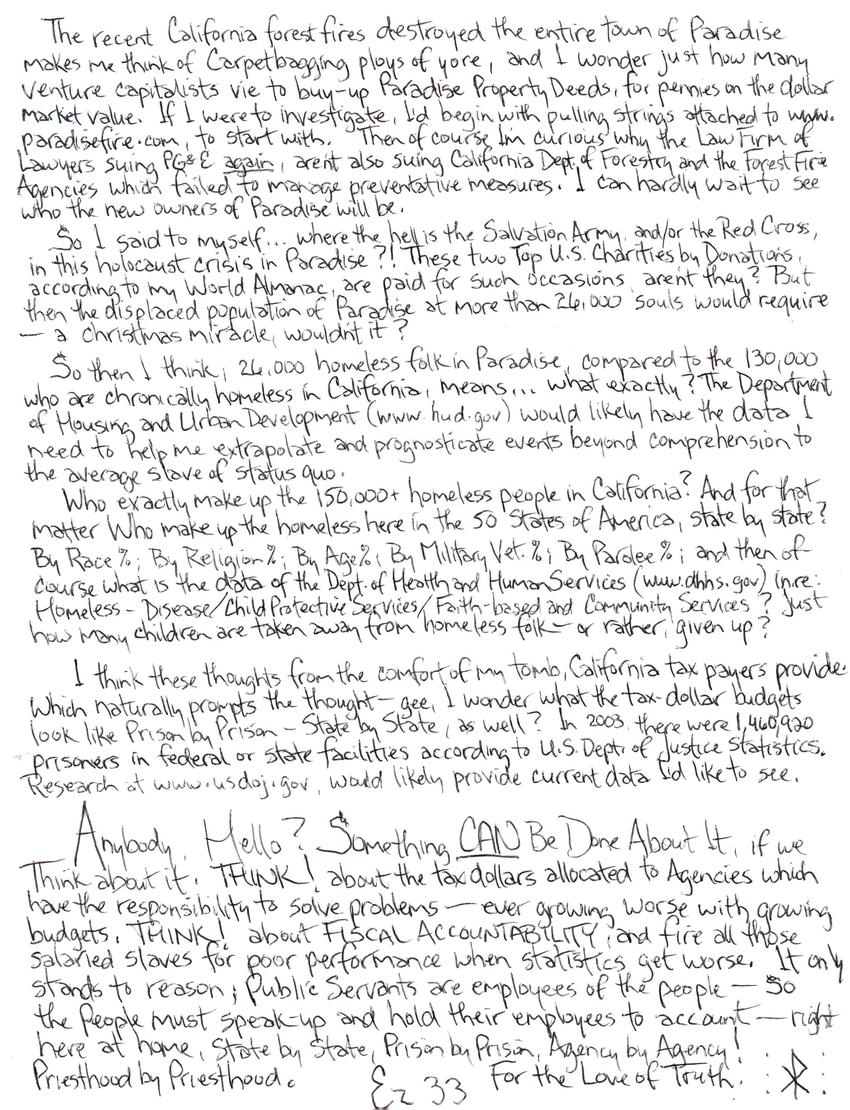 Earlier this year a man at the homeless camp behind the University of Arkansas in Fayetteville was killed. The university decided to renovate the property, thereby eliminating the camp. Captain Joshua Robinett, area commander for Northwest Arkansas, reports that the man who was killed "was a frequent guest of ours and we knew him well." According to the captain, the university sought to meet with a group of key stakeholders to ensure that the closing be done in a compassionate way as well as having a plan and resources for the displaced individuals.
"An estimated 100 individuals camp at this location," notes Captain Robinett. "Both of our shelters (especially our Fayetteville Shelter) stay at capacity. To be a part of the solution we are expanding our shelter capacity by offering the same type of shelter we do during cold/inclement weather. We intend to have fifty cots available at both out Fayetteville and Bentonville shelters for the next 6 to 9 months. I have asked that a number of agencies partner with us by having boots on the ground and offering housing solutions for these individuals as soon as possible.
"Since the campers were displaced in early September, 52 guests came to stay with us at the outset. It is clear that the need for The Salvation Army is greater now than ever before. It is our intent to share the love of Jesus by opening our doors and thinking outside the proverbial box as we minister to those in our community."

The Army provided clean drinking water and emergency food packages to 6,000 individuals in the Army's Kottayam, Thiruvalla, Mavelikara and Peermade Divisions after flooding and landslides in Kerala, Southwest India in August claimed 350 lives, caused widespread damage and forced a quarter of a million people to find refuge in 2,000 emergency shelters. Similar provision was made for survivors of the mudslides which damaged or destroyed scores of houses and businesses. The emergency response team was able to help 30 families in the Kozhikode District (more that 150 miles away from the nearest Salvation Army center) rebuild their homes.
A 45 person national disaster response force was deployed, in addition to the local Salvation Army officers, soldiers and volunteers. About 8,250 men, women and children in Idukki and Malapuram were provided with emergency provisions, mattresses and bedding. Materials made available to people rendered homeless in these communities were used to build temporary shelters for their families.
Response Coordinator Major Jacob J. Joseph explains the relief efforts seek to "meet human needs without discrimination," but also to "express our Christian love [and] ensure that flood and landslide victims are cared for... [with] God's presence, love, care and protection."

This just makes me wonder what's being done about helping the victims of Paradise CA holocaust of November. The entire town burnt to the ground, Where are the yellow tarp trucks? Please don't say "in Malibu".

The recent California forest fires destroyed the entire town of Paradise makes me think og carpetbagging plots of yore, and I wonder just how many venture capitalists vie to buy-up Paradise Property Deeds, for pennis on the dollar market value. If I were to investigate, I'd begin with pulling strings attached to www.paradisefire.com, to start with. Then of course I'm curious why the Law Firm of Lawyers suing PG&E again, aren't also suing California Dept of Frestry and the Forest Fire Agencies which failed to manage preventative measures. I can hardly waitt o see who the new owners of Paradise will be.
So I said to myself...where the hell is the Salvation Army and/or the Red Cross in this holocaust crsis in Paradise?! These two Top U.S charities by Donations, according to my World Almanac, are paid for such occasions, aren't they? But then the displaced population of Paradise at more than 26,000 souls would require - a christmas miracle, wouldn't it?
So then I think, 26,000 homeless folk in Paradise, compared to the 130,000 who are chronically homeless in California, means...what exactly? The Department of Housing and Urban Development (Www.hud.gov) would likely have the data I need to help me extrapolate and prognosticate events beyond comprehension to the average slave of status quo.
Who exactly make up the 150,000+ homeless people in California? And for that matter who make up the homeless here in the 50 states of America, state by state? By race %; By Religion %; By Age %; By Military Vet %; By Parolee %; and then of course what is the data of the Dept. of Health and Human Service (222.dhhs.gov) in re: Homeless - Disease/Child Protective Services/Faith-based and Community Services? Just how many children are taken away from homeless folk - or rather, give up?

I think these thoughts from the comfort of my tomb, California tax payers provide which naturally prompts the thought - gee, I wonder what the tax-dollar budgets look like Prison by Prison - State by State, as well? In 2003, there were 1,460,920 prisoners in federal or state facilities according to U.S. Dept. of Justice Statstics. Research at www.usdoj.gov, would likely provide current data I'd like to see.

Anybody? Hello? Something CAN be done about it, if we think about it. THINK! about the tax dollars allocated to Agencies which have the responsibility to solve problems - ever growing worse with growing budgets. THINK! about FISCAL ACCOUNTABILITY and fire all those salaried slaves for poor performance when statistics get worse. It only stands to reason; Public Servants are employees of the people - so the people must speak-up and hold their employees to account - right here at home, State by State, Prison by Prison, Agency by Agency! Priesthood by Priesthood.

EX 33 For the Love of Truth