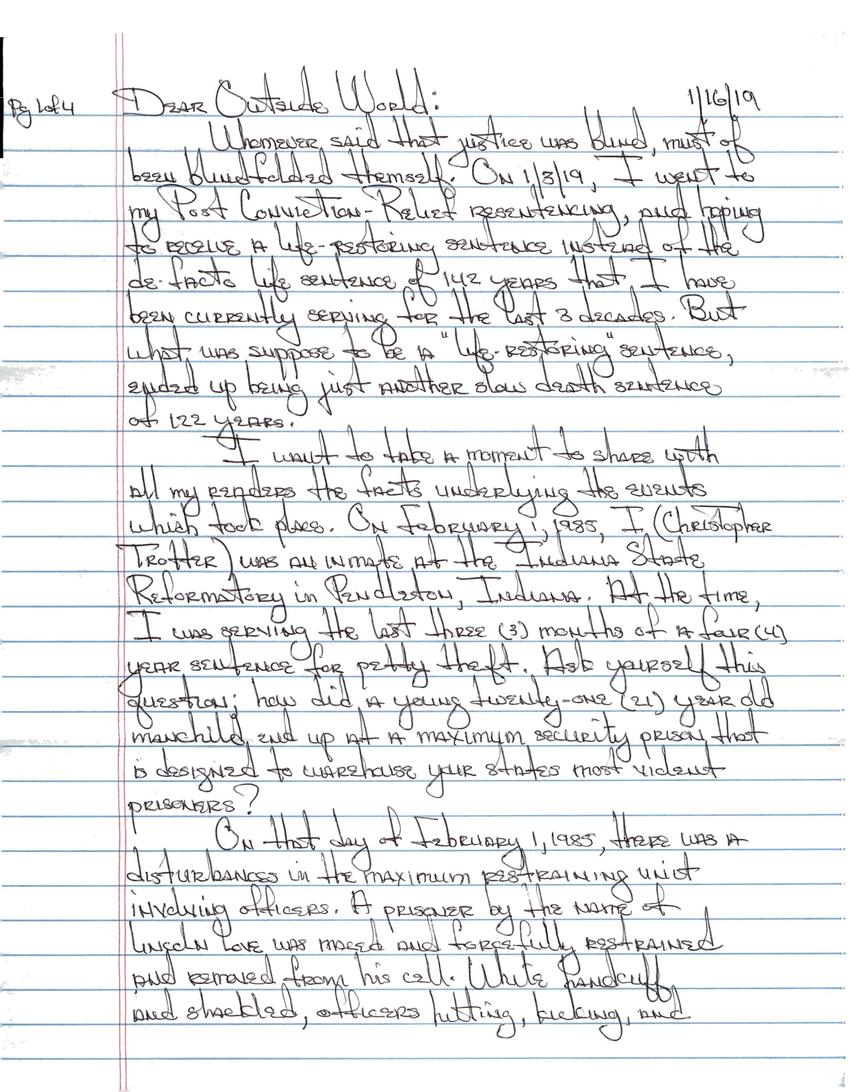 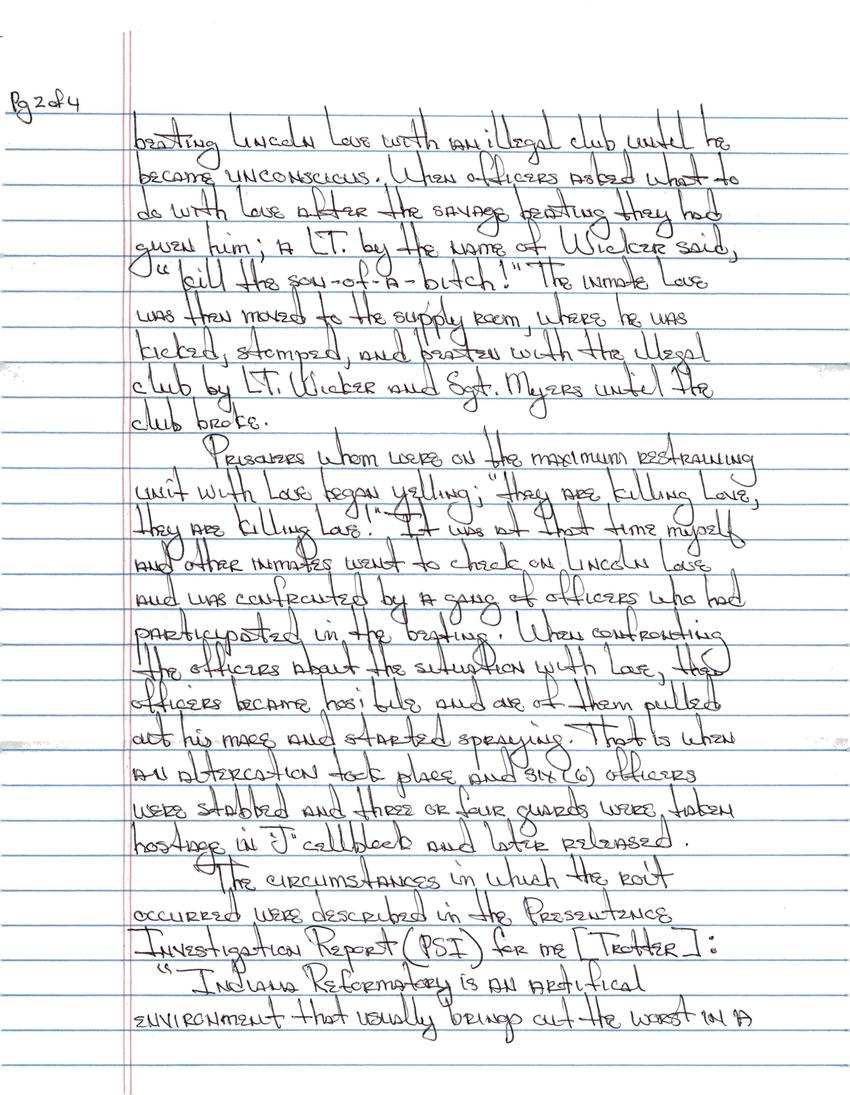 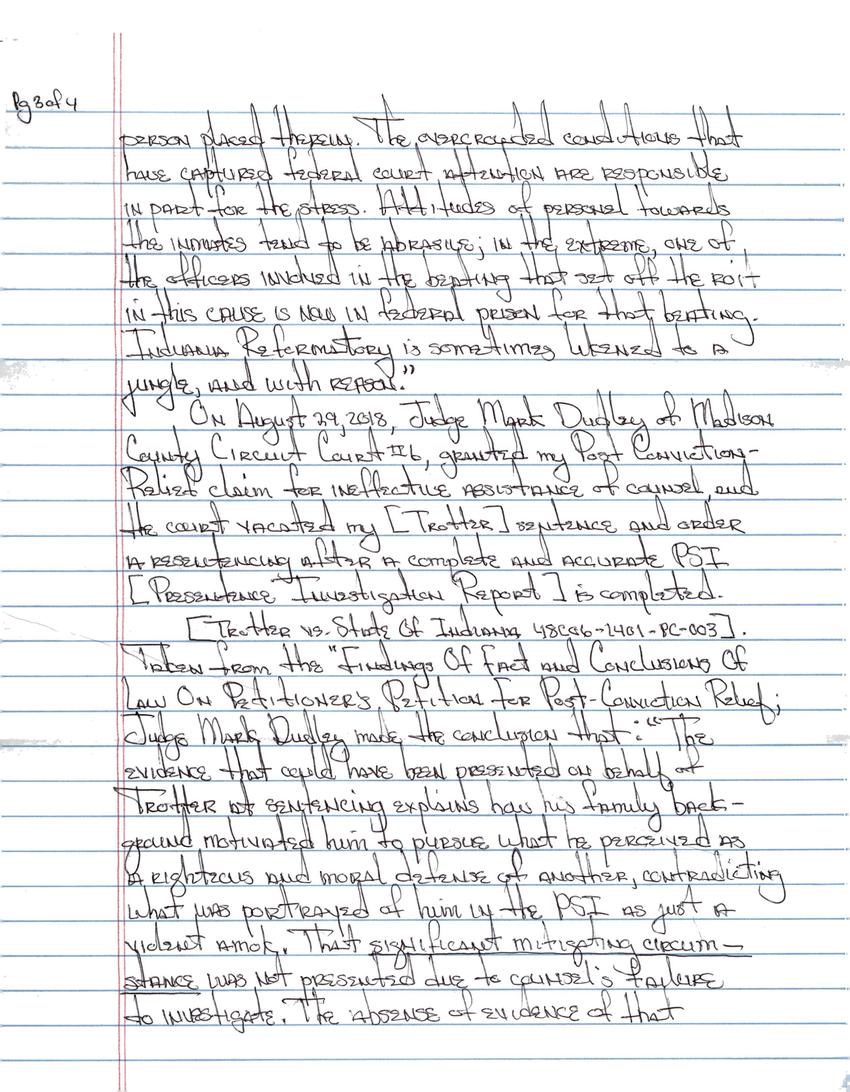 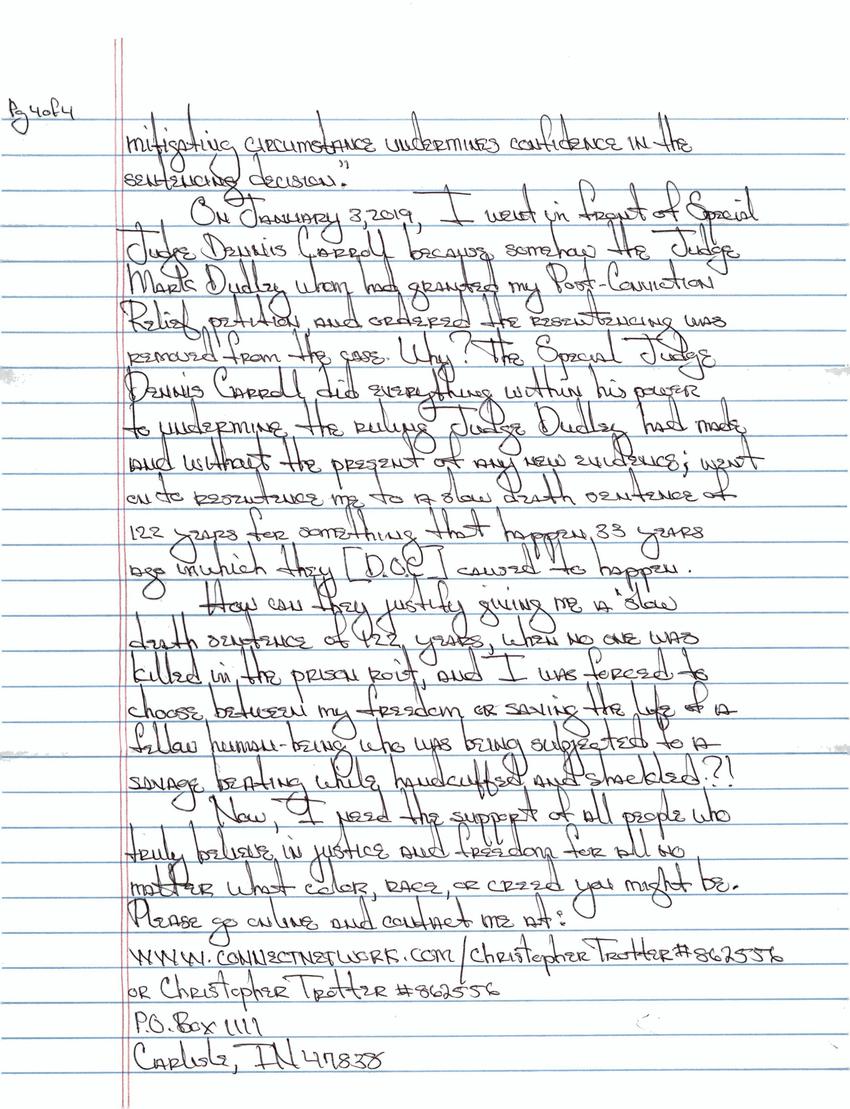 Dear Outside World:
Whomever said that justice was blind must of been blindfolded themselves. On 1/8/19, I went to my post conviction-relief resentencing and hoping to receive a life-restoring sentence instead of the de-facto life sentence of 142 years that I have been currently serving for the last three decades. But what was supposed to be a "life-restoring" sentence ended up being just another slow death sentence of 122 years.

I want to take a moment to share with all my readers the facts underlying the events which took place. On February 1, 1985, I, Christopher Trotter, was an inmate at the Indiana State Reformatory in Pendleton, Indiana. AT the time, I was serving the last three months of a four year sentence for petty theft. Ask yourself this question: how did a young twenty-one year old manchild end up at a maximum security prison that is designed to warehouse your state's most violent prisoners?

On that day of February 1, 1985, there was a disturbance in the maximum restraining unit involving officers. A prisoner by the name of Lincoln Love was maced and forcefully restrained and removed from his cell. While handcuffed and shackled, officers hitting, kicking, and beating Lincoln Love with an illegal club until he became unconscious. When officers asked what to do with Love after the savage beating they had given him, a Lt. by the name of Wicker said, "Kill the son of a bitch!" The inmate, Love, was then moved to the supply room where he was kicked, stomped, and beaten with the illegal club by Lt. Wicker and Sgt. Myers until the club broke.

Prisoners whom were in the maximum restraining unit with Love began yelling, "They are killing Love! They are killing Love!" It was at that time, myself and other inmates went to check on Lincoln Love and was confronted by a gang of officers who had participated in the beating. When confronting the officers about the situation with Love, the officers became hostile and one of them pulled out his mace and started spraying. That is when an altercation took place and six officers were stabbed. Three or four guards were taken hostage in "J" cellblock and later released.

The circumstances in which the riot occurred were described in the Pre-sentence Investigation Report (PSI) for me, Trotter: "Inmate reformatory is an artificial environment that usually brings out the worst in a person placed therein. The overcrowded conditions that have captured federal court attention were responsible in part for the stress. Attitudes of personel towards the inmates involved in the beating that set off the riot in this case is now in federal prison for that beating. Indiana Reformatory is sometimes likened to a jungle,and with repeal."

On August 29, 2018, Judge Mark Dudley of Madison County Circuit Court #6 granted my post-conviction relief claim for ineffective assistance of counsel and the court vacated my sentence and ordered a resentencing after a complete and accurate PSI is completed.

Taken from the "findings of facts and conclusions of law on petitioner's petition for post-conviction relief", Judge Mark Dudley made the conclusion that: "The evidence that could have been presented on behalf of Trotter at sentencing explains how his family background motivated him to pursue what he perceived as a righteous and moral defense of another, contradicting what was portrayed of him in the PSI as just a violent amok. That significant mitigating circumstance was not presented due to counsel's failure to investigate. The absence of evidence of that mitigating circumstance undermines confidence in the sentencing decision."

On January 3, 2019, I went in front of Special Judge Dennis Carroll because somehow Judge Mark Dudely, whom had granted my post-conviction relief petition and ordered the resentencing, was removed from the case. Why? Special Judge Dennis Carroll did everything within his power to undermine the ruling Judge Dudley had made and without the present of any new evidence. Went on to resentence me to a slow death sentence of 122 years for something that happened 33 years ago, in which they, the DOC, caused to happen.

How can they justify giving me a slow death sentence of 122 years when no one was killed in the prison riot, and I was forced to choose between my freedom or saving the life of a fellow human being who was being subjected to a savage beating while he was handcuffed and shackled!?

Now, I need the support of all people who truly believe in justice and freedom for all, no matter what color, race, or creed you might be.

Or write me at: