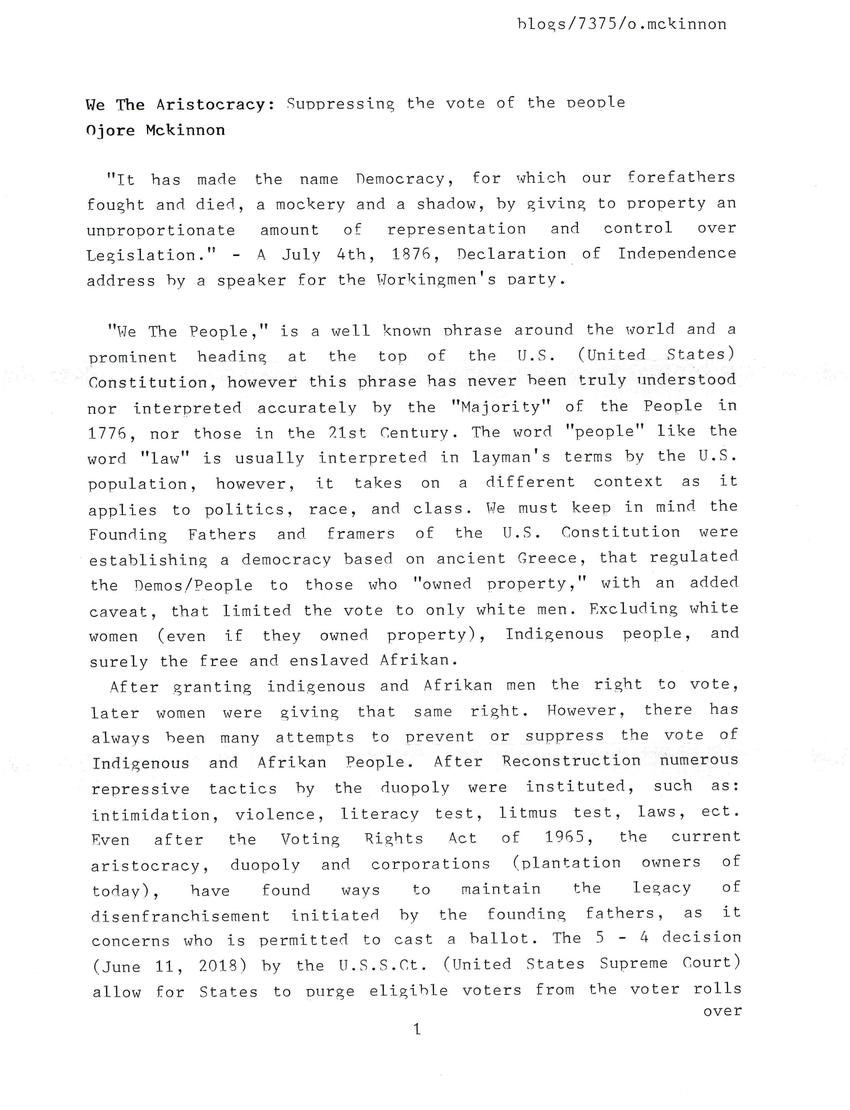 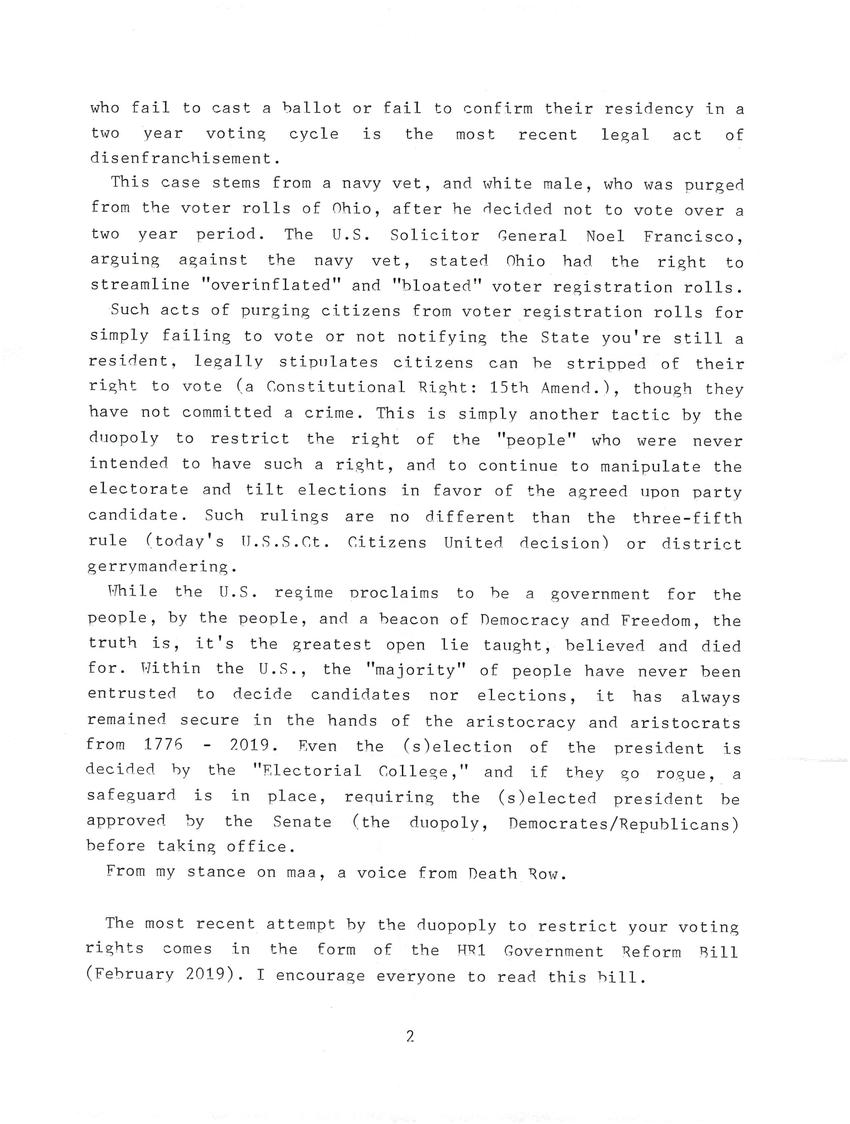 We The Aristocracy: Suppressing the vote of the people
Ojore Mckinnon

"It has made the name Democracy, for which our forefathers fought and died, a mockery and a shadow, by giving to property an unproportionate amount of representation and control over Legislation." - A July 4th, 1876, Declaration of Independence address by a speaker for the Workingmen's party.

"We The People," is a well known phrase around the world and a prominent heading at the top of the U.S. (United States) Constitution, however this phrase has never been truly understood nor interpreted accurately by the "Majority" of the People in 1776, nor those in the 21st Century. The word "people" like the word "law" is usually interpreted in layman's terms by the U.S. population, however, it takes on a different context as it applies to politics, race, and class. We must keep in mind the Founding Fathers and framers of the U.S. Constitution were establishing a democracy based on ancient Greece, that regulated the Demos/People to those who "owned property," with an added caveat, that limited the vote to only white men. Excluding white women (even if they owned property), Indigenous people, and surely the free and enslaved Afrikan.

After granting indigenous and Afrikan men the right to vote, later women were giving that same right. However, there has always been many attempts to prevent or suppress the vote of Indigenous and Afrikan People. After Reconstruction numerous repressive tactics by the duopoly were instituted, such as: intimidation, violence, literacy test, litmus test, laws, ect. Even after the Voting Rights Act of 1965, the current aristocracy, duopoly and corporations (plantation owners of today), have found ways to maintain the legacy of disenfranchisement initiated by the founding fathers, as it concerns who is permitted to cast a ballot. The 5 - 4 decision (June 11, 2018) by the U.S.S.Ct. (United States Supreme Court) allow for States to purge eligible voters from the voter rolls [over] who fail to cast a ballot or fail to confirm their residency in a two year voting cycle is the most recent legal act of disenfranchisement.

This case stems from a navy vet, and white male, who was purged from the voter rolls of Ohio, after he decided not to vote over a two year period. The U.S. Solicitor General Noel Francisco, arguing against the navy vet, stated Ohio had the right to streamline "overinflated" and "bloated" voter registration rolls.

Such acts of purging citizens from voter registration rolls for simply failing to vote or not notifying the State you're still a resident, legally stipulates citizens can be stripped of their right to vote (a Constitutional Right: 15th Amend.) though they have not committed a crime. This is simply another tactic by the duopoly to restrict the right of the "people" who were never intended to have such a right, and to continue to manipulate the electorate and tilt elections in favor of the agreed upon party candidate. Such rulings are no different than the three-fifth rule (today's U.S.S.Ct. Citizens United decision) or district gerrymandering.

While the U.S. regime proclaims to be a government for the people, by the people, and a beacon of Democracy and Freedom, the truth is, it's the greatest open lie taught, believed and died for. Within the U.S., the "majority" of people have never been entrusted to decide candidates nor elections, it has always remained secure in the hands of the aristocracy and aristocrats from 1776 - 2019. Even the (s)election of the president is decided by the "Electorial College," and if they go rogue, a safeguard is in place, requiring the (s)elected president be approved by the Senate (the duopoly, Democrates/Republicans) before taking office.

From my stance on maa, a voice from Death Row.

The most recent attempt by the duopoly to restrict your voting rights comes in the form of the HR1 Government Reform Bill (February 2019). I encourage everyone to read this bill.