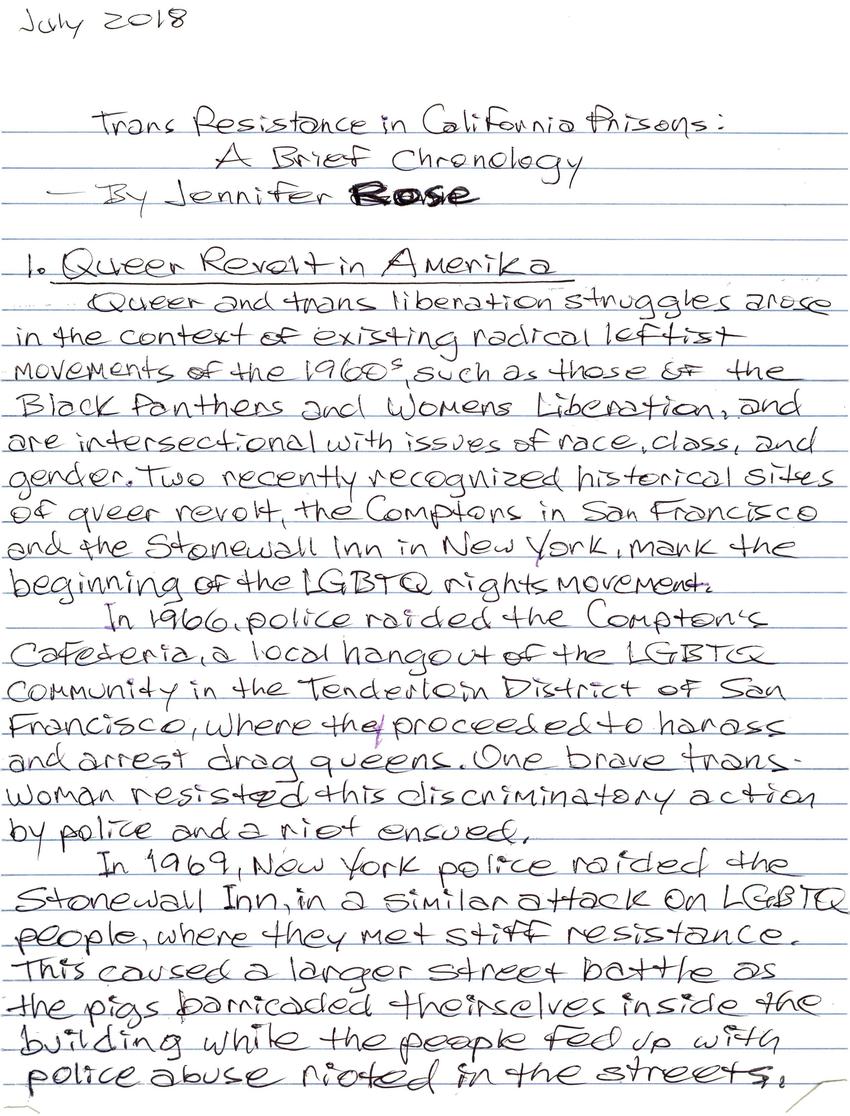 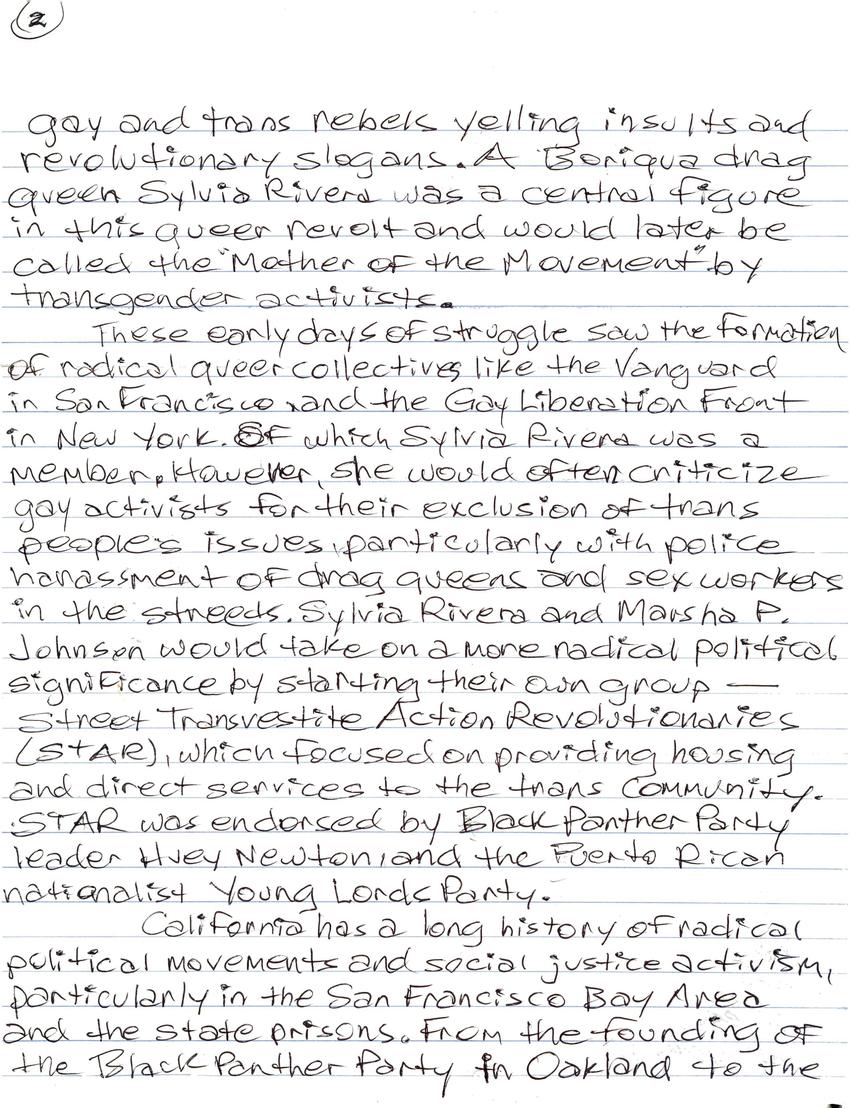 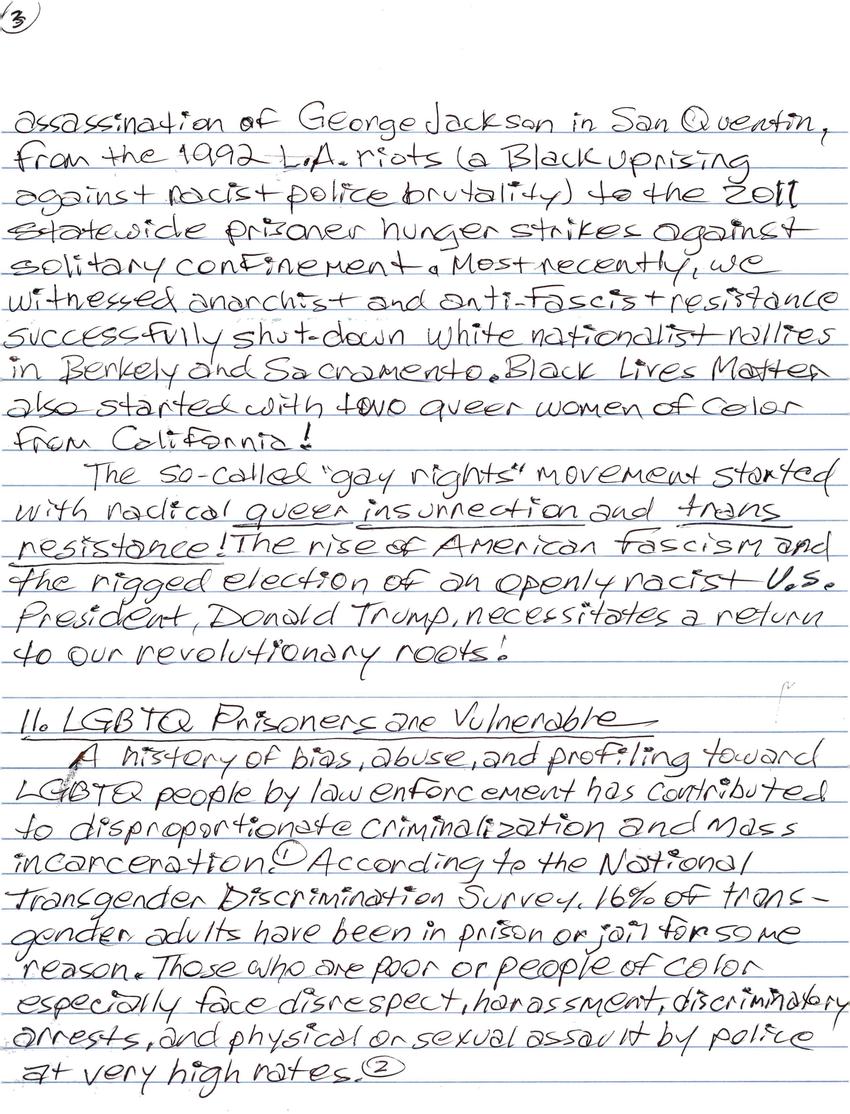 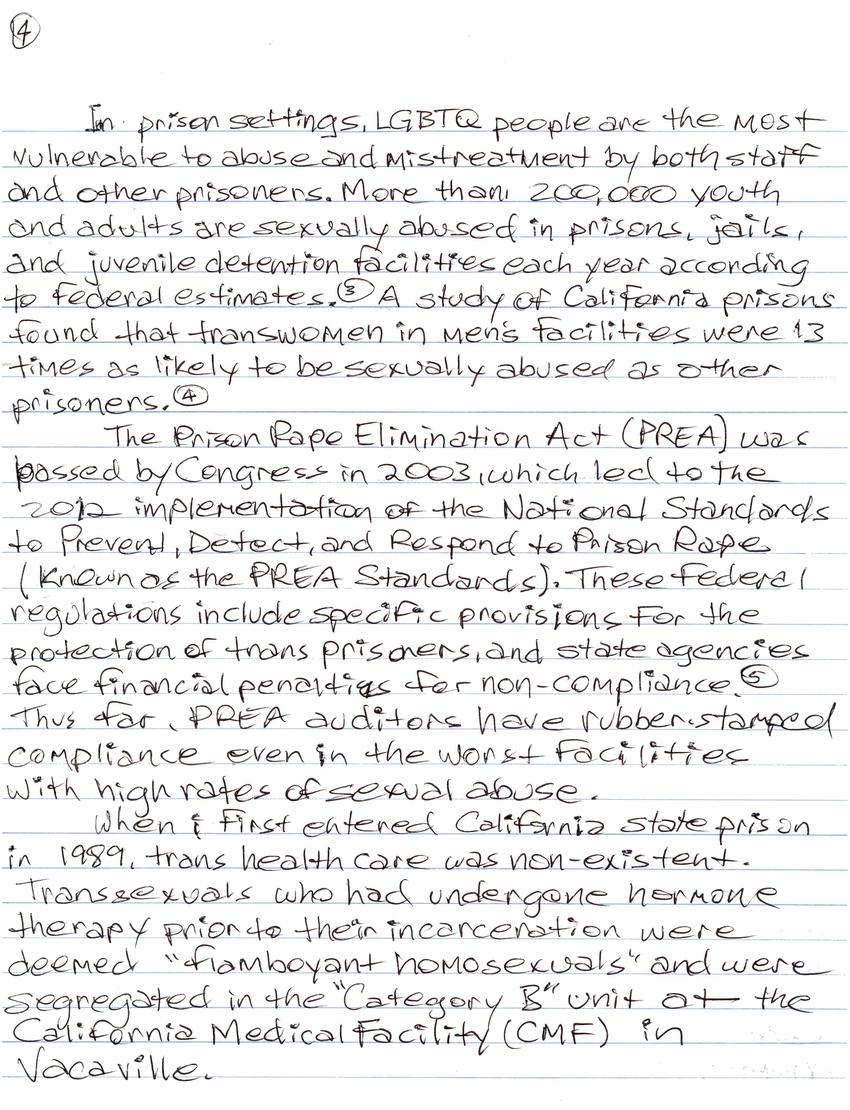 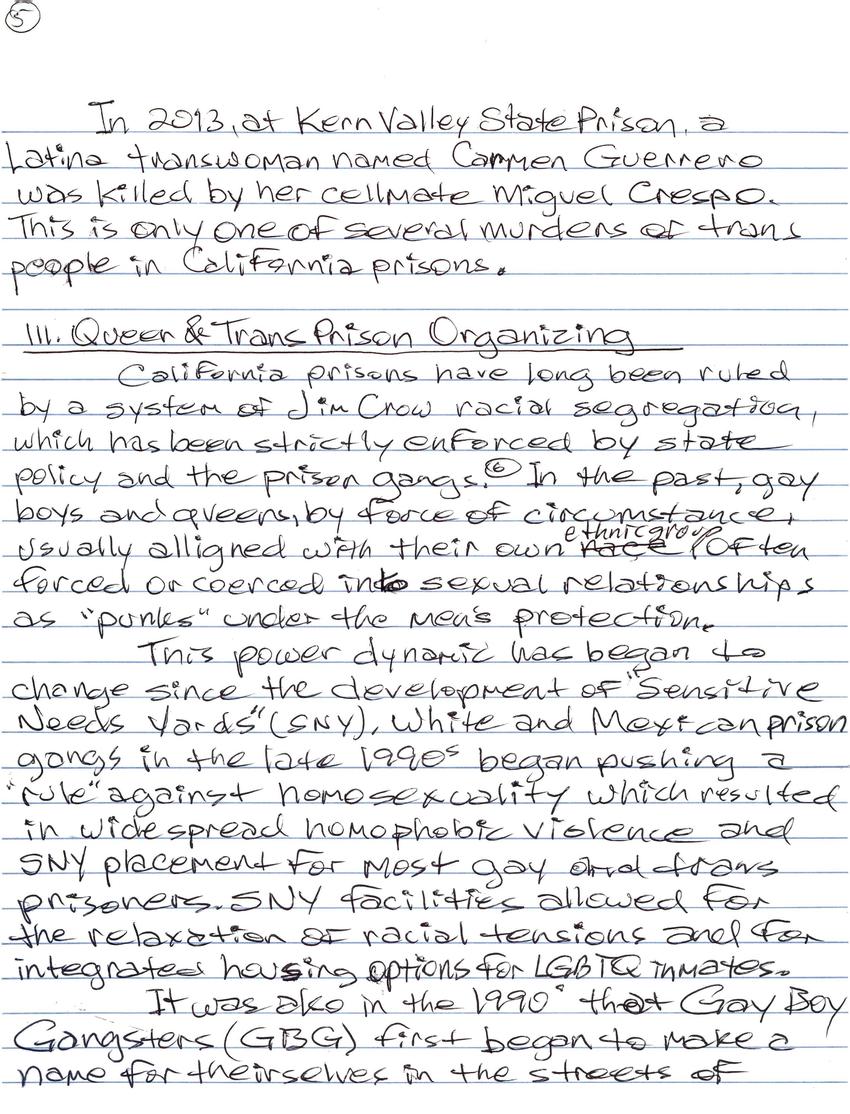 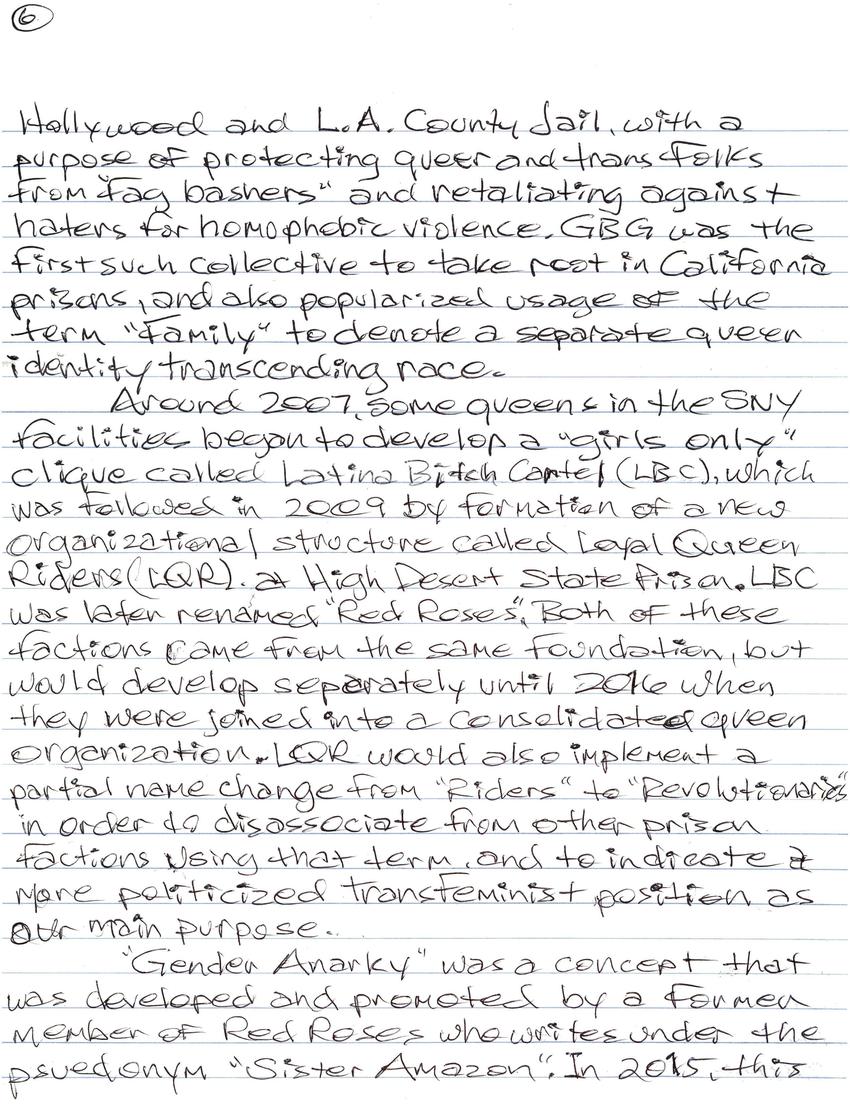 I. QUEER REVOLT IN AMERIKA

Queer and trans liberation struggles arose I the context of existing radical leftist movements of the 1960s, such as those of the Black Panthers and Women's Liberation, and are intersectional with issues of race, class, and gender. Two recently recognised historical sites of queer revolt, the Comptons in San Francisco and the Stonewall Inn in New York, mark the beginning of the LGBTQ rights movement.

In 1966, police raided the Compton's Cafeteria, a local hangout of the LGBTQ community in the Tenderloin District of San Francisco, where they proceeded to harass and arrest drag queens. One brave trans woman resisted this discriminatory action by police and a riot ensued.

In 1969, New York, police raided the Stonewall Inn, in a similar attack on LGBTQ people, where they met stiff resistance. This caused a larger street battle as the pigs barricaded themselves inside the building while people fed up with police abuse rioted in the streets, gay and trans rebels yelling insults and revolutionary slogans. A Boriqua drag queen, Sylvia Rivera was a central figure in this queer revolt and would later be called the "Mother of the Movement" by transgender activists.

These early days of struggle saw the formation of radical queer collectives like the Vanguard in San Francisco, and the Gay Liberation Front in New York, of which Sylvia Rivera was a member. However, she would often criticise gay activist for their exclusion of trans people people's issues, particularly with police harassment of drag queens and sex workers in the streets. Sylvia Rivera and Marsha P Jonson would take on a more radical political significance by starting their own group - street Transvestite Action Revolutionaries (STAR), which focused on providing housing and direct services to the trans community. STAR was endorsed by Black Panther Party leader Huey Newton and the Puerto Rican nationalist Young Lords Party.

California has a long history of radical political movements and social justice activism, particularly in the San Francisco Bay Area and the state prisons. From the founding of the Black Panther Party in Oakland to the assassination of George Jackson in San Quentin; from the 1992 LA Riots (a Black uprising against racist police brutality) to the 2011 state-wide prisoner hunger strikes against solitary confinement. Most recently, we witnessed anarchist and anti-fascist resistance successfully shut down white nationalist rallies in Berkley and Sacramento. Black Lives Matter also started with two queer women of colour from California!

The so-called "gay rights" movement started with radical QUEER INSURRECTION and TRANS RESISTANCE! The rise of American Fascism and the rigged election of an openly racist US President, Donald Trump, necessitates a return to our revolutionary roots!

A history of bias, abuse and profiling toward LGBTQ people by law enforcement has contributed to disproportionate criminalization and mass incarceration (1). According to the National Transgender Discrimination Survey, 16% of transgender adults have been in prison or jail for some reason. Those who are poor or people of colour especially face disrespect, harassment, discriminatory arrests, and physical or sexual assault by police at very high rates (2).

In prison settings, LGBTQ people are the most vulnerable to abuse and mistreatment by both staff and other prisoners. More than 200,000 youth and adults are sexually abused in prisons, jails and juvenile detention facilities each year according to federal estimates (3). A study of California prisons found that trans women in men's facilities were 13 times as likely to be sexually abused as other prisoners (4).

The Prison Rape Elimination Act (PREA) was passed by congress in 2003, which led to the 2012 implementation of the National Standards to Prevent, Detect and Respond to Prison Rape (known as the PREA Standards). These federal regulations include specific provisions for the protection of trans prisoners and state agencies face financial penalties for non-compliance (5). Thus far, PREA auditors have rubber-stamped compliance even in the worst facilities with high rates of sexual abuse.

When I first entered California state prison in 1989, trans healthcare was non-existent. Transexuals who had undergone hormone therapy prior to their incarceration were deemed "flamboyant homosexuals" and were segregated in the "Category B" unit at the California Medical Facility (CMF) in Vacaville.

In 2013, at Kern Valley State Prison, a Latina trans woman named Carmen Guerrero was killed by her cellmate Miguel Crespo. This is only one of several murders of trans people in California prisons.

California prisons have long been ruled by a system of Jim Crow racial segregation, which has been strictly enforced by state policy and the prison gangs (6). In the past, gay boys and queens, by force of circumstance, usually aligned with their own ethnic group, are often forced or coerced into sexual relationships as "ponies" under the men's protection.

This power dynamic has begun to change since the development of "Sensitive Needs Yards" (SNY). White and Mexican prison gangs in the late 1990s began pushing a "rule" against homosexuality which resulted in widespread homophobic violence and SNY placement for most gay and trans prisoners. SNY facilities allowed for the relaxation of racial tensions and for integrated housing options for LGBTQ inmates.

It was also in the 1990s that Gay Boy Gangsters (GBG) first began to make a name for themselves in the streets of Hollywood and LA County Jail, with a purpose of protecting queer and trans folks from "fag bashers" and retaliating against haters for homophobic violence. GBG was the first such collective to take root in California prisons, and also popularised usage of the term "family" to denote a separate queer identity transcending race.

Around 2007, some queens in the SNY facilities began to develop a "girls only" clique called Latina Bitch Cartel (LBC), which was followed in 2009 by formation of a new organisational structure called Loyal Queen Riders (LQR) at High Desert State Prison. LBC was later renamed "Red Roses". Both of these factions came from the same Foundation, but would develop separately until 2016 when they were joined into a consolidated queen organisation. LQR would also implement a partial name change form "Riders" to "Revolutionaries" in order to disassociate from other prison factions using that term, and to indicate a more politicised transfeminist position as our main purpose.

"Gender Anarky" was a concept that was developed and promoted by a former member of Red Roses, who writes under the pseudonym "Sister Amazon". In 2015, this OG homegirl was forcibly stripped of her rank and membership in Red Roses for repeated disloyalty and unacceptable violation of our rule against snitching. The Gender Anarky support site was also subsequently taken offline by the support team for similar reasons and for Zionist sympathies. The Gender Anarky "collective" is now defunct (7).

Red Roses/LQR has continued growing stronger in its purpose to build solidarity and support amongst transwomen, and to act as a resistance against hatred and violence when necessary. This modern-day Amazonian tribe has currently about 30 members state-wide, composed primarily of Black and Brown sisters (myself one of the exceptions) with solid street and prison backgrounds. These fierce femmes have adopted common usage of the last name "Rose" to signify a bond of tribal loyalty and sisterhood.

As a transfeminist prison collective, Red Roses/LQR also has an anti-racist, anti-fascist and prison abolitionist focus, while recognising intersectional issues of race, class, and gender in the wider struggle. We believe strongly in self-defence, but see violence as a last resort. We work with outside prisoner support groups and legal advocates to end the criminalisation and victimisation of trans folks by the police and prison officials.

As a result of a lawsuit brought by the Transgender Law Centre against CDCR, the court order has expanded access to clothing and canteen items for transgender people consistent with their gender identity (8). On April 28, 2017, CDCR issued Notice to Change to Regulations 17-03 (NCR 17-03), which created temporary regulation changes for authorised property for transgender prisoners. This new policy allows access to make-up, panties, and other items previously restricted to women's facilities only.

Additionally, on May 24, 2016, CDCR updated its Care Guide concerning Gender Dysphoria (GD) to allow inmate-patient evaluations for sex-reassignment surgery (SRS) (9). In spite of this policy change, CDCR is still as a rule predisposed against granting SRS, which is defined in still existing regulations as "not medically necessary" (D).

Thanks goes to Michelle Norsworthy and Shiloh Quine for these ground-breaking legal precedents. Their strength and resilience as trans women imprisoned under the post adverse circumstances imaginable led to these historic legal victories. The TGI Justice Project, Transgender Law Centre and Prison Law Office continue working to ensure compliance with these new policies by prison officials (11).

The mainstream LGBTQ rights movement and liberal elites have developed a political agenda centred around capitalist class interests and assimilationist goals with a focus on three issues: 1) marriage equality, 2) military service, and 3) hate crimes laws. The problem with this is that it perpetuates historically flawed institutions and systems of oppression such as patriarchy and white supremacy and does NOT resolve societal problems of racial oppression and gender violence. It would also NOT make our communities any safer from police brutality and prison slavery (12).

The corporate sponsored Pride (TM) events that take place every June - LGBTQ Pride Month - is a prime example of how the liberal Democrats and mainstream LGBTQ rights movement has co-opted Queer Liberation and Transfeminist struggle by controlling the narrative with a narrow focus on pro-capitalist, pro-military and pro-police objectives. Radical queer and trans folks have disrupted these Pride (TM) parades with chants of "No justice, no Pride!" in an effort to draw attention to the on-going criminalisation and violence many queer and trans people still experience in the streets and prisons, particularly those who are poor people or people of color in the new fascist USA of the pig Donald Trump!

While taking immediate actions to protect queer and trans people from some of the worst harms they face behind bars is critical, reforming jails and prisons can never be a complete solution (13). We must advocate an end to mass incarceration and police brutality now! Our ultimate goal is the abolition of prison slavery and the closure or repurposing of all penal detention facilities!

Jennifer Gann is an imprisoned anarchist and transfeminist prison rebel in California, who has continued to be involved in prison abolitionist work for three decades. She's an aspiring artist, blogger, poet, writer, student, worker and revolutionary activist. Her case is pending in the courts for a possible sentence reduction, and she has also in 2018 applied for a commutation of sentence from Govenor Jerry Brown. Check out her blog and support sites at:

Thanks so much for this fantastic article! I really enjoyed transcribing it and learned a lot about the history of queer rights and rebellion within the US prison system (I am based in the UK). Solidarity with you and your sisters and good wishes for your efforts in the future.
Hi Jennifer,

I just found your profile a few days ago, and I just wanted to reach out and thank you. You're putting in a lot of work every day to write these entries, tell your story and teach us. I organize volunteer programming at a women's correctional center and I talk to my volunteers about staying informed and active when it comes to the rights of incarcerated people. I'll make sure to tell them what you're teaching me. Queer and trans people everywhere are fighting for you. 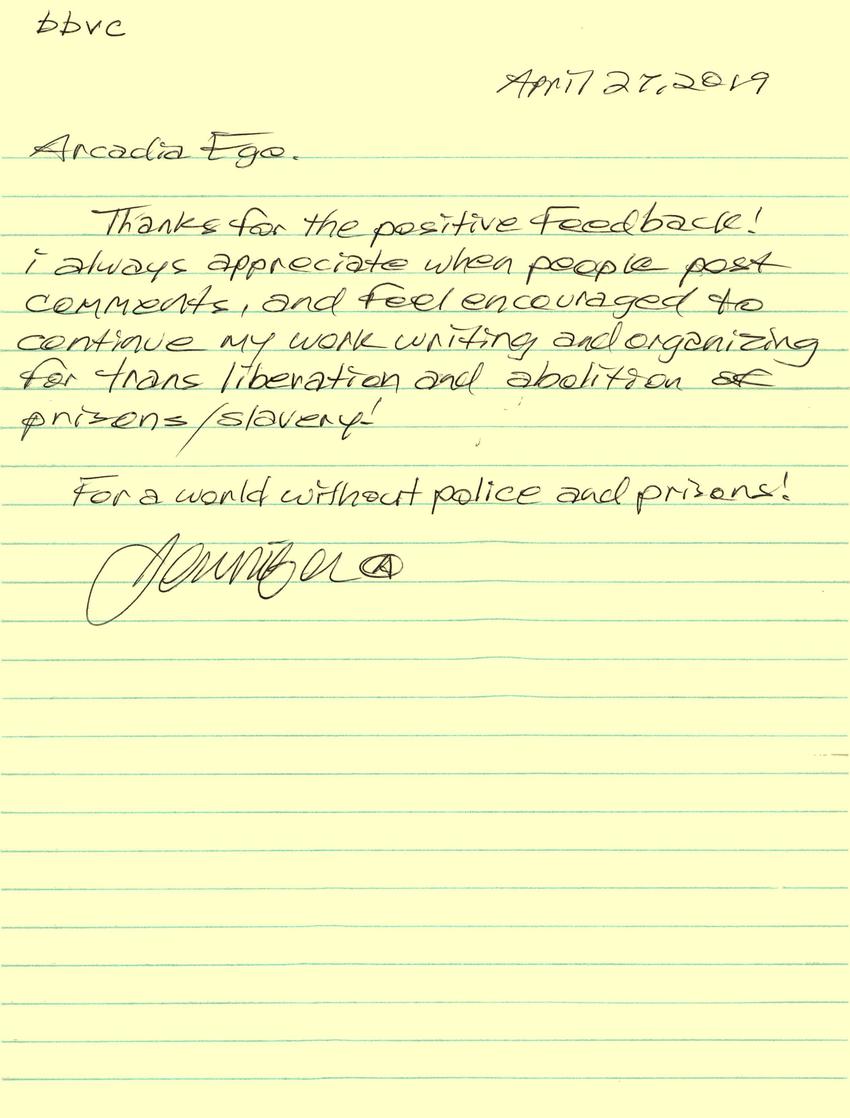 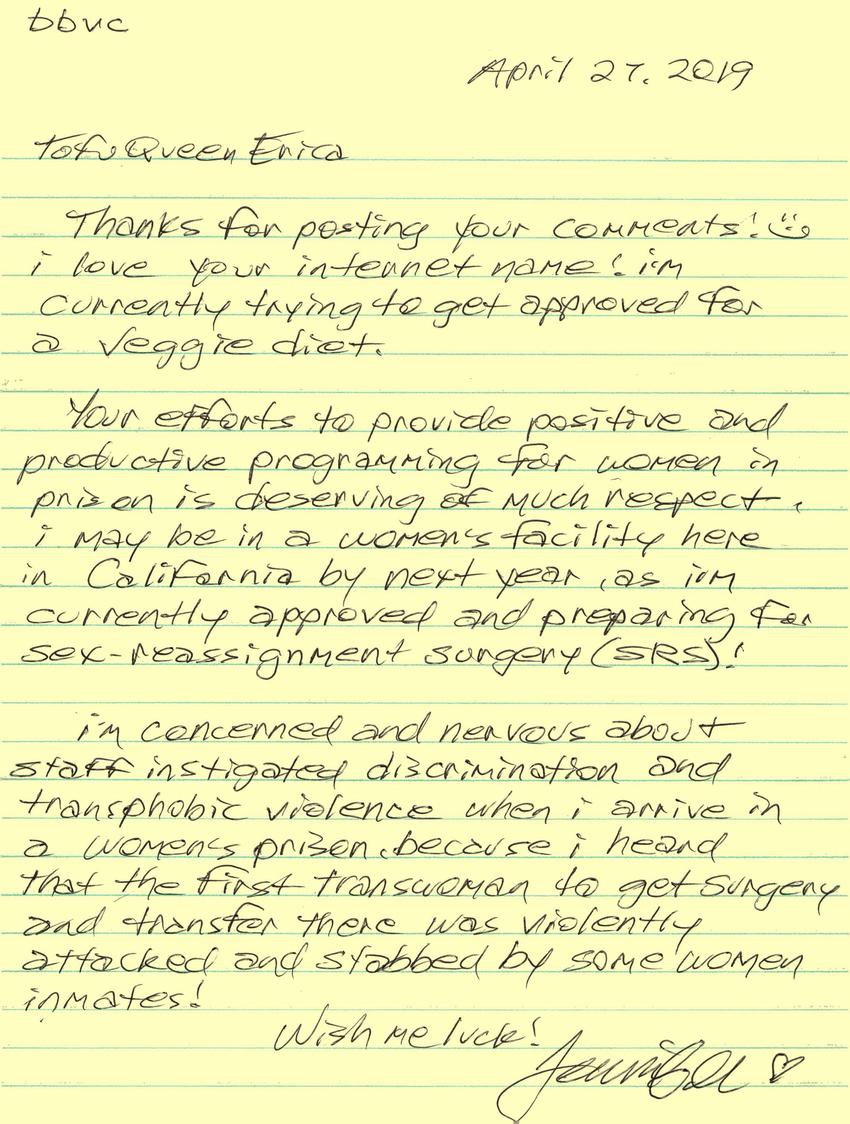