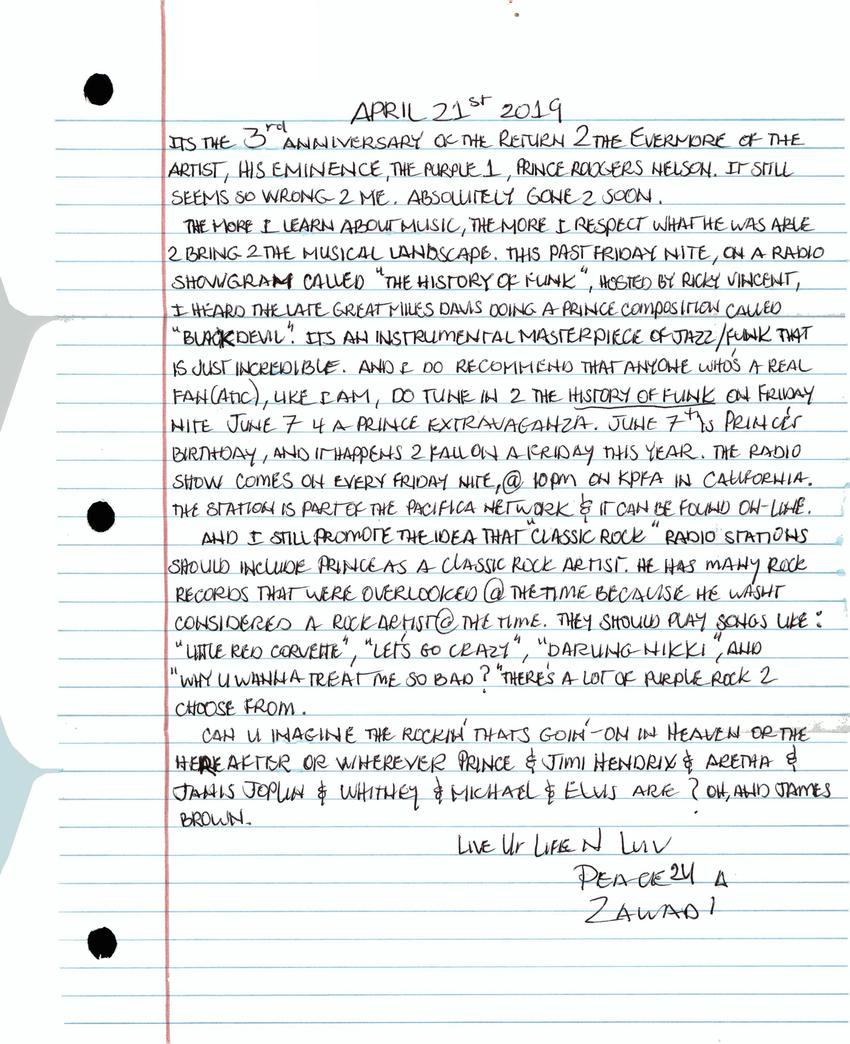 It's the 3rd anniversary of the return 2 the evermore of the artist, his eminence, the purple 1, Prince Rodgers Nelson. It still seems so wrong 2 me. Absolutely gone 2 soon.

The more I learn about music, the more I respect what he was able 2 bring 2 the musical landscape. This past Friday nite, on a radio showgram called "The History of Funk", hosted by Ricky Vincent, I heard the late great Miles Davis doing a Prince composition called "Black Devil". It's an instrumental masterpiece of jazz/funk that is just incredible. And I do recommend that anyone who's a real fan(atic), like I am, do tune in 2 The History of Funk on Friday nite June 7 4 a Prince extravaganza. June 7th is Prince's birthday, and it happens 2 fall on a Friday this year. The radio show comes on every Friday nite, @ 10pm on KPFA in California. The station is part of the Pacifica network & it can be found on-line.

And I still promote the idea that "classic rock" radio stations should include Prince as a classic rock artist. He has many rock records that were overlooked @ the time because he wasn't considered a rock artist @ the time. They should play songs like: "Little Red Corvette", "Let's Go Crazy", "Darling Nikki", and "Why U Wanna Treat Me So Bad?" There's a lot of purple rock 2 choose from.

Can u imagine the rockin' that's goin'-on in heaven or the hereafter or wherever Prince & Jimi Hendrix & Aretha & Janis Joplin & Whitney & Michael & Elvis are? Oh, and James Brown.

Michael, I finally found your blog again. Jon Saunders keep telling me that he wrote you, you wrote back but he could not get your reply. He is supposed to call me to find out how to get in touch with you. Just letting you know that he is still thinking about you and wants to keep in touch. Love you much