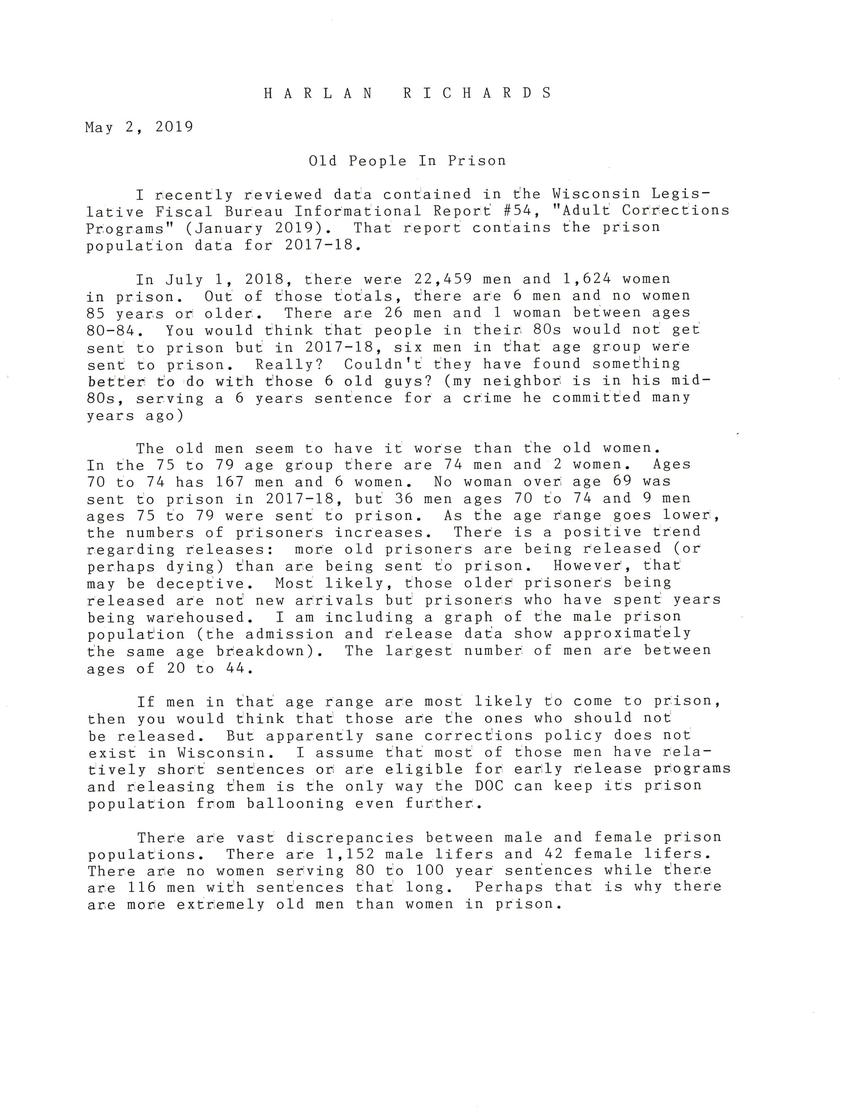 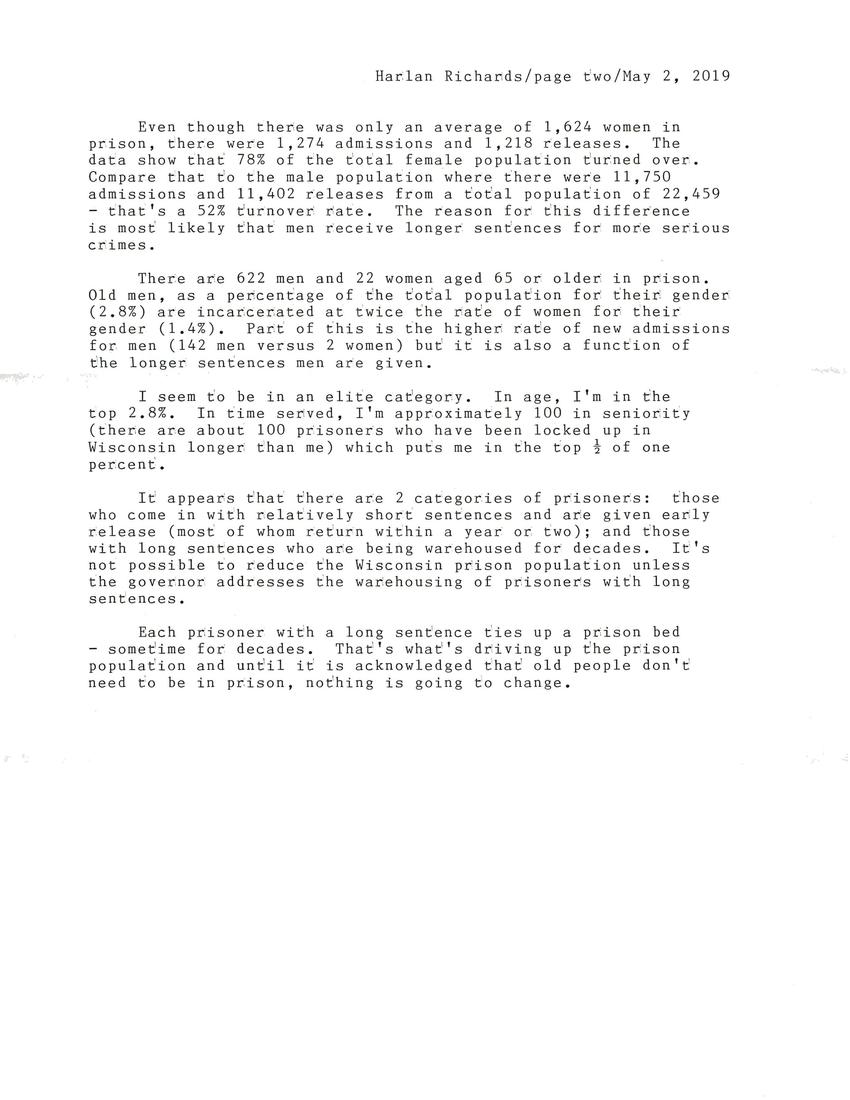 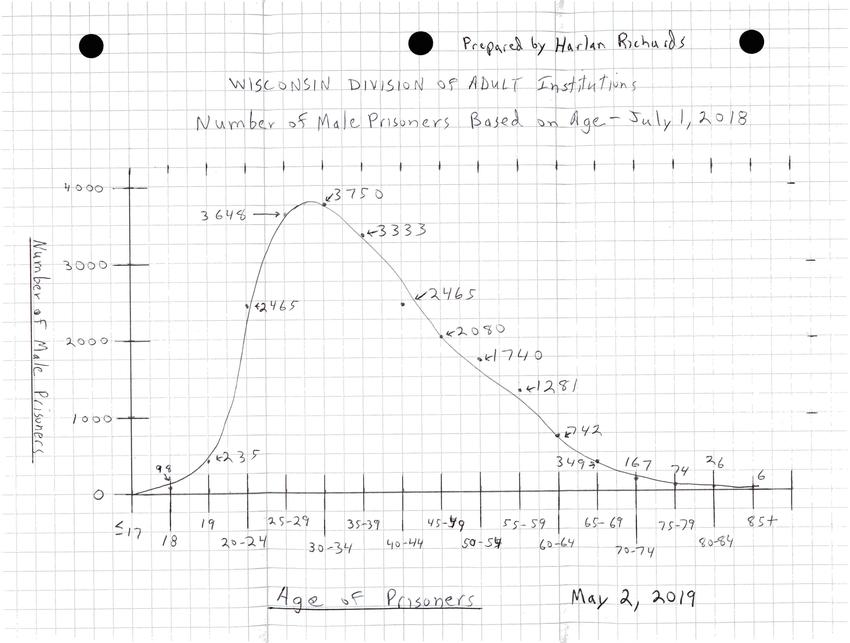 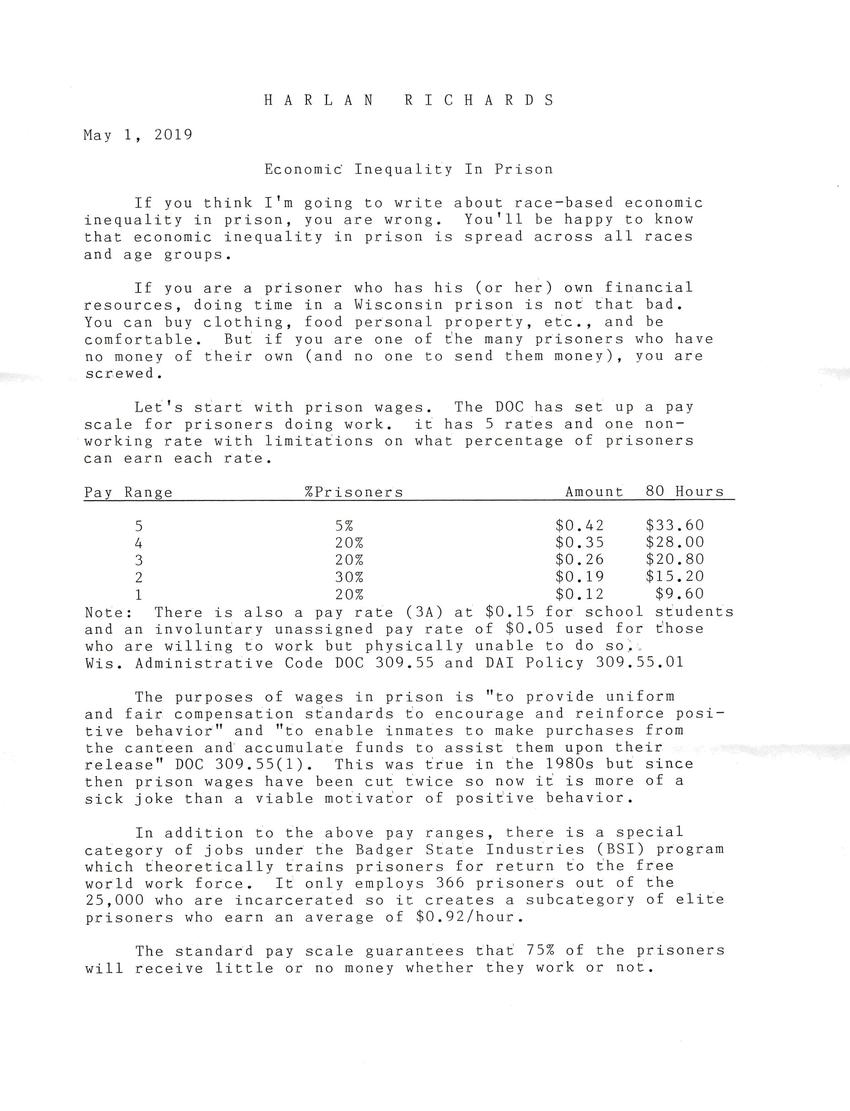 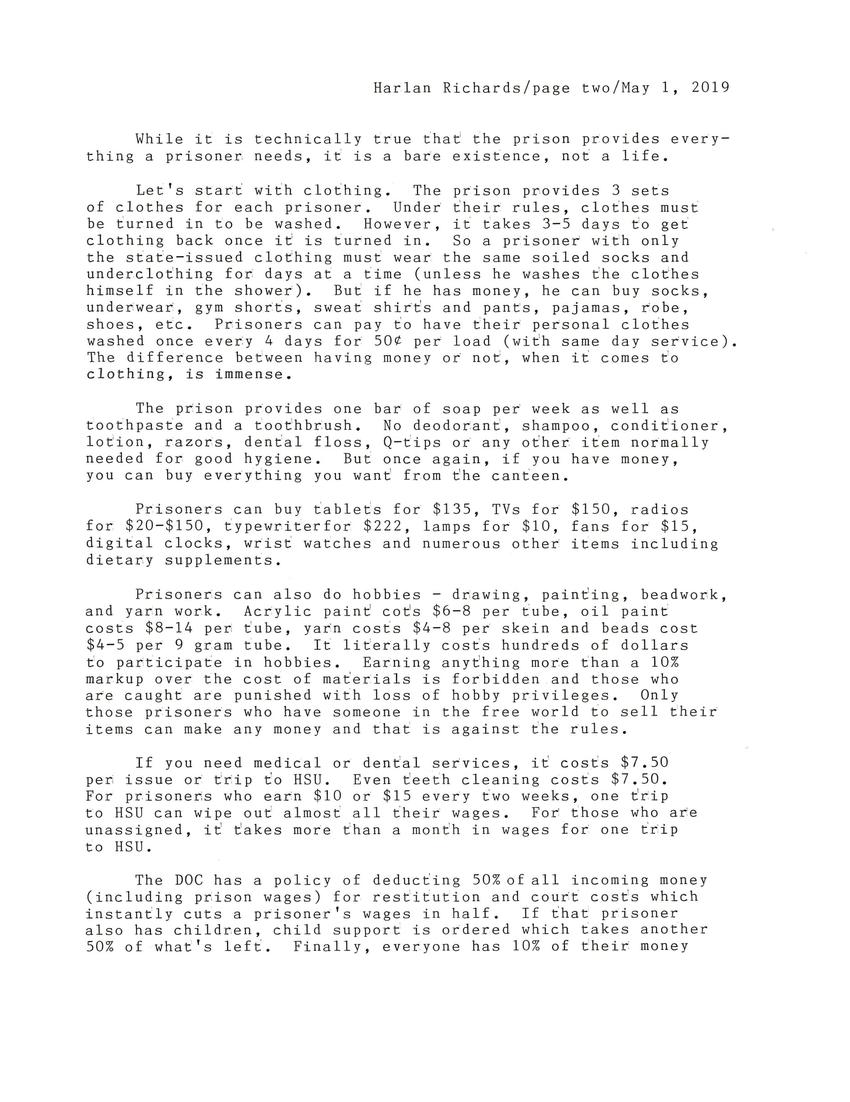 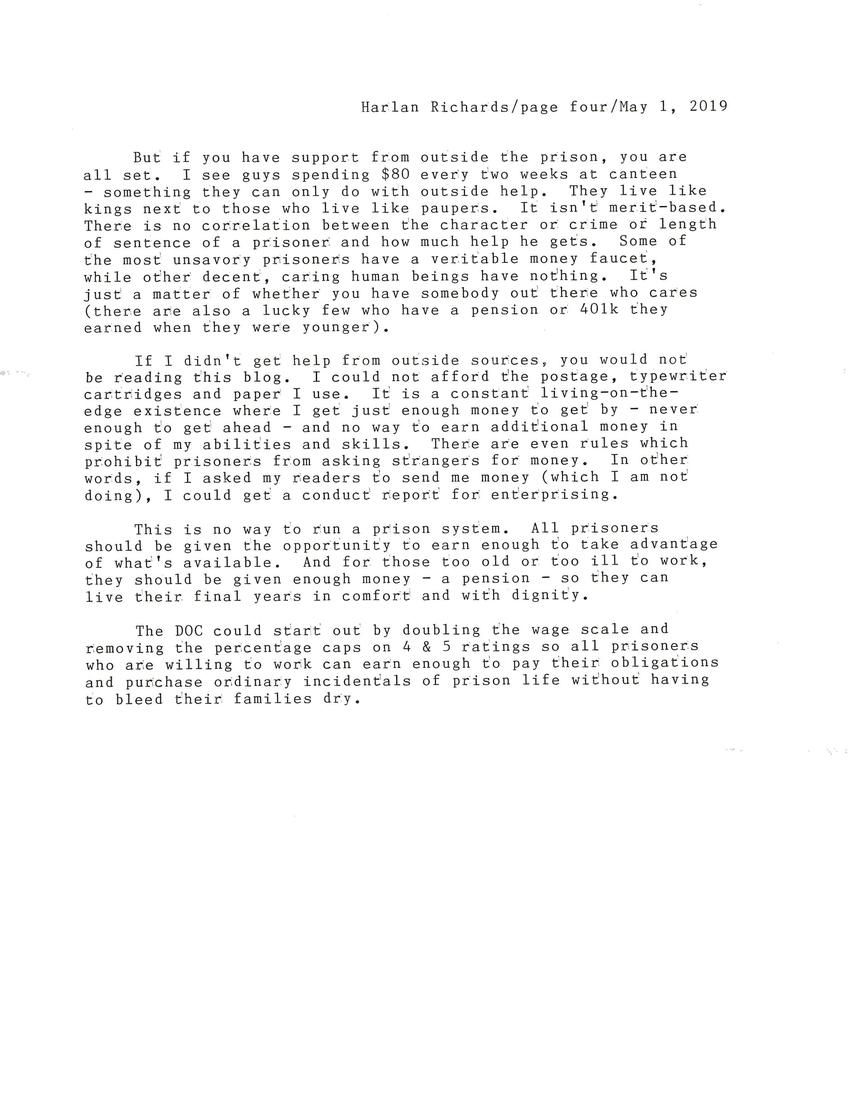 The old men seem to have it worse than the old women. In the 75 to 79 age group there are 74 men and 2 women. Ages 70 to 74 has 167 men and 6 women. No woman over age 69 was sent to prison in 2017-18, but 36 men ages 70 to 74 and 9 men ages 75 to 79 were sent to prison. As the age range goes lower, the numbers of prisoners increases. There is a positive trend regarding releases: more old prisoners are being released (or perhaps dying) than are being sent to prison. However, that may be deceptive. Most likely, those older prisoners being released are not new arrivals but prisoners who have spent years being warehoused. I am including a graph of the male prison population (the admission and release data show approximately the same age breakdown). The largest number of men are between ages of 20 to 44.

If men in that age range are most likely to come to prison, then you would think that those are the ones who should not be released. But apparently sane corrections policy does not exist in Wisconsin. I assume that most of those men have relatively short sentences or are eligible for early release programs and releasing them is the only way the DOC can keep its prison population from ballooning even further.

There are vast discrepancies between male and female prison populations. There are 1,152 male lifers and 42 female lifers. There are no women serving 80 to 100 year sentences while there are 116 men with sentences that long. Perhaps that is why there are more extremely old men than women in prison.

Even though there was only an average of 1,624 women in prison, there were 1,274 admissions and 1,218 releases. The data show that 78% of the total female population turned over. Compare that to the male population where there were 11,750 admissions and 11,402 releases from a total population of 22,459 - that's a 52% turnover rate. The reason for this difference is most likely that men receive longer sentences for more serious crimes.

There are 622 men and 22 women aged 65 or older in prison. Old men, as a percentage of the total population for their gender (2.8%) are incarcerated at twice the rate of women for their gender (1.4%). Part of this is the higher rate of new admissions for men (142 men versus 2 women) but it is also a function of the longer sentences men are given.

I seem to be in an elite category. In age, I'm in the top 2.8%. In time served, I'm approximately 100 in seniority (there are about 100 prisoners who have been locked up in Wisconsin longer than me) which puts me in the top 1/2 of one percent.

It appears that there are two categories of prisoners: those who come in with relatively short sentences and are given early release (most of whom return within a year or two); and those with long sentences who are being warehoused for decades. It's not possible to reduce the Wisconsin prison population unless the governor addresses the warehousing of prisoners with long sentences.

Each prisoner with a long sentence ties up a prison bed - sometimes for decades. That's what's driving up the prison population and until it is acknowledged that old people don't need to be in prison, nothing is going to change.

Wisconsin Division of Adult Institutions
Number of Male Prisoners Based on Age - July 1, 2018

If you are a prisoner who has his (or her) own financial resources, doing time in a Wisconsin prison is not that bad. You can buy clothing, food, personal property, etc., and be comfortable. But if you are one of the many prisoners who have no money of their own (and no one to send them money), you are screwed.

Let's start with prison wages. The DOC has set up a pay scale for prisoners doing work. It has 5 rates and one non-working rate with limitations on what percentage of prisoners can earn each rate.

The purposes of wages in prison is "to provide uniform and fair compensation standards to encourage and reinforce positive behavior" and "to enable inmates to make purchases from the canteen and accumulate funds to assist them upon their release" DOC 309.55(1). This was true in the 1980s but since then prison wages have been cut twice so now it is more of a sick joke than a viable motivator of positive behavior.

In addition to the above pay ranges, there is a special category of jobs under the Badger State Industries (BSI) program which theoretically trains prisoners for return to the free world work force. It only employs 366 prisoners out of the 25,000 who are incarcerated so it creates a subcategory of elite prisoners who earn an average of $0.92/hour.

The standard pay scale guarantees that 75% of the prisoners will receive little or no money whether they work or not.

While it is technically true that the prison provides everything a prisoner needs, it is a bare existence, not a life.

Let's start with clothing. The prison provides 3 sets of clothes for each prisoner. Under their rules, clothes must be turned in to be washed. However, it takes 3-5 days to get clothing back once it is turned in. So a prisoner with only the state-issued clothing must wear the same soiled socks and underclothing for days at a time (unless he washes the clothes himself in the shower). But if he has money, he can buy socks, underwear, gym shorts, sweat shirts and pants, pajamas, robe, shoes, etc. Prisoners can pay to have their personal clothes washed once every four days for 50c per load (with same day service). The difference between having money or not, when it comes to clothing, is immense.

The prison provides one bar of soap per week as well as toothpaste and a toothbrush. No deodorant, shampoo, conditioner, lotion, razors, dental floss, Q-tips or any other item normally needed for good hygiene. But once again, if you have money, you can buy everything you want from the canteen.

Prisoners can also do hobbies - drawing, painting, beadwork, and yarn work. Acrylic paint costs $6-8 per tube, oil paint costs $8-14 per tube, yarn costs $4-8 per skein and beads cost $4-5 per 9 gram tube. It literally costs hundreds of dollars to participate in hobbies. Earning anything more than a 10% markup over the cost of materials is forbidden and those who are caught are punished with loss of hobby privileges. Only those prisoners who have someone in the free world to sell their items can make any money and that is against the rules.

If you need medical or dental services, it costs $7.50 per issue or trip to HSU. Even teeth cleaning costs $7.50. For prisoners who earn $10 or $15 every two weeks, one trip to HSU can wipe out almost all their wages. For those who are unassigned, it takes more than a month in wages for one trip to HSU.

The DOC has a policy of deducting 50% of all incoming money (including prison wages) for restitution and court costs which instantly cuts a prisoner's wages in half. If that prisoner also has children, child support is ordered which takes away another 50% of what's left. Finally, everyone has 10% of their money taken and placed in a release account to be used upon their release (even if they are never getting out of prison - the money will be used to dispose of the body). Some guys lose 90% of their money to these deductions. Often, it costs more in staff time and resources to collect the money than the amount of money that's collected.

It's obvious that prisoners cannot thrive under the current wage rates and confiscatory practices. How a prisoner lives is determined by how many resources he can get from outside the prison. For those guys facing large deductions, one strategy is to have money sent to another prisoner who has his court obligations paid off. That prisoner then buys canteen items and usually gets a 20% payment for his services. It's better to give another prisoner 20% than to pay out 50 to 90% to the state. Personal property can be purchased by friends and family for the prisoner which is another way to get around the onerous deductions.

If you have someone who is willing to support you in prison, you can get all of the items available to prisoners. But what if you're 70 years old and have been in prison for 30 years? You're too old to work, perhaps have cancer or diabetes, and are paid $4 every two weeks. What kind of life will you have? Stamped envelopes are 72c, coffee is $2-3/bag, deodorant is $1-3, shampoo is $2, lotion is $2. What will you spend your money on? How will you live in prison? If you have personal clothing, how will you wash it? Is this what our citizen's golden years should look like? What kind of country are we? Harsh, oppressive prison conditions for doddering, old men?

The problem isn't with prisoners unwilling to work, it is with a system that prevents prisoners from earning enough money to live on. Prisoners aren't asking for a handout, but for a chance to earn enough to make ends meet - something the DOC won't allow. Prisoners serving sentences into their old age should be given a pension after a certain age just like they would get if they spent their lives working in the free world. The current wage scale does the opposite of what their stated purposes are. It is slave labor which should not be allowed in a civilized society.

But if you have support from outside the prison, you are all set. I see guys spending $80 every two weeks at canteen - something they can only do with outside help. They live like kings next to those who live like paupers. It isn't merit-based. There is no correlation between the character or crime or length of sentence of a prisoner and how much help he gets. Some of the most unsavory prisoners have a veritable money faucet, while other decent, caring human beings have nothing. It's just a matter of whether you have somebody out there who cares (there are also a lucky few who have a pension or 401k they earned when they were younger).

If I didn't get help from outside sources, you would not be reading this blog. I could not afford the postage, typewriter cartridges and paper I use. It is a constant living-on-the-edge existence where I get just enough money to get by - never enough to get ahead - and no way to earn additional money in spite of my abilities and skills. There are even rules which prohibit prisoners from asking strangers for money. In other words, if I asked my readers to send me money (which I am not doing), I could get a conduct report for enterprising.

This is no way to run a prison service. All prisoners should be given the opportunity to earn enough to take advantage of what's available. And for those too old or too ill to work, they should be given enough money - a pension - so they can live their final years in comfort and with dignity.

The DOC could start out by doubling the wage scale and removing the percentage caps on 4 & 5 ratings so all prisoners who are willing to work can earn enough to pay their obligations and purchase ordinary incidentals of prison life without having to bleed their families dry.

Thank you for writing about current happenings at Stanley and sharing your insight on topics like the economic inequality in prison. I'm printing out some of your blogs to give to my Assemblyman when I meet with him on Monday to share my observations and John's recommendations about potential prison reform. He's talking the talk--we'll see if he walks the walk on making a difference.

John said he met you at the recent mindfulness class that he attended. Because there are no programs for him, he's choosing to attend classes and groups that might keep him positive and offer personal growth. 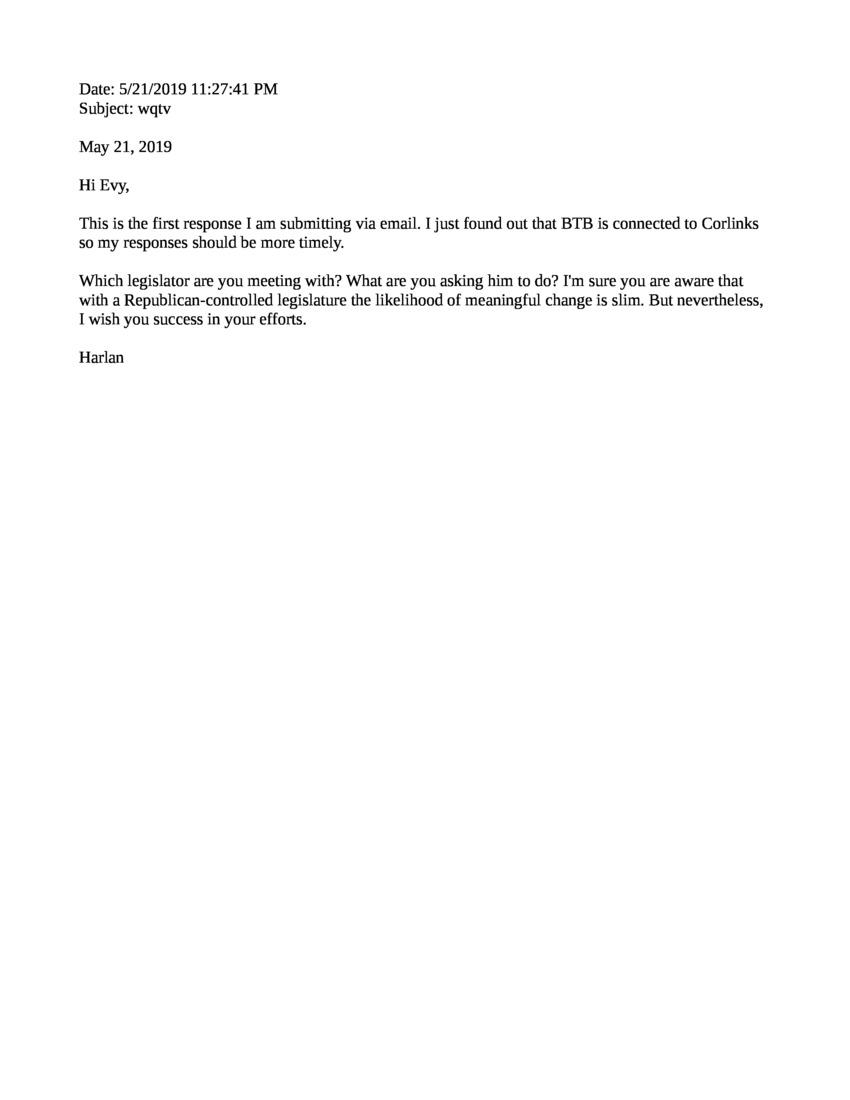