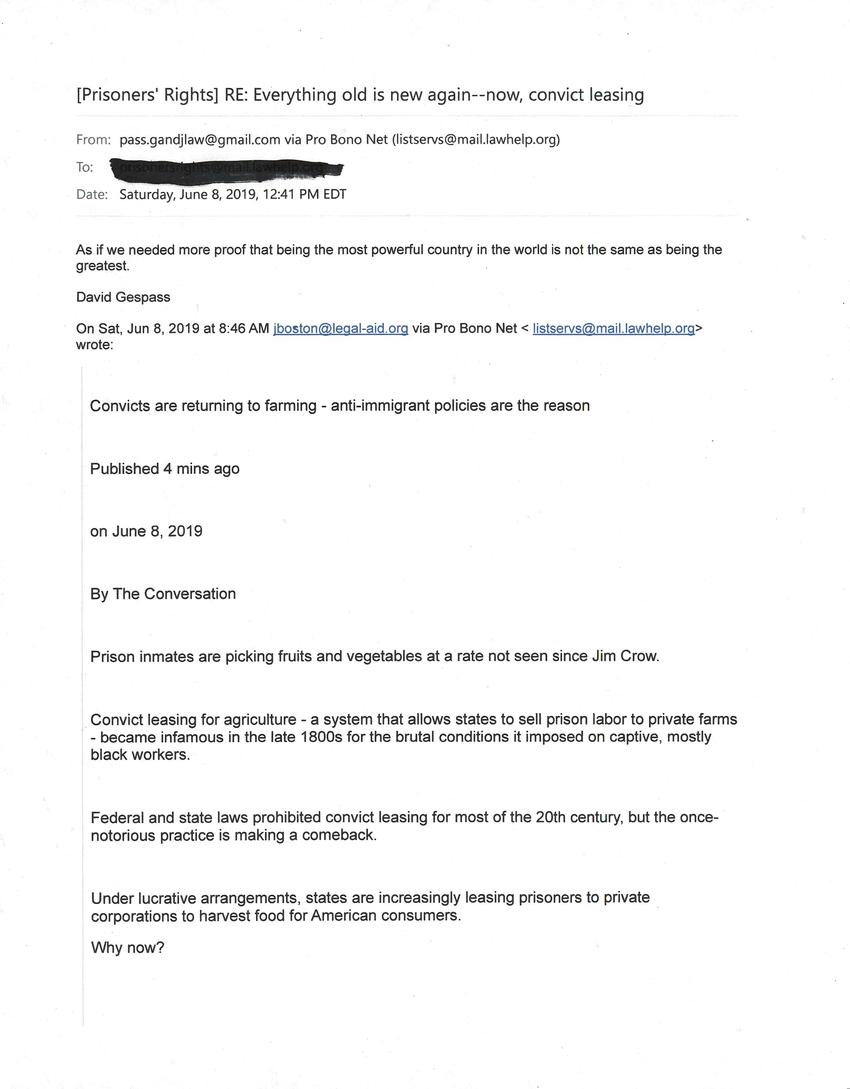 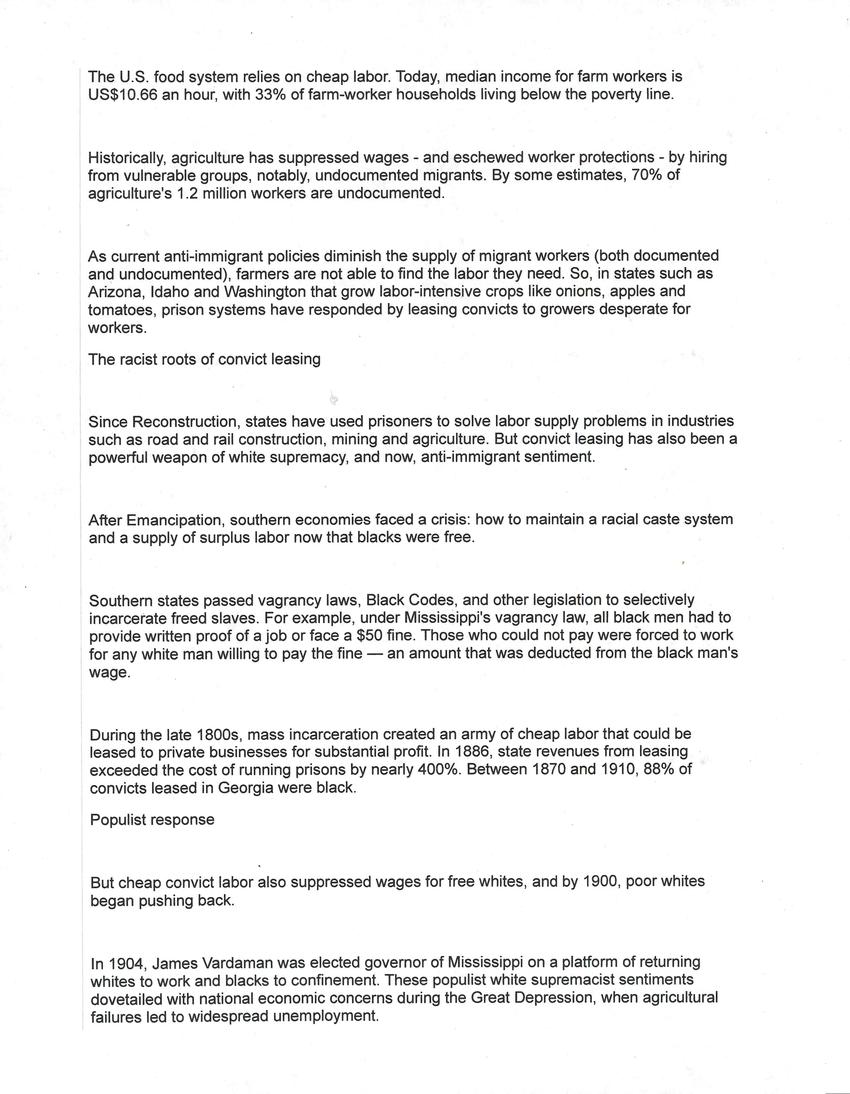 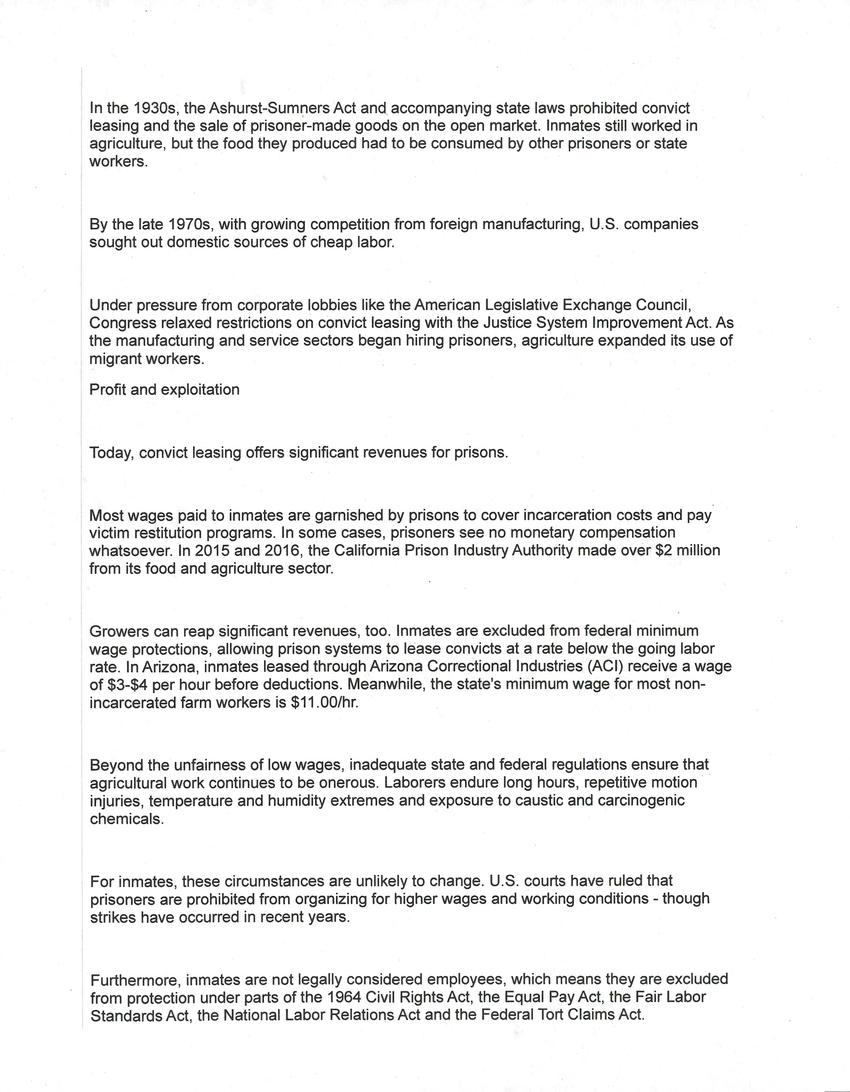 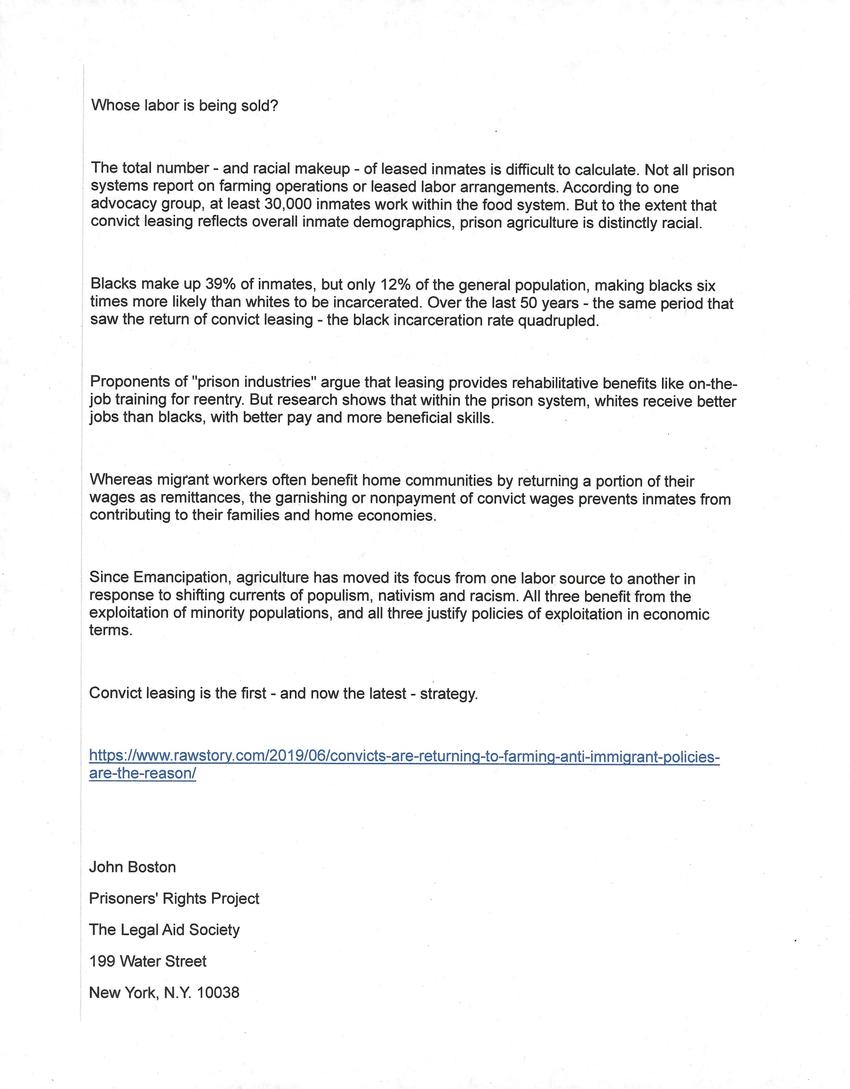 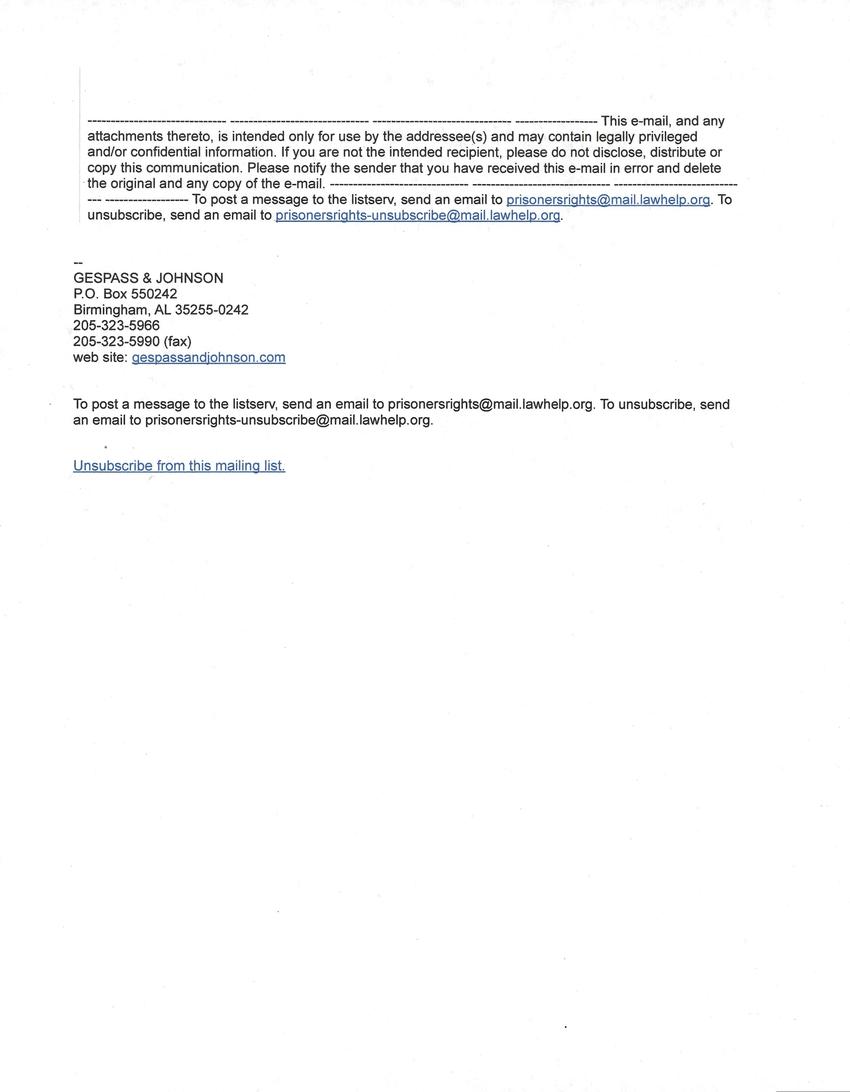 As if we needed more proof that being the most powerful country in the world is not the same as being the greatest.

Convicts are returning to farming – anti-immigrant policies are the reason
on June 8, 2019
By The Conversation

Prison inmates are picking fruits and vegetables at a rate not seen since Jim Crow.

Convict leasing for agriculture – a system that allows states to sell prison labor to private farms – became infamous in the late 1800s for the brutal conditions it imposed on captive, mostly black workers.

Federal and state laws prohibited convict leasing for most of the 20th century, but the once-notorious practice is making a comeback.

Why now?
The U.S. food system relies on cheap labor. Today, median income for farm workers is US$10.66 an hour, with 33% of farm-worker households living below the poverty line.

Historically, agriculture has suppressed wages – and eschewed worker protections – by hiring from vulnerable groups, notably, undocumented migrants. By some estimates, 70% of agriculture’s 1.2 million workers are undocumented.

As current anti-immigrant policies diminish the supply of migrant workers (both documented and undocumented), farmers are not able to find the labor they need. So, in states such as Arizona, Idaho and Washington that grow labor-intensive crops like onions, apples and tomatoes, prison systems have responded by leasing convicts to growers desperate for workers.

The racist roots of convict leasing
Since Reconstruction, states have used prisoners to solve labor supply problems in industries such as road and rail construction, mining and agriculture. But convict leasing has also been a powerful weapon of white supremacy, and now, anti-immigrant sentiment.

After Emancipation, southern economies faced a crisis: how to maintain a racial caste system and a supply of surplus labor now that blacks were free.

Southern states passed vagrancy laws, Black Codes, and other legislation to selectively incarcerate freed slaves. For example, under Mississippi’s vagrancy law, all black men had to provide written proof of a job or face a $50 fine. Those who could not pay were forced to work for any white man willing to pay the fine — an amount that was deducted from the black man’s wage.

During the late 1800s, mass incarceration created an army of cheap labor that could be leased to private businesses for substantial profit. In 1886, state revenues from leasing exceeded the cost of running prisons by nearly 400%. Between 1870 and 1910, 88% of convicts leased in Georgia were black.

In this Library of Congress photo from 1903, juvenile convicts are shown at work in the fields, location unknown. Library of Congress/Detroit Publishing Co.
Populist response
But cheap convict labor also suppressed wages for free whites, and by 1900, poor whites began pushing back.

In 1904, James Vardaman was elected governor of Mississippi on a platform of returning whites to work and blacks to confinement. These populist white supremacist sentiments dovetailed with national economic concerns during the Great Depression, when agricultural failures led to widespread unemployment.

In the 1930s, the Ashurst-Sumners Act and accompanying state laws prohibited convict leasing and the sale of prisoner-made goods on the open market. Inmates still worked in agriculture, but the food they produced had to be consumed by other prisoners or state workers.

By the late 1970s, with growing competition from foreign manufacturing, U.S. companies sought out domestic sources of cheap labor.

Under pressure from corporate lobbies like the American Legislative Exchange Council, Congress relaxed restrictions on convict leasing with the Justice System Improvement Act. As the manufacturing and service sectors began hiring prisoners, agriculture expanded its use of migrant workers.

Most wages paid to inmates are garnished by prisons to cover incarceration costs and pay victim restitution programs. In some cases, prisoners see no monetary compensation whatsoever. In 2015 and 2016, the California Prison Industry Authority made over $2 million from its food and agriculture sector.

Growers can reap significant revenues, too. Inmates are excluded from federal minimum wage protections, allowing prison systems to lease convicts at a rate below the going labor rate. In Arizona, inmates leased through Arizona Correctional Industries (ACI) receive a wage of $3-$4 per hour before deductions. Meanwhile, the state’s minimum wage for most non-incarcerated farm workers is $11.00/hr.

For inmates, these circumstances are unlikely to change. U.S. courts have ruled that prisoners are prohibited from organizing for higher wages and working conditions – though strikes have occurred in recent years.

Furthermore, inmates are not legally considered employees, which means they are excluded from protection under parts of the 1964 Civil Rights Act, the Equal Pay Act, the Fair Labor Standards Act, the National Labor Relations Act and the Federal Tort Claims Act.

Excerpt from minutes of the regular meeting of the Texas Penitentiary Board, Nov. 12, 1903. Board of Criminal Justice minutes and meeting files, Texas Department of Criminal Justice, Archives and Information Services Division, Texas State Library and Archives Commission.
Whose labor is being sold?
The total number – and racial makeup – of leased inmates is difficult to calculate. Not all prison systems report on farming operations or leased labor arrangements. According to one advocacy group, at least 30,000 inmates work within the food system. But to the extent that convict leasing reflects overall inmate demographics, prison agriculture is distinctly racial.

Blacks make up 39% of inmates, but only 12% of the general population, making blacks six times more likely than whites to be incarcerated. Over the last 50 years – the same period that saw the return of convict leasing – the black incarceration rate quadrupled.

Proponents of “prison industries” argue that leasing provides rehabilitative benefits like on-the-job training for reentry. But research shows that within the prison system, whites receive better jobs than blacks, with better pay and more beneficial skills.

Whereas migrant workers often benefit home communities by returning a portion of their wages as remittances, the garnishing or nonpayment of convict wages prevents inmates from contributing to their families and home economies.

Since Emancipation, agriculture has moved its focus from one labor source to another in response to shifting currents of populism, nativism and racism. All three benefit from the exploitation of minority populations, and all three justify policies of exploitation in economic terms.

Convict leasing is the first – and now the latest – strategy.

Stian Rice is a member of the American Association of Geographers

The association is a funding partner of The Conversation US.

Convict leasing is the first - and now the latest - strategy
https://www.rawstory.com/2019/06/convicts-are-returning-to-farming-anti-immigrant-policies-are-the-reason/