So Many Intrusive Questions! (Part 2) 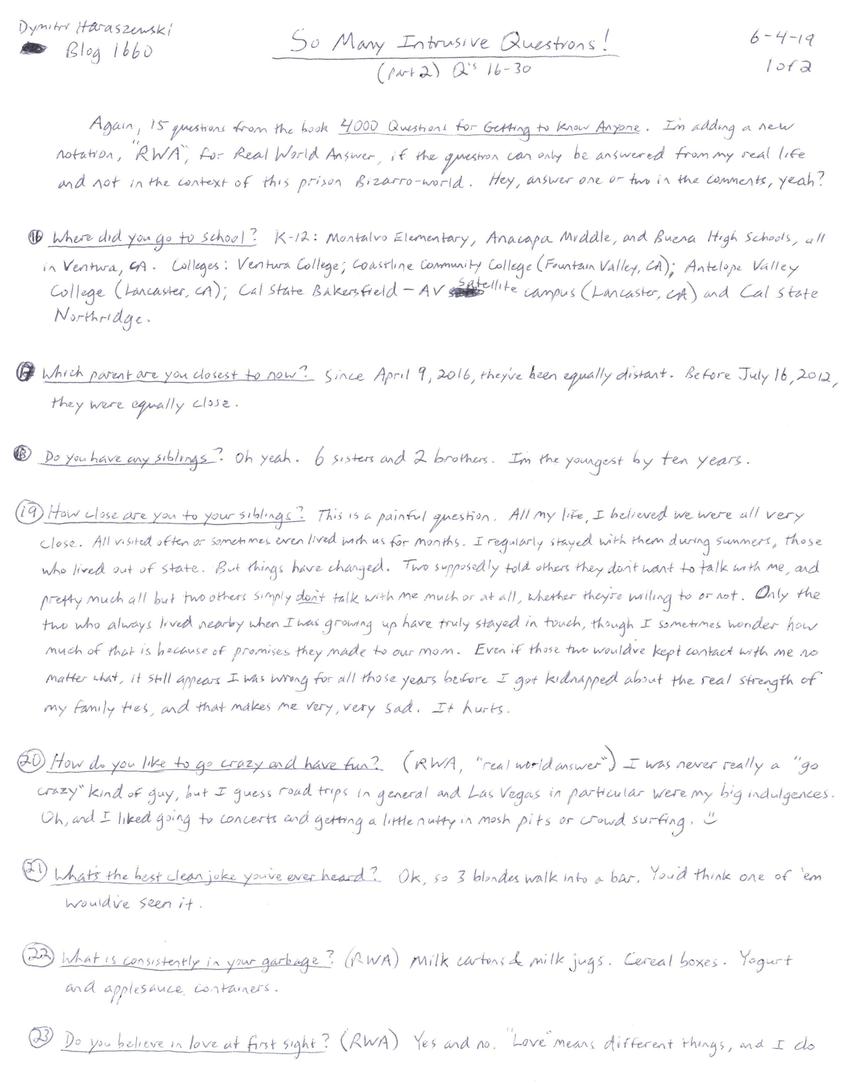 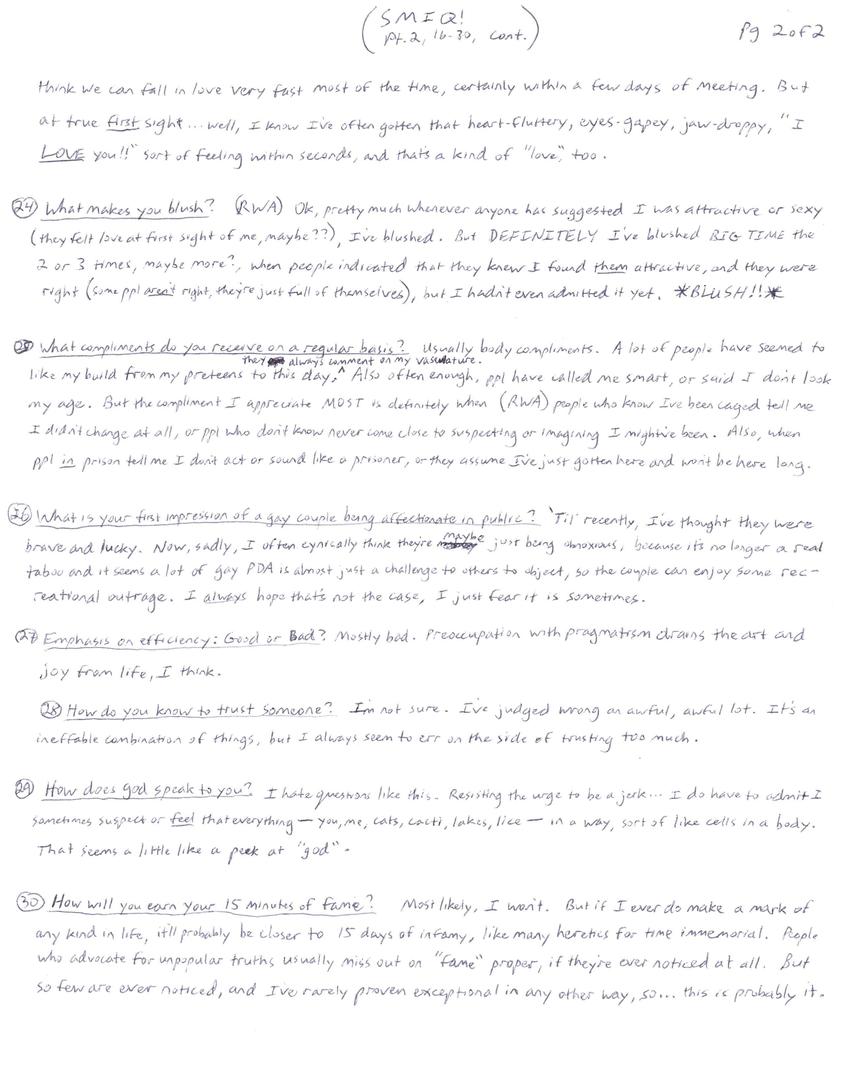 So Many Intrusive Questions!
Part 2
Questions 16-30

Again, 15 questions from 4,000 Questions For Getting To Know Anyone and Everyone. I'm adding a new notation: RWA for "real weird answer", if the questions can only be answered from my real life and not in the context of prison bizarro-world.

Hey, answer one or two in the comments, yeah?

18. Do you have any siblings?
Oh yeah. Six sisters and two brothers. I'm the youngest by ten years.

19. How close are you to your siblings?
This is a painful question. All my life, I believed we were all very close. All visited often or sometimes even lived with us for months. I regularly stayed with them during summers, those who lived out of state. But things have changed. Two supposedly told others they don't want to talk with me, and pretty much all but two others simply don't talk with me much or at all, whether they're willing to or not. Only the two who always lived nearby when I was growing up have truly stayed in touch, though I sometimes wonder how much of that is because of promises they made to our mom. Even if these two would've kept contact with me no matter what, it still appears I was wrong all those years before I got kidnapped about the real strength of family ties. That makes me very, very sad. It hurts.

20. How do you like to go crazy and have fun?
RWA = I was never really a "go crazy" kind of guy, but I guess road trips in general. Las Vegas in particular were my big indulgences. Oh, and I liked going to concerts and getting a little nutty in mosh pits or crowd surfing. :)

21. What's the best clean joke you've ever heard?
Okay, so three blondes walk into a bar. You'd think one of 'em would've seen it.

22. What is consistently in your garbage?
RWA = Milk cartons and milk jugs. Cereal boxes. Yogurt and applesauce containers.

23. Do you believe in love in first sight?
RWA = Yes and no. Love means different things, and I do think we can fall in love at very fast most of the time. Certainly within a few days of meeting. But at true first sight... Well, I know I've often gotten that heart-fluttery, eye-gapey, jaw-droppy "I love you!" sort of feeling within seconds, and that's kind of love too.

24. What makes you blush?
RWA = Okay, pretty much whenever anyone has suggested I was attractive or sexy. They felt love at first sight for me, maybe? I've blushed. But DEFINITELY I've blushed BIG TIME the two or three times—maybe more?—when people indicated that they know I found them attractive and they were right. Some people aren't right, they're just full of themselves. But I hadn't even admitted it yet. Blush!

25. What compliments do you receive on a regular basis?
Usually body compliments. A lot of people seemed to like my build from my parents to this day. They always compliment on my musculature. Also, often enough, people have called me smart or said I don't look my age. But the compliment I appreciate MOST is definitely when (RWA) people who know I've been caged tell me I didn't change at all. Or when people who didn't know never come close to suspecting or imagining I might've been. Also, when not in prison, I've been told I don't act or sound like a prisoner. Or they assume that I've just gotten here and won't be here long.

26. What is your first impression of a gay couple being affectionate in public?
Till recently, I've thought they were brave and lucky. Now, sadly, I often cynically think they're maybe just being obnoxious because it's no longer a real taboo. It seems a lot of gay PDA is almost just a challenge to others to object, so the couple can enjoy some recreational outrage. I always hope that's not the case. I just fear that it is sometimes.

27. Emphasis on efficiency: good or bad?
Mostly bad. Preoccupation with pragmatism drains the art and joy from life, I think.

28. How do you know to trust someone?
I'm not sure. I've judged wrong an awful, awful lot. It's an ineffable combination of things. But I always seem to err on the side of trusting too much.

29. How does God speak to you?
I hate questions like these. Resisting the urge to be jerk, I do have to admit I sometimes suspect or feel that everything—you, me, cats, cacti, lakes, lice—in a way, sort of like cells in a body. That seems a little like a peek at "God".

30. How will you earn your 15 minutes of fame?
Most likely, I won't. But if I ever do make a mark of any kind in my life, it'll probably be closer to 15 days of infamy. Like many heretics for time immemorial. People who advocate for unpopular truths usually miss out on fame proper—if they're even noticed at all. But so few are ever noticed, and I've rarely proven exceptional in any other ways. So... this is probably it. 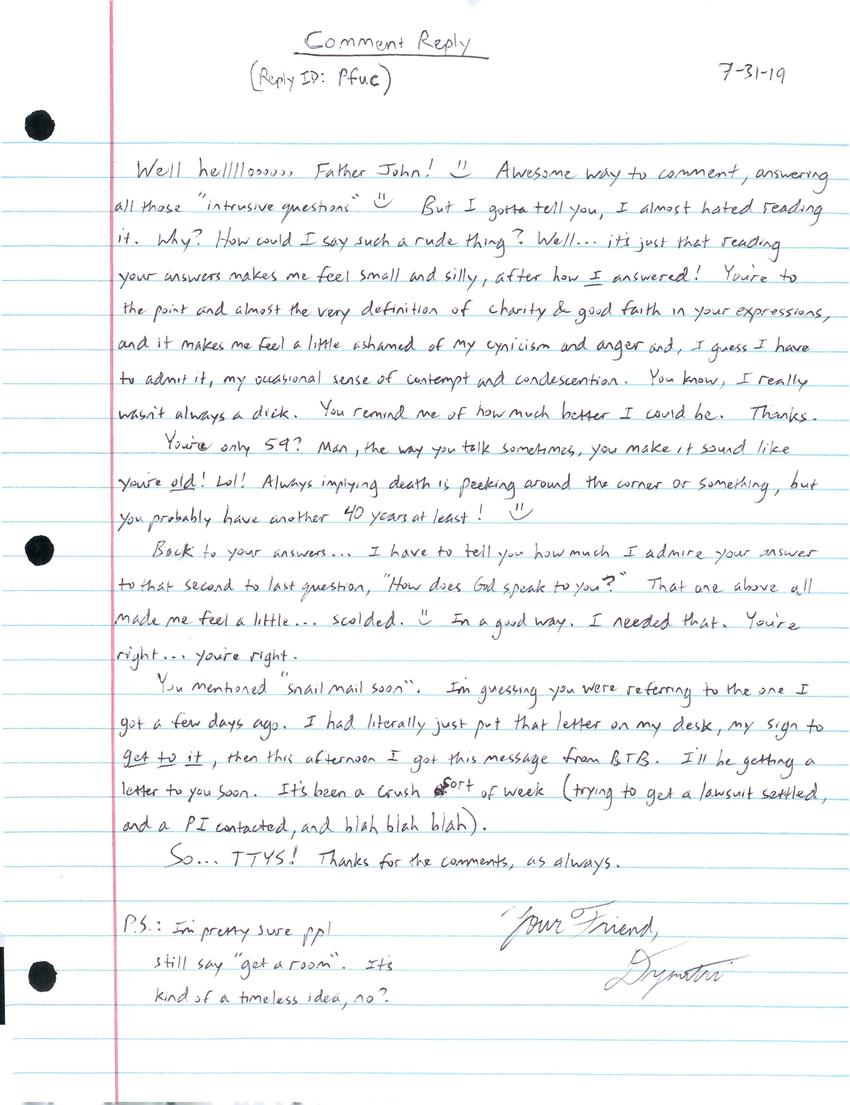