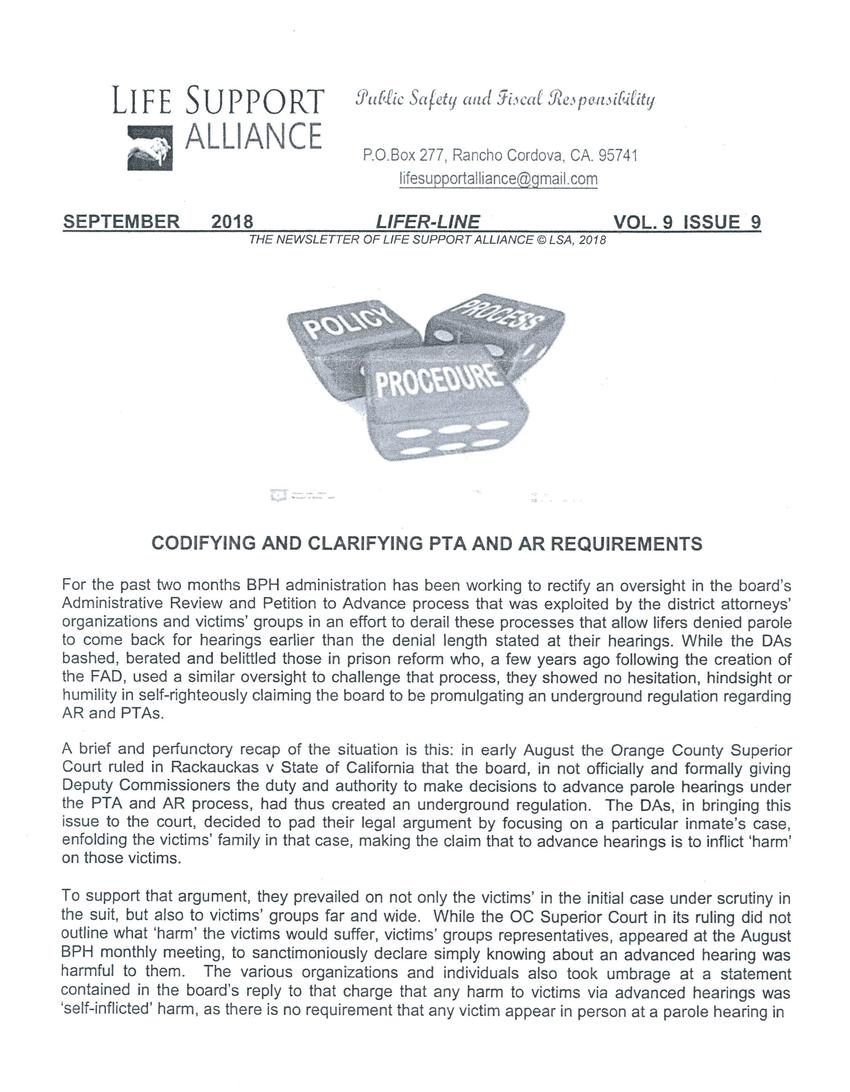 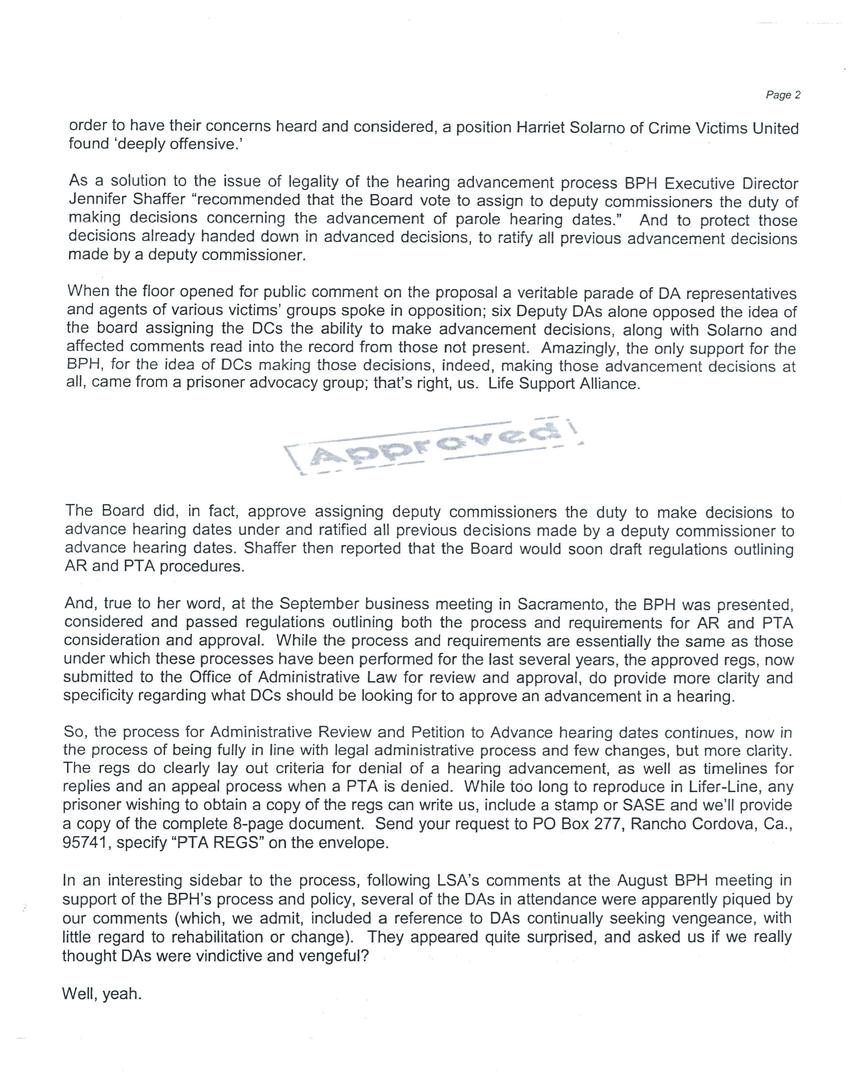 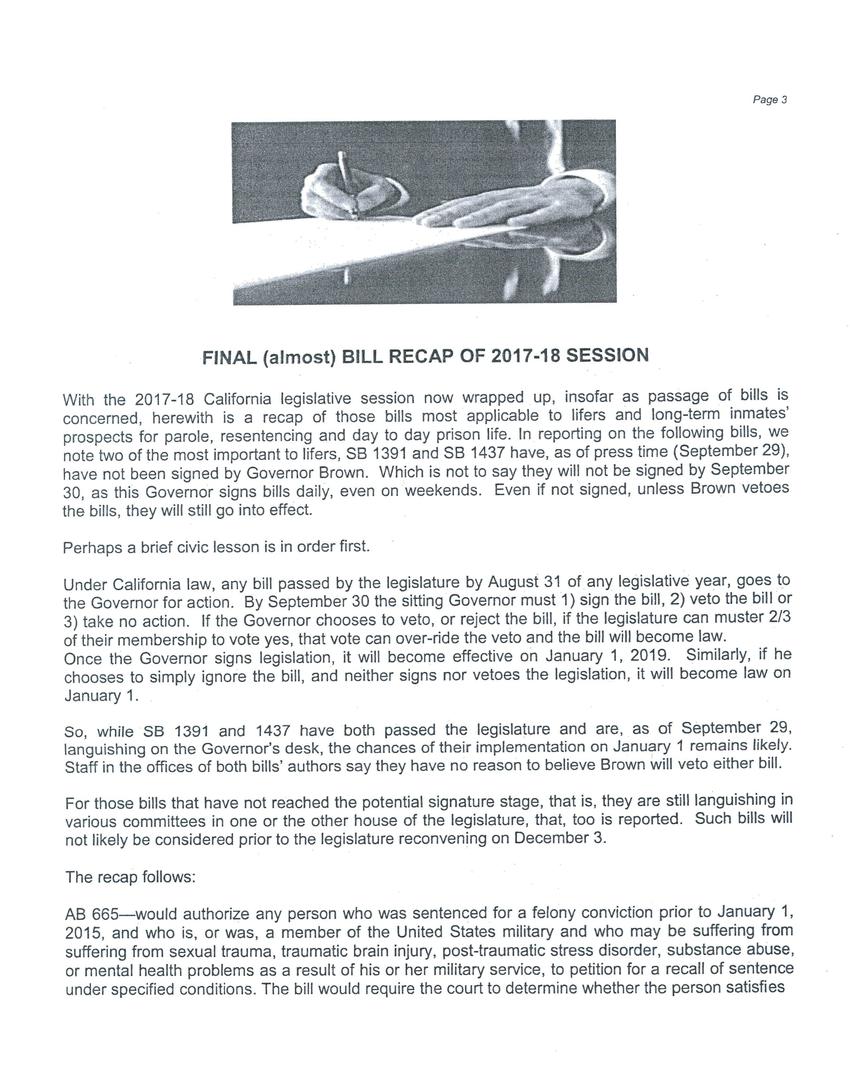 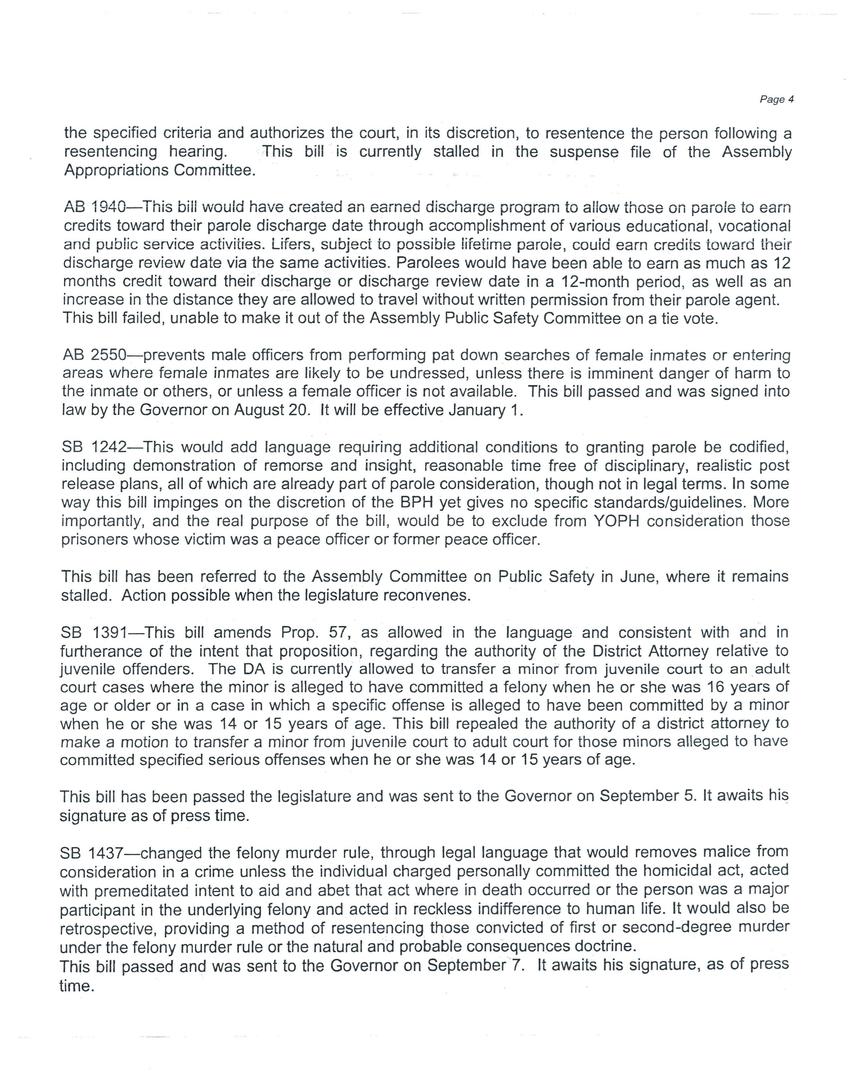 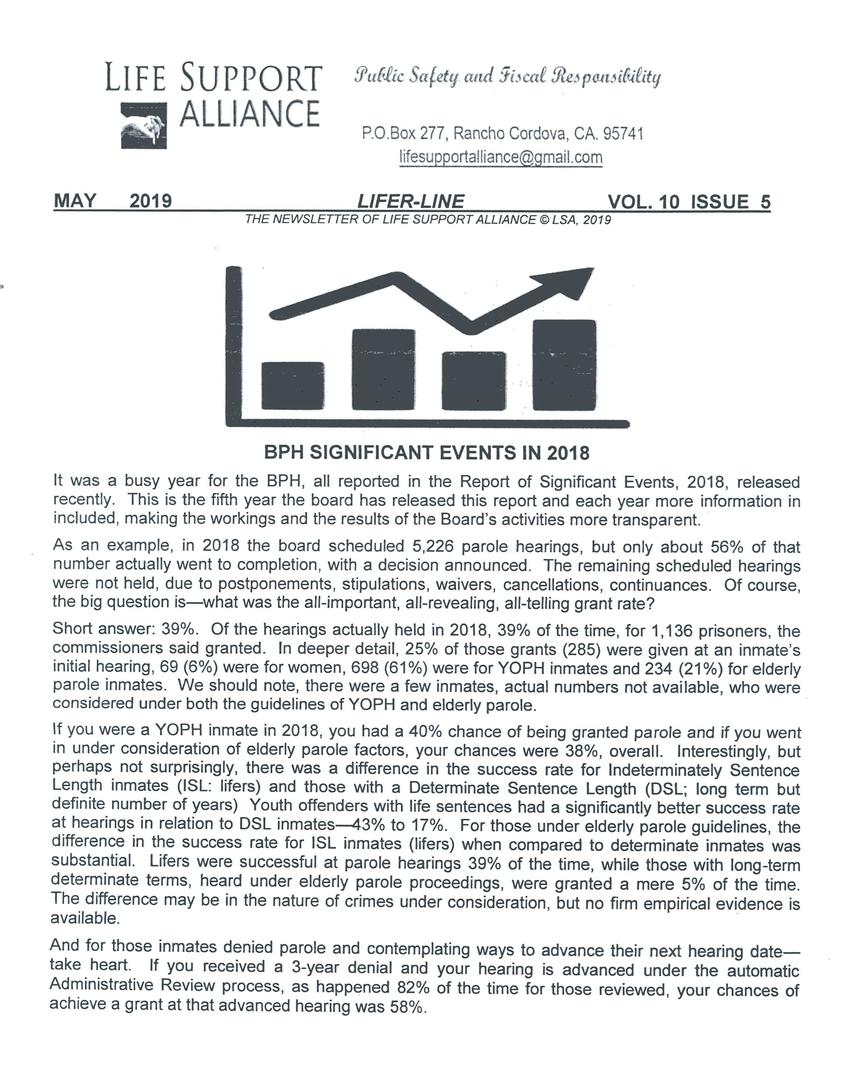 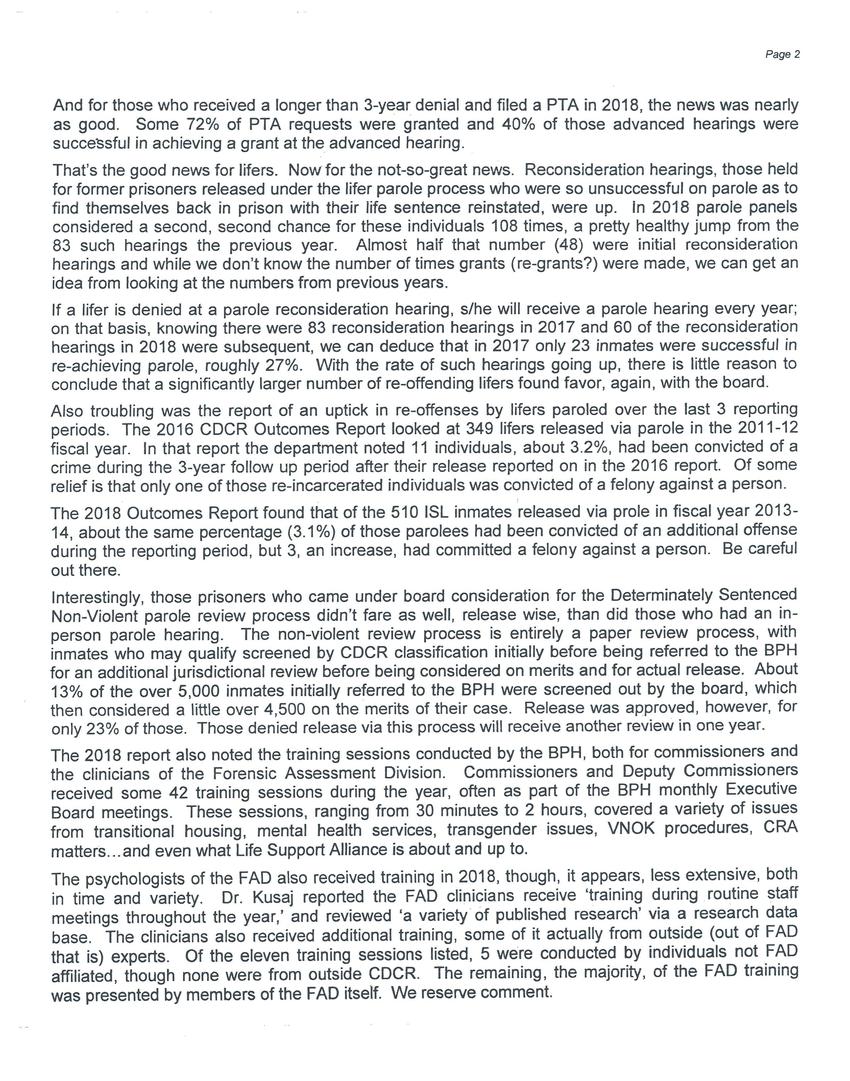 For the past two months BPH administration has been working to rectify an oversight in the board's Administrative Review and Petition to Advance process process that was exploited by the district attorneys' organizations and victims' groups in an effort to derail these processes that allow lifers denied parole to come back for hearings earlier than the denial length stated at their hearings. While the DAs bashed, berated and belittled those in prison reform who, a few years ago following the creation of the FAD, used a similar oversight to challenge that process, they showed no hesitation, hindsight or humility in self-righteously claiming the board to be promulgating an underground regulation regarding AR and PTAs.

A brief and perfunctory recap of the situation is this: in early August the Orange County Superior Court ruled in Rackauckas v State of California that the board, in not officially and formally giving Deputy Commissioners the duty and authority to make decisions to advance parole hearings under the PTA and AR process, had thus created an underground regulation. The DAs, in bringing this issue to the court, decided to pad their legal argument by focusing on a particular inmate's case, enfolding the victims' family in that case, making the claim that to advance hearings is to inflict 'harm' on those victims.

To support that argument, they prevailed on not only the victims' in the initial case under scrutiny in the suit, but also to victims' groups far and wide. While the OC Superior Court in its ruling did not outline what 'harm' the victims would suffer, victims' groups representatives, appeared at the August BPH monthly meeting, to sanctimoniously declare simply knowing about an advanced hearing was harmful to them. The various organizations and individuals also took umbrage at a statement contained in the board's reply to that charge that any harm to victims via advanced hearings was 'self-inflicted' harm, as there is no requirement that any victim appear in person at a parole hearing in order to have their concerns heard and considered, a position Harriet Solarno of Crime Victims United found 'deeply offensive'.

When the floor opened for public comment of the proposal a veritable parade of DA representatives and agents of various victims' groups spoke in opposition; six Deputy DAs alone opposed the idea of the board assigning the DCs the ability to make advancement decisions, along with Solarno and affected comments read into the record from those not present. Amazingly, the only support for the BPH, for the idea of DCs making those decisions, indeed, making those advancement decisions at all, came from a prisoner advocacy group; that's right, us. Life Support Alliance.

And, true to her word, at the September business meeting in Sacramento, the BPH was presented, considered and passed regulations outlining both the process and requirements for AR and PTA consideration and approval. While the process and requirements are essentially the same as those under which these processes have been performed for the last several years, the approved regs, now submitted to the Office of Administrative Law for review and approval, do provide more clarity and specificity regarding what DCs should be looking for to approve an advancement in a hearing.

So, the process for Administrative Review and Petition to Advance hearing dates continues, now in the process of being fully in line with legal administrative process and few changes, but more clarity. The regs do clearly lay out criteria for denial of a hearing advancement, as well as timelines for replies and an appeal process when a PTA is denied. While too long to reproduce in Lifer-Line, any prisoner wishing to obtain a copy of the regs can write us, include a stamp or SASE and we'll provide a copy of the complete 8-page document. Send your request to PO Box 277, Rancho Cordova, Ca., 95741, specify "PTA REGS" on the envelope.

In an interesting sidebar to the process, following LSA's comments at the August BPH meeting in support of the BPH's process and policy, several of the DAs in attendance were apparently piqued by our comments (which, we admit, included a reference to DAs continually seeking vengeance, with little regard to rehabilitation or change). They appeared quite surprised, and asked us if we really thought DAs were vindictive and vengeful?

With the 2017-18 California legislative session now wrapped up, insofar as passage of bills is concerned, herewith is a recap of those bills most applicable to lifers and long-tern inmates' prospects for parole, resentencing and day to day prison life. In reporting on the following bills, we note two of the most important to lifers, SB 1391 and SB 1437 have, as of press time (September 29), have not been signed by Governor Brown. Which is not to say they will not be signed by September 30, as this Governor signs bills daily, even on weekends. Even if not signed, unless Brown vetoes the bills, they will still go into effect.

Perhaps a brief civic lesson is in order first.

So, while SB 1391 and 1437 have both passed the legislature and are, as of September 29, languishing on the Governor's desk, the chances of their implementation on January 1 remains likely. Staff in the offices of both bills' authors say they have no reason to believe Brown will veto either bill.

For those bills that have not reached the potential signature stage, that is, they are still languishing in various committees in one or the other house of the legislature, that, too is reported. Such bills will not likely be considered prior to the legislature reconvening on December 3.

AB 665 - would authorize any person who was sentenced for a felony conviction prior to January 1, 2015, and who is, or was, a member of the United States military and who may be suffering from sexual trauma, traumatic brain injury, post-traumatic stress disorder, substance abuse, or mental health problems as a result of his or her military service, to petition for a recall of sentence under specified conditions. The bill would require the court to determine whether the person satisfies the specified criteria and authorizes the court, in its discretion, to resentence the person following a resentencing hearing. This bill is currently stalled in the suspense file of the Assembly Appropriations Committee.

AB 1940 - This bill would have created an earned discharge program to allow those on parole to earn credits toward their parole discharge date through accomplishment of various educational, vocational and public service activities. Lifers, subject to possible lifetime parole, could earn credits toward their discharge review date via the same activities. Parolees would have been able to earn as much as 12 months credit toward their discharge or discharge review date in a 12-month period, as well as an increase in the distance they are allowed to travel without written permission from their parole agent. This bill failed, unable to make it out of the Assembly Public Safety Committee on a tie vote.

AB 2550 - prevents male officers from performing pat down searches of female inmates or entering areas where female inmates are likely to be undressed, unless there is imminent danger of harm to the inmate or others, or unless a female officer is not available. The bill passed and was signed into law by the Governor on August 20. It will be effective January 1.

SB 1242 - This would add language requiring additional conditions to granting parole be codified, including demonstration of remorse and insight, reasonable time free of disciplinary, realistic post release plans, all of which are already part of parole consideration, though not in legal terms. In some way this bill impinges on the discretion of the BPH yet gives no specific standards/guidelines. More importantly, ad the real purpose of the bill, would be to exclude from YOPH consideration those prisoners whose victims was a peace officer or former peace officers.

This bill has been referred to the Assembly Committee on Public Safety in June, where it remains stalled. Action possible when the legislature reconvenes.

SB 1391 - This bill amends Prop. 57, as allowed in the language and consistent with and in furtherance of the intent that proposition regarding the authority of the District Attorney relative to juvenile offenders. The DA is currently allowed to transfer a minor from juvenile court to an adult court cases where the minor is alleged to have committed a felony when he or she was 16 years of age or older or in a case in which a specific offense is alleged to have been committed by a minor when he or she was 14 or 15 years of age. This bill repealed the authority of a district attorney to make a motion to transfer a minor from juvenile court to adult court for those minors alleged to have committed specified serious offenses when he or she was 14 or 15 year of age.