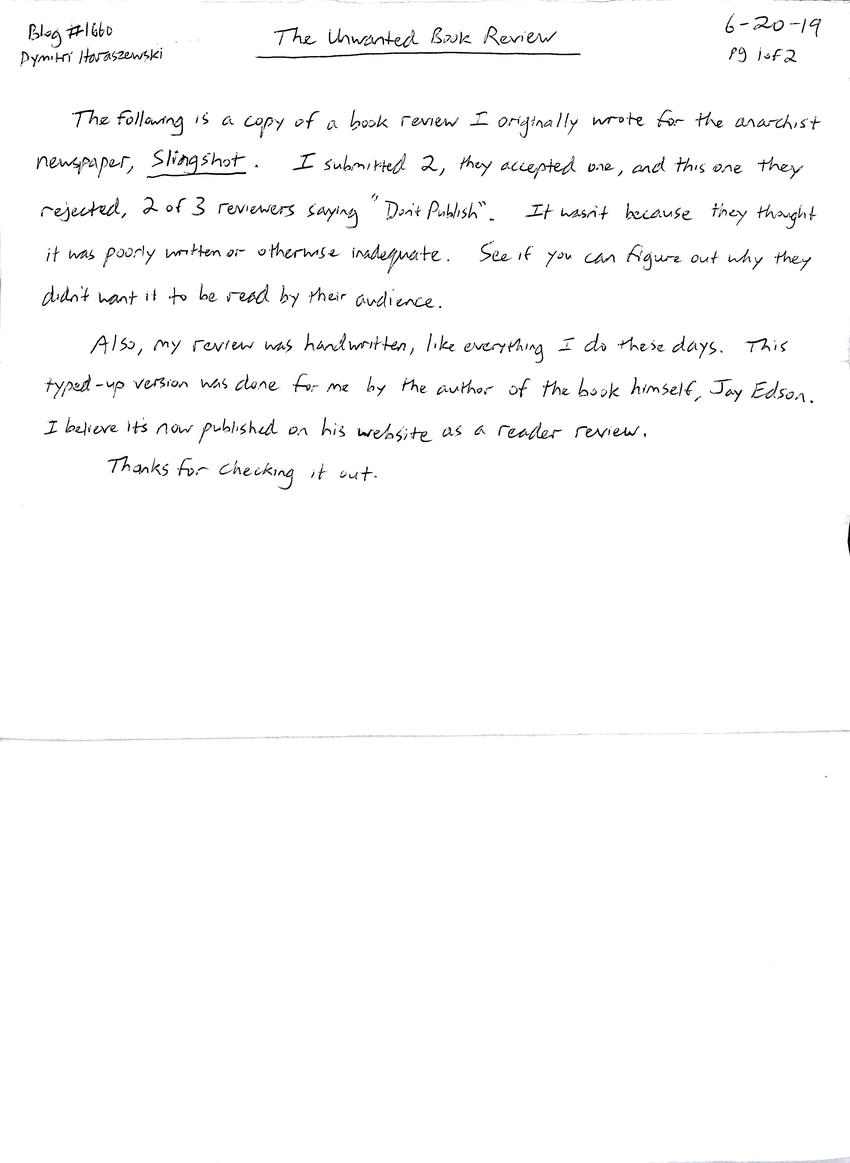 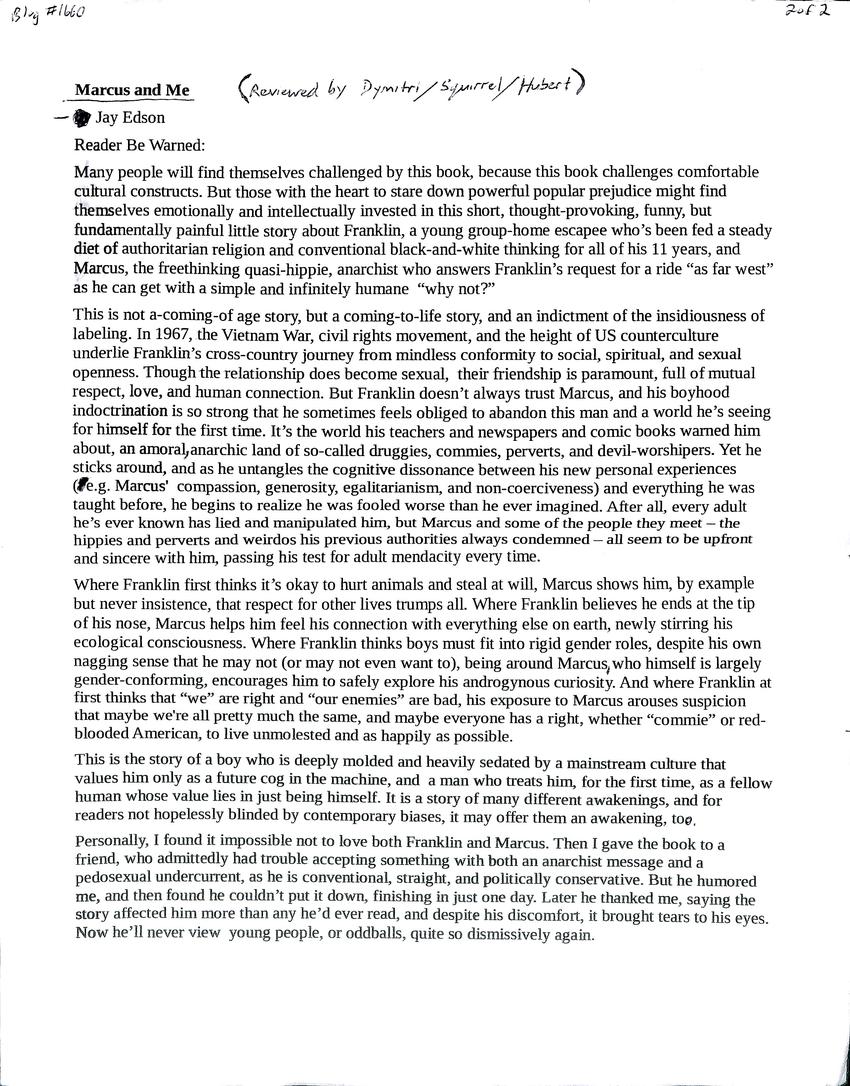 The following is a copy of a book review I originally wrote for the anarchist newspaper, Slingshot. I submitted 2, they accepted one, and this one they rejected, 2 of 3 reviewers saying "Don't Publish." It wasn't because they thought it was poorly written or otherwise inadequate. See if you can figure out why they didn't want it to be read by their audience.
Also, my review was handwritten, like everything I do these days. This typed-up version was done for me by the author of the book himself, Jay Edson. I believe it's now published on his website as a reader review. Thanks for checking it out.

Marcus and Me
(Reviewed by Dymitri/Squirrel/Hubert)
-Jay Edson

Many people will find themselves challenged by this book, because this book challenges comfortable cultural constructs. But those with the heart to stare down powerful popular prejudice might find themselves emotionally and intellectually invested in this short, thought-provoking, funny, but fundamentally painful little story about Franklin, a young group-home escapee who's been fed a steady diet of authoritarian religion and conventional black-and-white thinking for all of his 11 years, and Marcus, the freethinking quasi-hippie, anarchist who answers Franklin's request for a ride "as far west" as he can get with a simple and infinitely humane "why not?"

This is not a-coming-of age story, but a coming-to-life story, and an indictment of the insidiousness of labeling. In 1967, the Vietnam War, civil rights movement, and the height of US counterculture underlie Franklin's cross-country journey from mindless conformity to social, spiritual, and sexual openness. Though the relationship does become sexual, their friendship is paramount, full of mutual respect, love, and human connection. But Franklin doesn't always trust Marcus, and his boyhood for himself for the first time. It's the world his teachers and newspapers and comic books warned him about, an amoral, anarchic land of so-called druggies, commies, perverts, and devil-worshippers. Yet he sticks around, and as he untangles the cognitive dissonance between his new personal experiences (e.g. Marcus' compassion, generosity, egalitarianism, and non-coerciveness) and everything he was taught before, he begins to realize he was fooled worse than he imagined. After all, every adult he's ever known has lied and manipulated him, but Marcus and some of the people they meet — the hippies and perverts and weirdos his previous authorities always condemned — all seem to be upfront and sincere with him, passing his test for adult mendacity every time.

Where Franklin first thinks it's okay to hurt animals and steal at will, Marcus shows him, by example but never insistence, that respect for other lives trumps all. Where Franklin believes he ends up at the tip of his nose, Marcus helps him feel his connection with everything else on earth, newly stirring his ecological consciousness. Where Franklin thinks boys must fit into rigid gender roles, despite his own nagging sense that he may not (or may not even want to), being around Marcus, who himself is largely gender-conforming, encourages him to safely explore his androgynous curiosity. And where Franklin at first thinks that "we" are right and "our enemies" are bad, his exposure to Marcus arouse suspicion that maybe we're all pretty much the same, and maybe everyone has a right, whether "commie" or red-blooded American, to live unmolested and as happily as possible.

This is the story of a boy who is deeply molded and heavily sedated by a mainstream culture that values him only as a future cog in the machine, and a man who treats him, for the first time, as a fellow human whose value lies in just being himself. It is a story of many different awakenings, and for readers not hopelessly blinded by contemporary biases, it may offer them an awakening, too.

Personally, I found it impossible not to love both Franklin and Marcus. Then I gave the book to a friend, who admittedly had trouble accepting something with both an anarchist message and pedosexual undercurrent, as he is conventional, straight, and politically conservative. But he humored me, and then found he couldn't put it down, finishing in just one day. Later he thanked me, saying the story affected him more than any he'd ever read, and despite his discomfort, it brought tears to his eyes. Now he'll never view young people, or oddballs, quite so dismissively again.

Fascinating book. I gotta check it out at some point.