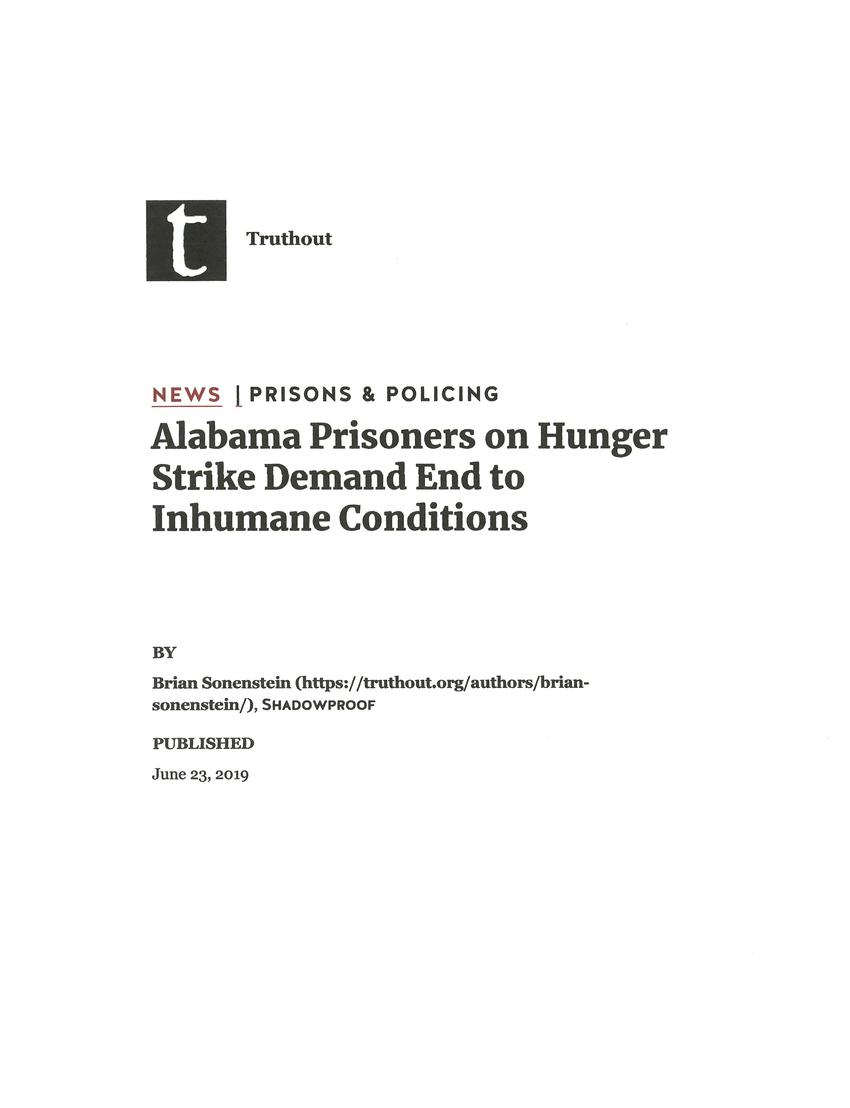 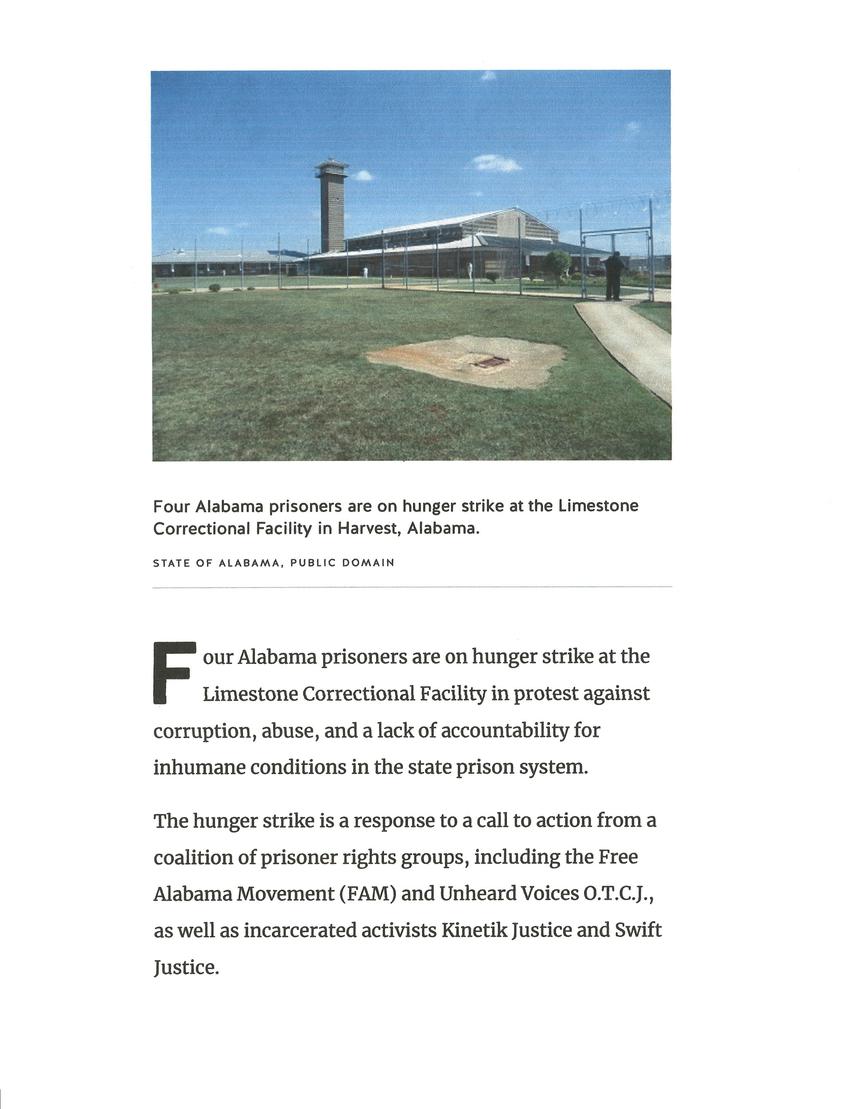 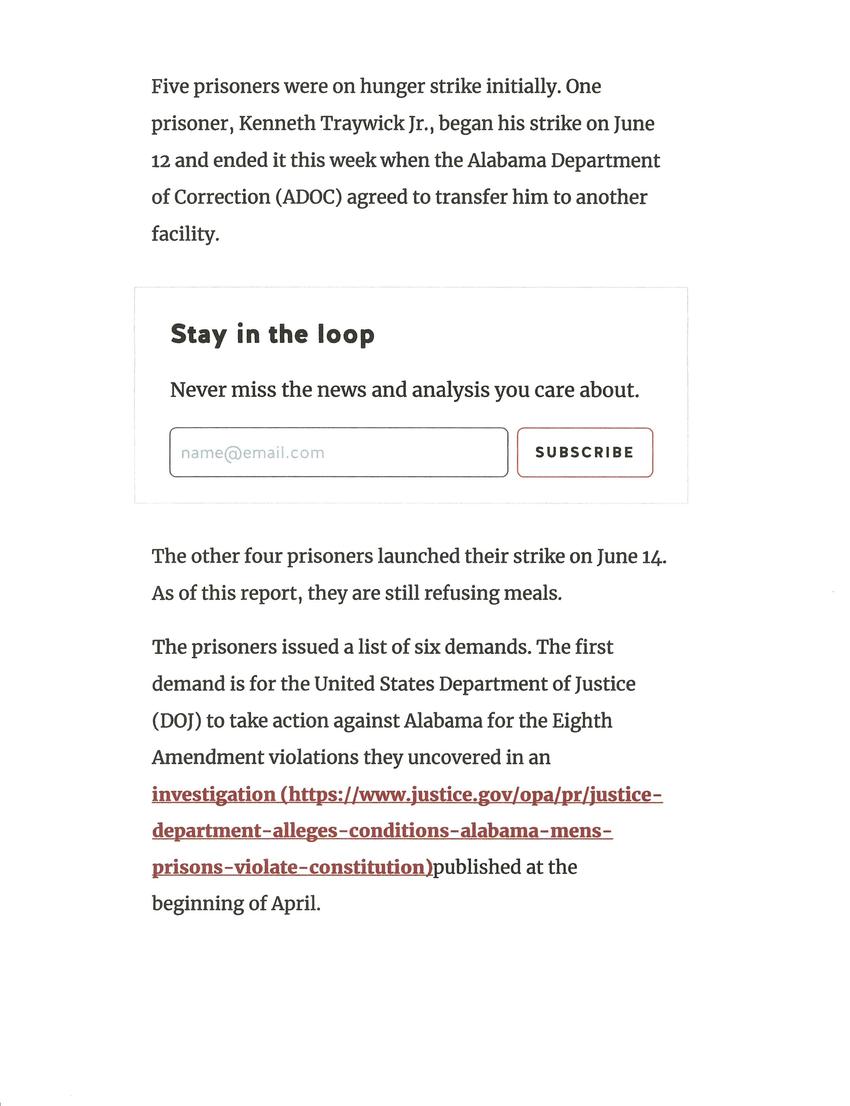 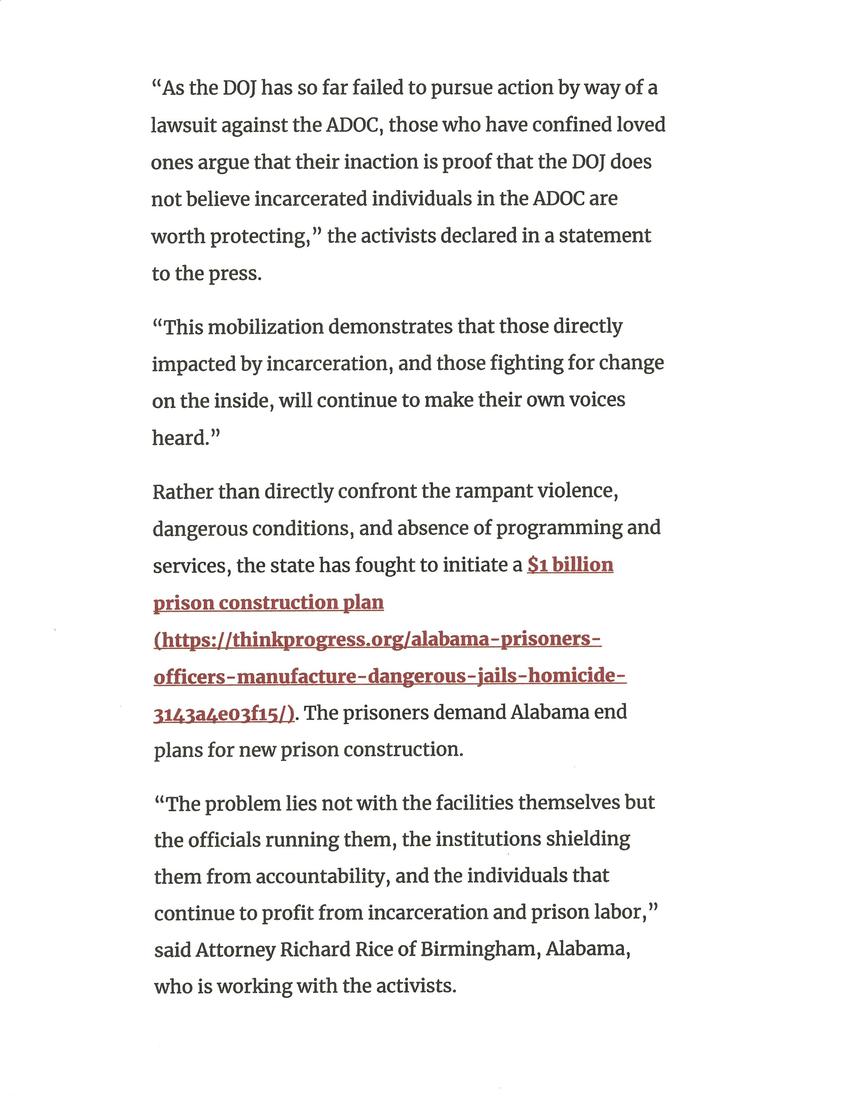 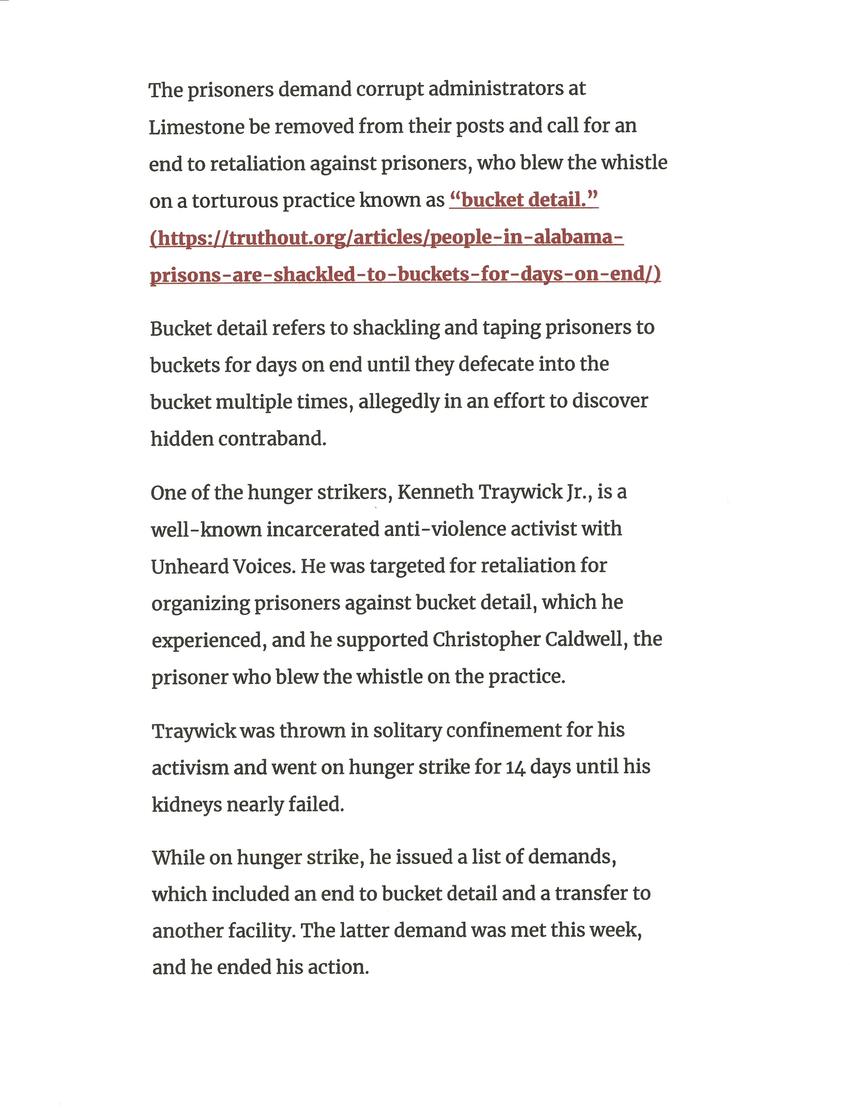 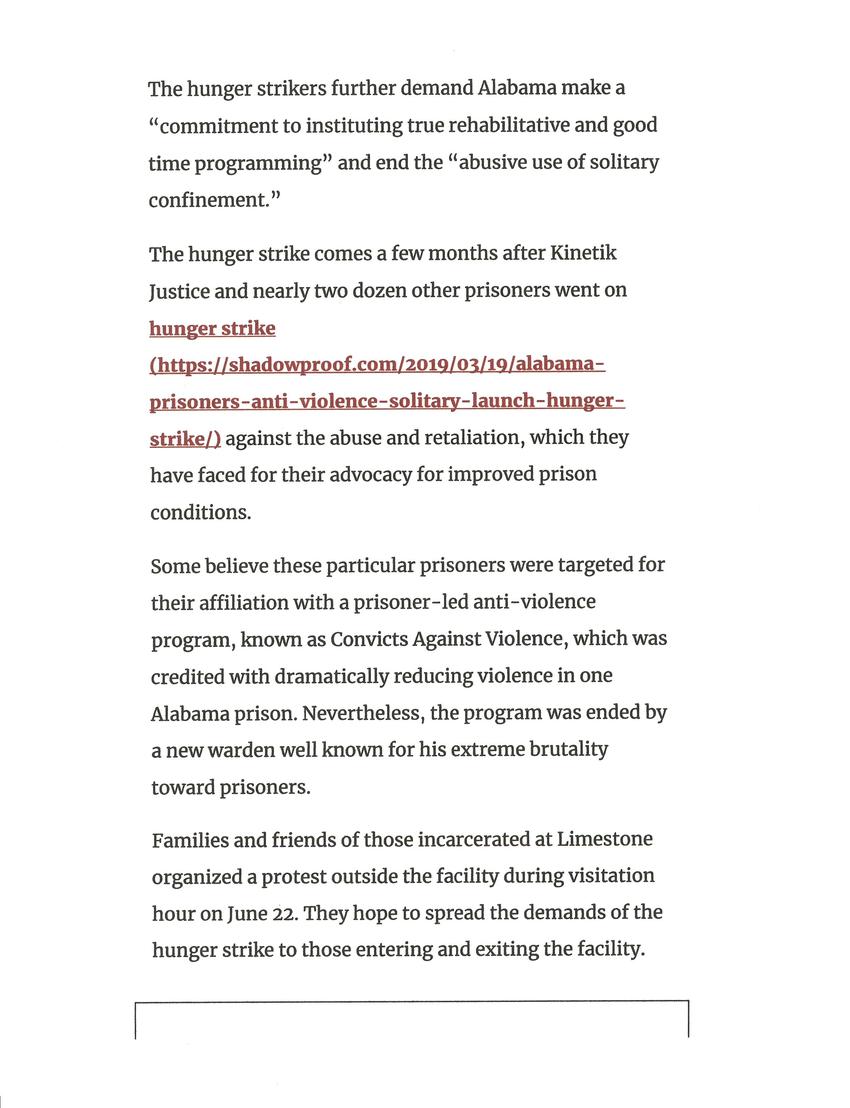 The hunger strike is a response to a call to action from a coalition of prisoner rights groups, including the Free Alabama Movement (FAM) and Unheard Voices O.T.C.J., as well as incarcerated activists Kinetik Justice and Swift Justice.

Five prisoners were on hunger strike initially. One prisoner, Kenneth Traywick Jr., began his strike on June 12 and ended it this week when the Alabama Department of Correction (ADOC) agreed to transfer him to another facility.

The other four prisoners launched their strike on June 14. As of this report, they are still refusing meals.

The prisoners issued a list of six demands. The first demand is for the United States Department of Justice (DOJ) to take action against Alabama for the Eighth Amendment violations they uncovered in an investigation published at the beginning of April.

“As the DOJ has so far failed to pursue action by way of a lawsuit against the ADOC, those who have confined loved ones argue that their inaction is proof that the DOJ does not believe incarcerated individuals in the ADOC are worth protecting,” the activists declared in a statement to the press.

“This mobilization demonstrates that those directly impacted by incarceration, and those fighting for change on the inside, will continue to make their own voices heard.”

Rather than directly confront the rampant violence, dangerous conditions, and absence of programming and services, the state has fought to initiate a $1 billion prison construction plan. The prisoners demand Alabama end plans for new prison construction.

“The problem lies not with the facilities themselves but the officials running them, the institutions shielding them from accountability, and the individuals that continue to profit from incarceration and prison labor,” said Attorney Richard Rice of Birmingham, Alabama, who is working with the activists.

The prisoners demand corrupt administrators at Limestone be removed from their posts and call for an end to retaliation against prisoners, who blew the whistle on a torturous practice known as “bucket detail.”

Bucket detail refers to shackling and taping prisoners to buckets for days on end until they defecate into the bucket multiple times, allegedly in an effort to discover hidden contraband.

One of the hunger strikers, Kenneth Traywick Jr., is a well-known incarcerated anti-violence activist with Unheard Voices. He was targeted for retaliation for organizing prisoners against bucket detail, which he experienced, and he supported Christopher Caldwell, the prisoner who blew the whistle on the practice.

Traywick was thrown in solitary confinement for his activism and went on hunger strike for 14 days until his kidneys nearly failed.

While on hunger strike, he issued a list of demands, which included an end to bucket detail and a transfer to another facility. The latter demand was met this week, and he ended his action.

The hunger strikers further demand Alabama make a “commitment to instituting true rehabilitative and good time programming” and end the “abusive use of solitary confinement.”

The hunger strike comes a few months after Kinetik Justice and nearly two dozen other prisoners went on hunger strike against the abuse and retaliation, which they have faced for their advocacy for improved prison conditions.

Some believe these particular prisoners were targeted for their affiliation with a prisoner-led anti-violence program, known as Convicts Against Violence, which was credited with dramatically reducing violence in one Alabama prison. Nevertheless, the program was ended by a new warden well known for his extreme brutality toward prisoners.

Families and friends of those incarcerated at Limestone organized a protest outside the facility during visitation hour on June 22. They hope to spread the demands of the hunger strike to those entering and exiting the facility.

The escape of three inmates from two different Mississippi prisons last week and reports of gangs running prisons are the results of over-incarceration without adequate funding to keep the public, prison staff and community safe, civil rights groups say.

On Friday, three inmates escaped from state prisons; one was captured but the other two were still on the loose early Tuesday.

“Mississippi has a mass incarceration problem," said Josh Tom, interim director of the ACLU of Mississippi.

House Corrections Chairman Bill Kinkade, R-Byhalia, said Tuesday he and other lawmakers are working with MDOC Commissioner Pelicia Hall on long-term solutions to problems within the prison system. He said the pay makes it difficult to attract qualified security officers, but the state is working to increase guard pay.

Kinkade said you can’t read too much into escapes and reports of gangs in prisons.

Kinkade said he has advocated and push for programs to help nonviolent offenders.

In 2014, Mississippi passed a sweeping criminal justice reform bill, House Bill 585, aimed at reducing prison population, cost and recidivism. This year, lawmakers passed further reform measures, including creation of more intervention courts for drug offenders and those with mental health issues, and waived some court fines and fees allow some nonviolent convictions to be expunged.

On the run: What we know about escaped inmates

However, some criminal justice reform advocates say the bill was too narrow in scope and won't help reduce the state's prison population.

Mississippi has the third highest prison incarceration rate in the country, according to the latest Bureau of Justice statistics.

The civil rights groups said in a joint press statement Tuesday that "MDOC has more than 500 unfilled guard positions, and new guards in Mississippi prisons are paid only approximately $2,100 per month.

"Recruiting has proven difficult, as evidenced by the fact that during the most recent legislative session MDOC Commissioner Pelicia Hall requested $7 million to increase pay for MDOC’s more than 2,000 employees. The Legislature denied that request and gave MDOC only $1.5 million to be used for salary increases."

"Mississippi politicians talk about how tough they are when it comes to fighting crime, but we need to ask whether they are being smart,” said Cliff Johnson, director of the MacArthur Justice Center. “You can’t throw people in prison for years on end for every offense under the sun and then act shocked when the prison population swells to 20,000 and you can’t afford the astronomical price tag that goes along with having one of the highest incarceration rates in the world."

Last year, the Southern Poverty Law Center and other groups took the state of Mississippi to trial over alleged inhumane and unconstitutional conditions at the East Mississippi Correctional Facility.

This is a developing story.

Locked up: No cash for bail could mean months in jail. Innocence, guilt irrelevant.