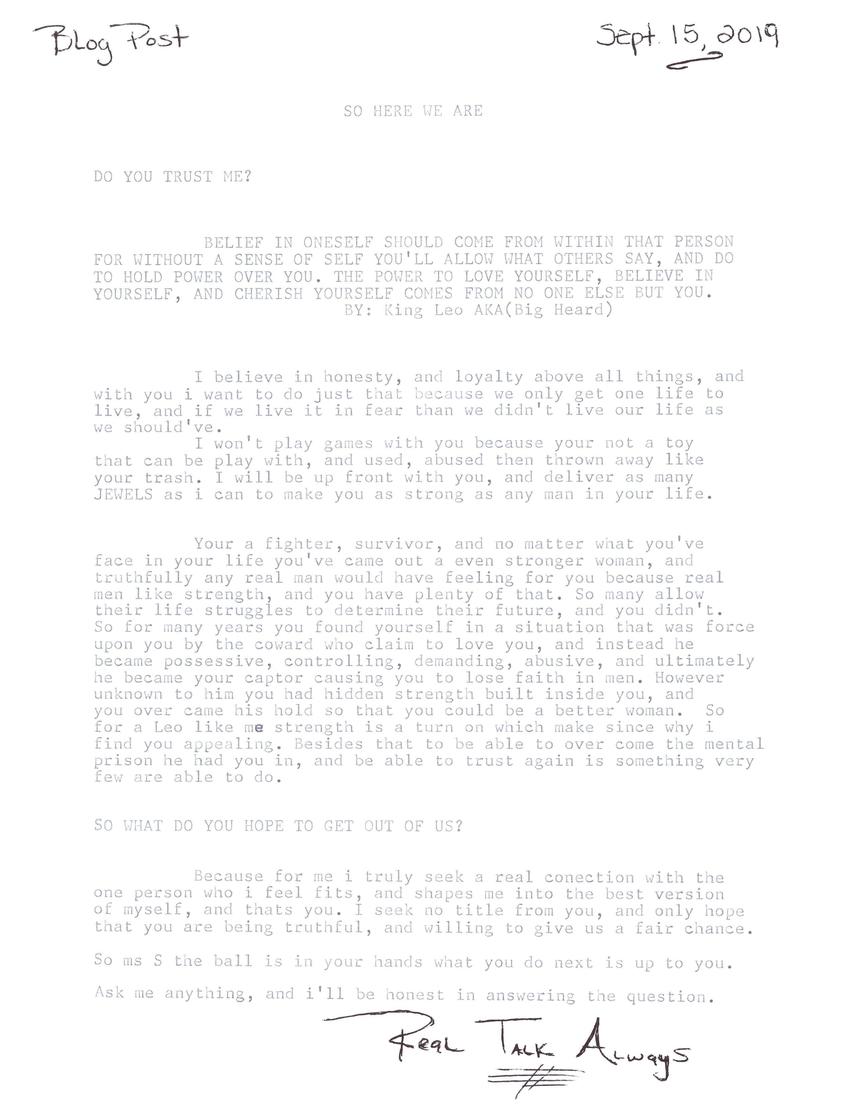 SO HERE WE ARE

Do you trust me?

Belief is oneself should come from within that person for without a sense of self you'll allow what other say, and do to hold power over you. The power to love yourself, believe in yourself, and cherish yourself comes from no one else but you.
—King Leo AKA Big Heard

I believe in honesty and loyalty above all things, and with you I want to do just that because we only get one life to live. And if we live it in fear, then we didn't live our life as we should've.

I won't play games with you because you're not a toy that can be played with, and used, and abused, and then thrown away like you're trash. I will be upfront with you and deliver as many JEWELS as I can to make you as strong as any man in your life.

You're a fighter, survivor, and no matter what you've faced in your life, you've came out an even stronger women. Truthfully, any real man would have feelings for you because real men like strength, and you have plenty of that. So many allow their life struggles to determine their future, and you didn't.

So for many years, you found yourself in a situation that was forced upon you by the coward who claimed to love you. Instead he became possessive, controlling, demanding, abusive, and ultimately he became your captor causing you to lose faith in men. However, unknown to him, you had hidden strength built inside you. You overcame his hold so that you could be a better woman.

So, for a Leo like me, strength is a turn on which is why I find you appealing. Besides that, to be able to overcome the mental prison he had in you and be able to trust again is something very few are able to do.

SO WHAT DO YOU HOPE TO GET OUT OF US?

Because for me, I truly seek a real connection with one person who I feel fits and shapes me into the best version of myself, and that's you. I seek no title from you, and only hope that you are being truthful and willing to give us a fair chance.

So, miss, the ball is in your hands. What you do next is up to you.

Ask me anything, and I'll be honest in answering the question.