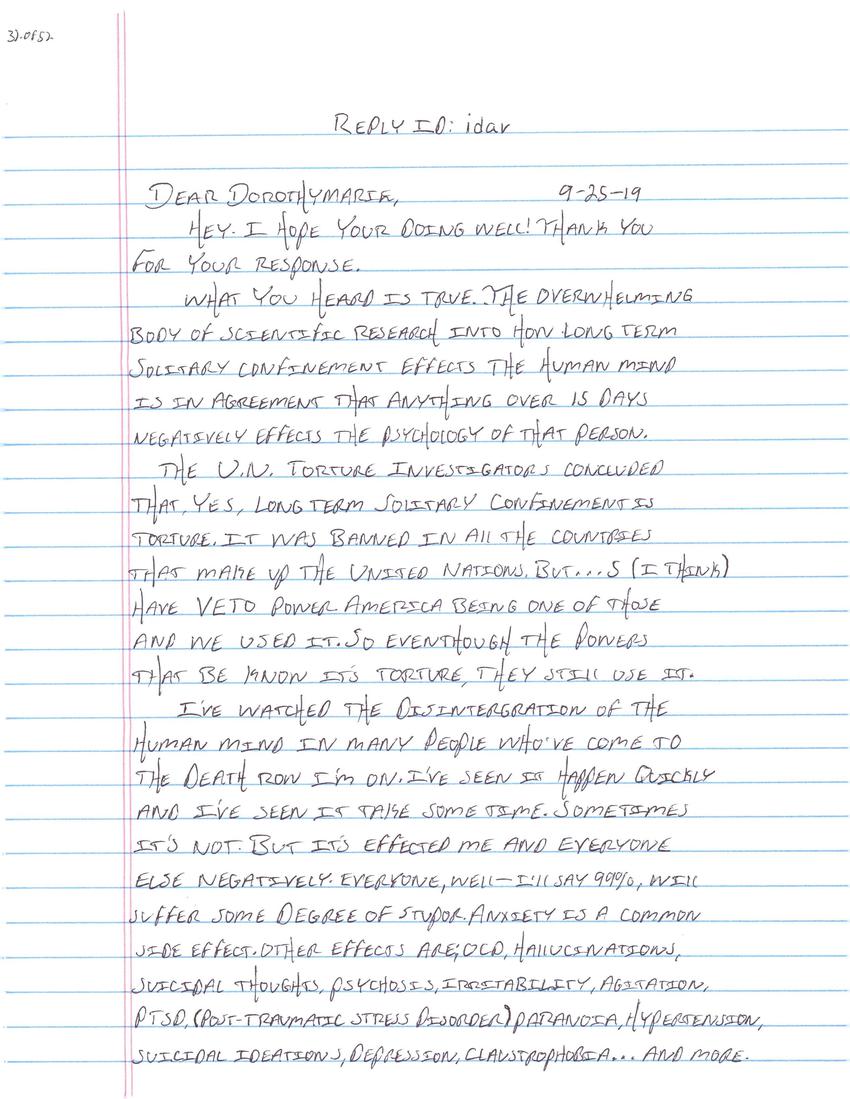 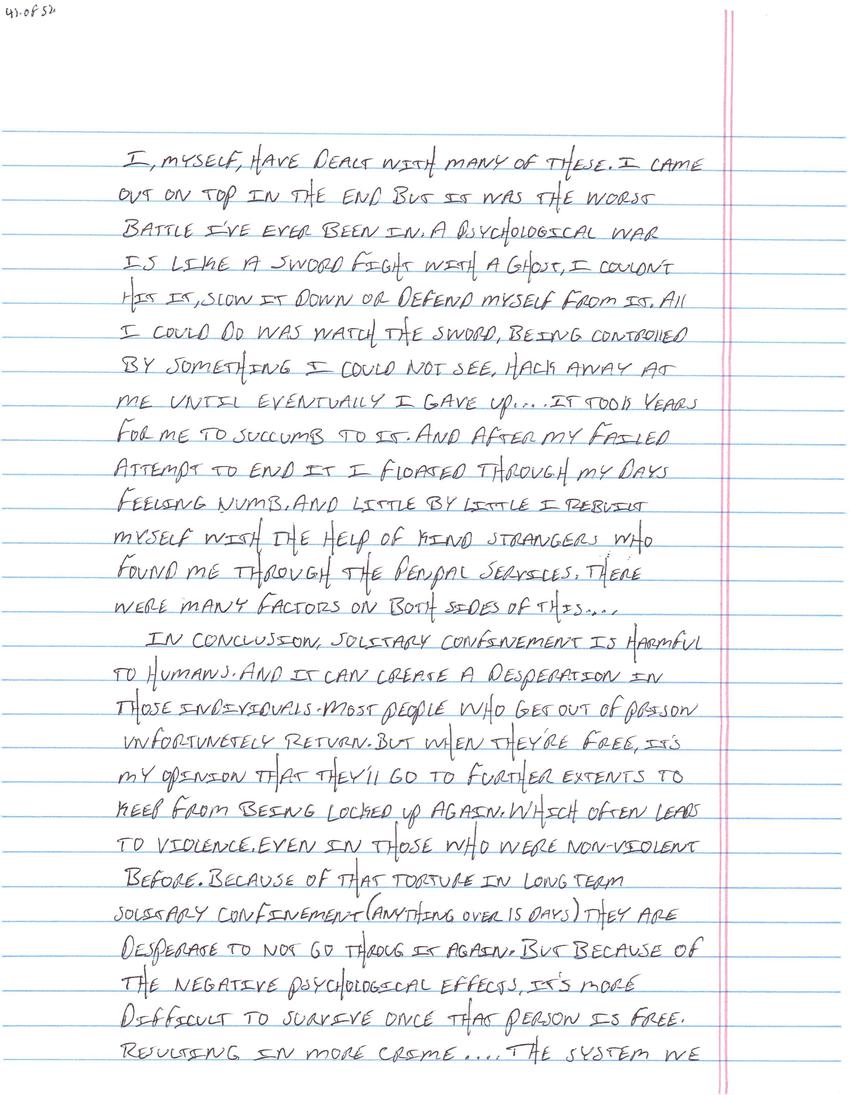 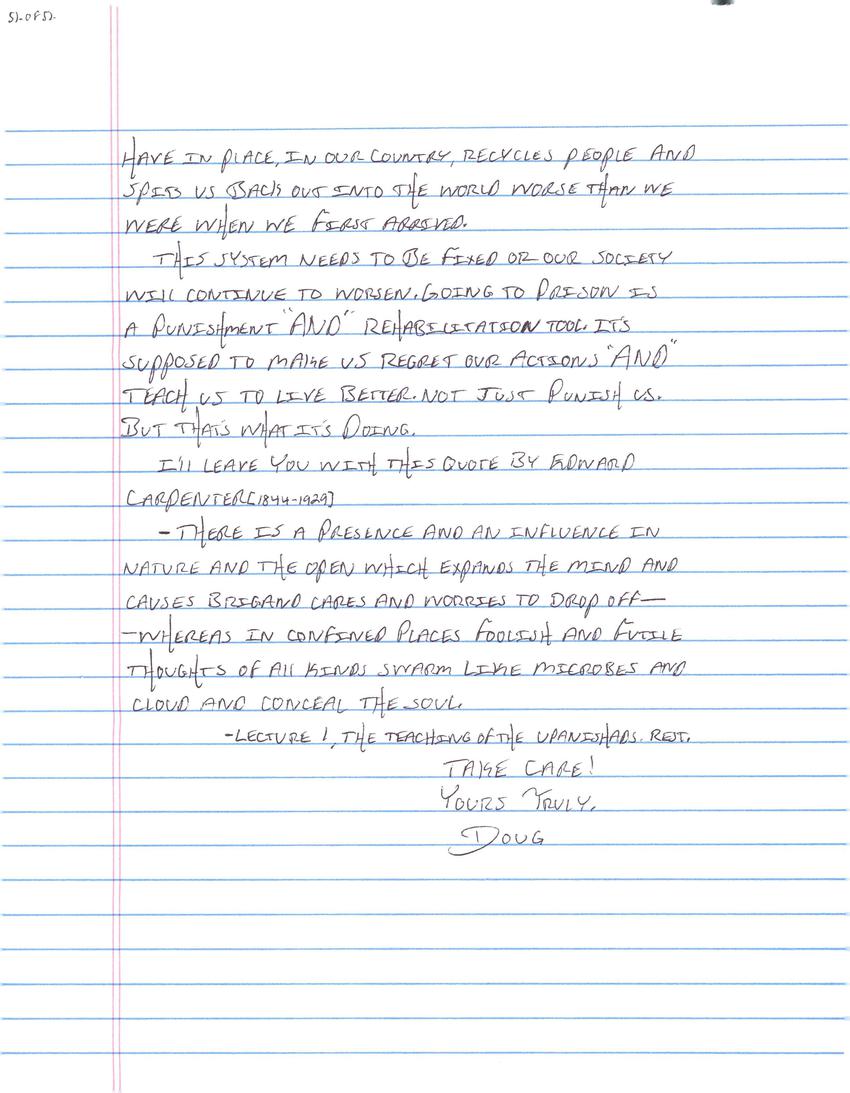 Dear DorothyMarie,
Hey, I hope you're doing well! Thank you for your response.

What you heard is true. The overwhelming body of scientific research into how long term solitary confinement affects the human mind is in agreement that anything over 15 days negatively affects the psychology of that person. The U.N. Torture Investigations concluded that, yes, long term solitary confinement is torture. It was banned in all the countries that made up the United Nations.

But... Five (I think) have veto power, America being one of those, and we used it. So, even though the powers that be know that it's torture, they still use it.

I've watched the disintegration of the human mind in many people who've come to the death row I'm in. I've seen it happen quickly, and I've seen it take some time. Sometimes it's not. But it's affected me and everyone else negatively. Everyone—well, I'll say 99%—will suffer some degree of stupor. Anxiety is a common side effect. Other effects are OCD, hallucinations, suicidal thoughts, psychosis, irritability, agitation, PTSD, paranoia, hypertension, suicidal ideations, depression, claustrophobia... and more.

I myself have dealt with many of these. I came out on top in the end, but it was the worst battle I've ever been in. A psychological war is like a sword fight with a ghost. I couldn't hit, slow it down or defend myself from it. All I could do was watch the sword being controlled by something I could not see, hack away at me until eventually I gave up. It took years for me to succumb to it. And after my failed attempt to end it, I floated through my days feeling numb. And little by little, I rebuilt myself with the help of kind strangers who found me through the pen pal services. There were many factors on both sides of this...

In conclusion, solitary confinement is harmful to humans. It can create a desperation in those individuals. Most people who get out of prison unfortunately return but when they're free, it's in my opinion that they'll go to further extents to keep from being locked up again. Which often leads to violence. Even in those who ere nonviolent before. Because of that torture in long term solitary confinement (anything over 15 days), they are desperate to not go through it again. But because of its negative psychological effects, it's more difficult to survive once that person is free, resulting in more crime.

The system we have in place in our country receives people and spits them back out into the world worse than we were when we were first arrested.

This system needs to be fixed or our society will continue to worsen. Going to prison is a punishment and rehabilitation tool. It's supposed to make us regret our actions and teach us to live better, not just punish us. But that's what it's doing.

I'll leave you with this quote by Edward Carpenter (1844-1927):
"There is a presence and an influence in nature and the open which expands the mind and causes brigand cares and worries to drop off—whereas in confined places foolish and futile thoughts of all kinds swarm like microbes and cloud and conceal the soul."
—Lecture 1, The Teaching of the Upanishads, rest.