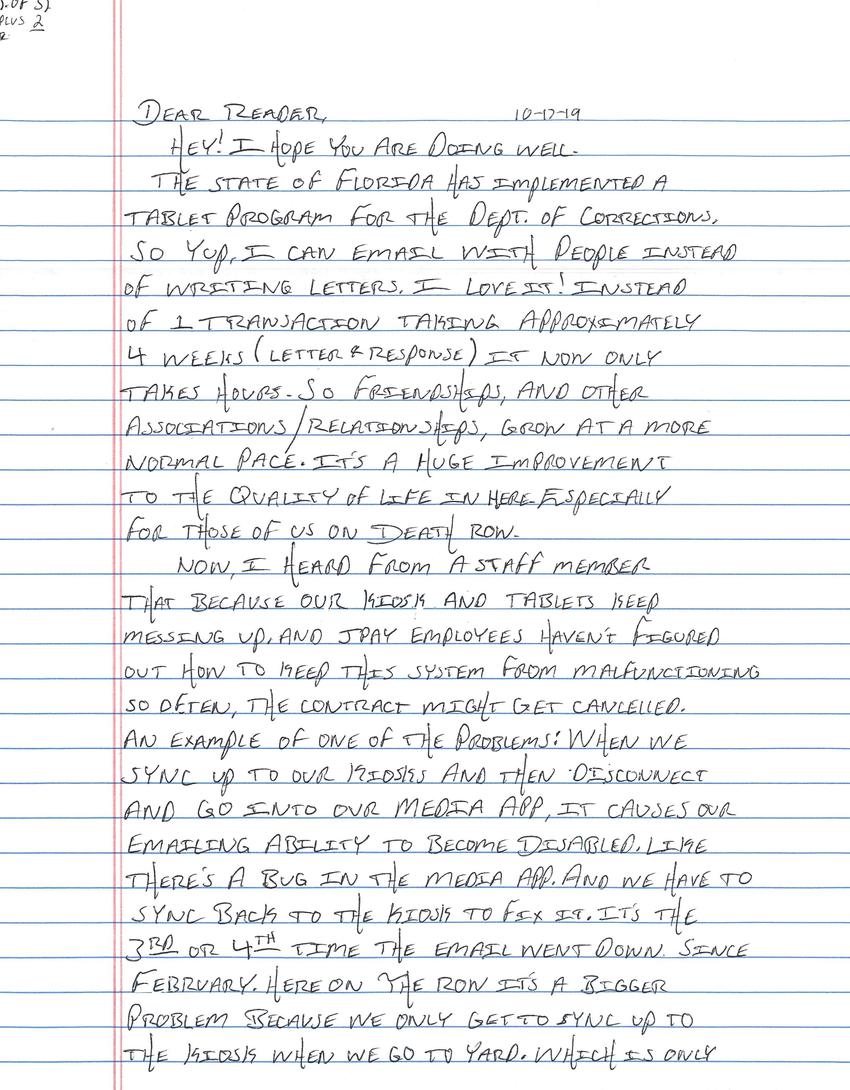 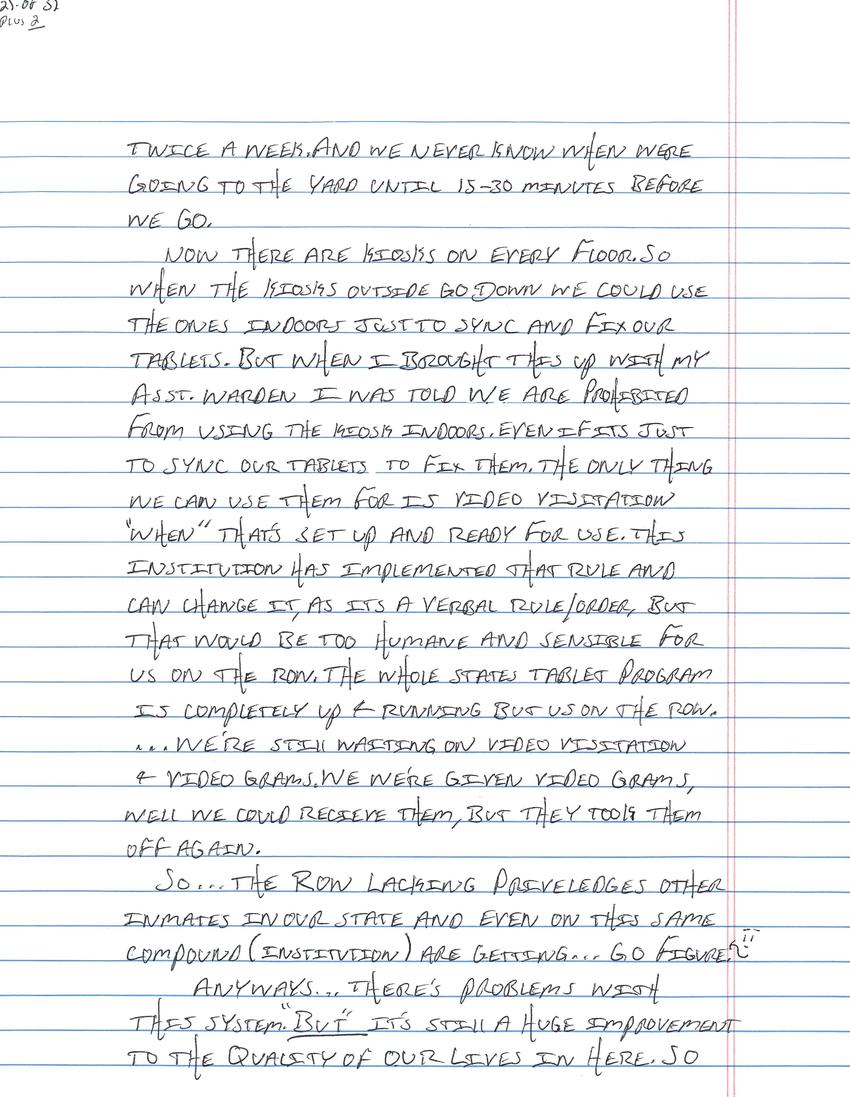 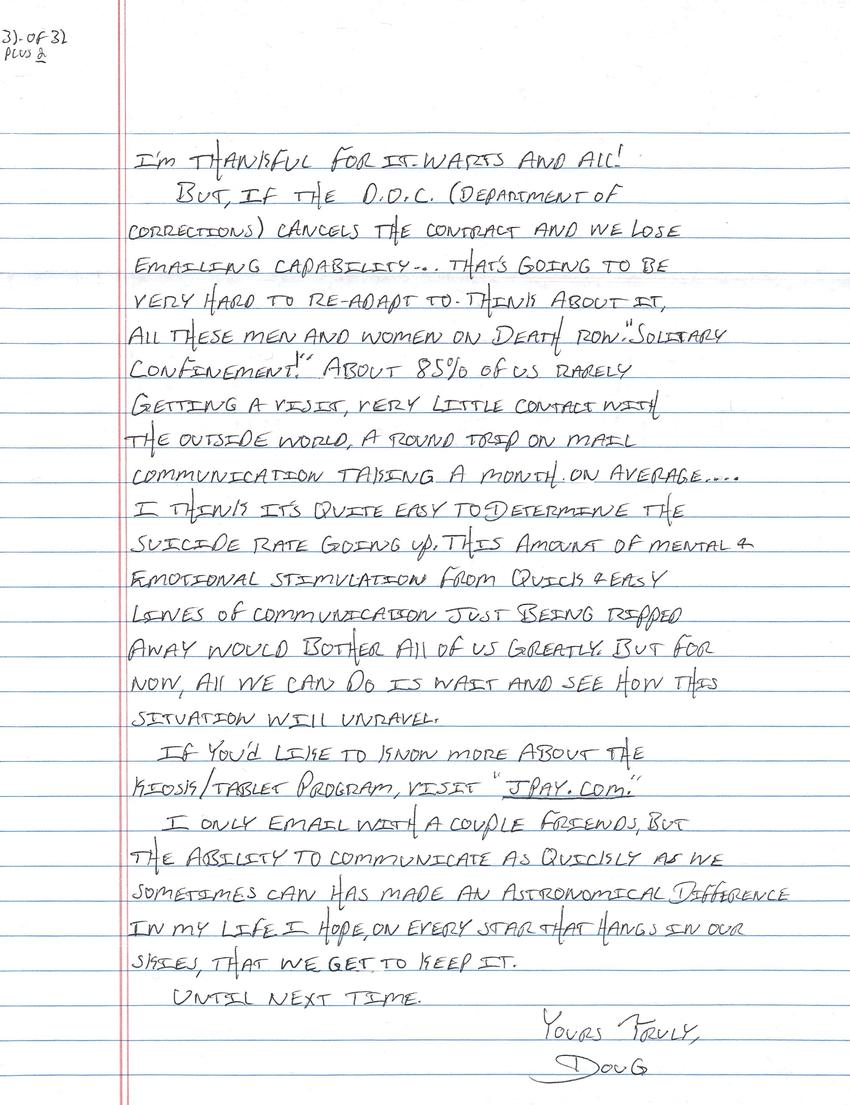 Dear Reader,
Hey! I hope you are doing well.

The state of Florida has implemented a tablet program for the Dept. of Corrections. So, yup, I can email with people instead of writing letters. I love it! Instead of one transaction taking approximately four weeks (letter and response), it now only takes hours. So, friendships and other associations/relationships grow at a more normal pace. It's a huge improvement to the quality of life in here. Especially for those of us on death row.

Now, I heard from a staff member that because our kiosk and tablets keep messing up and JPay employees haven't figured out how to keep this system from malfunctioning so often, the contract might get canceled.

An example of one of the problems: When we sync up to our kiosks and disconnect and go into our media app, it causes our emailing ability to become disabled. Like, there's a bug in the media app, and we have to sync back to the kiosk to fix it. It's the third or fourth time the email went down since February. Here on the row, it's a bigger problem because we only get to sync up to the kiosk when we go to yard, which is only twice a week. And we never know we're going to the yard until 15-30 minutes before we go.

Now there are kiosks on every floor, so when the kiosks outside go down, we could use the ones indoors just to sync and fix our tablets. But when I brought this up with my asst. warden, I was told we are prohibited from using the kiosk indoors. Even if it's just to sync our tablets to fix them. The only thing we can use them for is video visitation when that's set up and ready for use.

This institution has implemented that rule and can change it, as it's a verbal rule/order. But that would be too humane and sensible for us on the row. The whole state's tablet program is completely up and running but for us on the row. We're still waiting on video visitation and video grams. We were given video grams—well, we could receive them—but they took them off again.

So... the row lacking privileges other inmates in our state and even on this same compound are getting. Go figure. :/

Anyways, there's problems with this system. But it's still a huge improvement to the quality of our lives in here. So, I'm thankful for it. Warts and all!

But, if the DOC (Department of Corrections) cancels the contract and we lose email capability, that's going to be very hard to re-adapt to. Think about it: all these men and women on death row—solitary confinement! About 85% of us rarely get a visit, very little contact with the outside world, a round trip on mail communication taking a month on average. I think it's quite easy to determine the suicide rate going up. This amount of mental and emotional stimulation from quick and easy lines of communication just being ripped away would bother all of us greatly.

But for now, all we can do is wait and see how this situation will unravel.

If you'd like to know more about the kiosks/tablet program, visit jpay.com.

I only email with a couple friends, but the ability to communicate as quickly as we sometimes can has made an astronomical difference in my life. I hope on every star that hangs in our skies that we get to keep it.