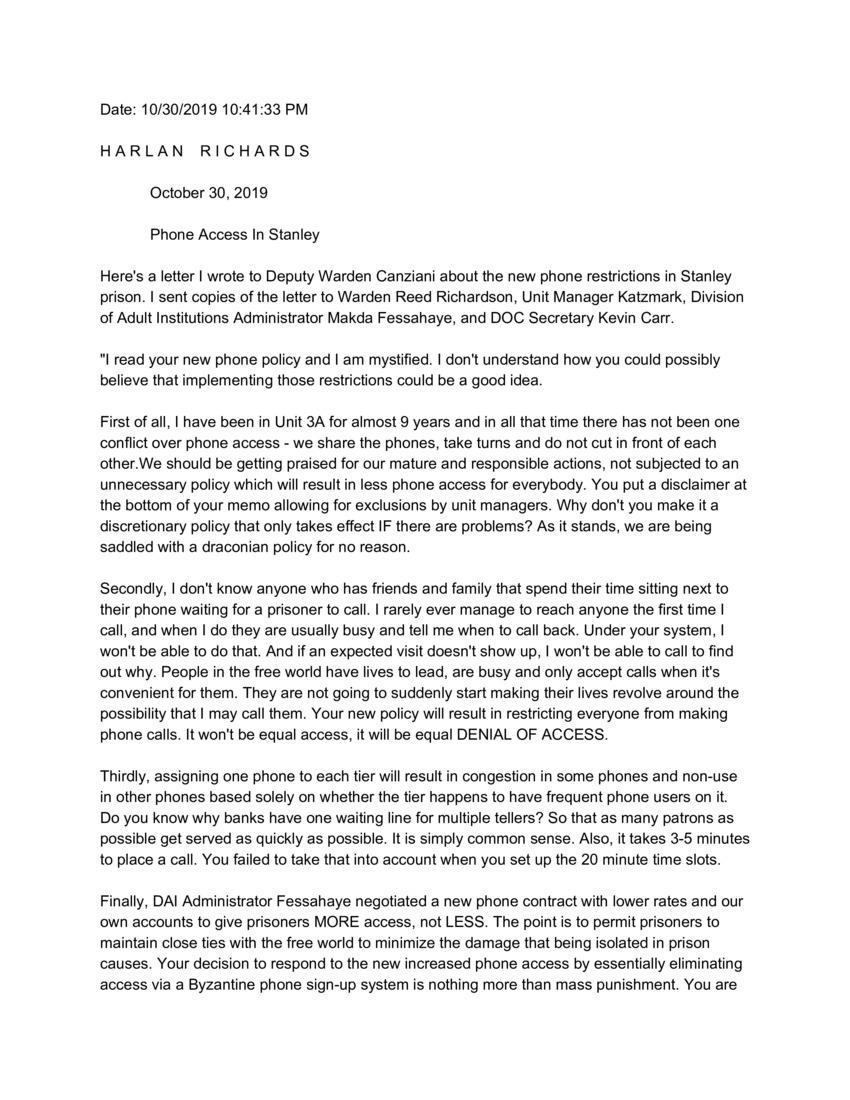 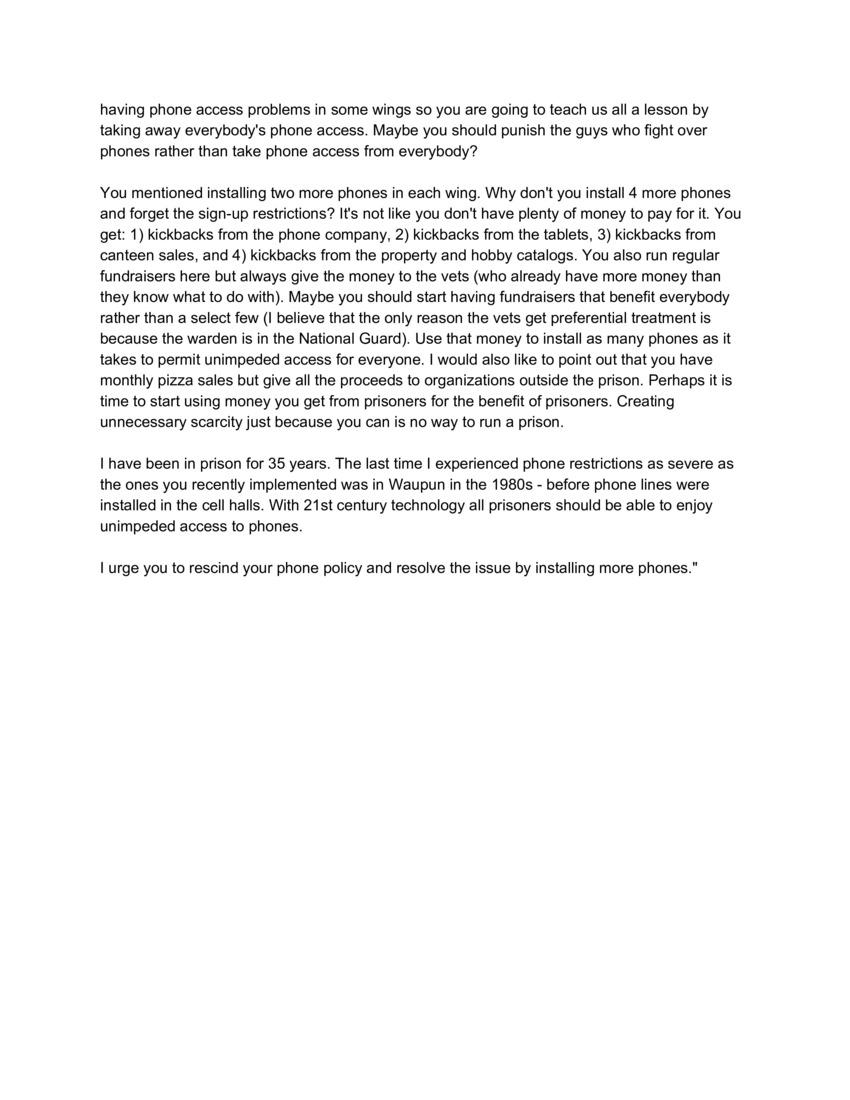 "I read your new phone policy and I am mystified. I don't understand how you could possibly believe that implementing those restrictions could be a good idea.

First of all, I have been in Unit 3A for almost nine years and, in all that time, there has not been one conflict over phone access. We share the phones, take turns, and do not cut in front of each other. We should be getting praised for our mature and responsible actions, not subjected to an unnecessary policy which will result in less phone access for everybody.

You put a disclaimer at the bottom of your memo allowing for exclusions by unit managers. Why don't you make it a discretionary policy that only takes effect IF there are problems? As it stands, we are being saddled with a draconian policy for no reason.

Secondly, I don't know anyone who has friends and family who will spend their time sitting next to their phone waiting for a prisoner to call. I rarely ever manage to reach anyone the first time I call and when I do, they are usually busy and tell me when to call back. Under your system, I won't be able to do that. And if an expected visit doesn't show up, I won't be able to call to find out why.

People in the free world have lives to lead, are busy, and only accept calls when it's convenient for them. They are not going to suddenly start making their lives revolve around the possibility that I may call them. Your new policy will result in restricting everyone from making phone calls. It won't be equal access, it will equal DENIAL OF ACCESS.

Thirdly, assigning one phone to each tier will result in congestion of some phones and non-usage for others based solely on whether the tier happens to have frequent phone users on it. Do you know why banks have one waiting line for multiple tellers? So that as many patrons as possible get served as quickly as possible. It is simply common sense.

Also, it takes three-five minutes to place a call. You failed to take that into account when you set up the 20 minute time slots.

Finally, DAI Administrator Fessahaye negotiated a new phone contract with lower rates and our own accounts to give prisoners MORE access, not LESS.

The point is to permit prisoners to maintain close ties with the free world to minimize the damage caused by prison isolation. Your decision to respond to the new increased phone access by essentially eliminating access via a Byzantine phone sign-up system is nothing more than mass punishment. You are having phone access problems in some wings, so you are going to teach us all a lesson by taking away everybody's phone access. Maybe you should punish the guys who fight over phones rather than take phone access from everybody?

You mentioned installing two more phones in each wing. Why don't you install four more phones and forget the sign-up restrictions?

You also run regular fundraisers here but always give the money to the vets (who already have more money than they know what to do with). Maybe you should start having fundraisers that benefit everybody rather than a select few. I believe the only reason the vets get preferential treatment is because the warden is in the National Guard. Use that money to install as many phones as it takes to permit unimpeded access for everybody. I would also like to point out that you have monthly pizza sales but give all the proceeds to organizations outside the prison.

Perhaps it is time to start using money you get from prisoners for the benefit of prisoners. Creating unnecessary scarcity just because you can is no way to run a prison.

I have been in prison for 35 years. The last time I experienced phone restrictions as severe as the ones you recently implemented was in Waupun in the 1980s—before phone lines were installed in the cell halls. With 21st century technology, all prisoners should be able to enjoy unimpeded access to phones.

I urge you to rescind your phone policy and resolve the issue by installing more phones."

Hope you've been well--settling in for another winter at Stanley.

Sending a note complimenting you on your phone service blog. I printed it out and will send to both Warden Reed Richardson and Kevin Carr....if that's ok with you? You spelled out the facts...and I want to reiterate that you're right and we're all being punished with the new system.

I'm working on projects by taking baby steps. I'm meeting with a retired judge in St. Croix County and we're working on a flyer that can be given to individuals and his or her family when they're faced with first time incarceration. Once experiencing the system, you learn what to do and not do...and how to do things. When John was taken from the courtroom by the bailiff....I was in shock, totally traumatized and didn't know anything about the system. I'd been in courtrooms many times--I started my working career as a newspaper reporter and had good relationships with all levels of law enforcement and the judicial system. But being on the receiving end of incarceration...I was totally lost.

In looking at surrounding counties and talking to staff--it doesn't appear that any jail has the product we're proposing. Talking to county jail personnel and looking at programs for county incarceration--it appears from the outside that Dunn and Eau Claire Counties have the most programs trying to benefit and help inmates. Knowing that what's on the annual report and knowing what actually happens at Stanley can be 2 different things--I'll be wary of claims until I see them in action.

Keep up the good work....I enjoy your wordsmithing and insight.