The Truth About Incarceration 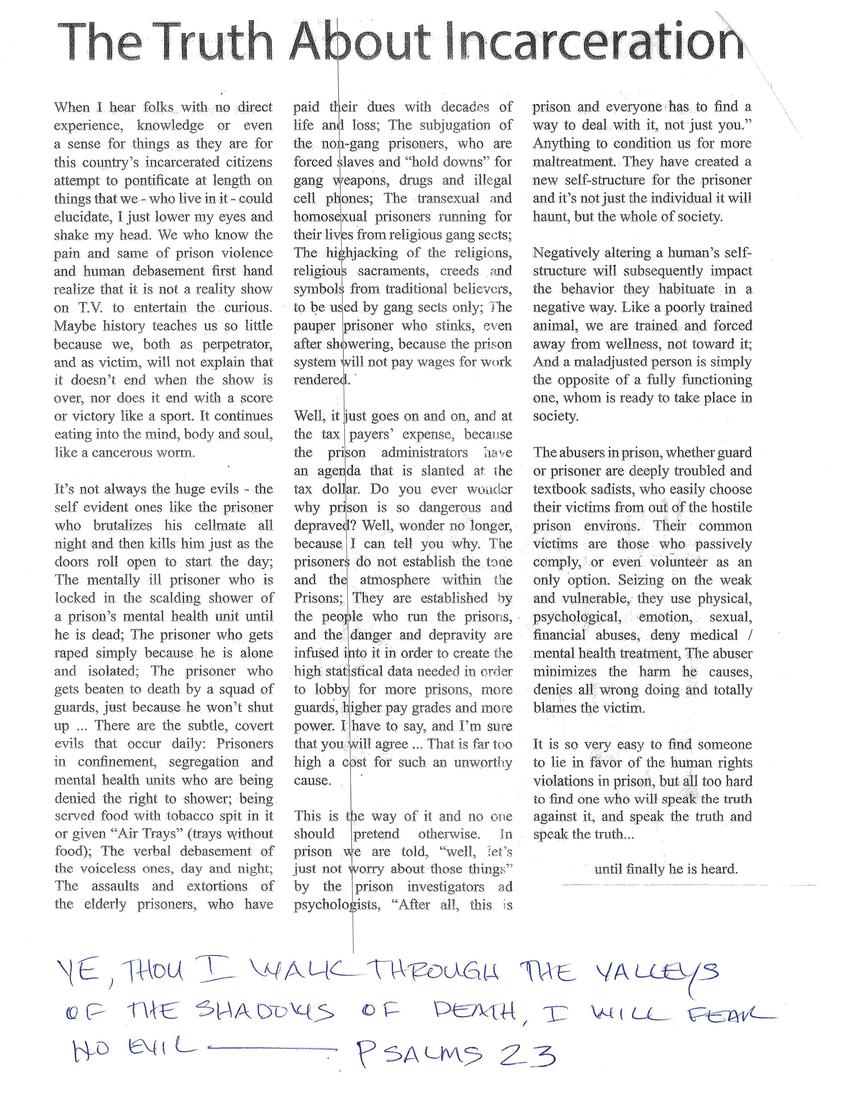 The Truth About Incarceration

When I hear folks with no direct experience, knowledge or even a sense for things as they are for this country's incarcerated citizens attempt to pontificate at length on things that we—who live in it—could elucidate, I just lower my eyes and shake my head. We who know the pain and same of prison violence and human debasement firsthand realize that it is not a reality show on TV to entertain the curious. Maybe history teaches us so little because we, both as perpetrator and as victim, will not explain that it doesn't end when the show is over, nor does it end with a score or victory like a sport. It continues eating into the mind, body, and soul like a cancerous worm.

There are the subtle, covert evils that occur daily. Prisoners in confinement, segregation, and mental health units who are being served food with tobacco spit in it or given Air Trays (trays without food). The verbal debasement of the voiceless ones, day and night. The assaults and extortion of the elderly prisoners, who have paid their dues with decades of life and loss. The subjugation of the non-gang prisoners, who are forced slaves and hold downs for gang weapons, drugs, and illegal cellphones. The transexual and homosexual prisoners running for their lives from religious gang sects. The high-jacking of the religions, religious sacraments, creeds and symbols from traditional believers to be used by gang sects only. The pauper prisoner who stinks, even after showering, because the prison system will not pay wages for work rendered.

Well, it just goes on and on—and at the taxpayers' expense—because the prison administrators have an agenda that is slanted at the tax dollar. Do you ever wonder why prison is so dangerous and depraved? Well, wonder no longer because I can tell you why.

The prisoners do not establish the tone and atmosphere within the prisons. They are established by the people who run the prisons. The danger and depravity are infused into it in order to create the high satisfactory data needed in order to lobby for more prisons, more guards, higher pay grades, and more power. I have to say, and I'm sure you will agree, that is far too high a cost for such an unworthy cause.

This is the way of it, and no one should pretend otherwise. In prison we are told, "Well, let's just not worry about those things" by the prison investigators and psychologists. "After all, this is prison, and everyone has to find a way to deal with it—not just you." Anything to condition us for more maltreatment. They have created a new self-structure for the prisoner, and it's not just the individual it will haunt but the whole of society.

Negatively altering a human's self-structure will subsequently impact the behavior they habituate in a negative way. Like a poorly trained animal, we are trained and forced away from wellness, not toward it. And a maladjusted person is simply the opposite of a fully functioning one whom is ready to take place in society.

The abusers in prison, whether guard or prisoner are deeply troubled and textbook sadists, who easily choose their victims from out of the hostile prison environs. Their common victims are those who passively comply or even volunteer as an only option. Seizing on the weak and vulnerable, they use physical, psychological, emotional, sexual, financial abuses, deny medical and mental health treatment. The abuser minimizes the harm he causes, denies all wrongdoing, and totally blames the victim.

Ye, thou I walk through the valleys of the shadows of death, I will fear. No evil
—Psalms 23