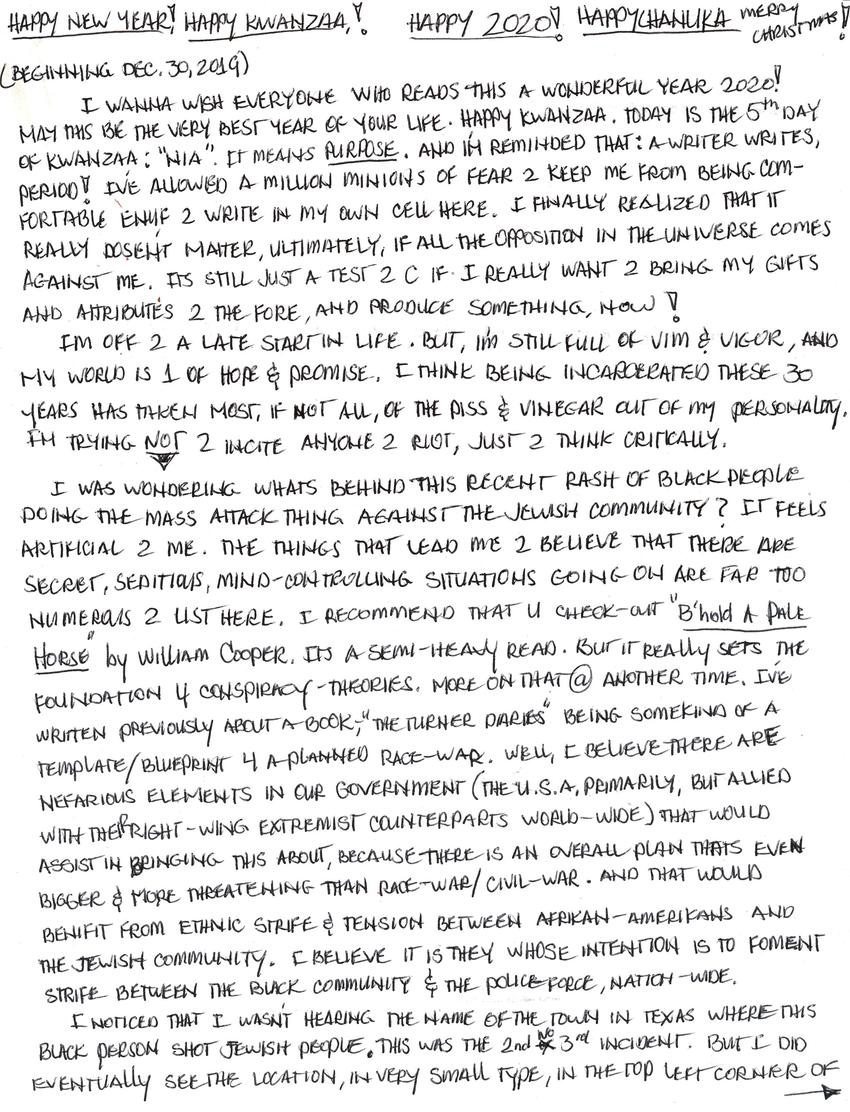 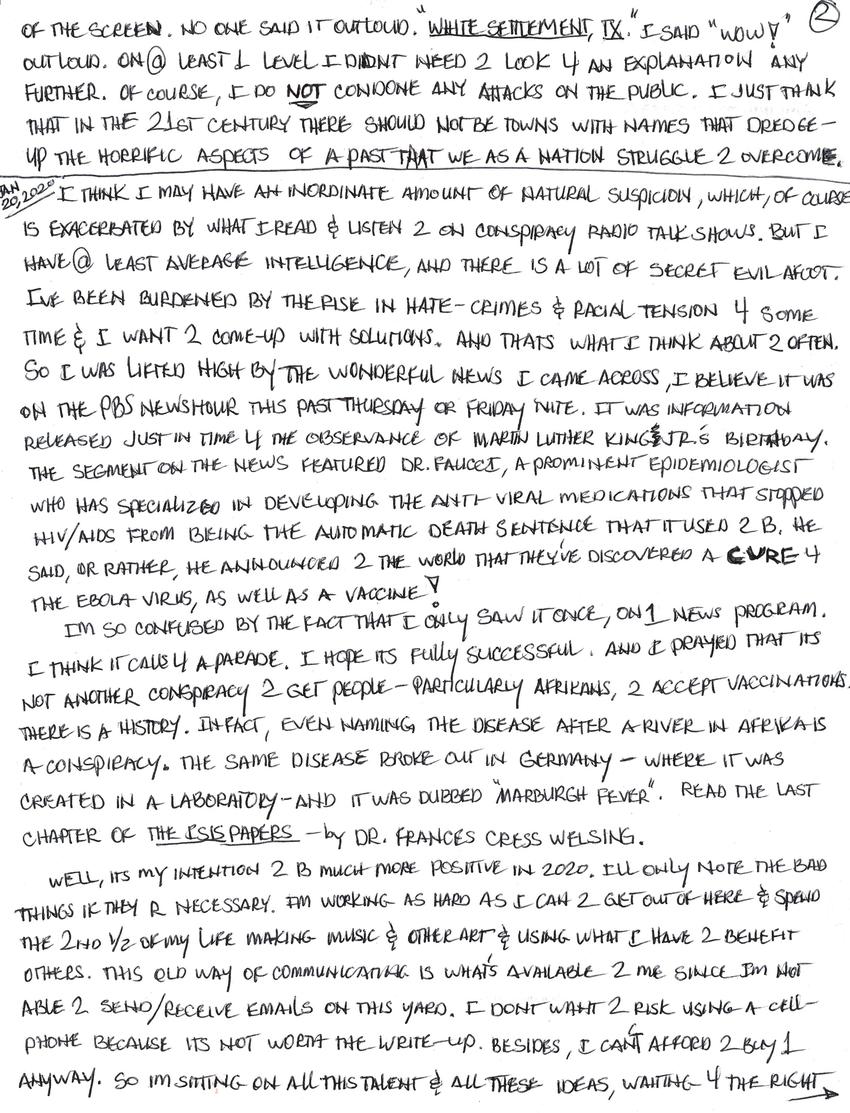 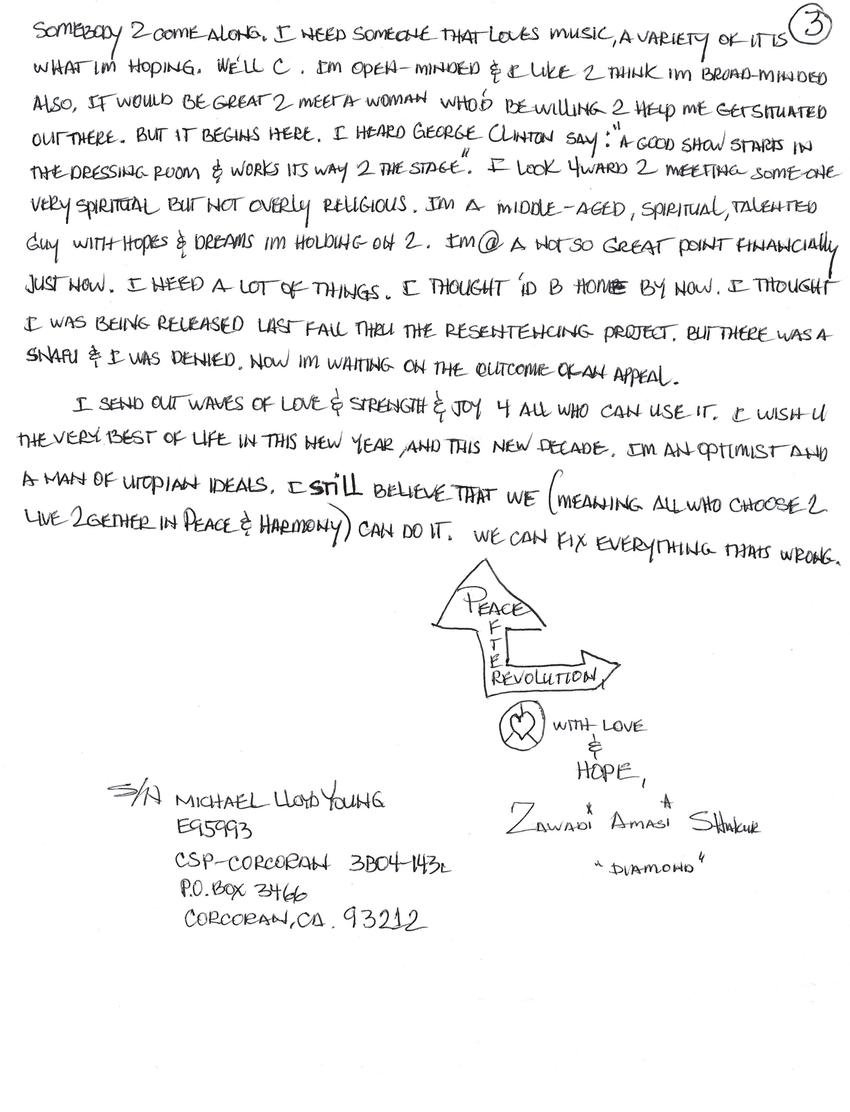 I wanna wish everyone who reads this a wonderful year 2020! May this be the very best year of your life. Happy Kwanza. Today is the 5th day of Kwanza. 'Nia'. It means PURPOSE, and I'm reminded that: a writer writes, period! I've allowed a million minions of fear to keep me from being comfortable enough to write in my own cell here. I finally realised that it really doesn't matter, ultimately, if all the opposition in the universe comes against me. It's still just a test to see if I really want to bring my gifts and attributes to the fore, and produce something, now!

I'm off to a late start in life. But, I'm still full of vim and vigour, and my world is one of hope and promise. I think being incarcerated these 30 years has taken most, if not all, of the piss and vinegar out of my personality. I'm trying NOT to entice anyone to riot, just to think critically.

I was wondering what's behind this recent rash of black people doing the mass attack thing against the Jewish community? It feels artificial to me. The things that lead me to believe that there are secret, seditious, mind-controlling situations going on are far too numerous to list here. I recommend that you check out 'B'hold a Pale Horse' by William Cooper. It's a semi-heavy read. But it really sets the foundation for conspiracy theories. More on that another time. I've written previously about a book, 'The Turner Diaries' being some kind of a template/blueprint for a planned race war. Well, I believe there are nefarious elements in our government (the USA primarily, but allied with the right-wing extremist counterparts world-wide) that would assist in bringing this about, because there is an overall plan that's even bigger and more threatening than race-war/civil-war. And that would benefit from ethnic strife and tension between African-Americans and the Jewish community. I believe it is they whose intention is to foment strife between the black community and the police force, nation-wide.

I noticed that I wasn't hearing the name of the town in Texas where this black person shot Jewish people. This was the 2nd, no 3rd incident. But I did eventually see the location, in very small type, in the top left corner of the screen. No one said it out loud. 'White Settlement, TX'. I said 'Wow!' out loud. On at least one level, I didn't need to look for an explanation any further. Of course, I do NOT condone any attacks on the public. I just think that in the 21st century there should not be towns with names that dredge up the horrific aspects of a past that we as a nation struggle to overcome.

January 20, 2020
I think I may have an inordinate amount of natural suspicion, which, of course is exacerbated by what I read and listen to on conspiracy radio talk shows. But I have at least average intelligence, and there is a lot of secret evil afoot. I've been burdened by the risk in hate-crimes and racial tension for some time and I was to come up with solutions. And that's what I think about too often. So I was lifted high by the wonderful news I came across, I believe it was on the PBS news hour this past Thursday or Friday night. It was information released just in time for the observance of Martin Luther King Jr's birthday. The segment on the news features Dr Faucet, a prominent epidemiologist who has specialised in developing the anti-viral medications that stopped HIV/AIDS from being the automatic death sentence that it used to be. He said, or rather, he announced to the world that they've discovered a CURE for the Ebola virus, as well as a vaccine!

I'm so confused by the fact that I only saw it once, on one news program. I think it calls for a parade. I hope its fully successful, and I prayed that it's not another conspiracy to get people, particularly Africans, to accept vaccinations. There is a history. In fact, even naming the disease after a river in Africa is a conspiracy. The same disease broke out in Germany - where it was created in a laboratory - and it was dubbed 'Marburg Fever'. Read the last chapter of the ISIS papers - by Dr Frances Cress Welsing.

Well, it's my intention to be much more positive in 2020. I'll only note the bad things if they are necessary. I'm working as hard as I can to get out of here and spend the 2nd half of my life making music and other art and using what I have to benefit others. This old way of communicating is what's available to me since I'm not able to send/receive emails on this yard. I don't want to risk using a cell-phone because it's not worth the write-up. Besides, I can't afford to buy one anyway. So I'm sitting on all this talent and all these ideas, waiting for the right somebody to come along. I need someone that loves music, a variety of it is what I'm hoping. We'll see. I'm open-minded and I like to think I'm broad-minded also, it would be great to meet a women who'd be wiling to help me get situated out there. But it begins here. I heard George Clinton say: 'A good show starts in the dressing room and works its way to the stage'. I look forward to meeting someone very spiritual but not overly religious. I'm a middle-aged, spiritual, talented guy with hopes and dreams I'm holding on to. I'm at a not so great point financially just now. I need a lot of things. I thought I'd be home by now. I thought I was being released last fall through the resentencing project. But there was a snafu and I was denied. Now I'm waiting on the outcome of an appeal.

I send out waves of love and strength and joy for all who can use it. I wish you the very best of life in this new year, and this new decade. I'm an optimist and a man of utopian ideas. I still believe that we (meaning all who choose to live together in peace and harmony) can do it. We can fix everything that's wrong.