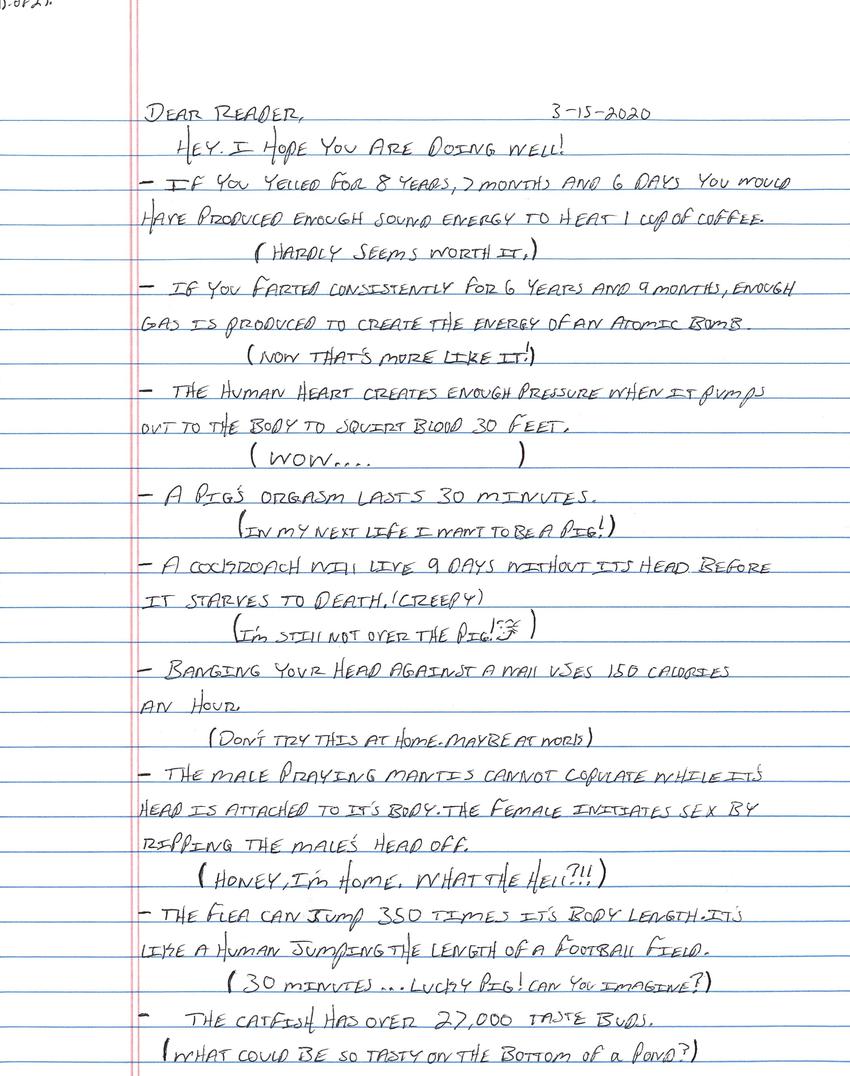 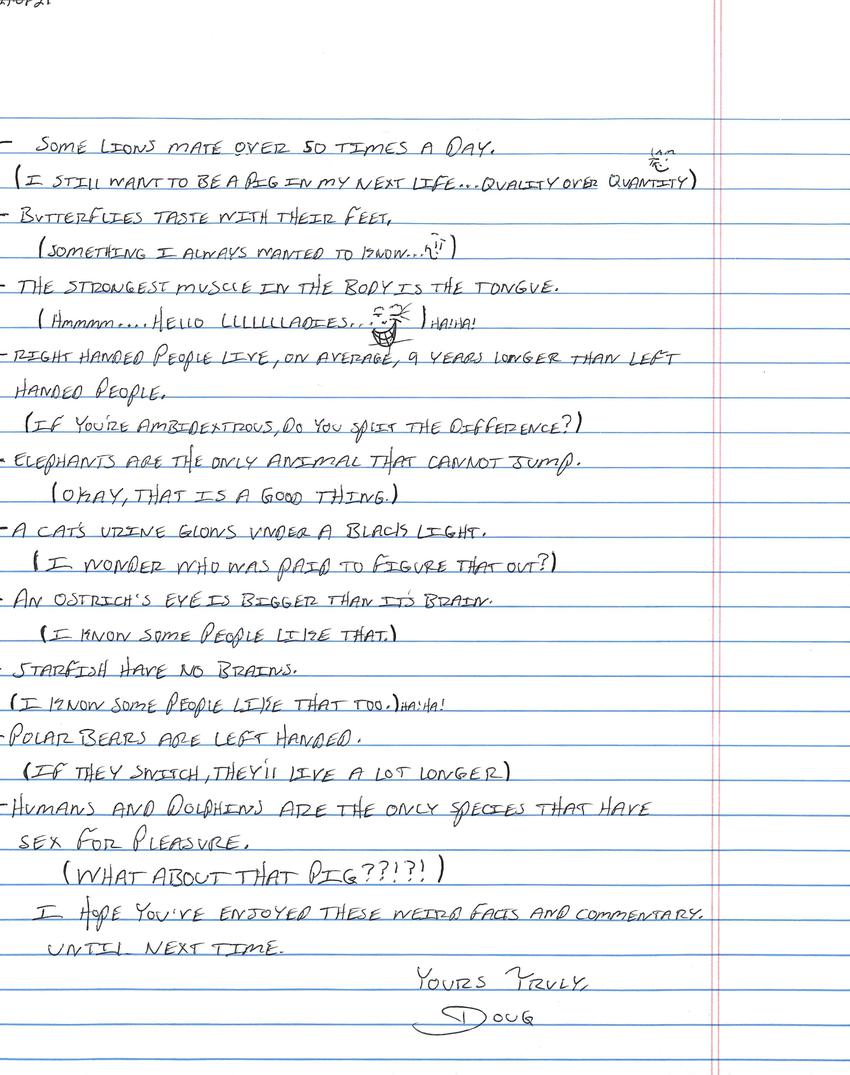 Hey. I hope you are doing well!

-If you yelled for 8 years, 7 months and 6 days you would have produced enough sound energy to heat 1 cup of coffee.
(Hardly seems worth it)

-If you farted consistently for 6 years and 9 months, enough gas is produced to create the energy of an atomic bomb.
(Now that's more like it!)

- The human heart creates enough pressure when it pumps out to the body to squirt blood 30 feet.
(Wow...)

- A cockroach will live 9 days without its head before it starves to death! Creepy!
(I'm still not over the pig ;))

- Banging your head against a wall uses 150 calories an hour.
(Don't try this at home. Maybe at work)

- The male praying mantis cannot copulate while it's head is attached to it's body. The female initiates sex by ripping the male's head off.
(Honey, I'm home. What the hell?!!)

-The flea can jump 350 times it's body length. It's like a human jumping the length of a football field.
(30 minutes... Lucking pig! Can you imagine?)

- Butterflies taste with their feet.
(Something I always wanted to know...)

- Right handed people live, on average, 9 years longer that left handed people.
(If you're ambidextrous, do you split the difference?)

-Elephants are the only animal that cannot jump.
(Okay, this it a good things.)

-A cat's urine glows under a black light.
(I wonder who was paid to figure that out?)

-An ostrich's eye is bigger than it's brain.
(I know some people like that)

- Starfish have not brains.
(I know some people like that too) Ha!ha!

-Humans and dolphins are the only species that have sex for pleasure.
(What about that pig??!?!)

I hope you've enjoyed there weird facts and commentary. Until next time.

Hello Douglas.
Remember a pig usually ends up as a pork roast, bacon or sausages. Is thirty minutes a few times a day worth it?
Oh wow, I’m conflicted now!
I watched the awful footage posted animal rights people about chickens for the meat industry. A domestic farm living chicken has a life span of 15 years. A factory farmed chicken created for the fast food industry is killed when it is 49 days old. That’s 49 DAYS old. But, I love KFC and still eat it and I’m Buddhist, I don’t eat red meat or fish. My grand father was a Royal Navy man his whole life and always refused to eat anything that came out of the sea, He had seen too many bodies eaten by ocean life, and likened it to cannibalism. My Irish-grandmother refused to eat pork products, due to a rather grisly murder in the early 1970s where a woman was disposed of in a local pig farm.
Pigs and chicken are yummy, regardless of their private lives and relationships.
I do fart a lot. Have always enjoyed a good flatulence session. With age comes the wind, Might as well be some pay off to advancing age.
Did you get my snail mail yet?
All the best
T
(scanned reply – view as blog post)
uploaded April 26, 2020.  Original (PDF) 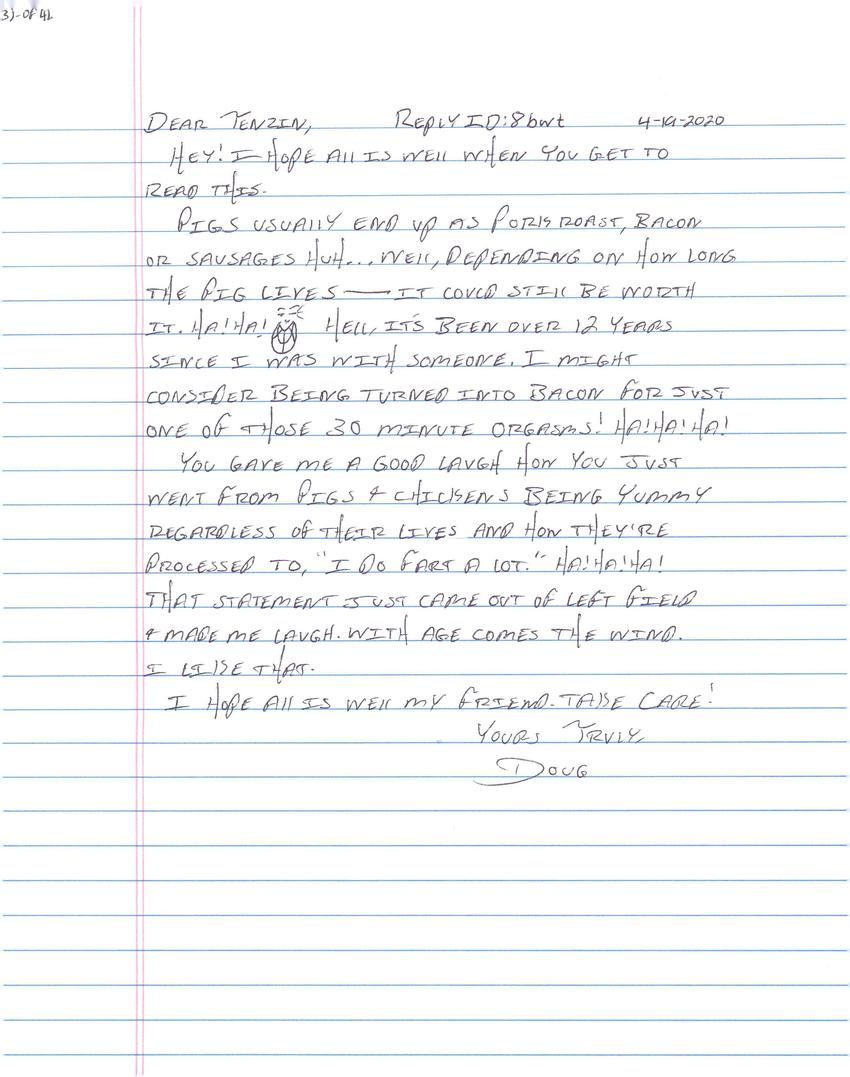