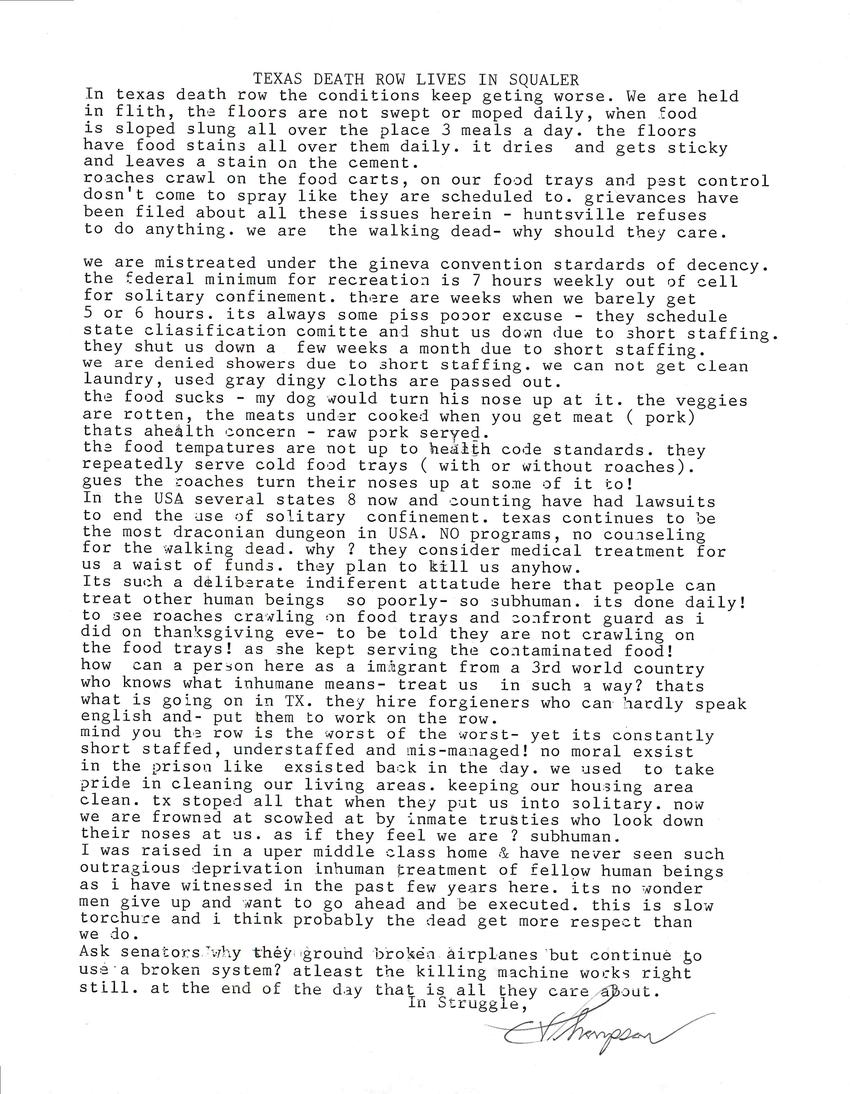 In texas death row the conditions keep geting worse. We are held in flith, the floors are not swept or moped daily, when food is sloped slung all over the place 3 meals a day. the floors have food stains all over them daily. it dries and gets sticky and leaves a stain on the cement.
roaches crawl on the food carts, on our food trays and pest control dosn't come to spray like they are scheduled to. grievances have been filed about all these issues herein - huntsville refuses to do anything. we are the walking dead- why should they care.

we are mistreated under the gineva convention standards of decency. the federal minimum for recreation is 7 hours weekly out of cell for solitary confinement. there are weeks when we barely get 5 or 6 hours. its always some piss poor excuse - they schedule state cliasification comitte and shut us down due to short staffing. we are denied showers due to short staffing. we can not get clean laundry, used gray dingy cloths are passed out. the food sucks - my dog would turn his nose up at it. the veggies are rotten. the meats under cooked when you get meat ( pork) thats ahealth concern - raw pork served. the food tempatures are not up to health code standards. they repeatedly serve cold food trays ( with or without roaches). gues the roaches turn their noses up at some of it to! In the USA several states 8 now and counting have had lawsuits to end the use of solitary confinement. texas continues to be the most draconian dungeon in the USA. NO programs, no counseling for the walking dead. why ? they consider medical treatment for us a waist of funds. they plan to kill us anyhow. Its such a deliberate indiferent attatude here that people can treat other human beings so poorly- so subhuman. its done daily! to see roaches crawling on food trays and confront guard as i did on thanksgiving eve- to be told they are not crawling on the food trays! as she kept serving the contaminated food! how can a person here as a imigrant from a 3rd world country who knows what inhuman means- treat us in such a way? thats what is goign on in TX. they hire forgieners who can hardly speak english and- put them to work on the row. mind you the row is the worst of the worst- yet its constantly short staffed, understaffed and mis-managed! no moral exsist in the prison like exsisted back in the day. we used to take pride in cleaning our living areas. keeping our housing area clean. tx stoped all that when they put us into solitary. now we are frowned at scowled at by inmate trusties who look down their noses at us. as if they feel we are ? subhuman. I was raised in a uper middle class home & have never seen such outragious deprivation inhuman treatment of fellow human beings as i have witnessed in the past few years here. its no wonder men give up and want to go ahead and be executed. this is slow torchure and i think probably the dead get more respect than we do. Ask senators why they ground broken airplanes but continue to use a broken system? atleast the killing machine works right still. at the end of the day that is all they care about.
In struggle,
C Thompson

I transcribed your letter and am very sorry to hear about how inhumanely you are treated in solitary in TX. No one deserves to live amongst such disgusting unhygienic conditions, and there should certainly be no excuse whatsoever for you to not get your weekly allotted time outside of your cell.

I am sure you are well aware of the state of the world outside the prison system currently. COVID-19 is running rampant and politicians are mucking things up with that as well. I live in a fairly safe part of the country, but am in a state in which the numbers of the infected are rising rapidly. It is only a matter of time before the novel coronavirus hits my part of the world. I hope it is staying outside the walls of your prison.

Thank you again for writing. I have only begun transcribing for Between The Bars, but plan to take time out of my schedule to frequently transcribe posts in an attempt to make your voice more heard amongst activists and politicians. I know it is not much, but I hope that my efforts can help you in some way. 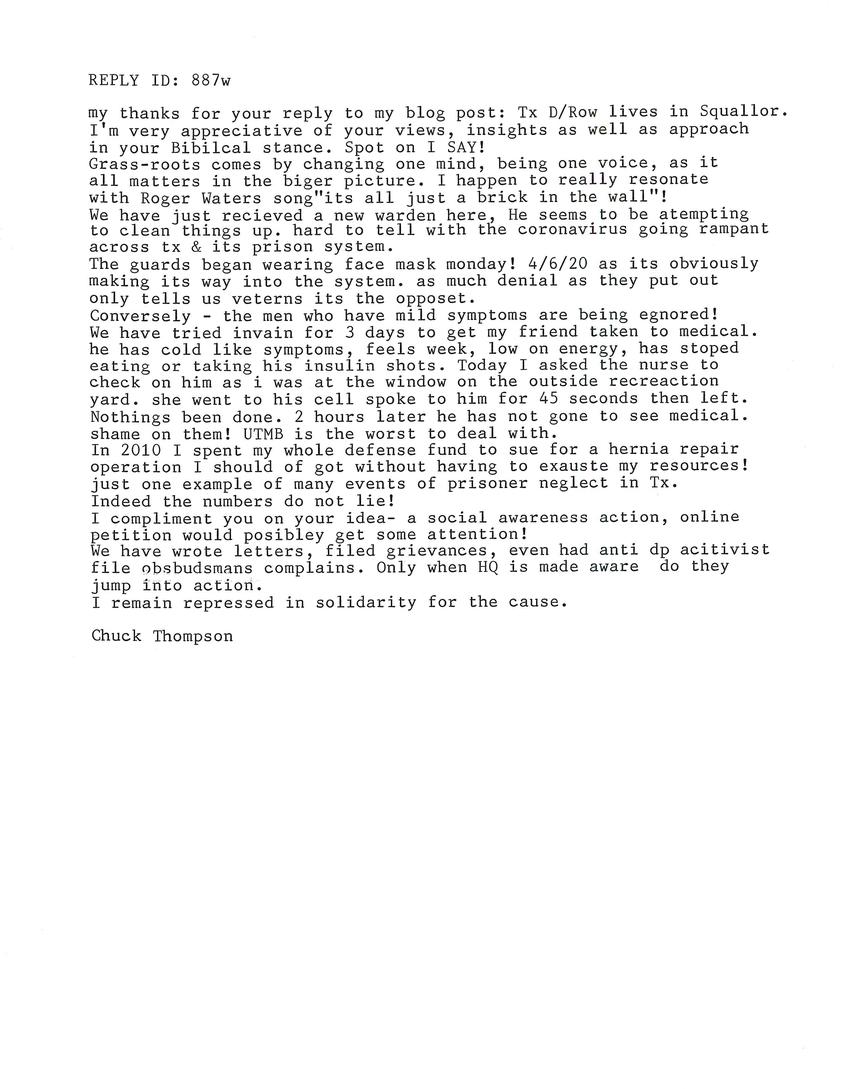