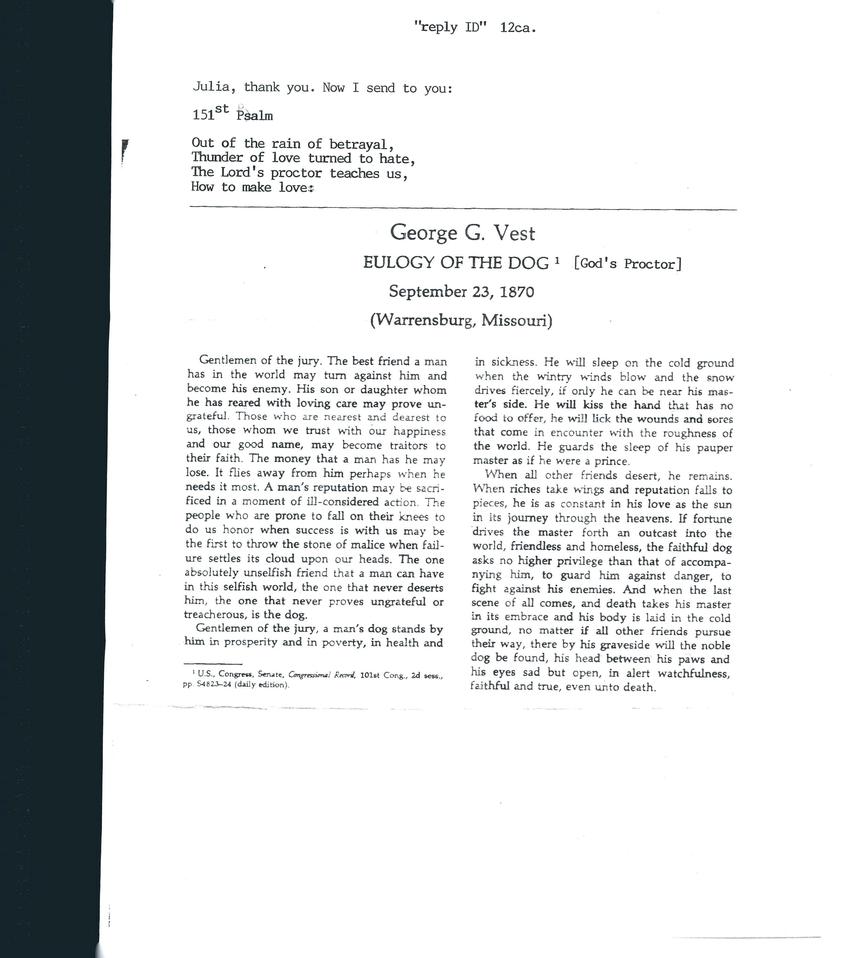 Out of the rain of betrayal,
Thunder of love turned to hate,
The Lord's proctor teaches us,
How to make love:

Gentlemen of the jury. The best friend a man has in the world may turn against him and become his enemy. His son or daughter whom he has reared with loving care may prove ungrateful. Those who are nearest and dearest to us, those whom we trust with our happiness and our good name, may become traitors to their faith. The money that a man has he may lose. It flies away from him perhaps when he needs it most. A man's reputation may be sacrificed in a moment of ill-considered action. The people who are prone to fall on their knees to do us honor when success is with us may be the first to throw the stone of malice when failure settles its cloud upon our heads. The one absolutely unselfish friend that a man can have in this selfish world, the one that never deserts him, the one that never proves ungrateful or treacherous, is the dog.

Gentlemen of the jury, a man's dog stands by him in prosperity and in poverty, in health and in sickness. He will sleep on the cold ground when the wintry winds blow and the snow drives fiercely, if only he can be near his master's side. He will kiss the hand that has no food to offer, he will lick the wounds and sores that come in encounter with the roughness of the world. He guards the sleep of his pauper master as if her were a prince.

When all other friends desert, he remains. When riches take wings and reputation falls to pieces, he is as constant in his love as the sun in its journey through the heavens. If fortune drives the master forth an outcast into the world, friendless and homeless, the faithful dog asks no higher privilege than that of accompanying him, to guard him against danger to fight against his enemies. And when the last scene of all comes, and death takes his master in its embrace and his body is laid in the cold ground, no matter if all other friends pursue their way, there by his graveside will the noble dog be found, his head between his paws and his eyes sad but open, in alert watchfulness, faithful and true, even unto death.

Dear Robert,
good to hear from you, also got your snail mail.
I wonder, did Jacques Brel write Pslam 152? In any case, this song comes to mind:

It’s too much trouble

It’s beautiful as long as it lasts

And it’s much better

And it stays there

They tell us nothing

That’s perhaps for that

That we think we love them

They grab you from the nose

They take you for a tea

They grab you from the neck

They nail shut you

It depends on you

They grab you from the heart

With flowers they ought to be hanged

It depends on the hours

It depends on everything

It depends on money

It depends on nothing

And it stays there

They tell us nothing

We think we love them
Les filles

They play with the brain

They pretend to be made of tinder

Their game is rather cheeky

You are their fair game

They play the game of playing

They play the game of love

They play to win

Whether they pretend to be young ladies

Or pretend to be great ladies

They play no game

Because they don’t know

They play no game

We think we love them

Cause you to think

They offer you a leave

They are given for a time

It’s a give and take matter

Everyone gets a turn

They lead you to court…(-ship!)

Give you their body

They give it so strong

That you end up filled with remorse

They give you nothing

Because they don’t know

How to pretend that they are giving

We ought to love them

And yet it is for the sake of girls

That at any morning

At the smallest grief

We disavow our dogs…
Not sure you agree with the ending ;) The song is from 1962 and Brel, while one of the big names of French Chanson, for many the biggest, actually from Belgium... Warm greetings, Julia
Dear Robert,
just a hello from me and thank you for the letters, I hope all is well with you! I hope to reply soon and I am doing fine, just following too much your advice on spring wine, lol!
Greetings, Julia