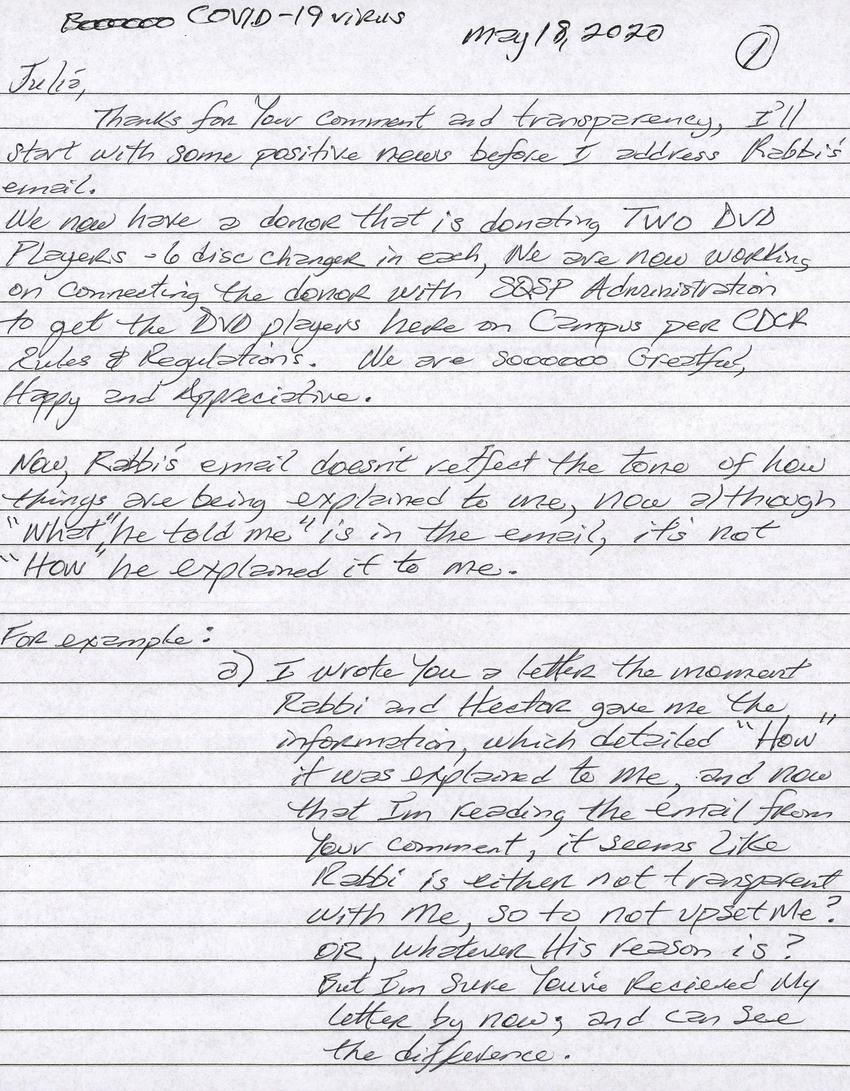 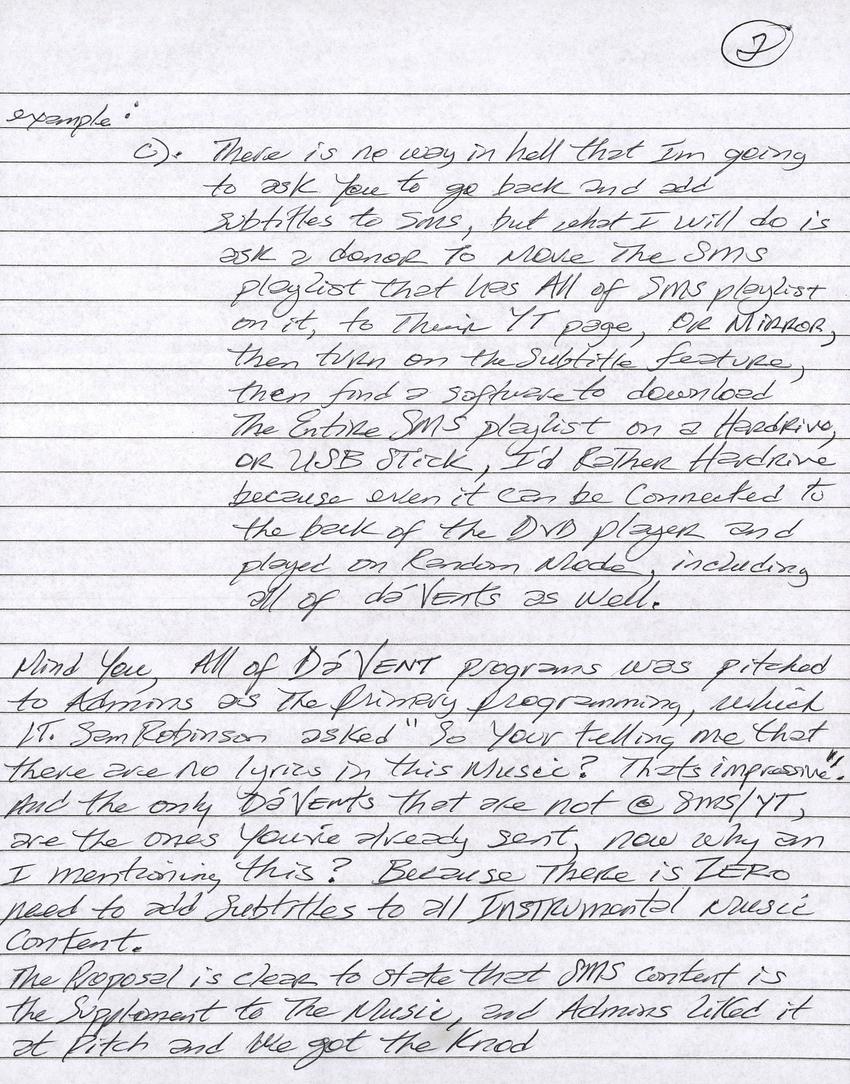 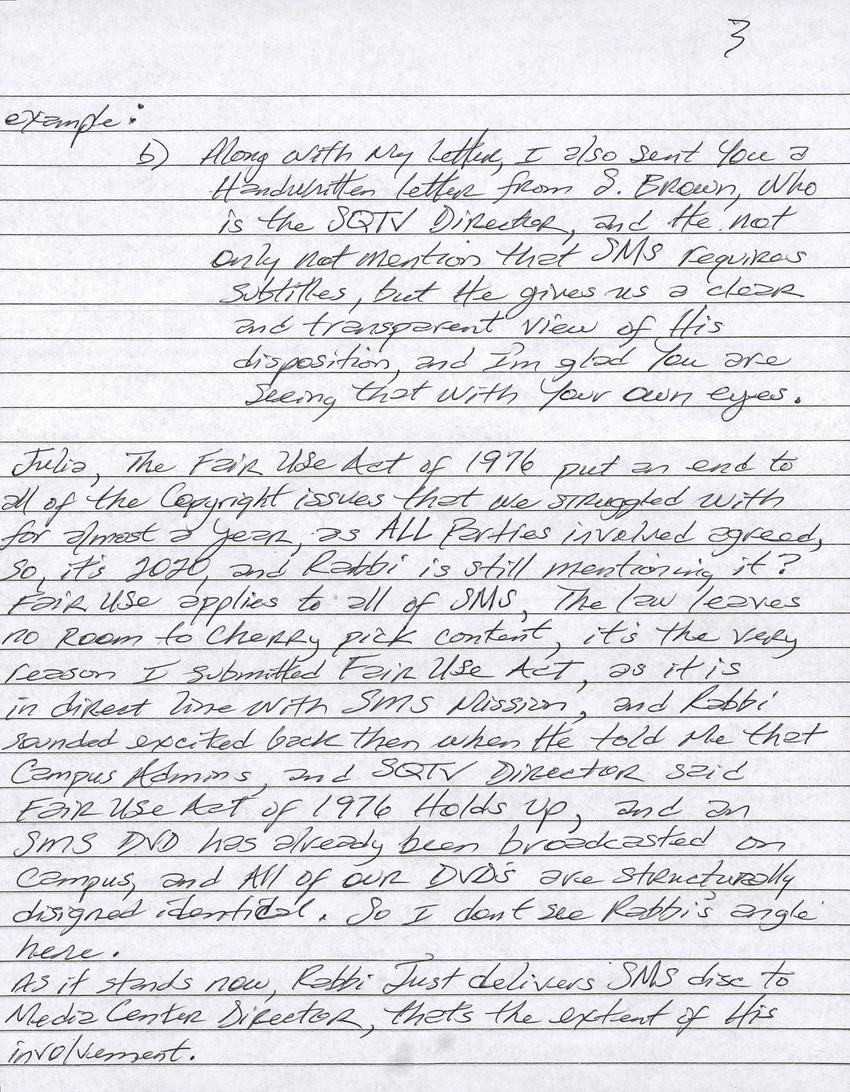 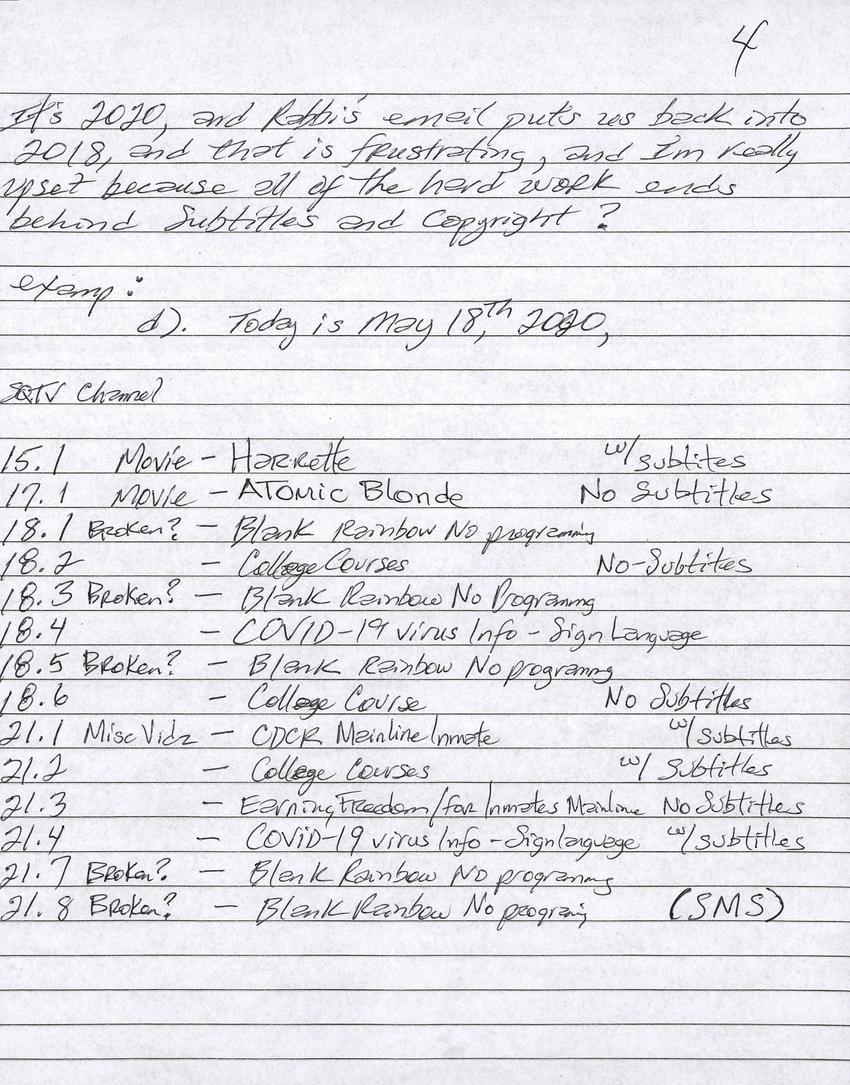 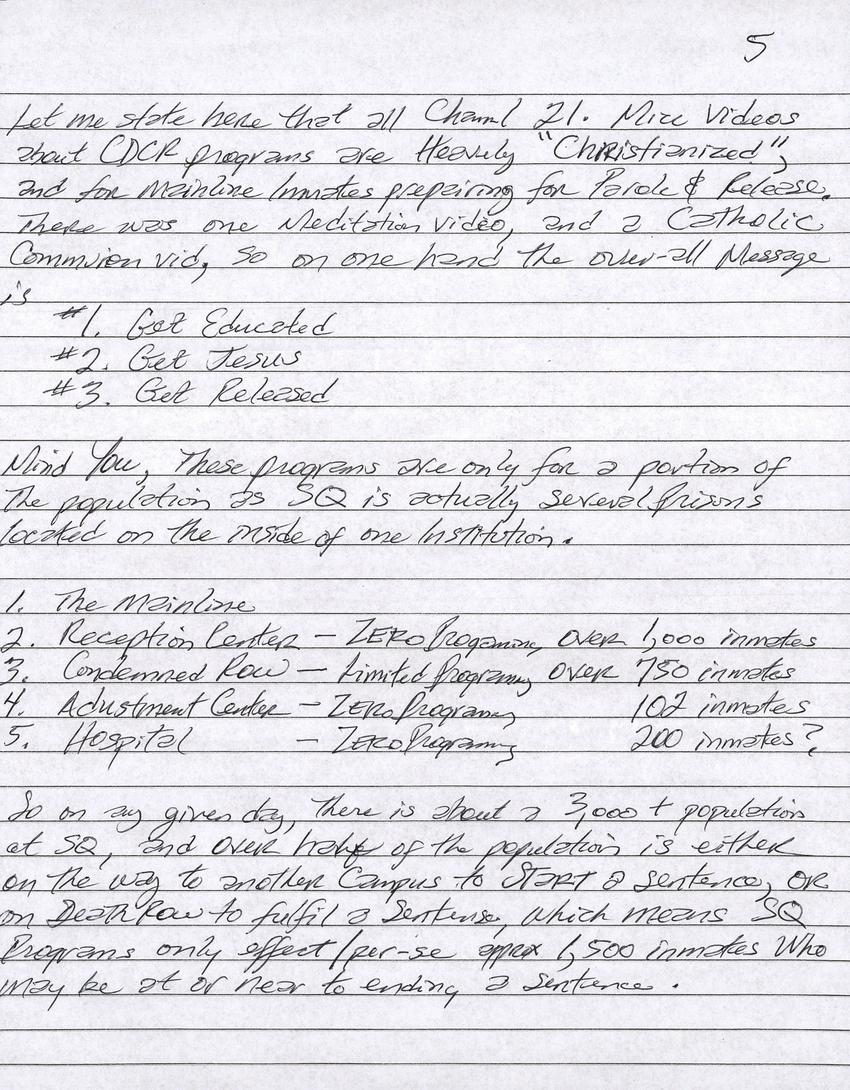 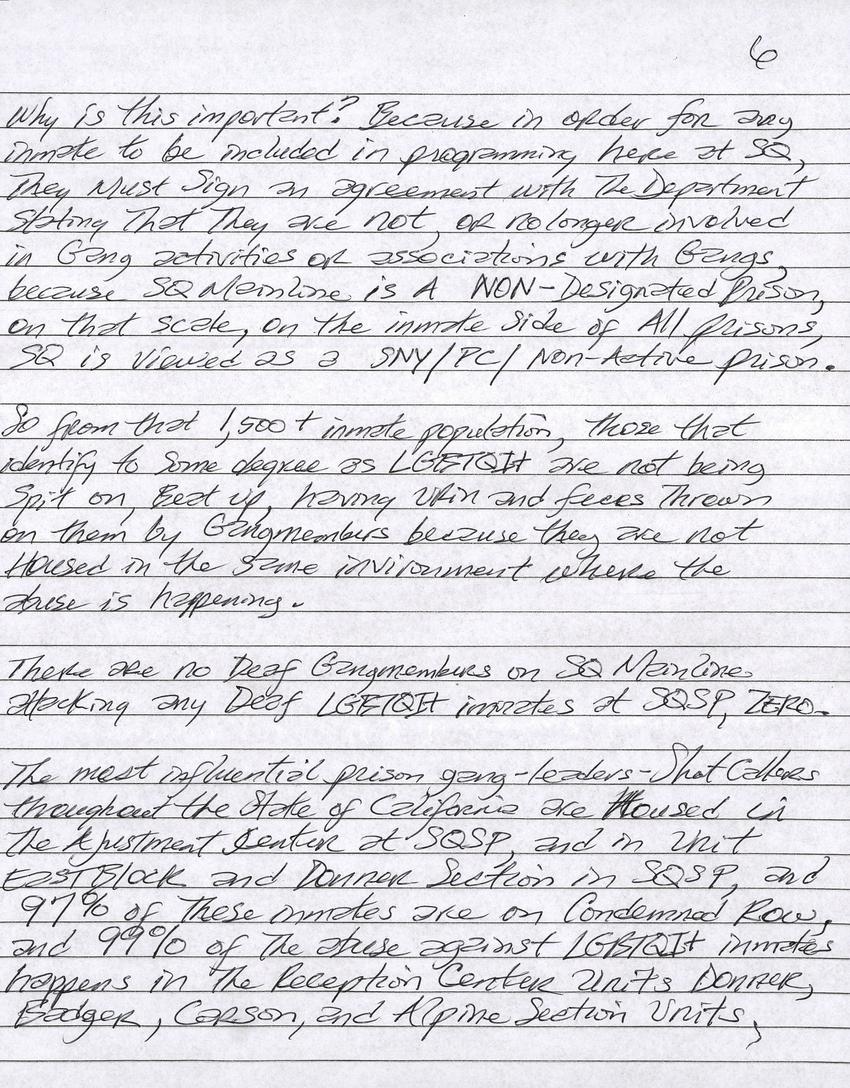 COVID-19 virus May 18, 2020
Julia,
Thanks for your comment and transparency, I'll start with some positive news before I address Rabbis' email.
We now have a donor that is donating Two DVD players- 6 disc changer in each, We are now working on connecting the donor with SQSP Administration to get the DVD players here on Campus as per CDCR Rules & Regulations. We are soooooo grateful, happy and appreciative.

Now, Rabbi's email doesn't reflect the tone of how things are being explained to me, now although "What" he told me "is in the email, it's not "How" he explained it to me.

For example:
a) I wrote you a letter the moment Rabbi and Heather gave me the information, which detailed "How" it was explained to me, and now that I'm reading the email from your comment, it seems like
Rabbi is either not transparent with me, so to not upset me? OR, Whatever His reason is? But I'm sure You've received my letter by now, and can see the difference.

example:
c). There is no way in hell that I'm going to ask you to go back and add subtitles to SMS, but what I will do is ask a donor to move The SMS playlist that has All of SMS playlist on it, to Their
YT page, Or MIRROR, then turn on the subtitle feature, then find a software to download the Entire SMS playlist on a hard drive or USB stick, I'd rather hard drive because even it can be
connected to the back of the DVD player and played on Random Mode, including all of da Vents as well.

Mind You, All of DaVENT programs was pitched to Admins as the primary programming, which FT. Same Robinson asked "So your telling me that there are no lyrics in this music? That's impressive." And the only DaVents that are not @ SMS/YT, are the ones you've already sent, now why am I mentioning this? Because there is ZERO NEED TO ADD SUBTITLES TO ALL INSTRUMENTAL music content.
The Proposal is clear to state that SMS content is the Supplement to The Music, and Admins liked it at pitch and we got the nod.

example:
b) Along with my letter, I also sent you a handwritten letter from S. Brown, who is the SQTV Director, and he not only not mention that SMS requires subtitles, but He gives us a clear and
transparent view of his disposition, and I'm glad you are seeing that with your own eyes.

Julia, The Fair Use Act of 1976 put an end to all of the Copyright issues that we struggled with for almost a year, as ALL Parties involved agreed, so, it's 2020, and Rabbi is still mentioning it? fair use applies to all of SMS, The law leaves no room to cherry pick content, it's the very reason I submitted Fair Use Act, as it is in direct line with SMS mission, and Rabbi sounded excited back then when he told me that Campus Admins, and SQTV Director said Fair Use Act of 1976 holds up, and an SMS DVD has already been broadcasted on Campus, and All of our DVD's are structurally designed identical. So I don't see Rabbi's angle here.
As it stands now, Rabbi Just delivers the SMS disc to Media Center Director, that's the extent of his involvement.

It's 2020, and Rabbi's email puts us back into 2018, and that is frustrating, and I'm really upset because all of the hard work ends behind Subtitles and Copyright?

Let me state here that all Channel 21. Misc Videos about CDCR PROGRAMS ARE heavily "Christianized", and for mainline Inmates preparing for Parole & Release. There was one Meditation video, and a Catholic Communion vid, so on one hand the overall message is
#1. Get Educated
#2. Get Jesus
#3. Get released

Mind you, these programs are only for a portion of the population as SQ is actually several prisons located on the inside of one Institution.

So on any given day, There is about a 3000 + population at SQ, and over half of the population is either on the way to another Campus to START a sentence, OR on DeathRow to fulfil a sentence, which means SQ Programs only effect/ per-se approx 1,500 inmates who may be at or near ending a sentence. Why is this important? Because in order for any inmate to be included in programming here at SQ, they must sign an agreement with The Department stating that they are not, or no longer involved in gang activities or associations with gangs because SQ Mainline is a NON- designated prison, on that scale, on the inmate side of all, prisons, SQ is viewed as SNY/PC/ Non-Active prison.

So from that 1.5000 + inmate population, those that identify to some degree as LGBTQI+ are not being spit on, beat up, having urine and feces thrown on them by gang members because they are not housed in the same environment where the abuse is happening.

There are no Deaf Gangmembers on SQ Mainline attacking any Deaf LGBTQI+ inmates at SQSP, Zero.

The most influential prison gang-leaders-Shot Callers throughout the State of California are Housed in the Adjustment Center at SQSP, and in unit East Block and Donner Section in SQSP, and 97% of These inmates are on Condemned Row, and 99% of The abuse against LGBTQI+ inmates happens in The Reception Center units Donner, Badger, Carson, and Alpine Section Units, where no inmate has agreed with The Department to not be active gang members.

SMS presents a unique presence at SQSP, SMS is available to everyone who has access to a Television, including The Shot callers that have given the green light order "cross-race" to abuse, attack and get rid of all inmates that identify as LGBTQI+ from all level 4 and now some level 3 Institutions, primarily with an intent to force the Governor and The Department to end the None-Designated, 50/50 merging of Prison Programming statewide.

SMS program is not proposed to help 15 inmates sitting in a classroom full of other inmates that have already agreed with the Department through a signed declaration to not be violent with other inmates, because that method is a primitive "Preaching to the choir" non effective programming and that looks productive on the surface, yet it prevents ZERO abuse of LGBTQI+ Inmates to stop.

These primitive models totally exclude the large "(?) Closet" population that are not cared for to the degree SMS is designed for because they have personal Televisions as well. SMS presents the fact that all inmates and prison culture sets the valued standard at Respect, and Disrespect, and ALL Prison Gang and Street Gang Culture direct, and teach direct Ethnographic and Racial Historical Connectivity to conduct constitutions that are Mandatory to prison social experience.

SMS specified takes the labels of LGBTQI+ which is widely rejected by prison culture, and directly connects the liberation of facts that are directly associated with what Prisoners of Respect, across the yard.

There is No other program at SQ That provides this degree of engagement to the direct causes and reasoning to tip prison culture on its head to end the violent instructions of our most undeserved and ignorant demographic of the population.

Everybody is not a Christian, or in school, and near to an end of a sentence, and some gang members will soon take into account that the younger generation of Torpedos also have Televisions, as do victims of abuse, and this has never been done before.

In prison culture, it is disrespectful to disrespect your own race, and even make dangerous to disrespect the values of another race, SMS programs are designed specifically to expose the value of LGBTQI+ presence in each Race, and Subculture.

For whatever reason, Nobody is willing to simply give the order for the designation of on Channel to simply play the SMS DVDs as they are without trying to sanitize the reality that not providing solution based programming is in fact, neglect.

Right now, we need This Warden to take a big step and commision Plant operations to install Plexiglass clear covering atop each Holding Cage on the 1st Floor of Donner Section, Badger Section and Alpine Section as fast as possible to protect LGBTQI+ inmates from being doused with water, urine, feces, and spit, and Lord knows whatever is in those used condoms, booooooooo COVID-19 Virus.
1. Play DVDs
2.Cover Cages
Simple, seriously, it's that simple.
-f. Smith

Good to read from you, Xzyzst!
Writing you late at night on Sunday, and in order for this to go out this week I will keep it short and let you know that I am working on nr18 military and nr22bullying, that is the next two I will send. I am afraid I do not have that earth video anymore, but I can recreate, actually found a german video that is 45 minutes fly over california, might use that one. Let me know if that is a good idea, and if I should check if they fly over sq and if that would be a nono. do have some of those ink videos, they are downright spiritual too ;) and that one of flowers blosseming with oddisee, i liked them too.
Big hug, history in the making Ju
ps. five rainbow channels? what do they expect of us? LOL
Oh and awesome someone donated that dvd player, and genius to have rolling title in one all the time. Damn!
and also, I did not receive a handwritten letter by s. brown yet. hugzzzzzz
Dear Xzyzst,
its is sunday june 7 and military and bullying are on their way. Big hug! Ju
Dear Xzyzst,
it's monday morning June, 15 and Health and vent 9.0 are going to be on their way today. Big hug, Ju