The Mask Of Anarchism 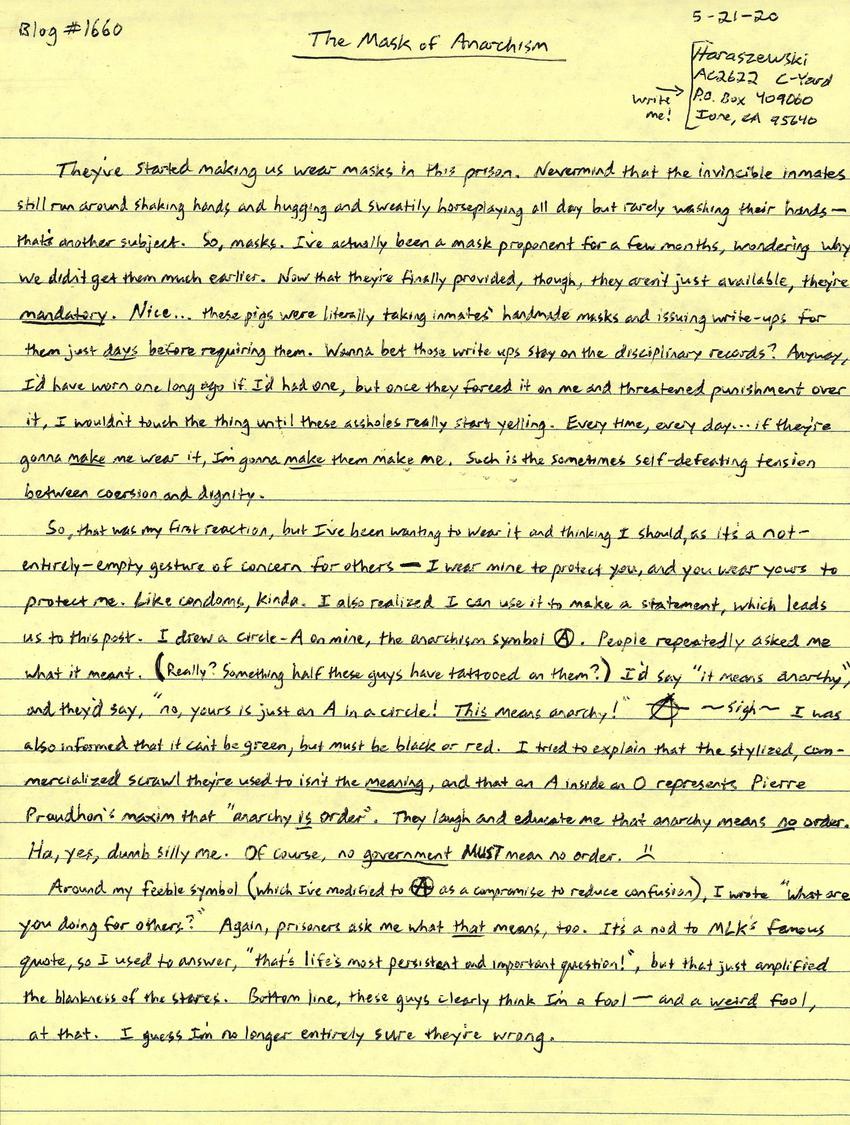 The Mask of Anarchism:

They've started making us wear masks in this prison. Never mind that the invincible inmates still run around shaking hands and hugging and sweatily horse playing all day but rarely washing their hands - that's another subject. So, masks. I've actually been a mask proponent for a few months, wondering why we didn't get them much earlier. Now that they're finally provided, though, they aren't just available, they're mandatory. Nice... these pigs were literally taking inmates' handmade masks and issuing write-ups for them just days before requiring them. Wanna bet those write-ups stay on the disciplinary records? Anyway, I'd have worn one long ago if I'd had one, but once they forced it on me and threatened punishment over it, I wouldn't touch the thing until these assholes really start yelling. Every time, every day... if they're gonna make me wear it, I'm gonna make them make me. Such is the sometimes self-defeating tension between coercion and dignity.
So, that was my first reaction, but I've been wanting to wear it and thinking I should, as it's a not-entirely empty gesture of concern for others- I wear mine to protect you, and you wear yours to protect me. Like condoms, kind of. I also realised I can use it to make a statement, which leads us to this post. I drew a circle- A on mine, the anarchism symbol 'A'. People repeatedly asked me what it meant. (Really? Something half these guys have tattooed on them?) I'd say "it means anarchy," and they'd say, "no, yours is just an A in a circle! This means anarchy!" -sigh- I was also informed that it can't be green, but must be black or red. I tried to explain that the stylised, commercialised scrawl they're used to isn't the meaning, and that an A inside an O represents Pierre Proudhon's maxim that "anarchy is order." They laugh and educate me that anarchy means no order. Ha, yes, dumb silly me. Of course, no government MUST mean no order. :(
Around my feeble symbol (which I've modified to 'A' (image of A in a circle) as a compromise to reduce confusion), I wrote "what are you doing for others?" Again, prisoners ask me what that means, too. It's a nod to MLK's famous quote, so I used to answer, "that's life's most persistent and important question!", but that just amplified the blankness of the stares. Bottom line, these guys clearly think I'm a fool- and a weird fool, at that. I guess I'm no longer entirely sure they're wrong.

I just want to say how much I enjoyed reading your post. And, for the record, I don't think you're a fool, let alone a weird fool! I think that you write beautifully, and intelligently. The way that you look at the world, and life's important questions is inspiring, and I've since read up on Pierre Proudhon's maxim of anarchy, as it is an area I know very little about.

Thank you so much for writing this,

Sending my best wishes, and I hope that you continue to write and challenge the way that you and others see the world.

WOW! They're writing people up for not having a mask on? Crazy. But they were also getting kinda crazy out here with it too. I do think they should be mandatory though, because of those few stubborn ones who will continue to sweatily shake hands and horseplay. While they may have the right to make themselves sick, they should not have the right disregard public safety and make others sick. 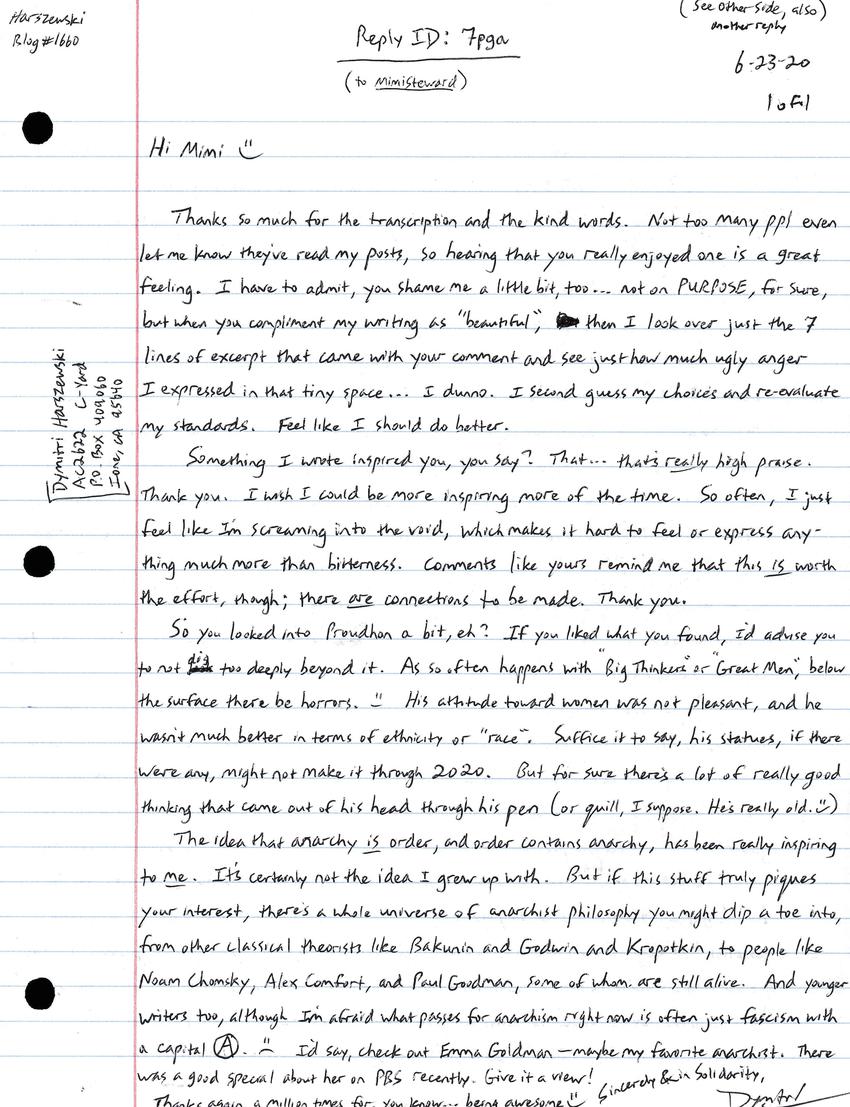 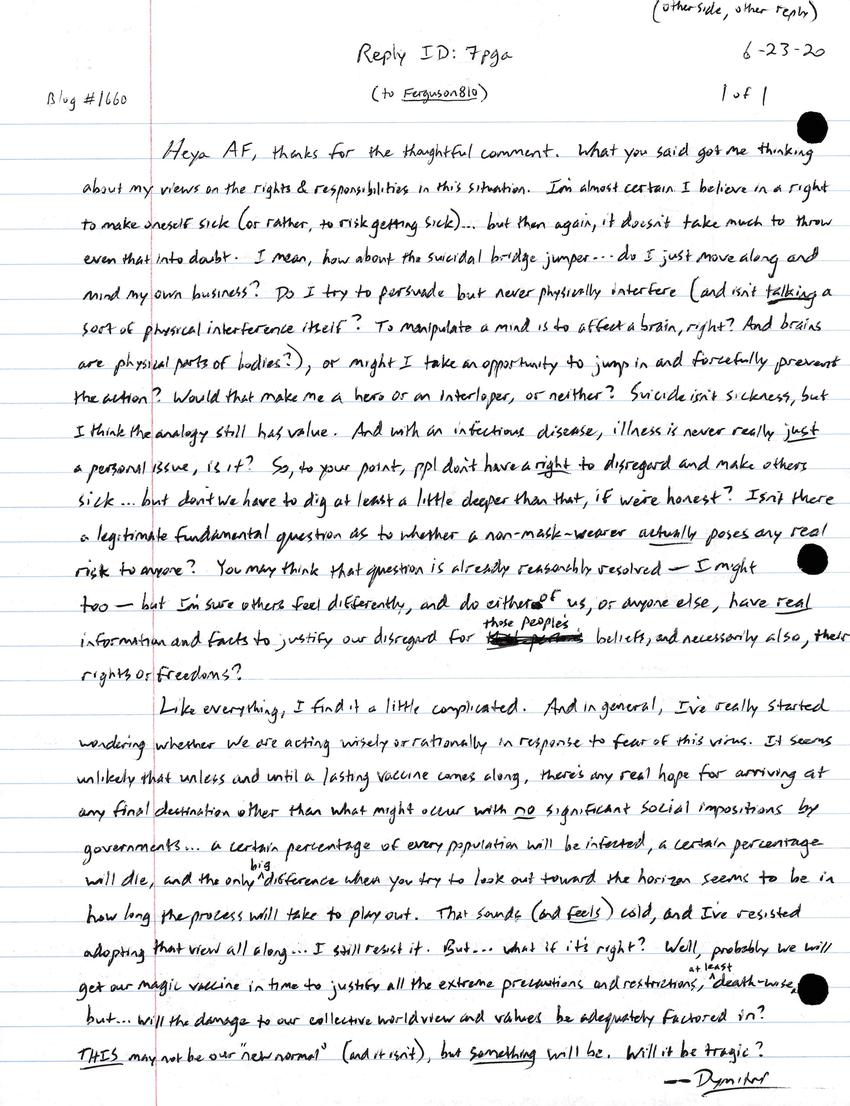