Call for Parole Support and Solidarity! 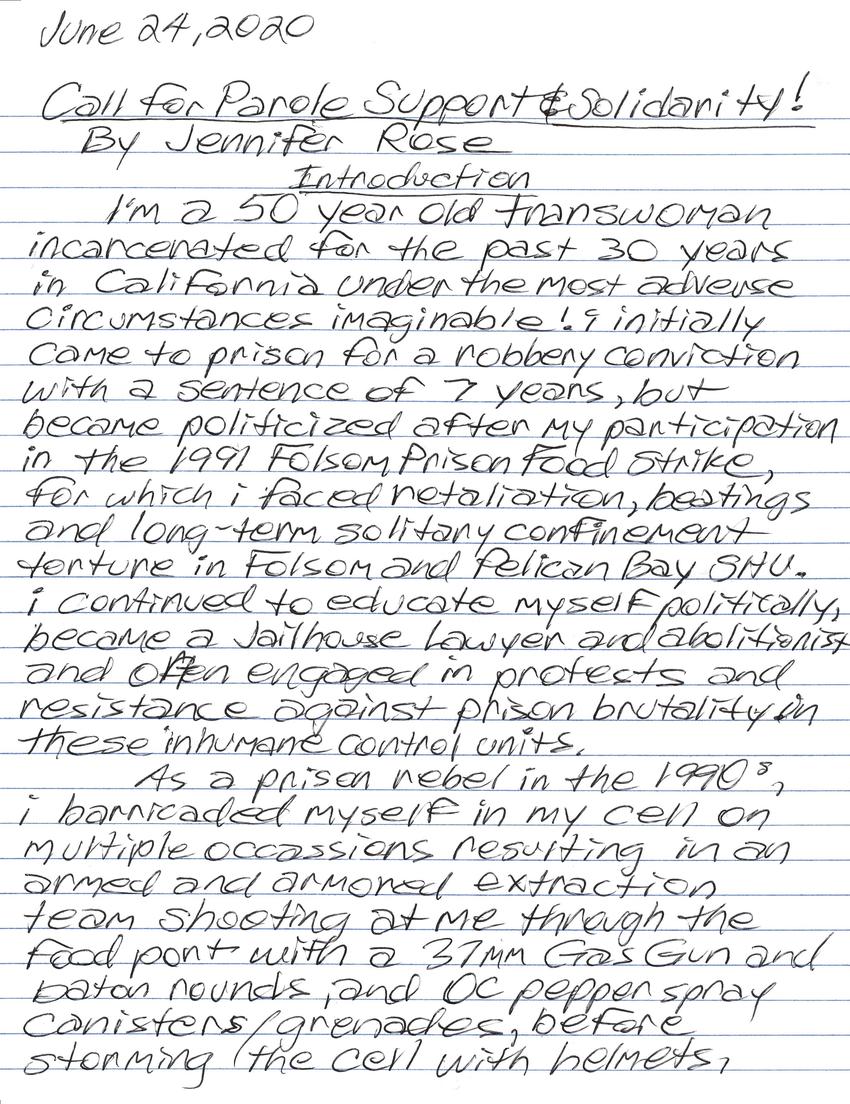 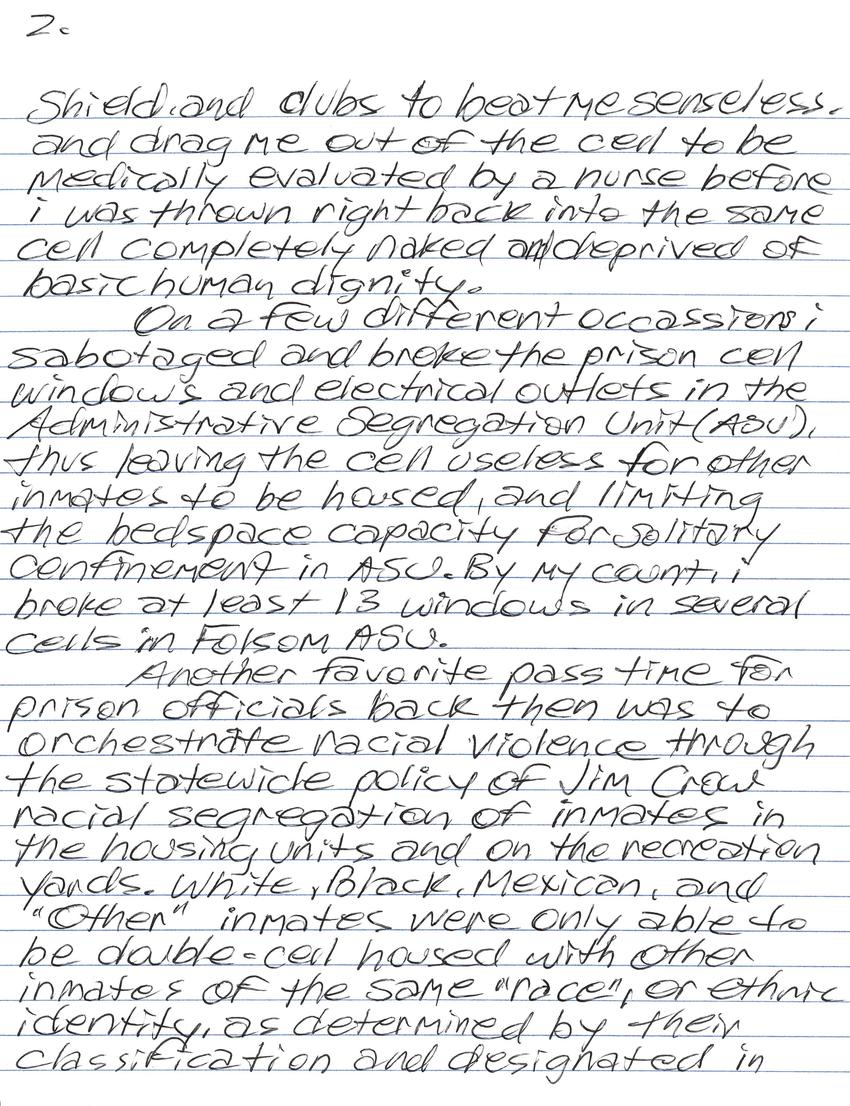 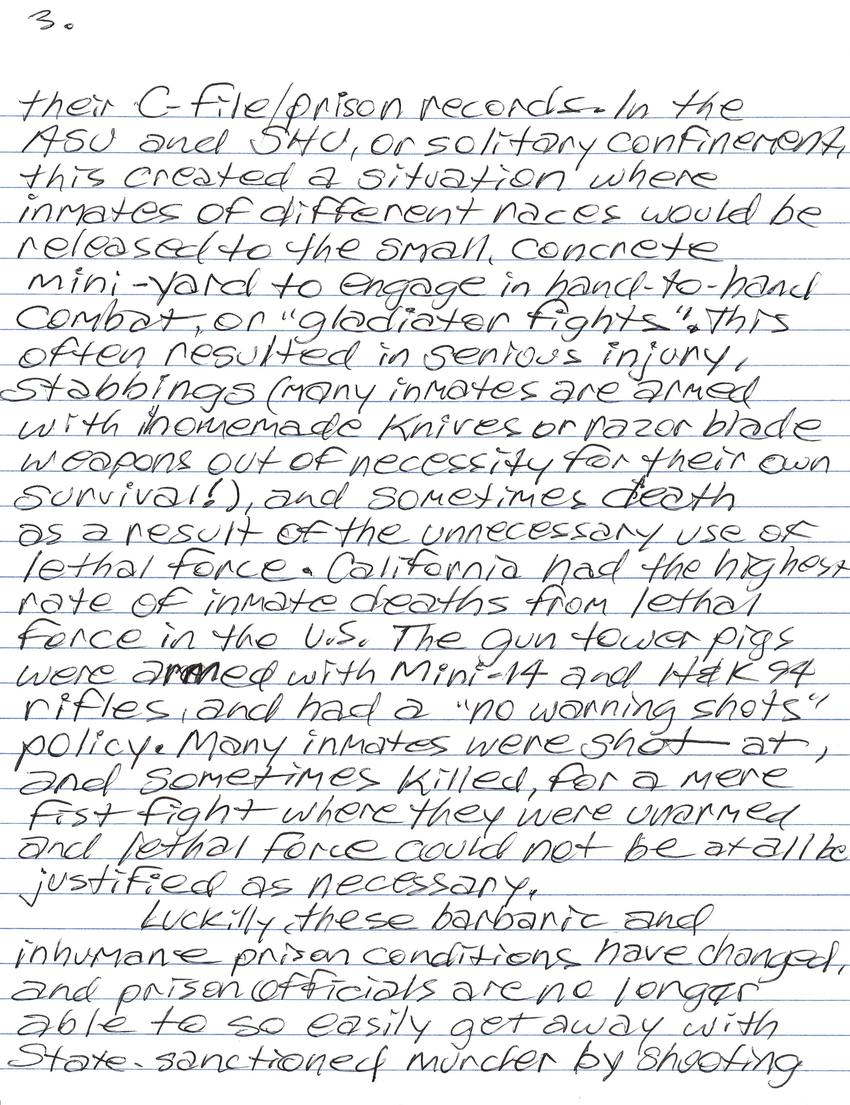 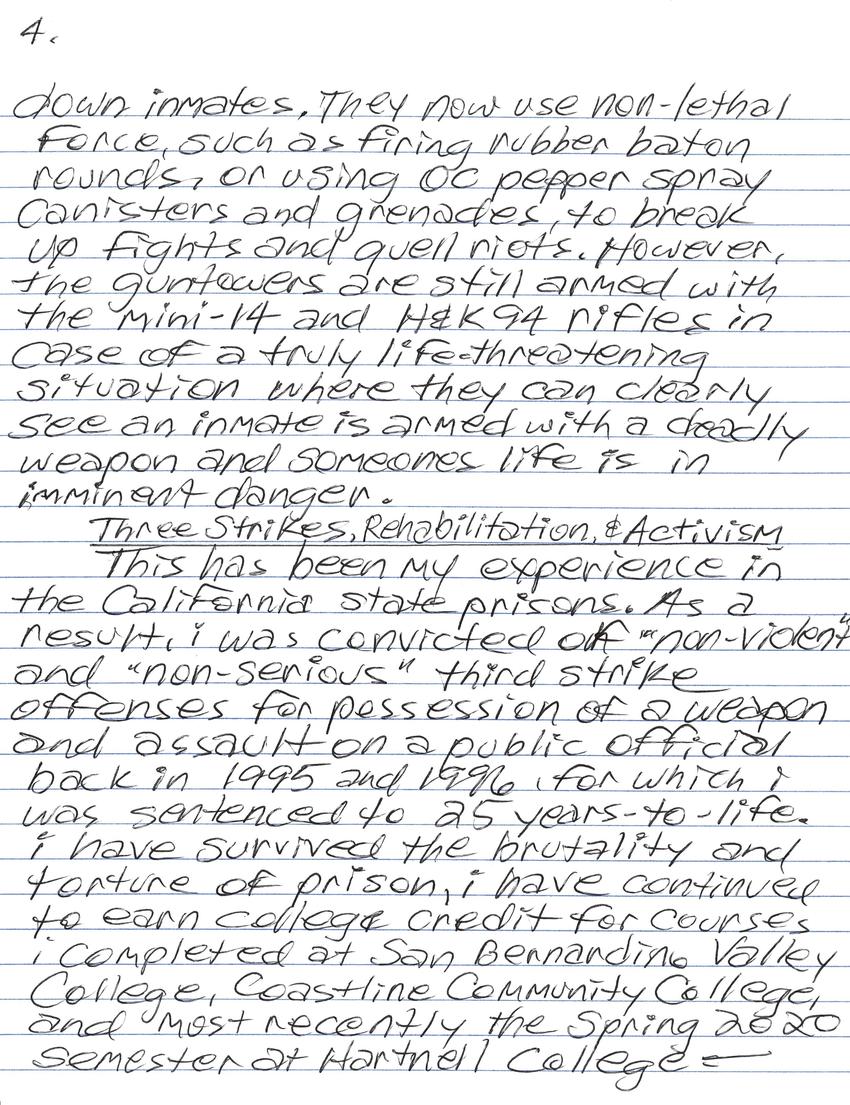 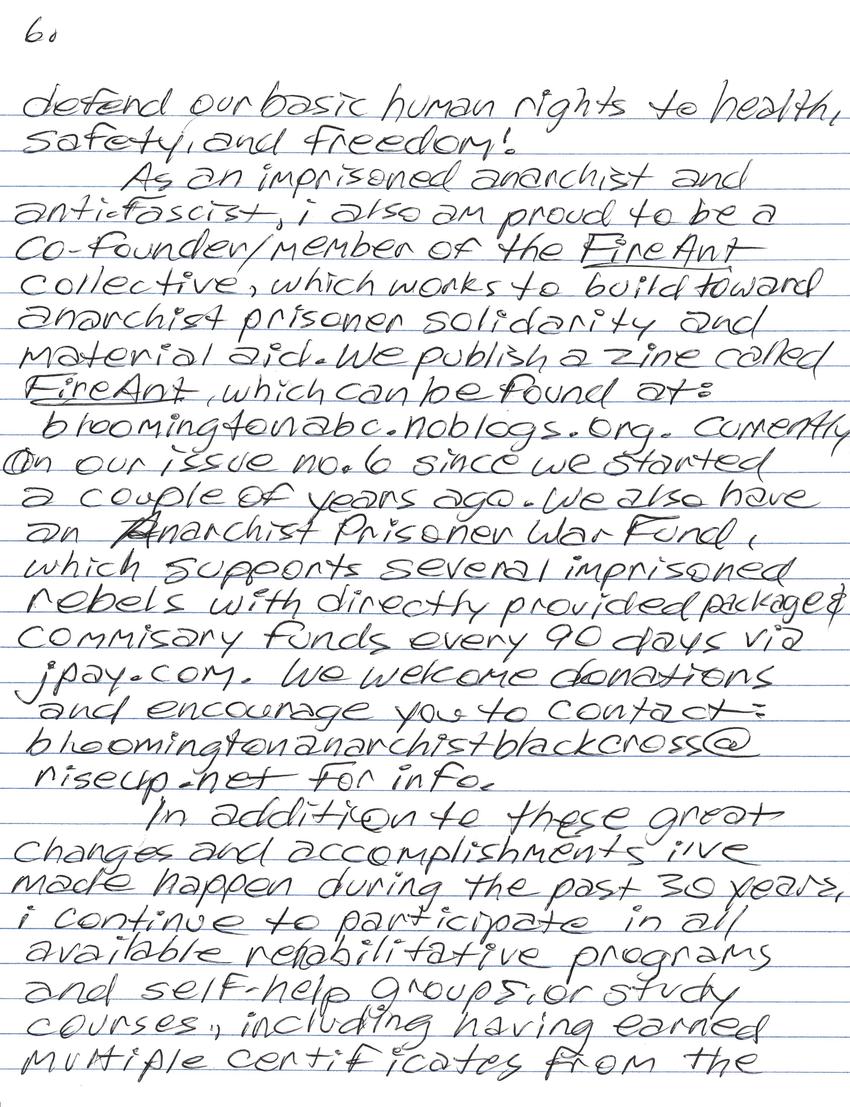 Introduction
I'm a 50 year old transwoman incarcerated for the past 30 years in California under the most adverse circumstances imaginable! I initially came to prison for a robbery conviction with a sentence of 7 years, but became politicized after my participation in the 1991 Folsom Prison Food Strike, for which I faced retaliation, beatings and long-term solitary confinement torture in Folsom and Pelican Bay SHU. I continued to educate myself politically, became a jailhouse lawyer and abolitionist and often engaged in protests and resistance against prison brutality in these inhumane control units.
As a prison rebel in the 1990s, I barricaded myself in my cell on multiple occasions resulting in an armed and armored extraction team shooting at me through the food point with a 37mm Gas Gun and baton rounds, and pepper spray canisters/ grenades, before storming the cell with helmets, shield, and clubs to beat me senseless and drag me out of the cell to be medically evaluated by a nurse before I was thrown right back into the same cell completely naked and deprived of basic human dignity.
On a few different occasions I sabotages and broke the prison cell windows and electrical outlets in the Administrative Segregation Unit (ASU), thus leaving the cell useless for other inmates to be housed, and limiting the bedspace capacity for solitary confinement in ASU. By my count, I broke at least 13 windows in several cells in Folsom ASU.
Another favorite pass time for prison officials back then was to orchestrate racial violence through the statewide policy of Jim Crow racial segregation of inmates in the housing units and on the recreation yards. White, Black, Mexican, and "Other" inmates were only able to be double-cell housed with other inmates of the same "race", or ethnic identity, as determined by their classification and designated in their C-File/ prison records. In the ASU and SHU, or solitary confinement, this created a situation where inmates of different races would be released to the small concrete mini-yard to engage in hand-to-hand combat, or "gladiator fights". This often resulted in serious injury, stabbings (many inmates are armed with homemade knives or razor blade weapons out of necessity for their own survival!), and sometimes death as a result of the unnecessary use of lethal force. California had the highest rate of inmate deaths from lethal force in the US. The gun tower pigs were armed with mini-14 and H&K94 rifles, and had a "no warning shots" policy. Many inmates were shot at, and sometimes killed, for a mere fist fight where they were unarmed and lethal force could not be at all justified as necessary.
Luckily, these barbaric and inhumane prison conditions have changed, and prison officials are no longer able to so easily get away with state-sanctioned murder by shooting down inmates. They now use non-lethal force, such as firing rubber baton rounds, or using pepper spray canisters and grenades to break up fights and quell riots. However, the gun towers are still armed with the mini-14 and H&K94 rifles in case of a truly life-threatening situation where they can clearly see an inmate is armed with a deadly weapon and someones life is in imminent danger.

Three Strikes, Rehabilitation & Activism
This has been my experience in the California state prisons. As a result, I was convicted of "non-violent" and "non-serious" third strike offenses for possession of a weapon and assault on a public official back in 1995 and 1996 for which I was sentenced to 25 years-to-life. I have survived the brutality and torture of prisons, I have continued to earn college credit for courses I completed at San Bernardino Valley College, Coastline Community College, and most recently the Spring 2020 Semester at Hartnell College Rising Scholars program here at Salinas Valley State Prison.
I have lived for the past 14 years as a transgender woman, undergoing a regimen of hormone therapy, and am currently approved for a pending sex-reassignment surgery (SRS). I've been active for the past decade as a leadership member of Black & Pink (2010-15), working as a legal advocate and community organizer on behalf of incarcerated transwomen to change public policy, improve access to basic trans healthcare, and for better prison conditions and safety accommodations for transwomen who are housed in men's facilities under extreme adverse circumstances. Hundreds have suffered sexual abuse and gender violence, and several have been murdered, while prisons officials turned a blind eye and denied out very existence! We survive!
I continue to work with attorneys and legal advocates as a member of the National Lawyer Guild, and actively work to empower transwomen and defend our basic human rights to health, safety and freedom!
As an imprisoned anarchist and anti-fascist, I also am proud to be a co-founder/member of the Fire Ant collective, which works to build toward anarchist prisoner solidarity and material aid. We publish a zine called Fire Ant, which can be found at: bloomingtonabc.noblogs.org. Currently on our issue no.6 since we started a couple of years ago. We also have an Anarchist Prisoner War Fund, which supports several imprisons rebels with directly provided package & commissary funds every 90 days via jpay.com. We welcome donations and encourage you to contact bloomingtonanarchistblackcross@riseup.net for info.
In addition to these great changes and accomplishments I've made happen during the past 30 years, I continue to participate in all available rehabilitative programs and self-help groups or study courses, including having earned multiple certificates from the Alternatives to Violence Project (AVP) California Criminal Offender Rehabilitation Establishment (CORE), and Getting Out by Going In (GOGI). I'm in the Narcotics Anonymous (NA) 12-step program and am a recovering addict undergoing substance abuse treatment, so that I can live a clean and sober life when I am eventually released on parole.

Parole Preparation & Plans
I am currently eligible for early parole consideration on July 28 2020, and have been very busy with parole preparations. I have received three acceptance letters from transitional housing programs, including:
- Options Recovery Services in Berkeley
GEO Re-Entry Services in San Francisco
The Amity Foundation in Los Angeles
I hope to parole to one of the first two in the San Francisco Bay Area, where I have many friends and a lot of community support. I plan to continue my legal advocacy work as a volunteer at TGI Justice Project. Also, I'm seeking admission into UC Berkeley Underground Scholars Initiative, or San Fransisco State University Project Rebound, both of which work with formerly incarcerated people who want to continue their educational goals of earning an Associate Arts (AA) degree and/ or bachelors (BA) degree.

Parole Support Letters
I welcome anyone interested in helping me be found "suitable" for parole, so I can be released and live my life in FREEDOM as a productive member of society, please consider writing a support letter on my behalf, stating who you are, your employment and/or occupation credentials, and why you think I'm "suitable" for parole. You may also mention that none of my criminal offenses involved serious bodily injury, and that as a "changed" person from who I was 30 years ago (when I was a young idiot with no focus or goals in life) I'm no longer any danger or "unreasonable risk" to public safety. Additionally, the existing community-based alternatives to incarceration, such as the transitional housing programs I've been accepted at, render my continued imprisonment quite simply unnecessary!
Finally, you should also convince the parole board that I'm vulnerable to severe Covid-19 symptoms due to my age, 50, and chronic hepatitis C illness. That this is also a reason to grant me parole suitability and release me to prevent possible Covid-19 infection in prison, where social distancing is impossible and adequate medical care is not easily available.
All support letters for my parole, and advocating for my release should be addressed to:
California Department of Corrections and Rehab
Board of Parole Hearings
PO BOX 4036
Sacramento, CA 95812-4036

Please also send me a copy at the below address!

Until All Are Free!
Thank you for your support and solidarity!
I look forward to joiningyou all on the outside during this historic moment of nationwide popular revolt and insurrectionary action in the cities and streets across the US. We are witnessing the last gasp and fall of white supremacy as racist and Confederate Statues or monuments are torn down! We will build a new society on the ruins of the old, based on autonomy, freedom, voluntary cooperation and mutual aid/ solidarity! Now is the time to end systemic racism, and mass incarceration, which are a continuation of the American genocide and slavery of the past that were merely "reformed" by the 13th Amendment and Civil Rights. I envision a world without police and prisons!
I welcome you to post your comments, or write me directly with feedback, criticism, or suggestions/ support:
Jennifer Rose, E23852
Salinas Valley State Prison
PO BOX 1050
Soredad CA 93960
"USA"
Free Turtle Island!

Hi Jennifer!
I worked on the transcription for your post.
Thanks for writing and sharing your story!
Your experiences are incredibly meaningful and I wish you all the best of luck and hope for the future. Parole is just around the corner. 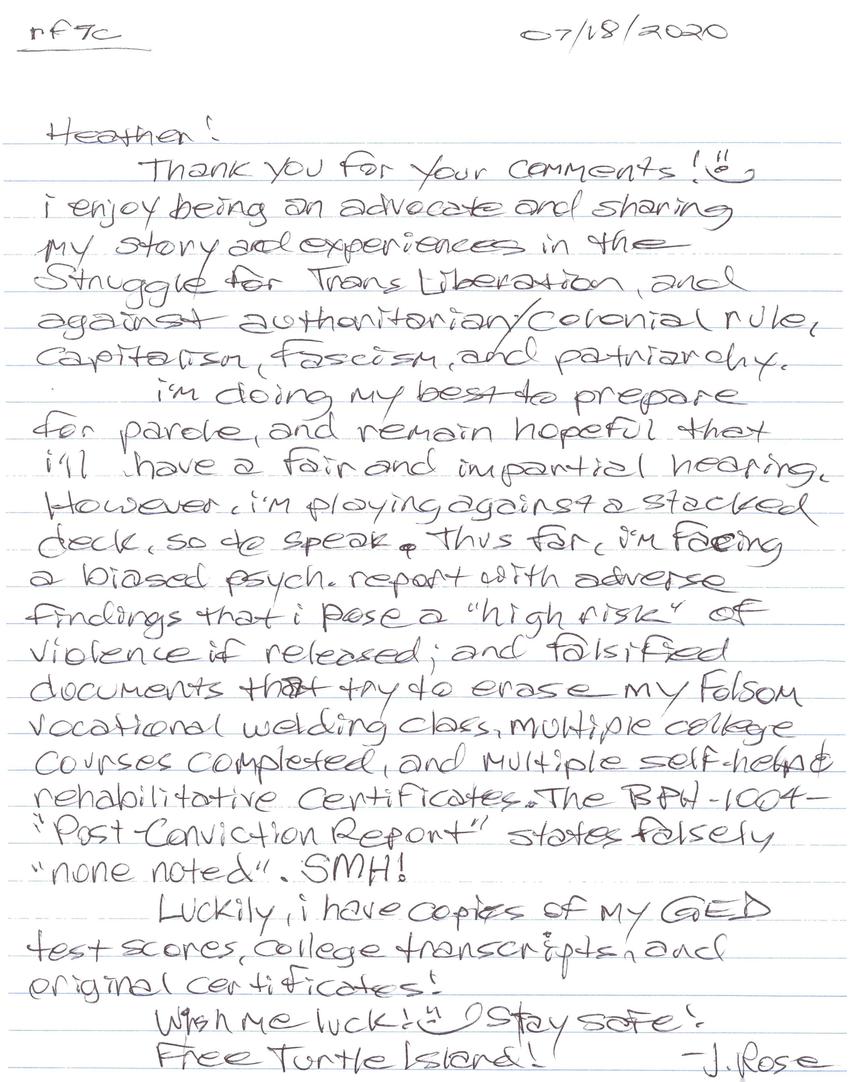 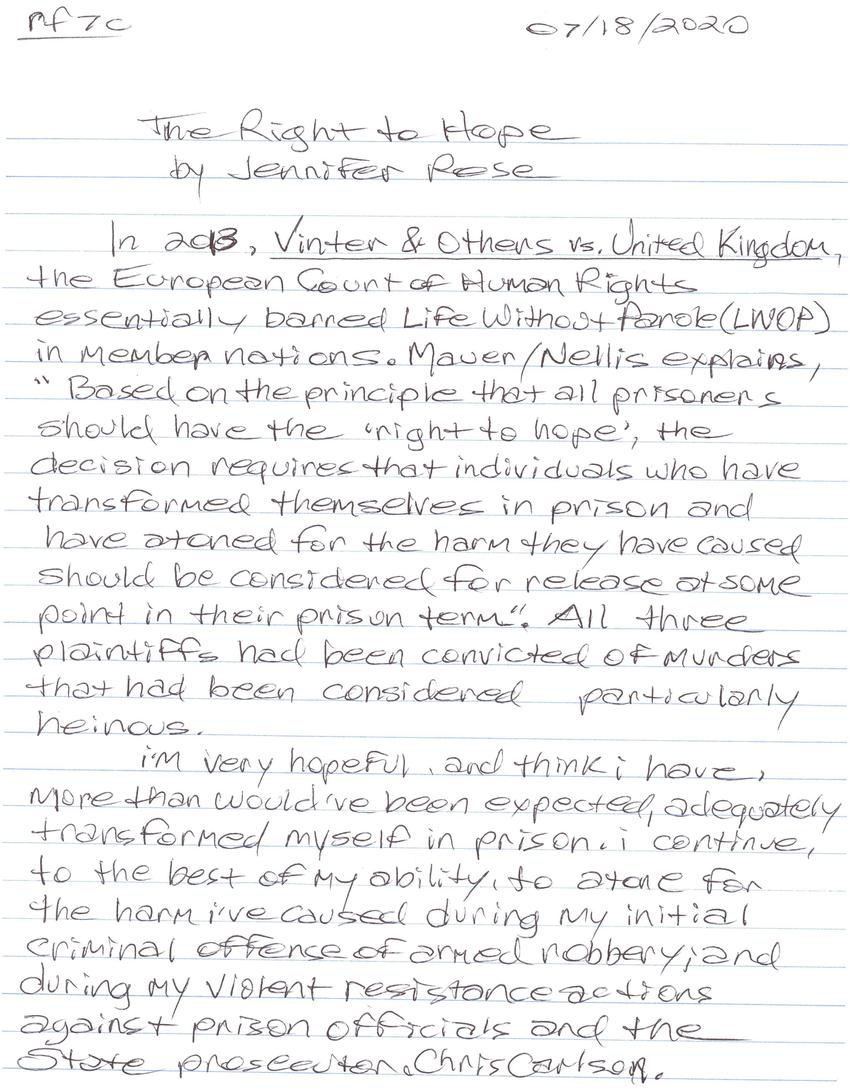 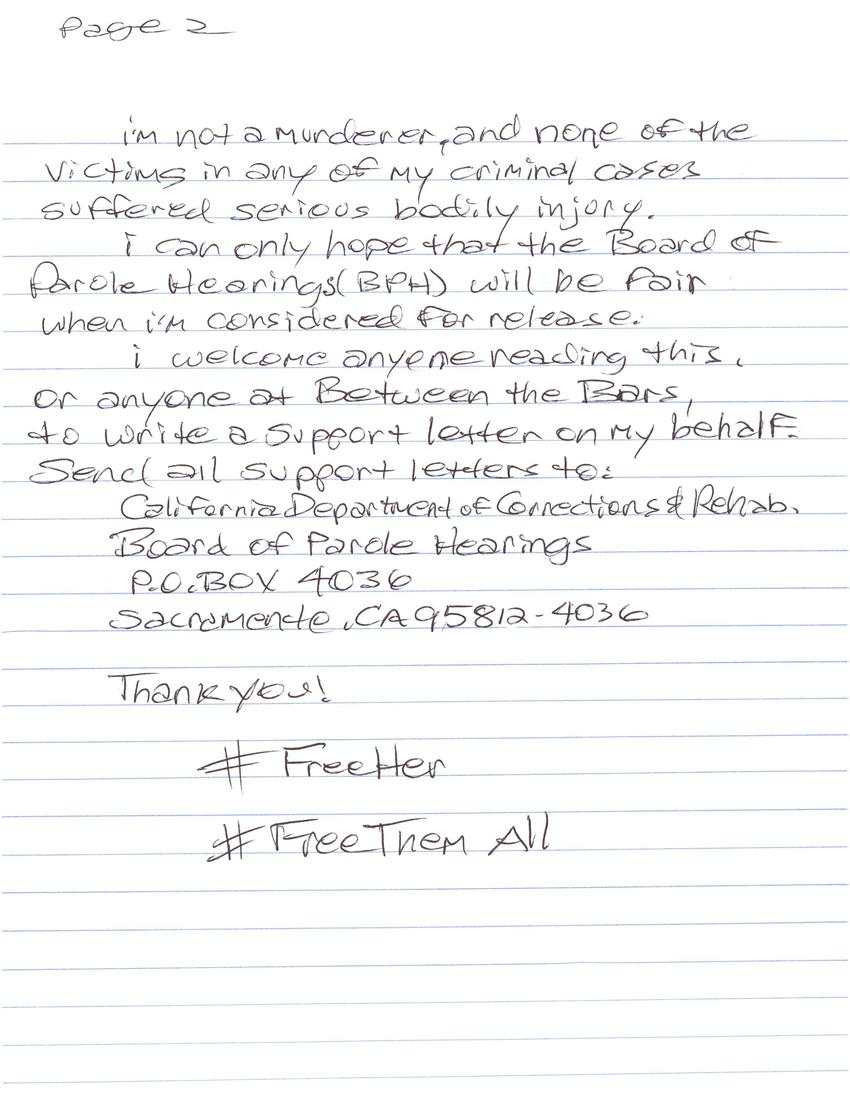 Dear Jennifer,
it's 10 pm CET, so in one half an hour you got your parole hearing and I just hope you get the result you wish for.
It is interesting to me that you mentioned that court case about barring LWOP in Europe, as the Netherlands is kind of the only country that de facto still has LWOP. Officially there is a way out but no one sentenced to a life sentence has made it out yet. Most Dutch people don't know this and have the impression their prison system is very liberal and rather too soft. There also is a conflict with the European Court because of this.
Again, fingers crossed and all the best!
Warm greetings,
Julia
Dear Jennifer,
I am sorry you did not get parole, and I really hope you keep on fighting. Also, in case this smells like transphobia I hope you have contact with organisations to push back on that.
Warm greetings
Julia
You deserve to spend your useless life in prison, disgusting criminal.
You're not an "activist" for "trans liberation"...you just use this fictional shit to disguise your real nature (i.e. being a natural born criminal)
Rot in your cell