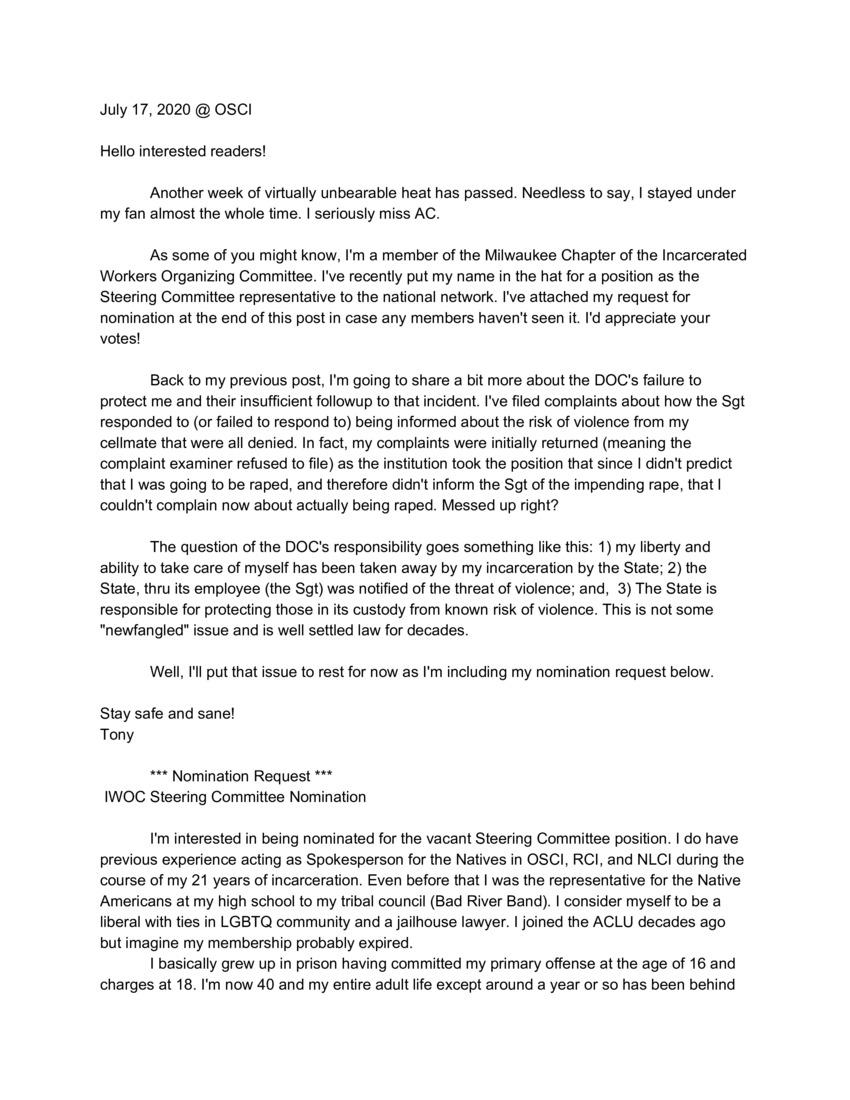 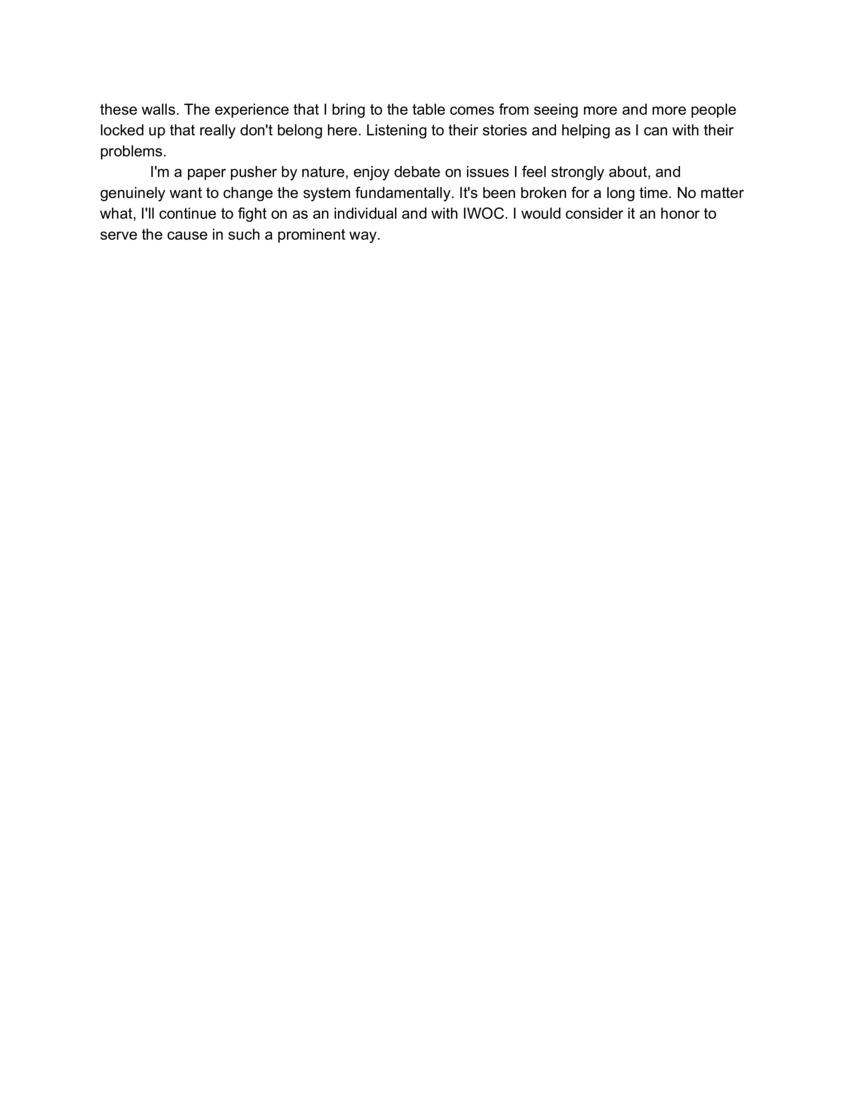 Another week of virtually unbearable heat has passed. Needless to say, I stayed under my fan almost the whole time. I seriously miss AC.

As some of you might know, I'm a member of the Milwaukee Chapter of the Incarcerated Workers Organizing Committee. I've recently put my name in the hat for a position as the Steering Committee representative to the national network. I've attached my request for nomination at the end of this post in case any members haven't seen it. I'd appreciate your votes!

Back to my previous post, I'm going to share a bit more about the DOC's failure to protect me and their insufficient followup to that incident. I've filed complaints about how the Sgt responded to (or failed to respond to) being informed about the risk of violence from my cellmate that were all denied. In fact, my complaints were initially returned (meaning the complaint examiner refused to file) as the institution took the position that since I didn't predict that I was going to be raped, and therefore didn't inform the Sgt. of the impending rape, that I couldn't complain now about actually being raped. Messed up right?

The question of the DOC's responsibility goes something like this: 1) my liberty and ability to take care of myself has been taken away by my incarceration by the State; 2) the State, thru its employee (the Sgt) was notified of the threat of violence; and 3) The State is responsible for protecting those in its custody from the known risk of violence. This is not some "newfangled" issue and is well-settled law for decades.

Well, I'll put that issue to rest for now as I'm including my nomination request below.

I'm interested in being nominated for the vacant Steering Committee position. I do have previous experience acting as Spokesperson for the Natives in OSCI, RCI, and NLCI during the course of my 21 years of incarceration. Even before that, I was the representative for the Native Americans at my high school to my tribunal council (Bad River Band). I consider myself to be a liberal with ties in LGBTQ community and a jailhouse lawyer. I joined the ACLU decades ago but imagine my membership probably expired.

I basically grew up in prison having committed my primary offense at the age of 16 and charges at 18. I'm now 40 and my entire adult life except around a year or so has been behind these walls. The experience that I bring to the table comes from seeing more and more people locked up that really don't belong here. Listening to their stories and helping as I can with their problems.

I'm a paper pusher by nature, enjoy the debate on issues I feel strongly about, and genuinely want to change the system fundamentally. It's been broken for a long time. No matter what, I'll continue to fight on as an individual and with IWOC. I would consider it an honor to serve the cause in such a prominent way.

Awesome dude. I hope you win the nomination. 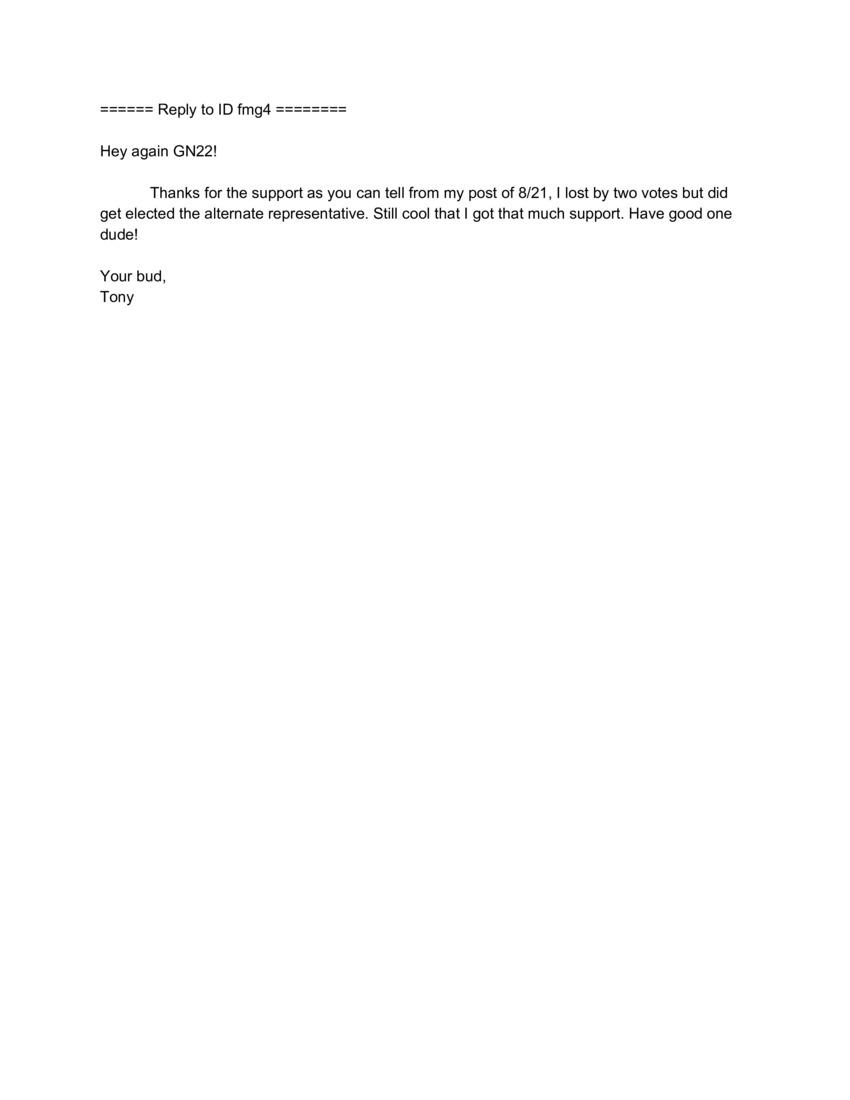 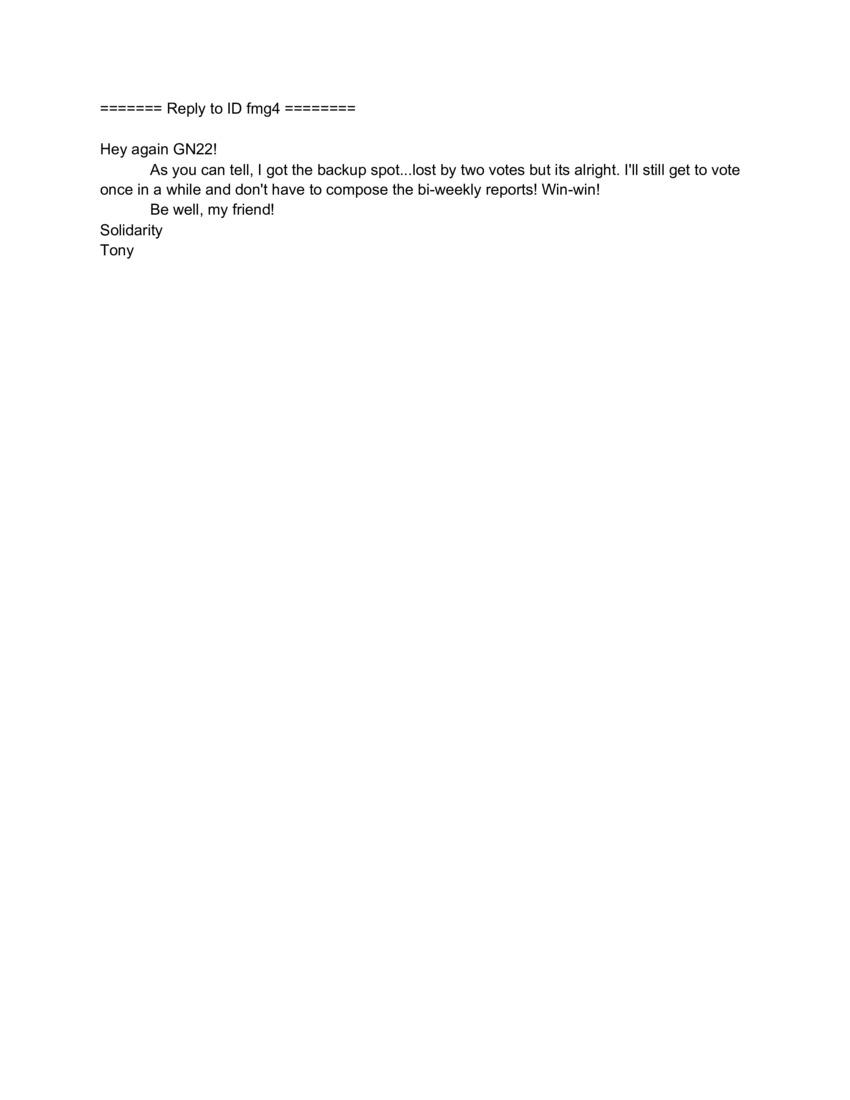