Grammy, You're A Racist! 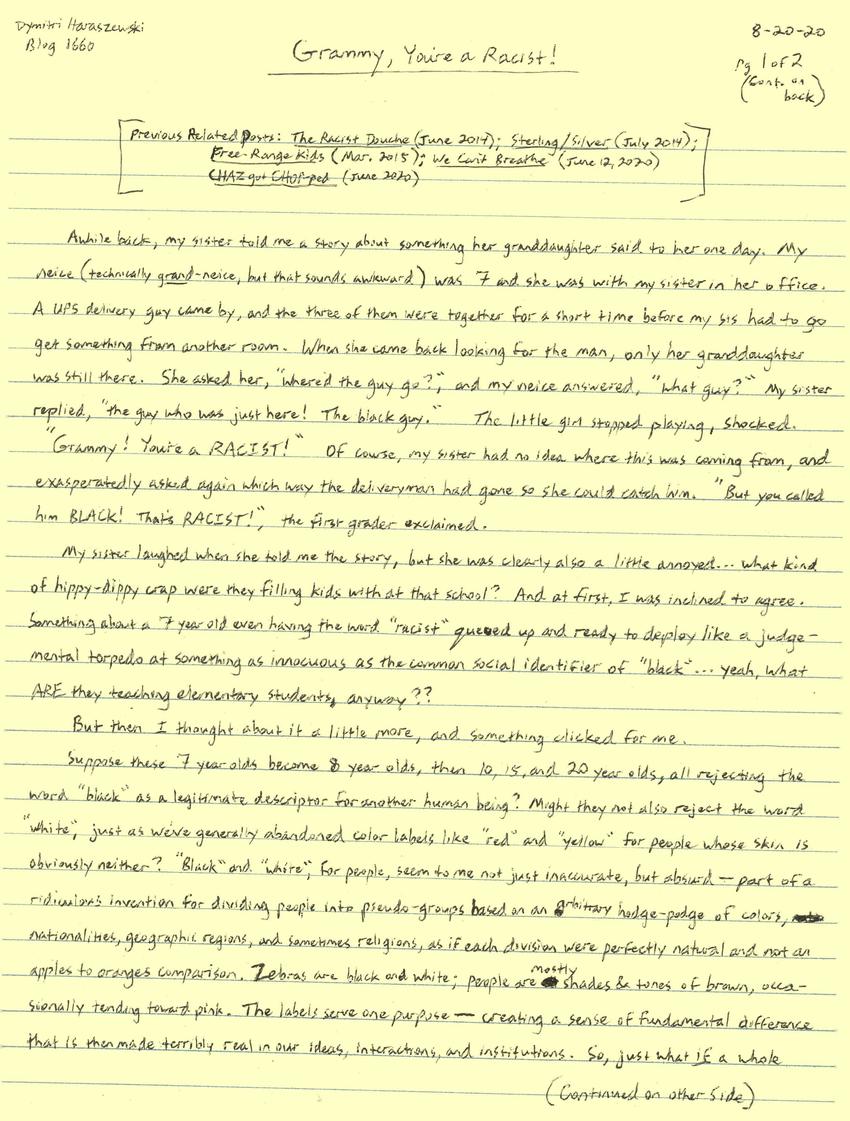 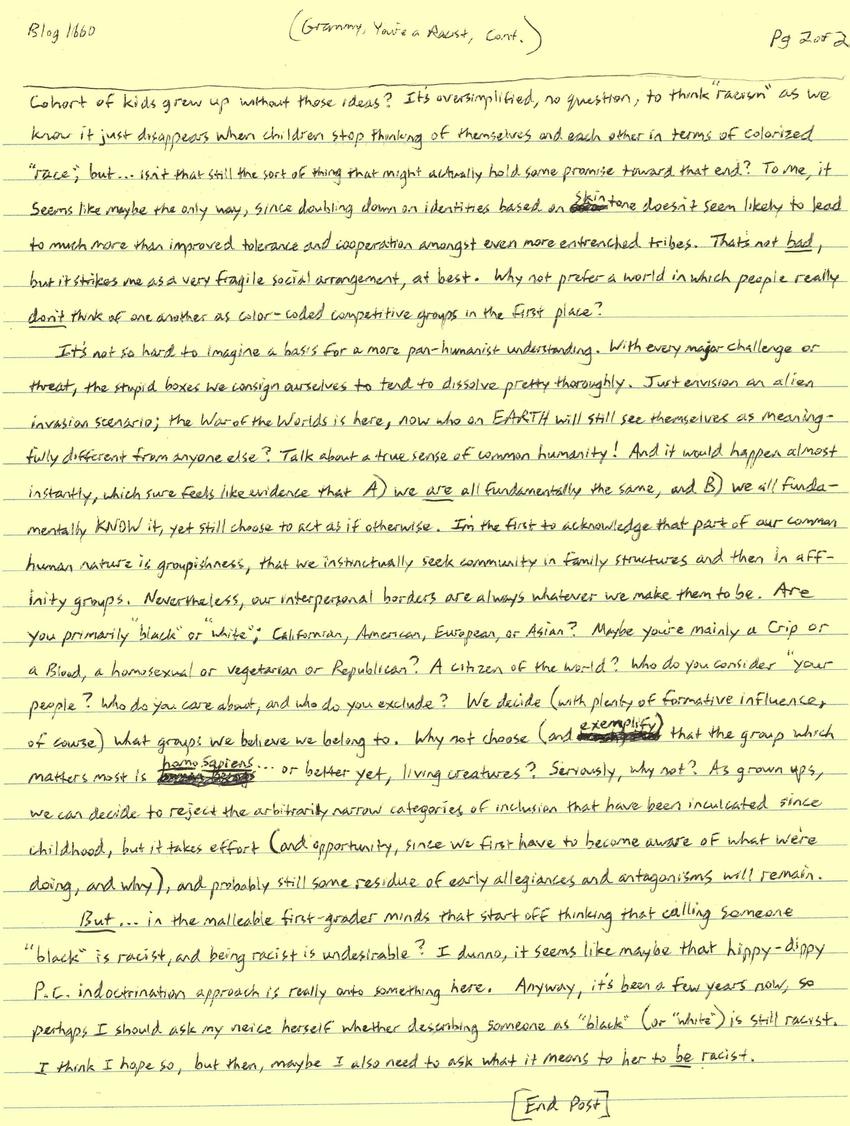 Awhile back,my sister told me a story about something hr granddaughter said to her one day. My niece (technically grand-niece, but that sounds awkward) was 7 an she was with my sister in her office. A UPS delivery guy came by, an the three of them were together for a short time before my sis had to go get something from another room. When she came back looking for the man, only her granddaughter was still there. She asked her, "where the guy go?", and my niece answered, "What guy?" My sister replied, "the guy who was just here! The black guy." The little girl stopped playing, shocked. "Grammy! You're a RACIST!" Of course, my sister had no idea where this was coming from, and exasperatedly asked again which way the deliveryman had gone so she could catch him. "But you called him BLACK! That's RACIST", the first grader exclaimed.

My sister laughed when she told he the story, but she was clearly also a little annoyed... what kind of hippy-dippy cray were they filling kinds with at school? And at first, I was inclined to agree. Something about a 7 year old even having the word "racist" queued up and ready to deploy like a judgemental torpedo at something as innocuous as the common social identifier of "black"... yeah, what ARE they teaching elementary students anyway??

But then I thought about it a little more, and something clicked for me. Suppose these 7 year olds become 8 year olds, then 10, 15, and 20 year olds, all rejecting the word "black" as a legitimate descriptor for another human being? Might they not also reject the word "white", just as we've generally abandoned color labels like "red" and "yellow" for people whose skin is obviously neither? "Black" and "White", for people, seem to be no just inaccurate, but absurd-part of a ridiculous invention for dividing people into pseudo-groups based on an arbitrary Hodge-podge of colors, nationalities, geographic regions, and sometimes religions, as if each division were perfectly natural and not an apples and oranges comparison. Zebras are black and white; people are mostly shades & tomes of brown, occasionally tending toward pink. The labels serve one purpose - creating a sense of fundamental difference that is then made terribly, real in our ideas, interactions, and institutions. So just what if a whole cohort of kids grew up without those days? It's oversimplified, no questions, to think "Racism" as we know it just disappears when children stop thinking of themselves and each other in therms of colored "race", but... inst that still the sort of thing that might actually hold some promise toward that end? To me, it seems like maybe the only way, since doubling down on identities based on skin-tone doesn't seem likely to lead to much more than improved tolerance and cooperation amongst even more entrenched tribes. That's not bad, but it strikes me as a very fragile social arrangement, at best. Why not prefer a world in which people really don't think of one another as color-coded competitive groups int he first place? It's not so hard to imagine a basis for a more pan-humanist understanding. With every major challenge or threat, the stupid boxes we consign ourselves to tend to dissolve pretty thoroughly. Just envision an alien invasion scenario; the war of the worlds is here, now who on EARTH will still see themselves as meaningfully different from anyone else? Talk about a true sense of common humanity! And it would happen almost instantly, which sure feels like evidence that A)we are all fundamentally the same, and B) we all fundamentally KNOW it, yet still choose to act as if otherwise. I'm the first to acknowledge that part of our common human nature is groupishness, that we instinctually seek community in family structures and then in affinity groups. Nevertheless, our interpersonal borders are always whatever we make them to be. Are you primarily "black" or "white"; California, American, European, or Asian? Maybe you're mainly a Crip or a Blood, a homosexual or vegetarian or Republican? A citizen of the world? Who do you consider "your people? Who do you care about, and who do you exclude? We decide (With priority of formative influence, of course) what groups we believe we belong to. Why not choose (and exemplify) that the group which matters most is homo-sapiens.. or better yet, living creatures? Seriously, why not? As grownups, we can decide to reject the arbitrarily narrow categories of inclusion that have been inculcated since childhood, but it takes effort (and opportunity, since we first have to become aware of what we're doing, and why), and probably still some residue of early allegiance and antagonisms will remain. But... in the malleable first-grader minds that start off thinking that calling someone "black" is racist, and being racist is undesirable? I dunno, it seems like maybe that hippy-dippy P.C. indoctrination, approach is really onto something here. Anyway, it's been a few years now, so perhaps I should ask my niece herself whether describing someone as "black" (or "white") is still racist. I think I hope so, but then, maybe I also need to ask what it means to her to be racist.