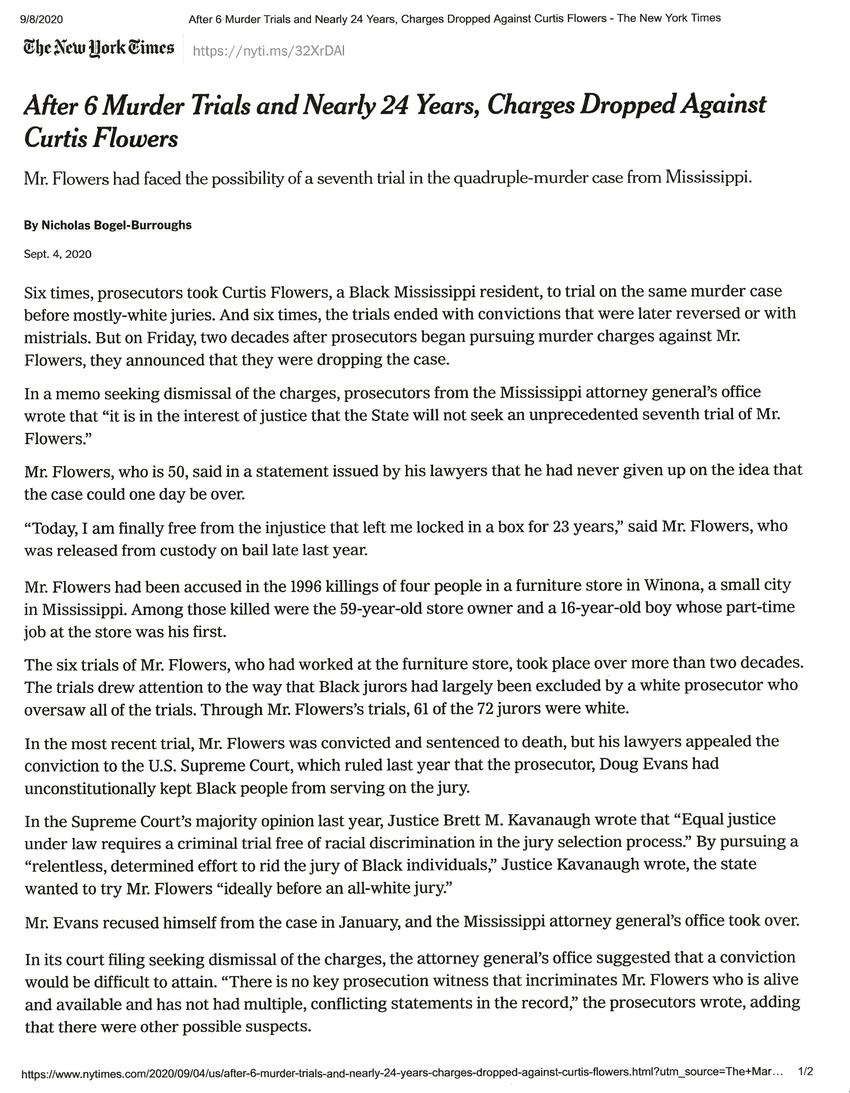 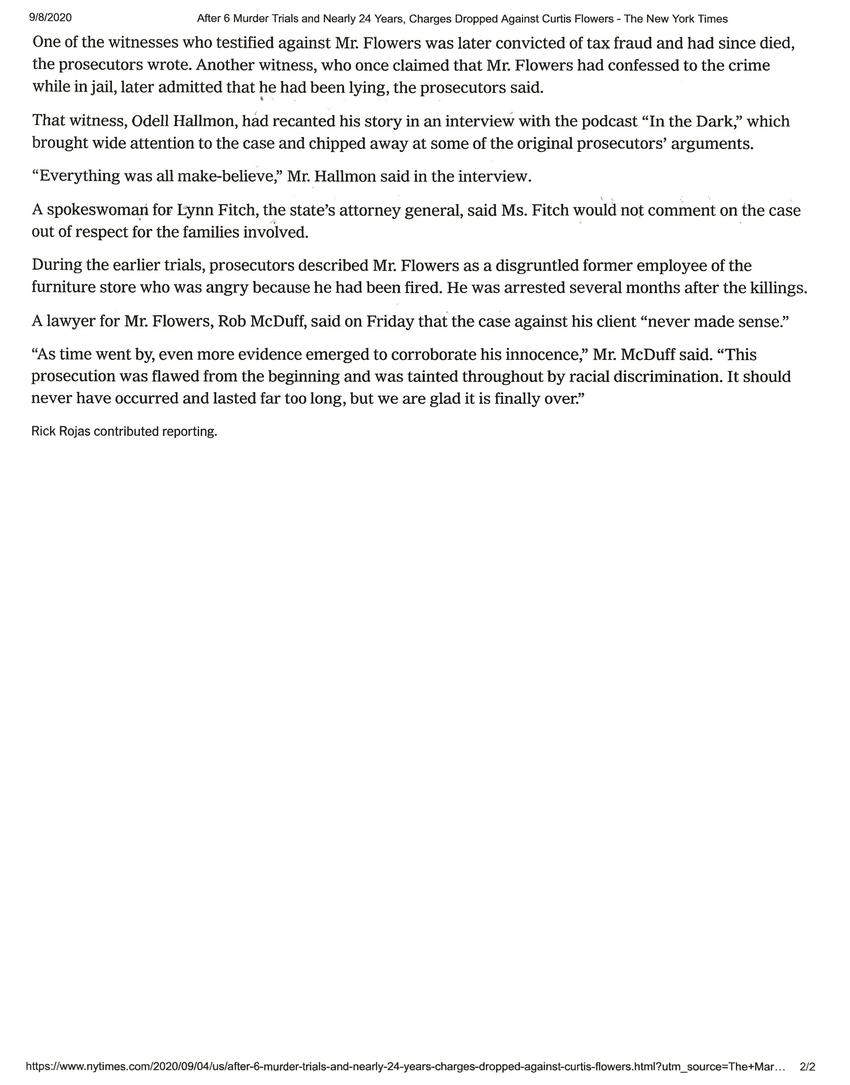 Mr. Flowers had faced the possibility of a seventh trial in the quadruple-murder case from Mississippi.

Six times, prosecutors took Curtis Flowers, a Black Mississippi resident, to trial on the same murder case
before mostly-white juries. And six times, the trials ended with convictions that were later reserved or with
mistrials. But on Friday, two decades after prosecutors began pursuing murder charges against Mr.
Flowers, they announced that they were dropping the case.

In a memo seeking dismissal of the charges, prosecutors from the Mississippi attorney general's office
wrote that "it is in the interest of justice that the State will not seek an unprecedented seventh trial of Mr.
Flowers."

Mr. Flowers, who is 50, said in a statement issued by his lawyer that he had never given up on the that
the case could one day be over.

"Today, I am finally free from the injustice that left me locked in a box for 23 years," said Mr. Flowers, who
was released from custody on bail late last year.

Mr. Flowers had been accused in the 1996 killings of four people in a furniture store in Winona, a small city
in Mississippi. Among those killed were the 56-year-old store owner and a 16-year-old boy whose part-time
job at the store was his first.

The six trials of Mr. Flowers, who had worked at the furniture store, took place over more than two decades.
The trials drew attention to the way that Black jurors had largely been excluded by a white prosecutor who
oversaw all of the trials. Through Mr. Flowers's trials, 61 of the 72 jurors were white.

In the most recent trail. Mr. Flowers was convicted and sentenced to death, but his lawyers appealed the
conviction to the U.S. Supreme Court, which ruled last year that the prosecutor, Doug Evans had
unconstitutionally kept Black people from serving on the jury.

Mr. Evans recused himself from the case in January, and the Mississippi attorney general's office took over.

In its court filing seeking dismissal of the charges, the attorney general's office suggested that a conviction
would be difficult to attain."There is no key prosecution witness that incriminates Mr. Flowers who is alive
and available and has not had multiple, conflicting statements in the record," the prosecutors wrote, adding
that there were other possible suspects.

Page 2/2
9/8/2020 After 6 Murder Trails and Nearly 24 Years, Charges Dropped Against Curtis Flowers - The New York Times
One of the witnesses who testified against Mr. Flowers was later convicted of tax fraud and had since died,
the prosecutors wrote. Another witness, who once claimed that Mr. Flowers had confessed to the crime
while in jail, later admitted thathe had been lying, the prosecutors said.

That witness, Odell Hallmon, had recanted his story in an interview with the podcast "In the Dark," which
brought wide attention to the case and chipped away at some of the original prosecutors' arguments.

"Everything was all make-believe," Mr. Hallmon said in the interview.

A spokeswoman for Lynn Fitch, the state's attorney general, said Ms. Fitch would not comment on the case
out of respect for the families involved.

During the earlier trials, prosecutors described Mr. Flowers as a disgruntled former employee of the
furniture store who was angry because he had been fired. He was arrested several months after the killings.

A lawyer for Mr. Flowers, Rob McDuff, said on Friday that the case against his client "never made sense."

"As time went by, even more evidence emerged to corroborate his innocence," Mr. McDuff said. "This
prosecution was flawed from the beginning and was tainted throughout by racial discrimination. It should
never have occurred and lasted far too long, but we are glad it is finally over."