With Over 115,000 Confirmed Cases, Incarcerated People Are Challenging Deadly Pandemic Conditions in Prisons 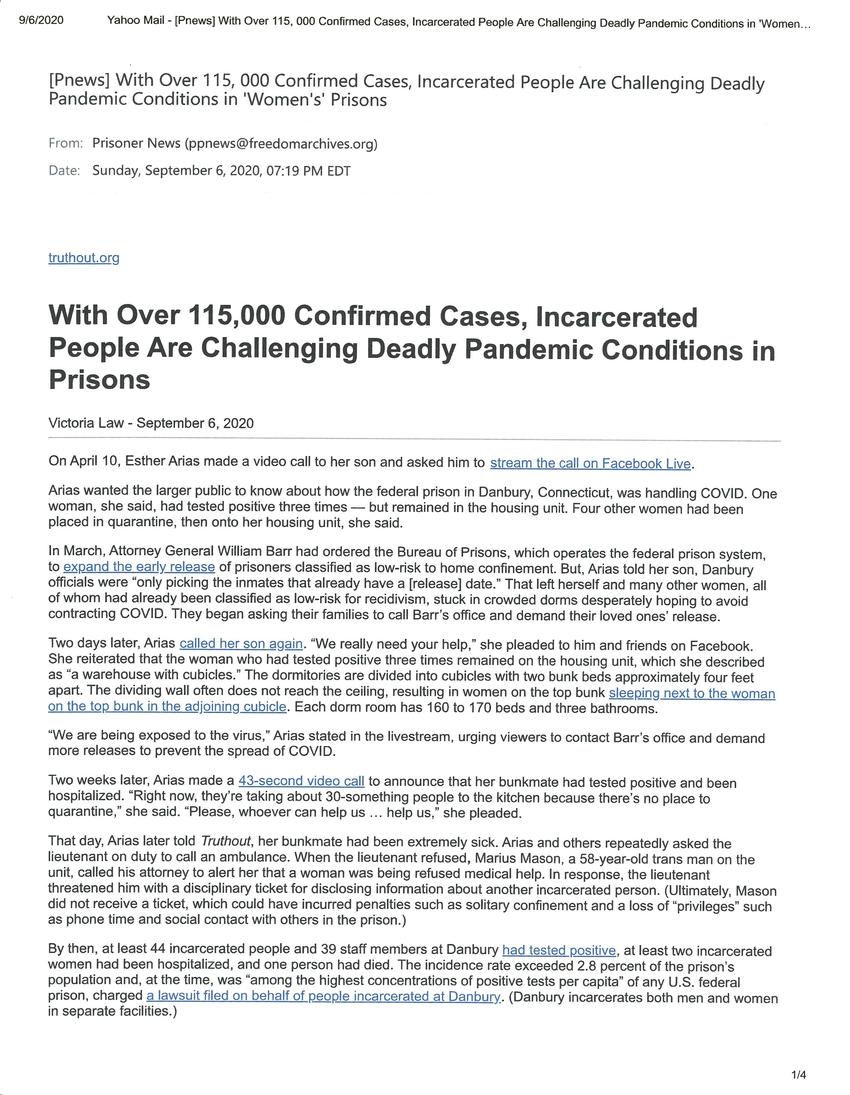 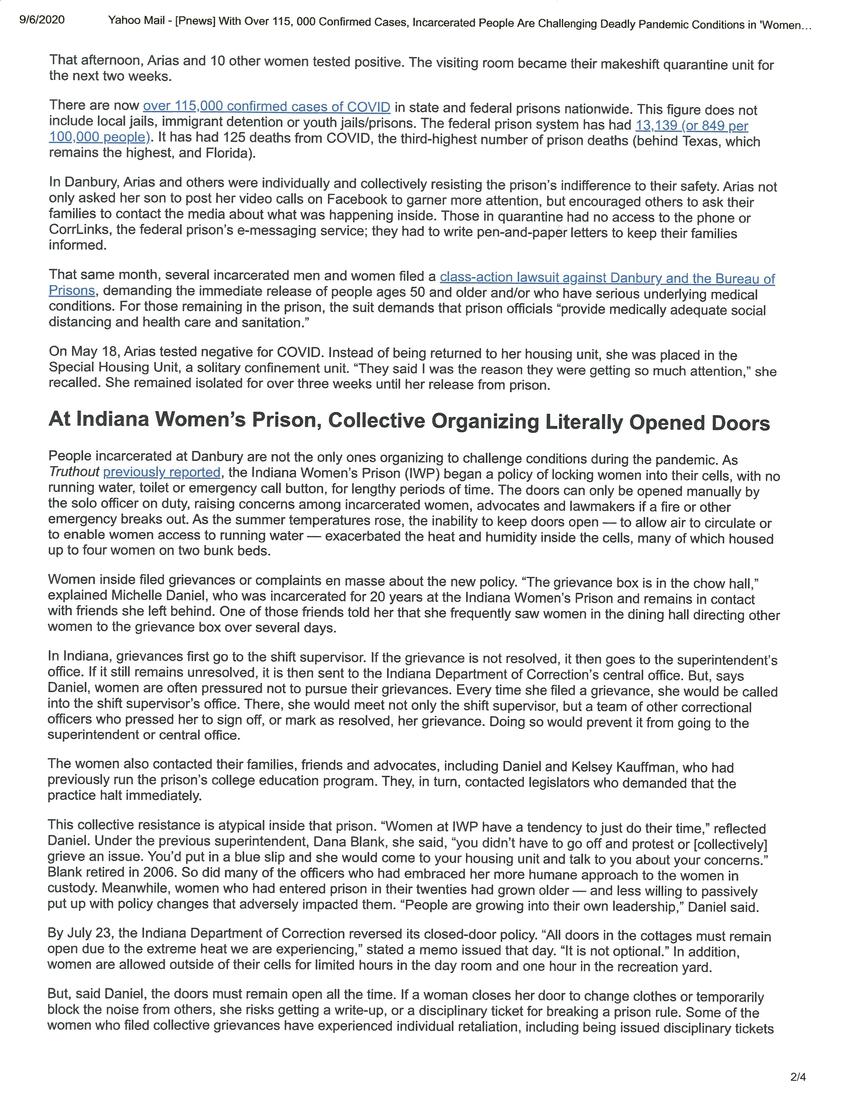 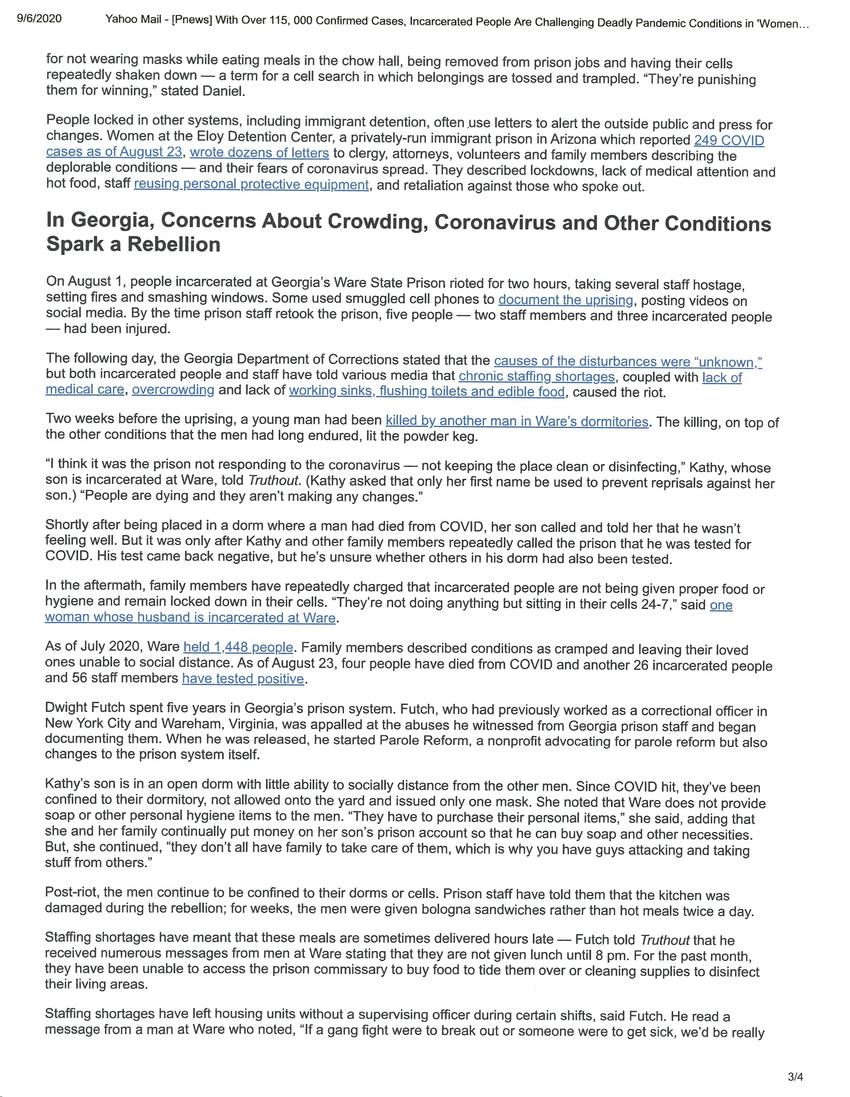 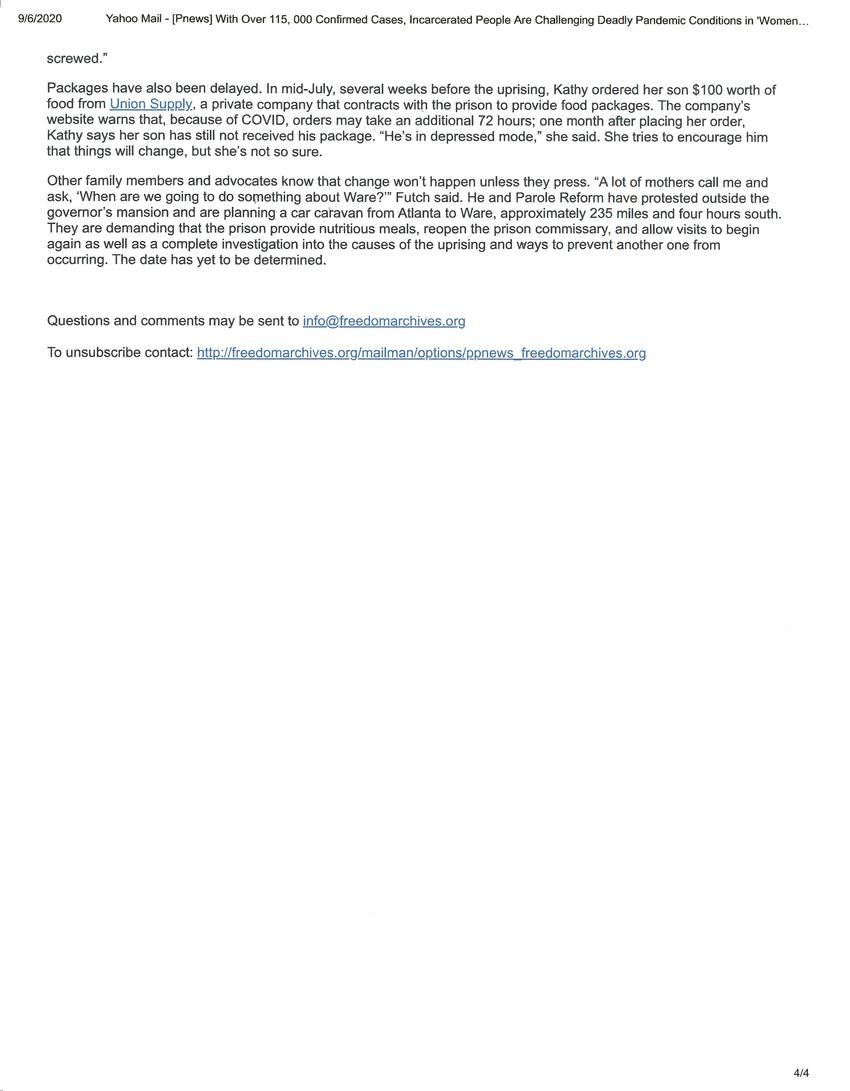 On April 10, Esther Arias made a video call to her son and asked him to stream the call on Facebook Live.

Arias wanted the larger public to know about how the federal prison in Danbury, Connecticut, was handling COVID. One woman, she said, had tested positive three times-but remained in a housing unit. Four other women had been placed in quarantine, then onto her housing unit, she said.

In March, Attorney General William Barr had ordered the Bureau of Prisons, which operates the federal prison system, to expand the early release of prisoners classified as low-risk to home confinement. But, Arias told her son, Danbury officials were "only picking the inmates that already have a [release] date." That left herself and many other women, all of whom had already been classified as low-risk for recidivism, stuck in crowded dorms desperately hoping to avoid contracting COVID. They began asking their families to call Barr's office and demand their loved ones' release.

Two days later, Arias called her son again. "We really need your help," she pleaded to him and friends on Facebook. She reiterated that the woman who had tested positive three times remained on the housing unit, which she described as "a warehouse with cubicles." The dormitories are divided into cubicles with two bunk beds approximately four feet apart. The dividing wall often does not reach the ceiling, resulting in women on the top bunk sleeping next to the woman on the top bunk in the adjoining cubicle. Each dorm room has 160 to 170 beds and three bathrooms.

"We are being exposed to the virus," Arias stated in the live stream, urging viewers to contact Barr's office and demand more releases to prevent the spread of COVID.

Two weeks later, Arias made a 43-second video call to announce that her bunkmate had tested positive and been hospitalized. "Right now, they're taking about 30-something people to the kitchen because there's no place to quarantine," she said. "Please, whoever can help us...help us," she pleaded.

That day Arias later told Truthout, her bunkmate had been extremely sick. Arias and others repeatedly asked the lieutenant on duty to call an ambulance. When the lieutenant refused, Marius Mason, a 58-yer old trans man on the unit, called his attorney to alert her that a woman was being refused medical help. In response, the lieutenant threatened him with a disciplinary ticket for disclosing information about another incarcerated person. (Ultimately, Mason did not receive a ticket, which could have incurred penalties such as solitary confinement and a loss of "privileges" such as phone time and social contact with others in the prison.)

By then, at least 44 incarcerated people and 39 staff members at Danbury had tested positive, at least two incarcerated women had been hospitalized, and one person had died. The incidence rate exceeded 2.8 percent of the prison's population and, at the time, was "among the highest concentrations of positive tests per capita" of any U.S. federal prison, charged a lawsuit filed on behalf of people incarcerated at Danbury. (Danbury incarcerates both men and women in separate facilities.)

That afternoon, Arias and 10 other women tested positive. The visiting room became their makeshift quarantine unit for the next two weeks.

There are now over 115,000 confirmed cases of COVID in state and federal prisons nationwide. The figure does not include local jails, immigrant detention, or youth jails/prisons. The federal system has had 13,139 (or 849 per 100,000 people). It has had 125 deaths from COVID, the third-highest number of prison deaths (behind Texas, which remains the highest, and Florida).

In Danbury, Arias and others are individually and collectively resisting the prison's indifference to their safety. Arias not only asked her son to post her video calls on Facebook to garner more attention but encouraged others to ask their families to contact the media about what was happening inside. Those in quarantine had no access to the phone or CorrLinks, the federal prison's e-messaging service; they had to write pen-and-paper letters to keep their families informed.

That same month, several incarcerated men and women filed a class-action lawsuit against Danbury and the Bureau of Prisons, demanding the immediate release of people ages 50 and older and/or who have serious underlying medical conditions. For those remaining in the prison, the suit demands that prison officials "provide medically adequate social distancing and health care and sanitation."

On May 18, Arias tested negative for COVID. Instead of being returned to her housing unit, she was placed in the Special Housing Unit, a solitary confinement unit. "They said I was the reason they were getting so much attention," she recalled. She remained isolated for over three weeks until her release from prison.

People incarcerated at Danbury are not the only ones organizing to challenge conditions during the pandemic. As Truthout previously reported, the Indiana Women's Prison(IWP) began a policy of locking women into their cells, with no running water, toilet, or emergency call button, for lengthy periods of time. The doors can only be opened manually by the solo officer on duty, raising concerns among incarcerated women, advocates, and lawmakers if a fire or other emergency breaks out. As the summer temperatures rose, the inability to keep doors open — to allow air to circulate or to enable women access to running water — exacerbated the heat and humidity inside the cells, many of which housed up to four women on two bunk beds

Women inside filed grievances or complaints en masse about the new policy. "The grievance box is in the chow hall," explained Michelle Daniel, who was incarcerated for 20 years at the Indiana Women's Prison and remains in contact with friends she left behind. One of those friends told her that she frequently saw women in the dining hall directing other women to the grievance box over several days.

In Indiana, grievances first go to the shift supervisor. If the grievance is not resolved, it then goes to the superintendent's office. If it still remains unresolved, it is then sent to the Indiana Department of Correction's central office. But, says Daniel, women are often pressured not to pursue their grievances. Every time she filed a grievance, she would be called into the shift supervisor's office. There, she would meet not only the shift supervisor, but a team of other correctional officers who pressed her to sign off, of mark as resolved, her grievance. Doing so would prevent it from going to the superintendent or central office.

The women also contacted their families, friends and advocates, including Daniel and Kelsey Kauffman, who had previously run the prison's college education program. They, in turn, contacted legislators who demanded that the practice halt immediately.

This collective resistance is atypical inside that prison. "Women at IWP have a tendency to just do their time," reflected Daniel. Under the previous superintendent, Dana Clank, she said, "you didn't have to go off and protest or [collectively] grieve an issue. You'd put in a blue slip and she would come to your housing unit and talk to you about your concerns." Blank retired in 2006. So did many of the officers who embraced her more humane approach to the women in custody. Meanwhile, women who had entered prison in their twenties had grown older- and less willing to passively put up with policy changes that adversely impacted them. "People are growing into their own leadership," Daniel said.

By July 23, the Indiana Department of Correction reversed it's closed-door policy. "All doors in the cottages must remain open due to the extreme heat we are experiencing," stated a memo issued that day. "It is not optional." In addition, women are allowed outside of their cells for limited hours in the day room and one hour in the recreation yard.

But, said Daniel, the doors must remain open all the time. If a woman closes her door to change clothes or temporarily block the noise from others, she risks getting a write-up, or a disciplinary ticket for breaking a prison rule. Some of the women who filed collective grievances have experienced individual retaliation, including being issued disciplinary tickets for not wearing masks while eating meals in the chow hall, being removed from prison jobs and having their cells repeatedly shaken down- a term for a cell search in which belongings are tossed and trampled. "They're punishing them for winning," stated Daniel.

People locked in other systems, including immigrant detention, often use letter to alert the outside public and press for changes. Women at the Eloy Detention Center, a privately-run immigrant prison in Arizona which reported 249 COVID cases as of August 23, wrote dozens of letters to clergy, attorneys, volunteers and family members describing the deplorable conditions- and their fears of coronavirus spread. They described lockdowns, lack of medical attention and hot food, staff reusing personal protective equipment, and retaliation against those who spoke out.

In Georgia, Concerns About Crowding, Coronavirus and Other Conditions Spark A Rebellion

Stay safe and healthy.
Thanks for writing! I worked on the transcription for your post.