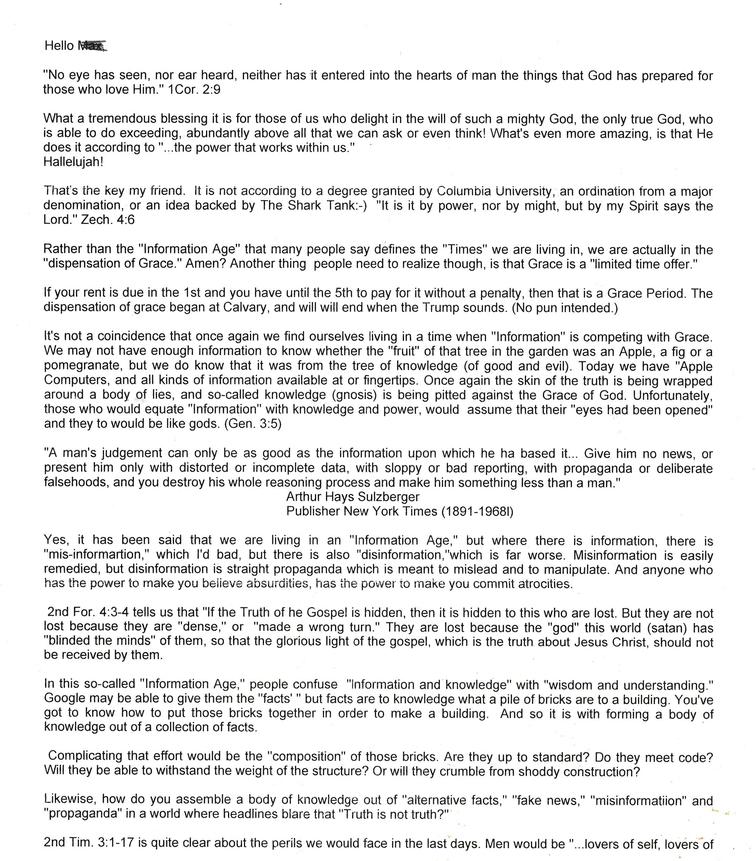 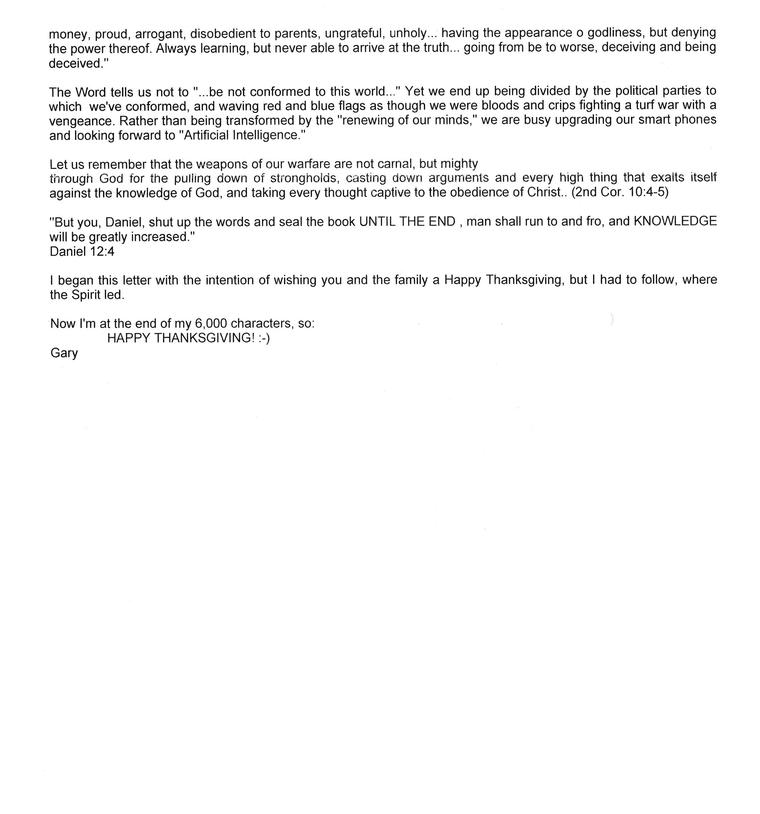 "No eye has seen, nor ear heard, neither has it entered into the hearts of man the things that God has prepared for
those who love Him." 1Cor. 2:9

What a tremendous blessing it is for those of us who delight in the will of such of such a might God, the only the God, who
is able to the exceeding, abundantly above all that we can ask or even think! What's even more amazing, its the He
does it according to "...the power that works within us."
Hallelujah!

That's the key my friend. It is not according to according to a degree granted by Colombia University, an an ordination from a major
denomination, or an idea backed by The Shark Tank:-) "It is it by power, nor by might, but by my Spirit says the
Lord" Zech. 4:6

Rather than the "Information Age" that many people say defines the "Times" new are living in, we are actually in the
"dispensation of Grace" Amen? Another thing people need to realize though, is that Grace is a "limited time offer."

If your rent is due in the 1st and you have until the 5th to pay for it without a penalty, then that is a Grace Period. The
dispensation of grace began at Calvary, and will will end when the Trump sounds. (No pun intended.)

It's not a coincidence that once again we find ourselves living in a time when "Information" is competing with Grace. We may not have enough information to know whether the "fruit" of that tree in the garden was an Apple, a fig or a pomegranate, but we do know that it was from the tree of knowledge (of good and evil). Today we have "apple Computers and all kinds of information available at or fingertips. Once again the skin of the truth is being is being wrapped around a body of lies, and so-called knowledge (gnosis) is being pitted against the Grace of God. Unfortunately, those who would equate "Information" with knowledge and power, would assume that their "eyes had been opened" and they to would be like gods. (Gen. 3:5)

"A man's judgement can only be as good as the information upon which he ha based it... Give him no news, or present him only with distorted or incomplete data, with sloppy or bad reporting, with propaganda or deliberate falsehoods, and you destroy his whole reasoning process and make him something less than a man."
Arthur Hays Sulzberger
Publisher New York Times (1891-1968l)
Yes, it has been said that we are living in an "Information Age," but where there is information, there is "mis-information," which I'd bad, but there is also "disinformation," which is far worse. Misinformation is easily remedied, but disinformation is straight propaganda which is meant to mislead and to manipulate. And anyone who has the power to make you believe absurdities, has the power to make you commit atrocities.

2nd For. 4:3-4 tell us that "If the Truth of he Gospel is hidden, then it is hidden to this who are lost. But they are not lost because they are "dense," or "made a wrong turn" They are lost because the "god" this world (satan) has "blinded the minds" of them, so that the glorious light of the gospel, which is the truth about Jesus Christ, should not be received by them.

In this so-called "Information Age," please confuse "Information and knowledge" with "wisdom and understanding." Google may be able to give them the "facts' "but facts are to knowledge what a pile of bricks are to a building. You've got to know how to put those bricks together in order to make a building. And so it is with forming a body of knowledge out of a collection of facts.

Complicating that efforts would be the "composition" of those bricks. Are they up to standard? Do they meet code? Will they be able to withstand the weight of the structure? Or will they crumble from shoddy construction?

Likewise, how do you assemble a body of knowledge out "alternative facts," "fake news," "misinformation" and "propaganda" in a world where headlines blare that "Truth is not truth?"

2nd Tim, 3:1-17 is quite clear about the perils we would face in the last days. Men would "...lovers of self, lovers of money, proud, arrogant, disobedient to parents, ungrateful, unholy... having the appearance o godliness, but denying the power thereof. Always learning, but never able to arrive at the truth... going from be to worse, deceiving and being deceived."

The Word tells us not to "...be not conformed to this world..." Yet we end up being divided by the political parties to which we've conformed, and waving red and blue flags as though we were bloods and crips fighting a turf war with a vengeance. Rather than being transformed by the "renewing of our minds," we are busy upgrading our smart phones and looking forward to "artificial Intelligence."

Let us remember that the weapons of our warfare are not carnal, but mighty
through God for the pulling down of strongholds, casting down arguments and every high thing that exalts itself
against the knowledge of God, and taking every thought captive to the obedience of Christ.. (2nd Cor. 10:4-5)

"But you, Daniel, shut up the words and seal the book UNTIL THE END, man shall run to and fro, and KNOWLEDGE
will be greatly increased."
Daniel 12:4

I began this letter with the intention of wishing you and the family a Happy Thanksgiving, but I had to follow, where the Spirit led.