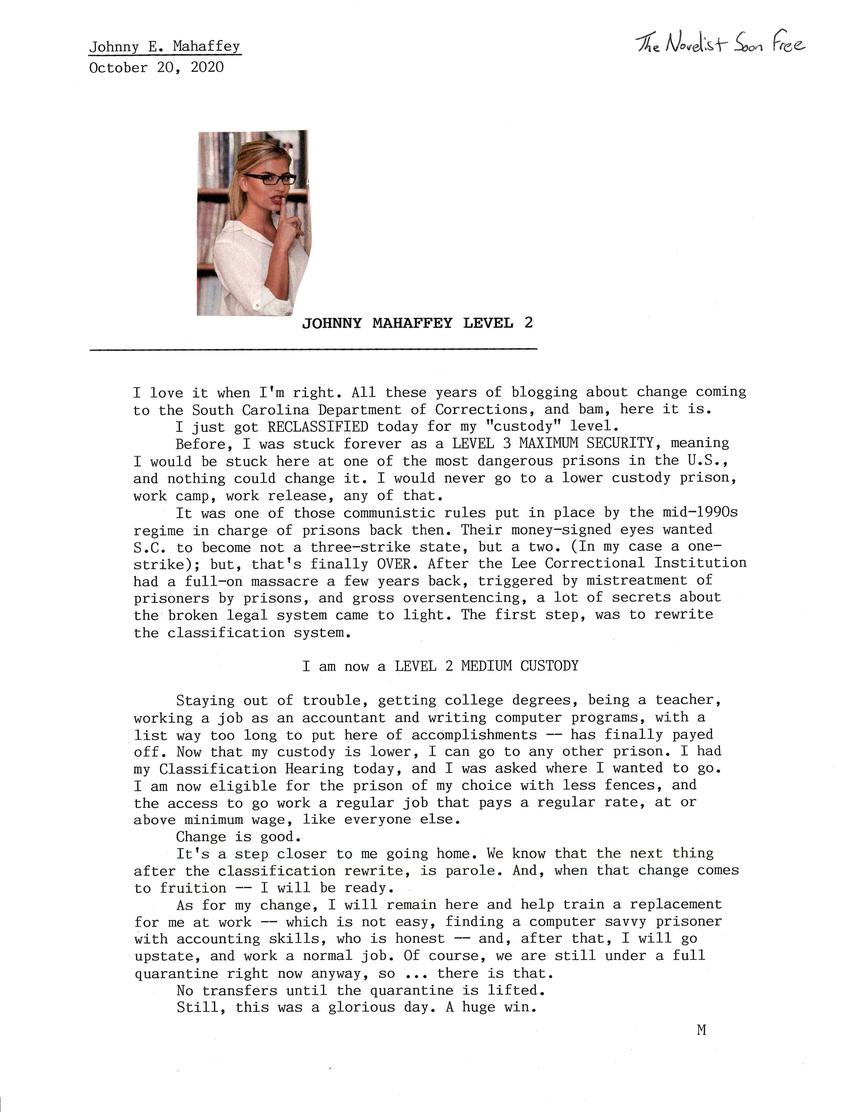 I love it when I'm right. All these years of blogging about change coming to the South Carolina Department of Corrections, and bam, here it is.
I just got RECLASSIFIED today for my "custody" level.
Before, I was stuck forever as a LEVEL 3 MAXIMUM SECURITY, meaning
I would be stuck here at one of the most dangerous prisions in the U.S. ,
and nothing could change it. I would never go to a lower custody prison,
work camp, work release, any of that.
It was one of those communistic rules put in place by the mid-1990s
regime in charge of prisons back then. Their money-signed eyes wanted
S.C. to become not a three-strike state, but a two. ( In my case a one-
strike) ; but, that's finally OVER. After the Lee Correctional Institution
had a full-on massacre a few years back, triggered by mistreatment of
prisoners by prisons, and gross oversentancing, a lot of secrets about
the broke legal system came to light. The first step, was to rewrite
the classification system.

I am a now LEVEL 2 MEDIUM CUSTODY
Staying out of trouble, getting college degrees, being a teacher,
working a job as an accountant and writing computer programs, with a
list way too long to put here of accomplishments -- has finally payed
off. Now that my custody is lower, I can go to any other prison. I had
I am now eligible for the prison of my choice with less fences, and
the access to go work a regular job that pays a regular rate, at or
above minimum wage, like everyone else.
Change is good.
It's a step closer to me going home. We know that the next thing
after the classification rewrite, is parole. And, when that change comes
to fruition--I will be ready.
As for my chang, I will remain here and help train a replacement
for me at work--which is not easy finding a computer savvy prisoner
with accounting skills,who is honest--and, after that, I will go
upstate and work a normal job. Of course, we are still under a full
quarantine right now anyway, so... there is that.
No transfers until the quarantine is lifted.
Still, this was a glorious day. A huge win.