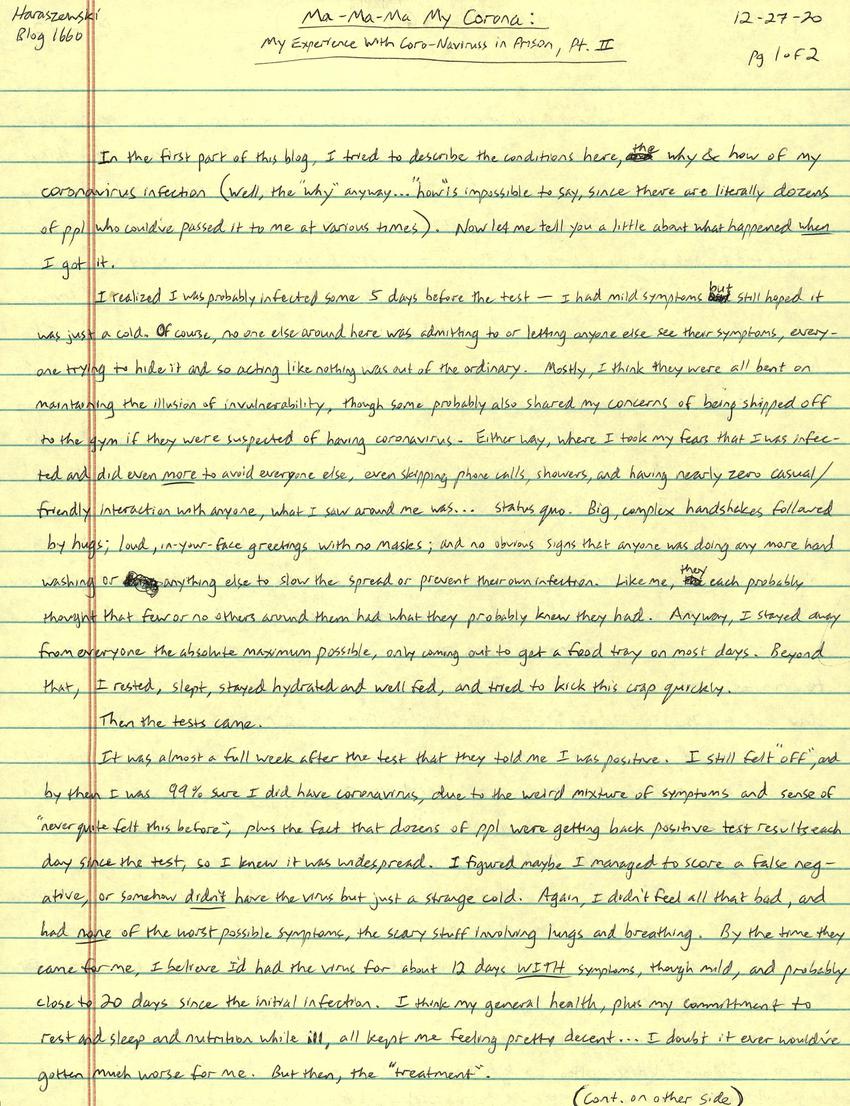 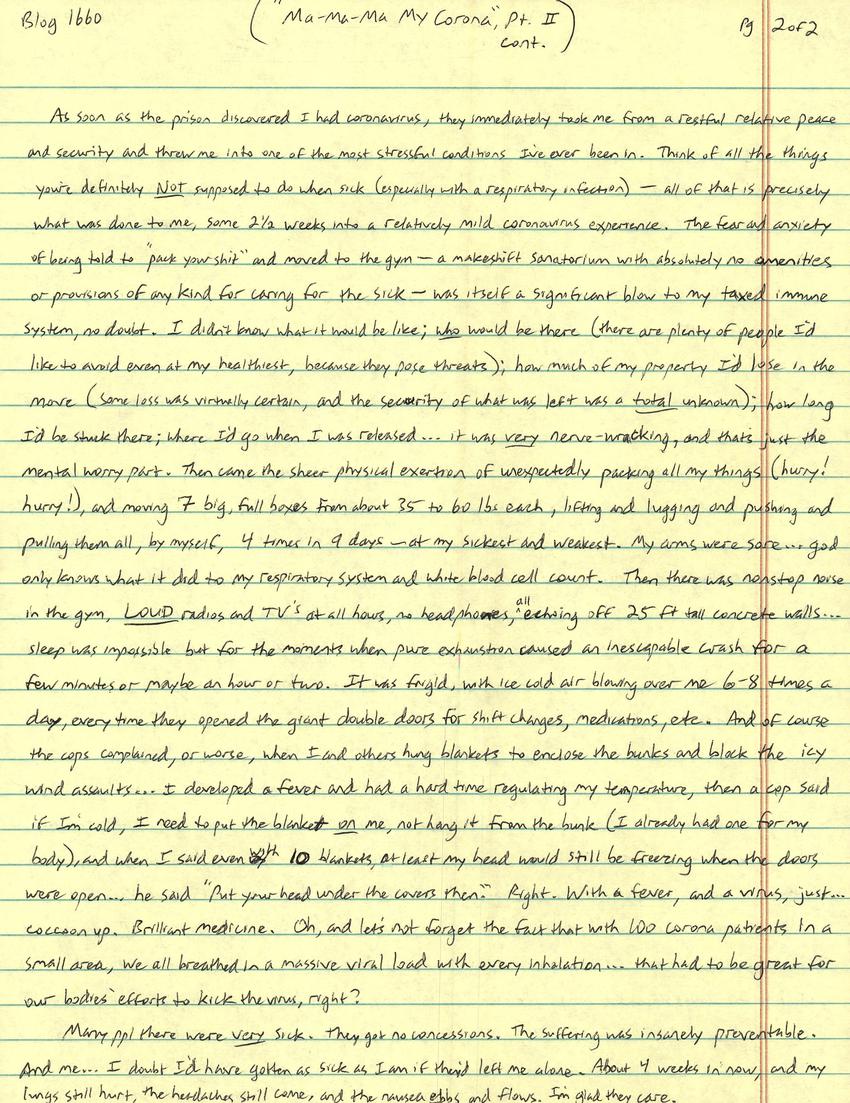 Haraszenski
Blog 1660
Ma-Ma-Ma My Corona:
My Experience with Coro-Naviruss in Prison, Pt. II

In the first part of this blog, I tried to describe the conditions here, the why and how of my coronavirus infection (well, the "why" anyway... "how" is impossible to say, since there are literally dozens of ppl who could've passed it to me at various times). Now let me tell you a little about what happened when I got it.

I realized I was probably infected some 5 days before the test- I had mild symptoms but still hoped it was just a cold. Of course, no one else around here was admitting to or letting anyone else see their symptoms, everyone trying to hide it and so acting like nothing was out of the ordinary. Mostly, I think they were all bent on maintaining the illusion of invulnerability, though some probably also shared my concerns of being shipped off to the gym if they were suspected of having coronavirus. Either way, where I took my fears that I was infected and did more to avoid everyone else, even skipping phone calls, showers, and having nearly zero casual/friendly interaction with anyone, what I saw around me was... status quo. Big, complex handshakes followed by hugs; loud, in-your-face greetings with no masks; and no obvious signs that anyone was doing any more hand washing or anything else to slow the spread or prevent their own infection. Like me, they each probably thought that few or no others around them had what they probably knew they had. Anyway, I stayed away from everyone the absolute maximum possible, only coming out to get a food tray on most days. Beyond that, I rested, slept, stayed hydrated and well fed, and tried to kick this crap quickly.
Then the tests came.
It was almost a full week after the test that they told me I was positive. I still felt "off, and by then I was 99% sure I did have coronavirus, due to the weird mixture of symptoms and sense of "never quite felt this before", plus the fact that dozens of ppl were getting back positive test results each day since the test, so I knew it was widespread. I figured maybe I managed to score a false negative, or somehow didn't have the virus but just a strange cold. Again, I didn't feel all that bad, and had none of the worst possible symptoms, the scary stuff involving lungs and breathing. By the time they came for me, I believe I'd had the virus for about 12 days WITH symptoms, though mild, and probably close to 20 days since the initial infection. I think my general health, plus my commitment to rest and sleep and nutrition while ill, all kept me feeling pretty decent... I doubt it ever would've gotten much worse for me. But then, the "treatment".
As soon as the prison discovered I had coronavirus, they immediately took me from a restful relative peace and security and threw me into one of the most stressful conditions I've ever been in. Think of all the thigns you're definitely NOT supposed to do when sick (especially with a respiratory infection) - all of that is precisely what was done to me, some 2 1/2 weeks into a relatively mild coronavirus experience. The fear and anxiety of being told to "pack your shit" and moved to the gym - a makeshift sanatorium with absolutely no amenities or provisions of any kind for caring for the sick - was itself a significant blow to my taxed immune system, no doubt. I didn't know what it would be like; who would be there (there are plenty of people I'd like to avoid even at my healthiest because they pose threats); how much of my property I'd lose in the move (same loss was virtually certain, and the security of what was left was a total unknown); how long I'd be stuck there; where I'd go when I was released... it was ver nerve-wracking, and that's just the mental worry part. Then came the sheer physical exertion of unexpectedly packing all my things (hurry! hurry!) and moving 7 big, full boxes from about 35 to60 lbs each, lifting and lugging and ushing and pulling them all, by myself, 4 times in 9 days - at my sickest and weakest. My arms were sore... god only knows what it did to my respiratory system ad white blood cell count. Then there was nonstop noise in the gym, LOUD radios and TVs at all hours, no headphones, all echoing off 25 ft tall concrete walls... sleep was impossible but for the moments when pure exhaustion caused an inescapable crash for a few minutes or maybe an hour or two. It was frigid, with ice cold air blowing over me 6-8 times a day, every time they opened the giant double doors for shift changes, medications, etc. And of course, the cops complained, or worse, when I and others hung blankets to enclose the bunks and block the icy wind assaults... I developed a fever and had a hard time regulating my temperature, then a cop said if I'm cold, I need to put the blanket on me, not hang it from the bunk (I already had one for my body), and when I said even with 10 blankets, at least my head would still be freezing when the doors were open... he said "Put your head under the covers then." Right. With a fever, and a virus, just... cocoon up. Brilliant medicine. Oh, and let's not forget the fact that with 100 corona patients in a small area, we all breathed in a massive viral load with every inhalation... that had to be great for our bodies' efforts to kick the virus, right?
Many ppl there were very sick. They got no concessions. The suffering was insanely preventable. and me... I doubt I'd have gotten as sick as I am if they'd left me alone. About 4 weeks in now, and my lungs still hurt, the headaches still come, and the nausea ebbs ad flows. I'm glad they care.