Really? Right up their noses? 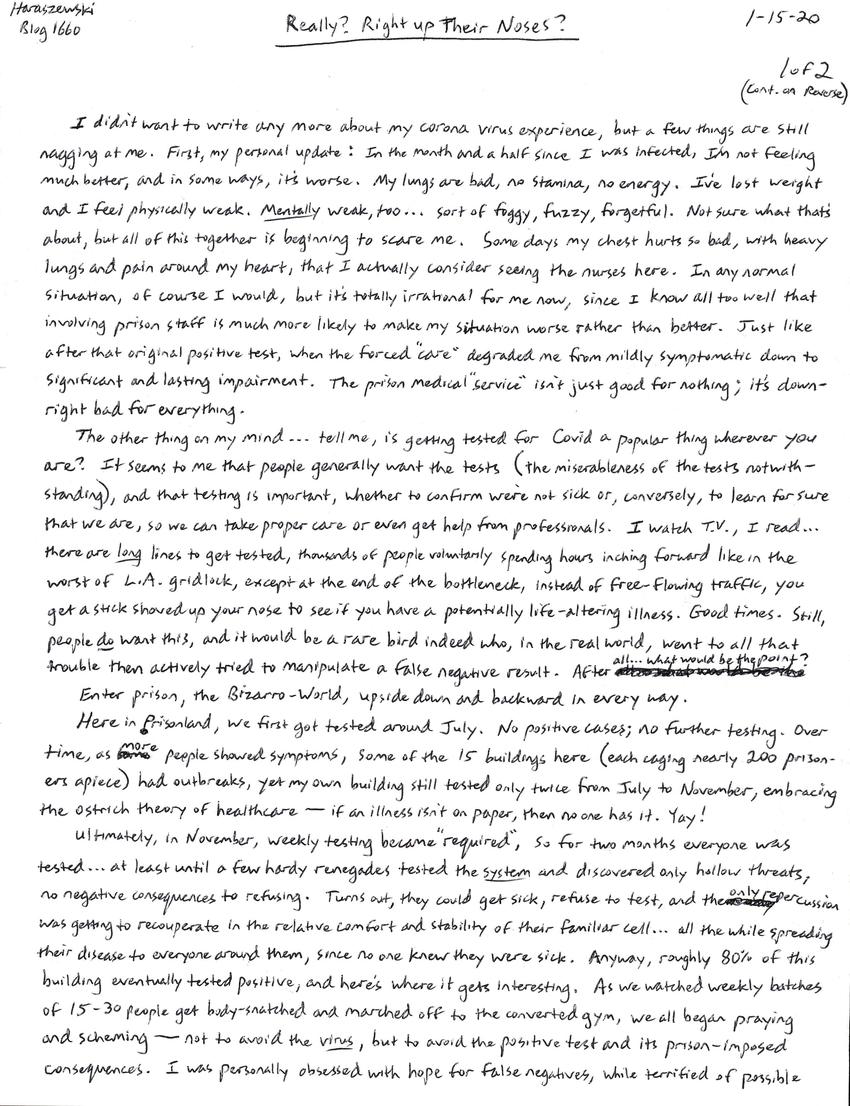 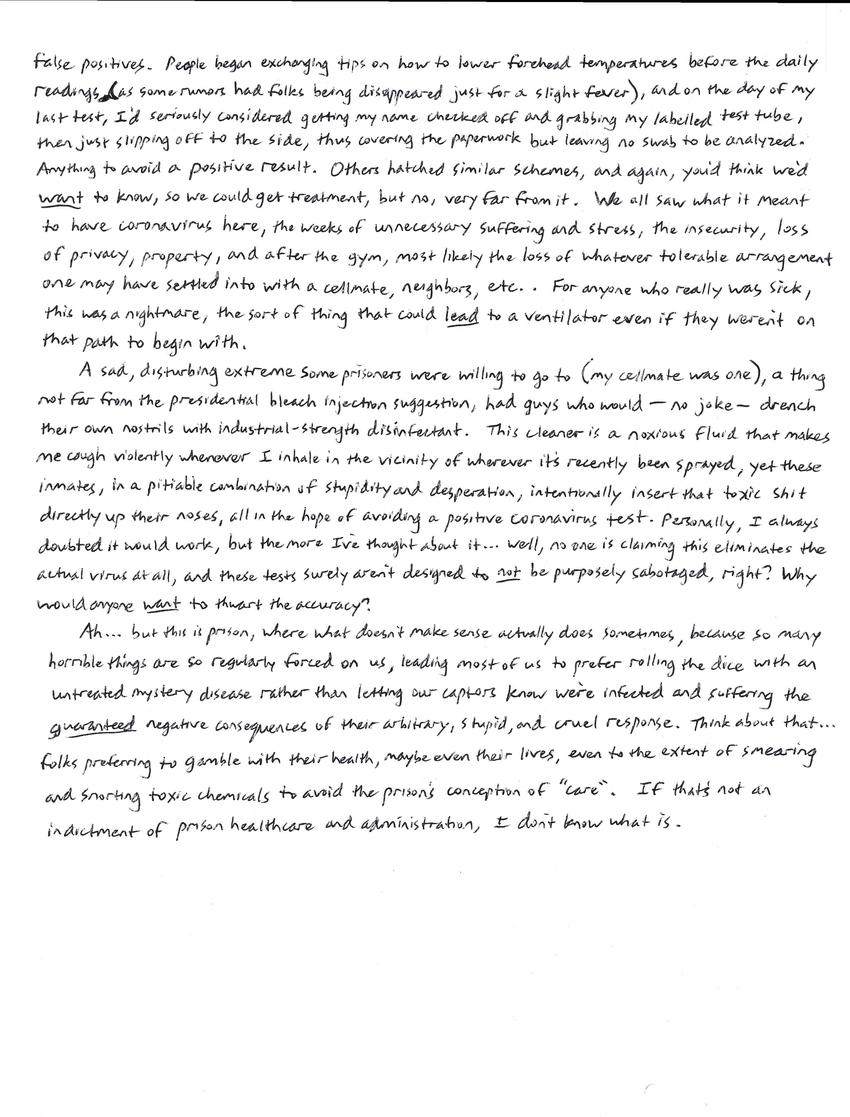 Really? Right Up Their Noses?
I didn't want to write any more about my corona virus experience, but a few things are still nagging at me. First, my personal update: In the month and a half since I was infected, I'm not feeling much better, and in some ways, it's worse. My lungs are bad, no stamina, no energy. I've lost weight and I feel physically weak. Mentally weak, too... sort of foggy, fuzzy, forgetful. Not sure what that's about but all of this together is beginning to scare me. Some days my chest hurts so bad, with heavy lungs and pain around my heart, that I actually consider seeing the nurses here. In any normal situation, of course I would, but it's totally irrational for me now, since I know all too well that involving prison staff is much more likely to make my situation worse rather than better. Just like after that original positive test, when the forced "care" degraded me from mildly symptomatic down to significant and lasting impairment. The prison medical "service" isn't just good for nothing; it's down-right bad for everything.
The other thing on my mind...tell me, is getting tested for Covid a popular thing wherever you are? It seems to me that people generally want the tests (the miserableness of the tests notwithstanding), and that testing is important, whether to confirm we're not sick or, conversely, to learn for sure that we are, so we can take proper care or even get help from professionals. I watch T.V., I read... there are long lines to get tested, thousands of people voluntarily spending hours inching forward like in the worst of L.A. gridlock, except at the end of the bottleneck, instead of free-flowing traffic, you get a stick shoved up your nose to see if you have a potentially life-altering illness. Good times. Still, people do want this, and it would be a rare bird indeed who, in the real world, went to all that trouble then actively tried to manipulate a false negative result. After all...what would be the point?
Enter prison, the Bizarro-World, upside down and backward in every way.
Here in Prisonland, we first got tested around July. No positive cases; no further testing. Over time, as more people showed symptoms, some of the 15 buildings here (each caging nearly 200 prisoners apiece) had outbreaks, yet my own building still tested only twice from July to November, embracing the ostrich theory of healthcare -- if an illness isn't on paper, then no one has it. Yay!
Ultimately, in November, weekly testing became "required", so for two months everyone was tested...at least until a few hardy renegades tested the system and discovered only hollow threats, no negative consequences to refusing. Turns out, they could get sick, refuse to test, and the only repercussion was getting to recuperate in the relative comfort and stability of their familiar cell...all the while spreading their disease to everyone around them, since no one knew they were sick. Anyway, roughly 80% of this building eventually tested positive, and here's where it gets interesting. As we watched weekly batches of 15-30 people get body-snatched and marched off to the converted gym, we all began praying and scheming -- not to avoid the virus, but to avoid the positive tests and its prison-imposed consequences. I was personally obsessed with hope for false negatives, while terrified of possible false positives. People began exchanging tips on how to lower forehead temperatures before the daily reading (as some rumors had folks being disappeared just for a slight fever), and on the day of my last test, I'd seriously considered getting my name checked off and grabbing my labelled test tube, then just slipping off to the side, thus covering the paperwork but leaving no swap to be analyzed. Anything to avoid a positive result. Others hatched similar schemes, and again, you'd think we'd want to know, so we could get treatment, but no, very far from it. We all saw what it meant to have coronavirus here, the weeks of unnecessary suffering and stress, the insecurity, loss of privacy, property, and after the gym, most likely the loss of whatever tolerable arrangement one may have settled into with a cellmate, neighbors, etc.. For anyone who was really sick, this was a nightmare, the sort of thing that could lead to a ventilator even if they weren't on that path to begin with.
A sad, disturbing extreme some prisoners were willing to go to (my cellmate was one), a thing not far from the presidential bleach suggestion, had guys who would --no joke-- drench their own nostrils with industrial-strength disinfectant. This cleaner is a noxious fluid that makes me cough violently whenever I inhale in the vicinity of wherever it's recently been sprayed, yet these inmates, in a pitiable combination of stupidity and desperation, intentionally insert that toxic ___ directly up their noses, all in the hope of avoiding a positive coronavirus test. Personally, I always doubted it would work, but the more I've though about it...well, no one is claiming this eliminates the actual virus at all, and these tests surely aren't designed to not be purposely sabotaged, right? Why would anyone want to thwart the accuracy?Ah...but this is prison, where what doesn't make sense actually does sometimes, because so many horrible things are so regularly forced on us, leading most of us to prefer rolling the dice with an untreated mystery disease rather than letting our captors know we're infected and suffering the guaranteed negative consequences of their arbitrary, stupid, and cruel response. Think about that...folks preferring to gamble with their health, maybe even their lives, even to the extent of smearing and snorting toxic chemicals to avoid the prison's concept of "care". If that's not an indictment of prison healthcare and administration, I don't know what is.

Thanks for writing! I worked on the transcription for your post and found this perspective to be really enlightening.