I've meant to write about this for a long time, and the blog I wrote last week ("Go to Your Room and Think..."), about my regret for making my terrible cellmate feel bad, brought it strongly back to mind.
We've all felt fear right? We've all been afraid of someone at some time? I don't mean the anxiety of delivering bad news or asking for a favor we may not get, but about truly fearing another person for what they may do to us because we know they can and very well might. I mean the fear of an unpredictable boss who might fire us, or fear of an unstable parent when we're kids. Fear of the Hydra-headed power of a malicious school teacher, and of course fear of police, overall the harm cops can and will do, given the slightest provocation (or even none at all). It's fear of people who hold some power over our bodies or futures, and a fear of bullies in general, whether the type who push and punch, or the more psychological type who hurt us in ways that scar but never leave bruises. I'm sure all this is familiar to just about everyone, as must be the occasional fantasy most of us have indulged, that of causing real fear in others – particularly those who've caused it in us. Power and revenge fantasies... has anyone not had one?
But here is something maybe less familiar, though still pretty common: the feeling of actually causing fear, of recognizing a power we have to make another person genuinely afraid of us. Have you ever truly scared someone else? Thinking back over my life, I can recall... I dunno, maybe 4 times when I've caused fear in another person; fear of me. I've never been much of a menace, rarely ever tried to intimidate anyone, but sometimes, and mostly inadvertently, especially when I've "blown up" in a fit of anger – generally anger at myself, but that hardly matters – I know I've made others feel afraid, wither because I've seen it in them or because they've told me so. Fear is a terrible emotion and one I've felt more than my fair share of, but you know what? It's not worse than the feeling of knowing you've made someone else feel afraid. That is a hard thing to choke down... it's soul-eroding. I don't think I've ever felt as low as when I've realized someone else feared me. It sucks, and you-or I, anyway – feel like a truly shitty person at those moments. Even the one time I don't fully regret, a time in high school when I very much meant to scare a guy who'd been bullying my friend... even then and even though I maybe wouldn't do anything differently now (because I'm not sure I'd know hoe, even assuming a different path was possible), I didn't like the person that doing that made me feel like – I saw a bully in myself more than a protector of others. It was uncomfortable.
You may have scared someone, maybe a sibling or a friend, maybe your kid... how did it make you feel, knowing what you caused inside them? Don't you feel a little... shitty? Now tell me, please – how do so many people make careers out of producing terror in others? How must they feel to know that others are literally afraid to meet them; afraid to even be seen by them? Honeslty, I can't imagine living that way, much less wanting to make a living that way. Ask yourself, in your profession or position, who do you make afraid? Anyone?

Thanks for writing! I finished the transcription for your post. It was very interesting reading your deep dive into the concept of fear. I agree. Fear itself is a very powerful emotion. It can be used as an advantage or inadvertently against others. Either way, I think that the feeling you were describing after causing fear in others is what makes us human. I would hope that anyone out there would not get a feel of enjoyment out of causing fear. Maybe that disturbing feeling is what stops it from being a commonly felt/given emotion. Those who spread fear may not show the aftereffect on the outside, but if they are capable of any emotions, I am sure they feel it inside.
Dude you're so amazing!! You're so smart
Iloveyou
(scanned reply – view as blog post)
uploaded April 5, 2021.  Original (PDF) 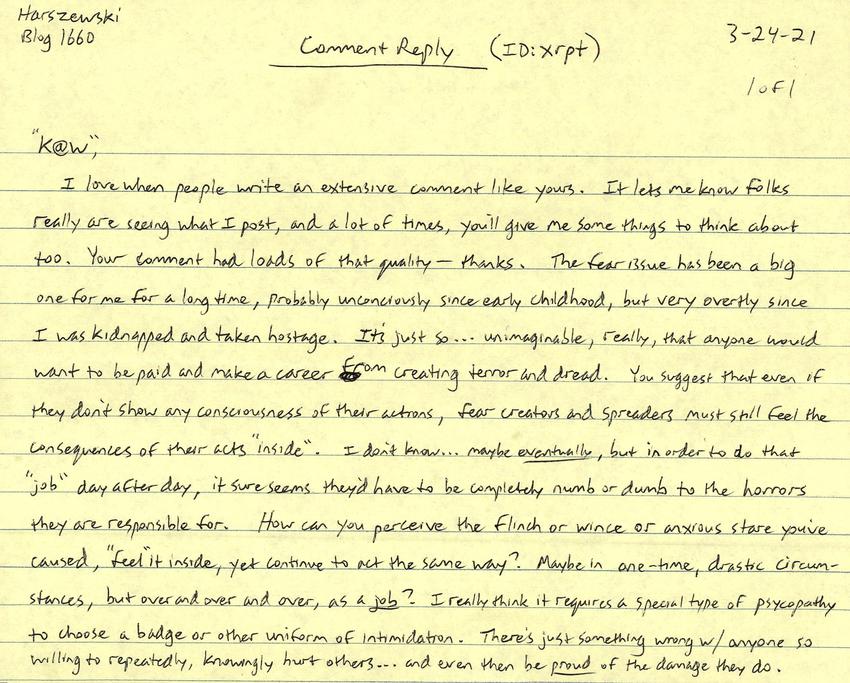