Harm Reduction Is The Solution 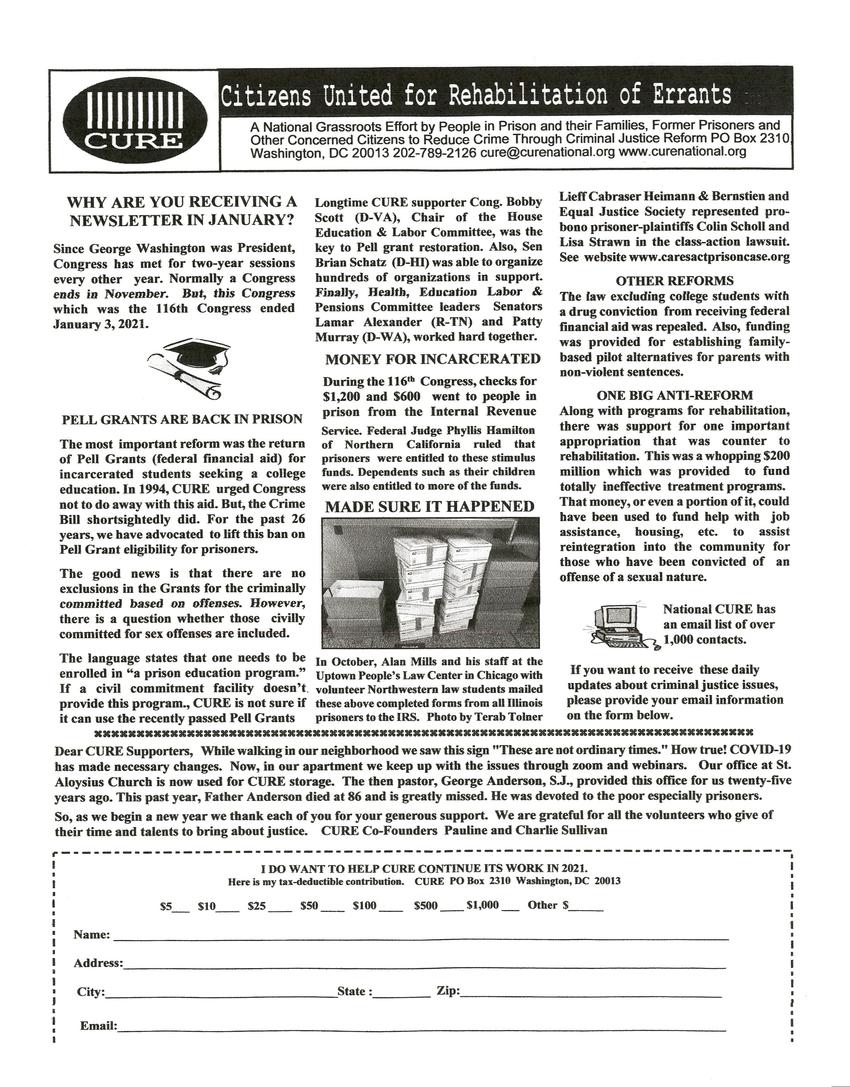 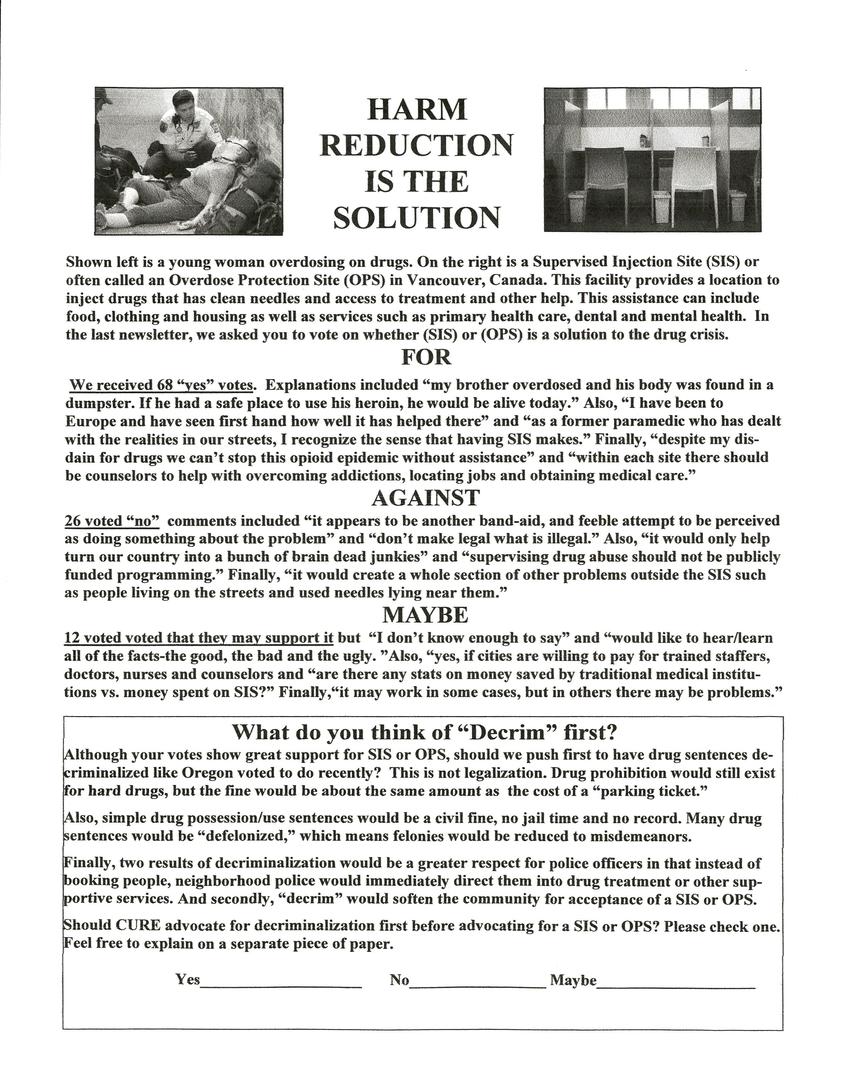 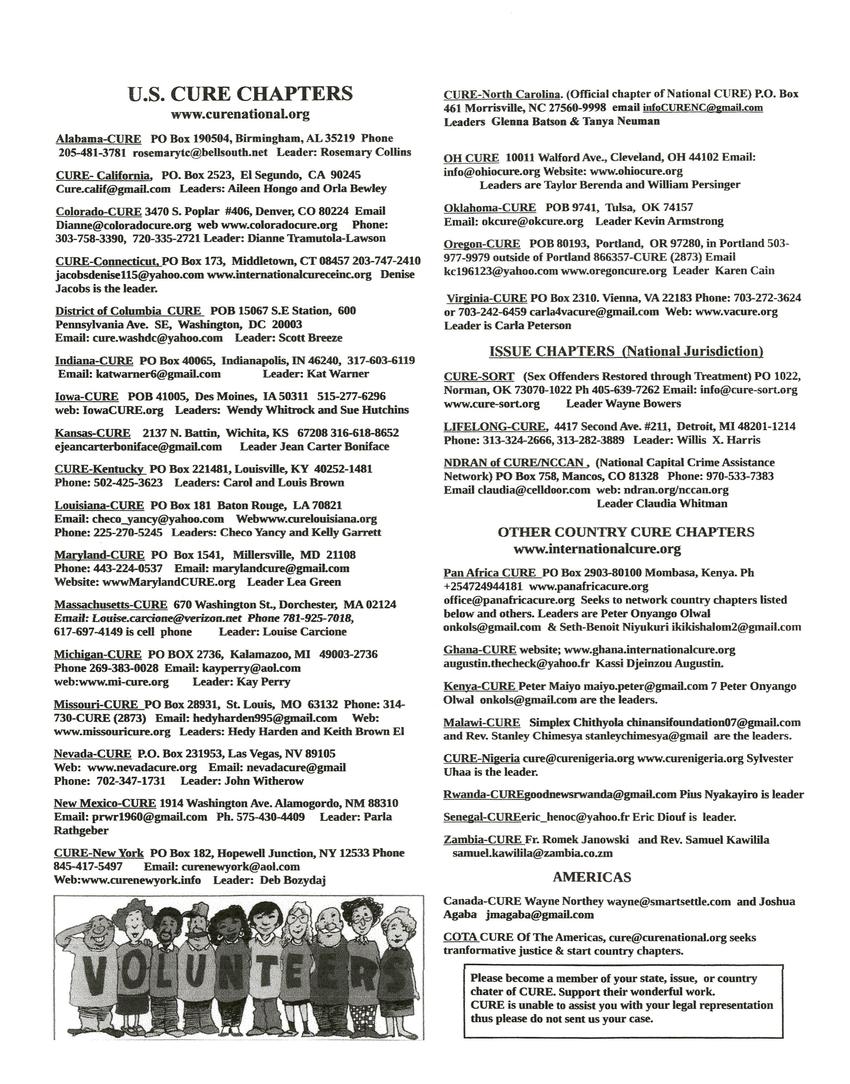 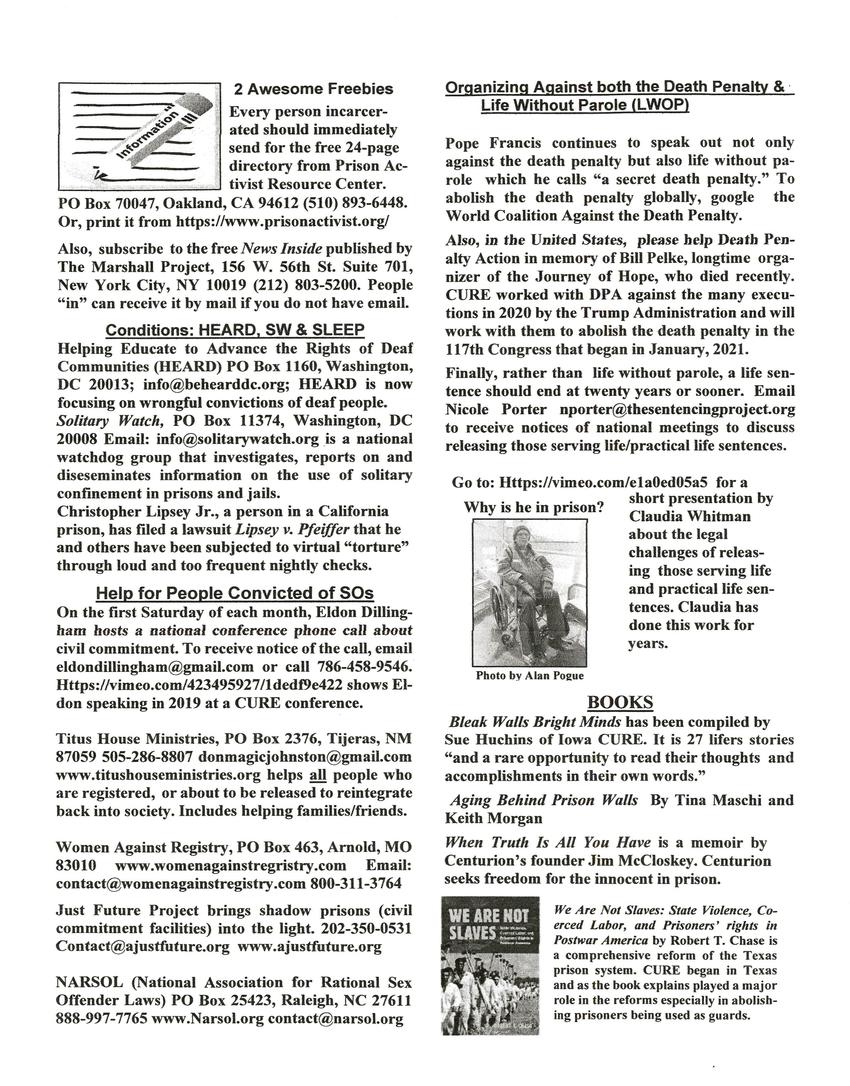 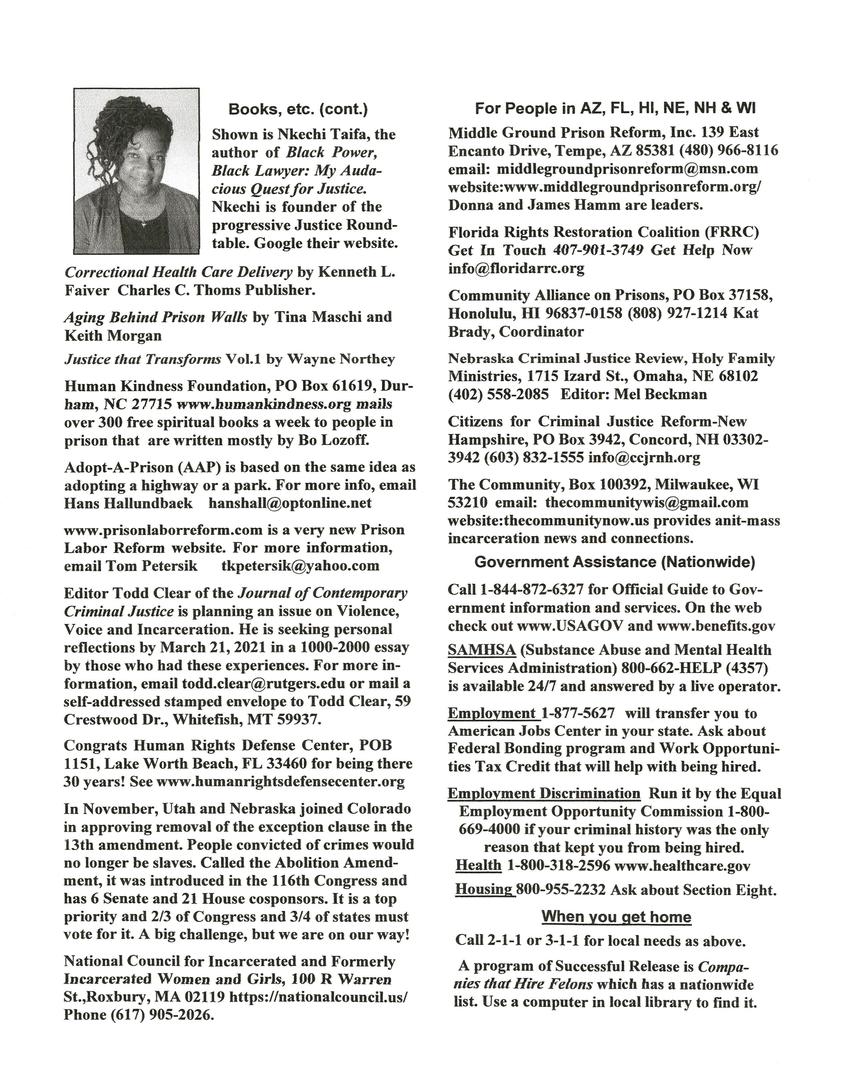 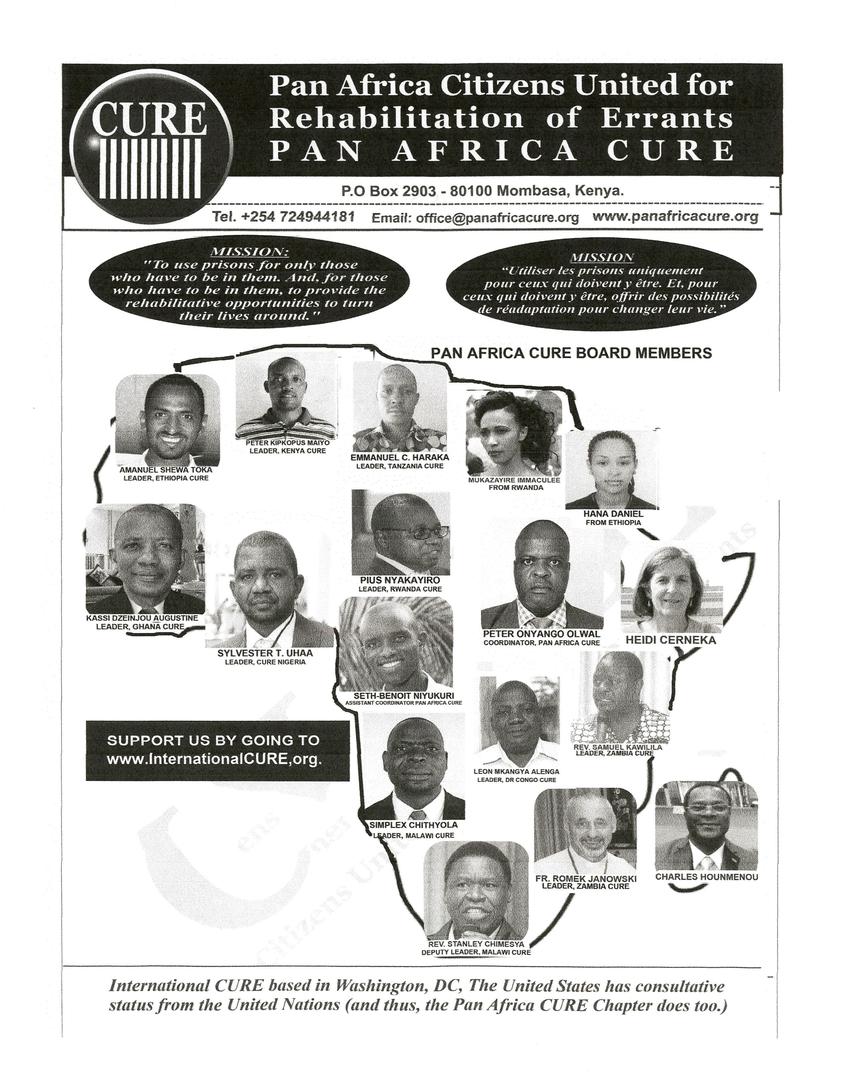 Citizen United for Rehabilitation of Errants

A National Grassroots Effort by People in Prison and their Families, Former Prisoners and Other Concerned Citizens to Reduce Crime Through Criminal Justice Reform PO Box 2310 Washington, DC 20013 202-789-2126 cure@national.org www.curenational.org

WHY ARE YOU RECEIVING A NEWSLETTER IN JANUARY?

Since George Washington was President, Congress has met for two-year sessions every other year, Normally a Congress ends in November. But, this Congress which was the 116th Congress ended January 3, 2021.

PELL GRANTS ARE BACK IN PRISON

The most important reform was the return of Pell Grants (federal financial aid) for incarcerated students seeking a college education. In 1994, CURE urged Congress not to do away with this aid. But, the Crime Bull shortsightedly did. For the past 26 years, we have advocated to lift this ban on Pell Grant eligibility for prisoners.

The Good news is that there are no exclusions in the Grants for the criminally committed based on offenses. However, there is a question whether those civilly committed for sex offenses are included.

The language states that one needs to be enrolled in "a prison education program." If a civil commitment facility doesn't provide this program., CURE is not sure if it can use the recently passed Pell Grants

During the 116th Congress, checks for $1,200 and $600 went to people in prison from the Internal Revenue

Service, Federal Judge Phyllis Hamilton of Northern California ruled that prisoners were entitled to these stimulus funds. Dependents such as their children were also entitled to more of the funds.

MADE SURE IT HAPPENED

In October, Alan Mills and his staff at the Uptown People's Law Center in Chicago with volunteer Northwestern law students mailed these above completed forms from all Illinois prisoners to the IRS. Photo by Terab Tolner

The law excluding college students with a drug conviction from receiving federal financial aid was repealed. Also, funding was provided for establishing family-based pilot alternative for parents with non-violent sentences.

Along with programs for rehabilitation there was support for one important appropriation that was counter to rehabilitation. This was a whopping $200 million which was provided to fund totally ineffective treatment programs. That money, or even a portion of it, could have been used to fund help with job assistance, housing, etc. to assist reintegration into the community for those who have been convicted of an offense of a sexual nature.

National CURE has an email list of over 1,000 contacts. If you want to receive these daily updates about criminal justice issues, please provide your email information on the form below.

Dear CURE Supporters, While walking in our neighborhood we saw this sign "These are not ordinary times." How true! COVID-19 has made necessary changes. Now, in our apartment we keep up with the issues through zoom and webinars, Our office St. Aloyius Church is now used for CURE storage. The then pator, George Anderson, S.J., provided this office for us twenty-five years ago. This past year, Father Anderson died at 86 and is greatly missed. He was devoted to the poor especially prisoners.

So, as we begin a new year we thank each of you for your generous support. We are grateful for all the volunteers who give their time and talent to bring about justice. CURE Co-Founders Pauline and Charlie Sullivan

HARM REDUCTION IS THE SOLUTION
Shown left is a young woman overdosing on drugs. On the right is a Supervised Injection Site (SIS) or often called an Overdose Protection Site (OPS) in Vancouver, Canada. This facility provides a location to inject drugs that has clean needles and access to treatment and other help. This assistance can include food, clothing and housing as well as services such as primary health care, dental and mental health. In the last newsletter, we asked you to vote on whether (SIS) or (OPS) is a solution to the drug crisis.

FOR
We received 68 "yes" votes. Explanations included "my brother overdosed and his body was found in a dumpster. If he had a safe place to use his heroin, he would be alive today." Also, "I have been to Europe and have seen first hand how well it has helped there" and "as a former paramedic who has health with the realities in our streets, I recognize the sense that having SIS makes." Finally, "despite my disdain for drugs for drugs we can't stop this opioid epidemic without assistance" and "within each site there should be counselors to help with overcoming addictions, locating jobs and obtaining medical care."

AGAINST
26 voted "no" comments included "it appears to be another band-aid, and feeble attempt to be perceived as doing something about the problem" and "don't make legal what is illegal." Also, "it would only help turn out country into a bunch of brain dead junkies" and "supervising drug abuse should not be publicly funded programming." Finally, "it would create a whole section of other problems outside the SIS such as people living on the streets and used needles lying near them."

MAYBE
12 voted voted that they may support it but "I don't know enough to say" and "would like to hear/learn all of the facts-the good, the bad and the ugly." Also, "yes, if cities are willing to pay for trained staffers, doctors, nurses and counselors and "are there any stats on money saved by traditional medical institutions vs. money spent on SIS?" Finally, "it may work in some cases, but in others there may be problems."

What do you think of "Decrim" first?
Although your votes show great support for SIS or OPS, should we push first to have drug sentences de-criminalized like Oregon voted to do recently? This is not legalization. Drug prohibition would still exist for hard drugs, but the fine would be about the same amount as the cost of a "parking ticket."

Finally, two results of decriminalization would be a greater respect for police officers in that instead of booking people, neighborhood police would immediately direct them into drug treatment or other supportive services. And secondly, "decrim" would soften the community for acceptance of a SIS or OPS.

Should CURE advocate for decriminalization first before advocating for a SIS or OPS? Please check one. Feel free to explain on a separate piece of paper.