The Tao of the Hamster Wheel 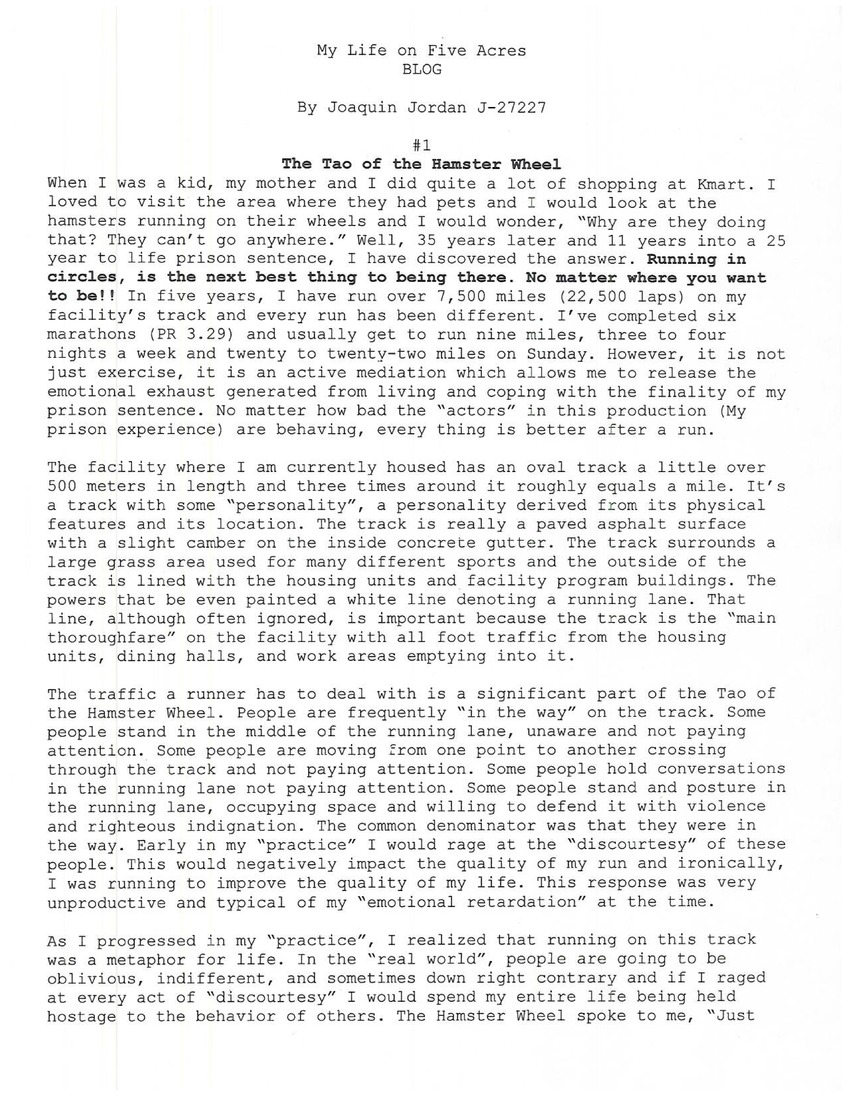 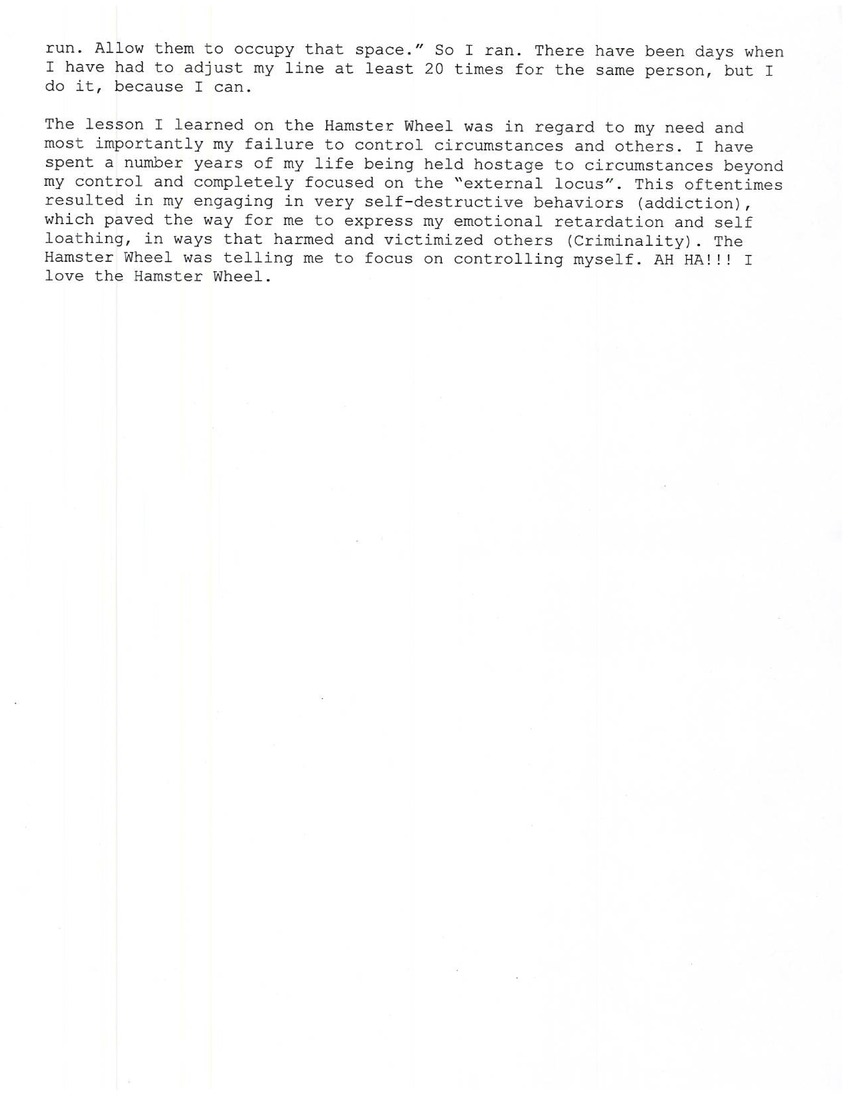 My Life on Five Acres
BLOG

#1
The Tao of the Hamster Wheel
When I was a kid, my mother and I did quite a lot of shopping at Kmart. I loved to visit the area where they had pets and I would look at the hamsters running on their wheels and I would wonder, "Why are they doing that? They can't go anywhere." Well 35 years later and 11 years into a 25 year to life prison sentence, I have discovered the answer. Running in circles, is the next best thing to being there. No matter where you want to be!! In five years, I have run over 7,500 miles (22,500 laps) on my facility's track and every run has been different. I've completed six marathons (PR. 3.29) and usually get to run nine miles, three to four nights a week and twenty to twenty-two miles on Sunday. However, it is not just exercise, it is an active mediation which allows me to release the emotional exhaust generated from living and coping with the finality of my prison sentence. No matter how bad the "actors" in this production (My prison experience) are behaving, every thing is better after a run.

The facility where I am currently housed has an oval track a little over 500 meters in length and three times around it roughly equals a mile. It's a track with some "personality", a personality derived from its physical features and its location. The track is really a paved asphalt surface with a slight camber on the inside concrete gutter. The track surrounds a large grass area used for many different sports and the outside of the track is lined with the housing units and facility program buildings. The powers that be even painted a white line denoting a running lane. That line, although often ignored, is important because the track is the "main thoroughfare" on the facility with all foot traffic from the housing units, dining halls, and work areas emptying into it.

As I progressed in my "practice", I realized that running on this track was a metaphor for life. In the "real world", people are going to be oblivious, indifferent, and sometimes down right contrary and if I raged at every act of "discourtesy" I would spend my entire life being held hostage to the behaviour of others. The Hamster Wheel spoke to me, "Just run. Allow them to occupy that space." So I ran. There have been days when I have had to adjust my line at least 20 times for the same person, but I do it, because I can.

The lesson I learned on the Hamster Wheel was in regard to my need and most importantly my failure to control circumstances and others. I have spent a number years of my life being held hostage to circumstances beyond my control and completely focused on the "external locus". This oftentimes resulted in my engaging in very self-destructive behaviors (addictions), which paved the way for me to express my emotional retardation and self-loathing in ways that harmed and victimized others (criminality). The Hamster Wheel was telling me to focus on controlling myself. AH HA! I love the Hamster Wheel.

Nephew I am proud of your blog and the professionalism presented. I love you so much and I know your dad & grandma Frances would be proud of how you are serving your time. I love the organization you iniated, considering the victims of crime. I often share your ideas with friends and co-workers. I love that you are not playing the "blame game".
God is truly watching over you and always remember His Grace and Mercy. And always know that Auntie Mary loves
you forever. Keep running and keep the faith!!!!
I love the analogy of the hamster wheel. It seems that in learning that you can only control your actions/reactions, and not those of others, that you have been able to achieve some inner peace. I think many people spend their entire lives pushing and raging against what they feel are injustices against them at the hands of others. Once you accept that life isn't "fair" but that you can be happy if you learn to take things in your stride than you can become a "whole" person. Thank you for sharing your experiences here, and keep up all the good work you are doing on the inside, it sounds like you are really giving back to the community you once set out to harm and damage! Best of luck to you!