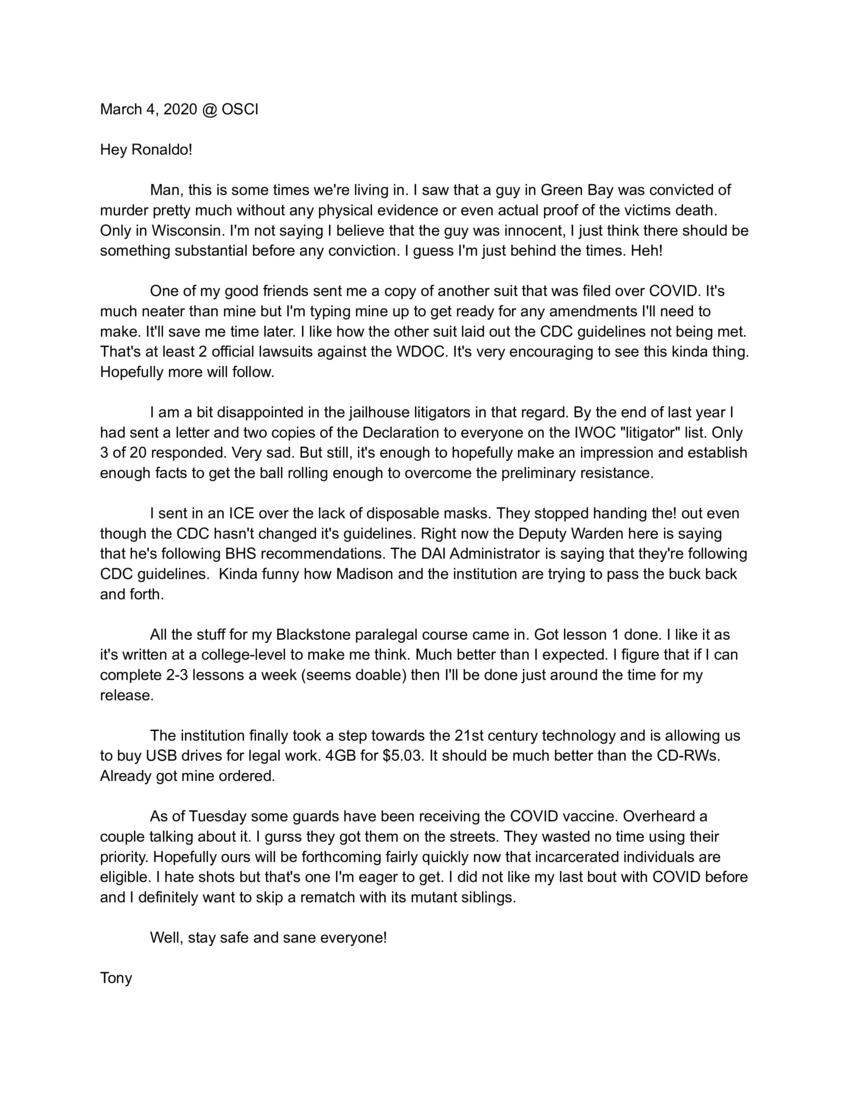 Man, this is some times we're living in. I saw that a guy in Green Bay was convicted of murder pretty much without any physical evidence or even actual proof of the victims death. Only in Wisconsin. I'm not saying I believe that the guy was innocent, I just think there should be something substantial before any conviction. I guess I'm just behind on the times. Heh!

One of my good friends sent me a copy of another suit that was filed over COVID. It's much neater than mine but I'm typing mine up to get ready for any amendments I'll need to make. It'll save me time later. I like how the other suit laid out the CDC guidelines not being met. That's at least 2 official lawsuits against the WDOC. It's very encouraging to see this kinda thing. Hopefully more will follow.

I am a bit disappointed in the jailhouse litigators in that regard. By the end of last year I had sent a letter and two copies of the Declaration to everyone on the IWOC "litigator" list. Only 3 of 20 responded. Very sad. But still, it's enough to hopefully make an impression and establish enough facts to get the ball rolling enough to overcome the preliminary resistance.

I sent in an ICE over the lack of disposable masks. They stopped handing the! out even though the CDC hasn't changed it's guidelines. Right now the Deputy Warden here is saying that he's following BHS recommendations. The DAI Administrator is saying that they're following CDC guidelines. Kinda funny how Madison and the institution are trying to pass the buck back and forth.

All the stuff for my Blackstone paralegal course came in. Got lesson 1 done. I like it as it's written at a college-level to make me think. Much better than I expected. I figure that if I can complete 2-3 lessons a week (seems doable) then I'll be done just around the time for my release.

The institution finally took a step towards the 21st century technology and is allowing us to buy USB drives for legal work. 4GB for $5.03. It should be much better than the CD-RWs. Already got mine ordered.

As of Tuesday some guards have been receiving the COVID vaccine. Overheard a couple talking about it. I guess they got them on the streets. They wasted no time using their priority. Hopefully ours will be forthcoming fairly quickly now that incarcerated individuals are eligible. I hate shots but that's one I'm eager to get. I did not like my last bout with COVID before and I definitely want to skip a rematch with its mutant siblings.

Well, stay safe and sane everyone!