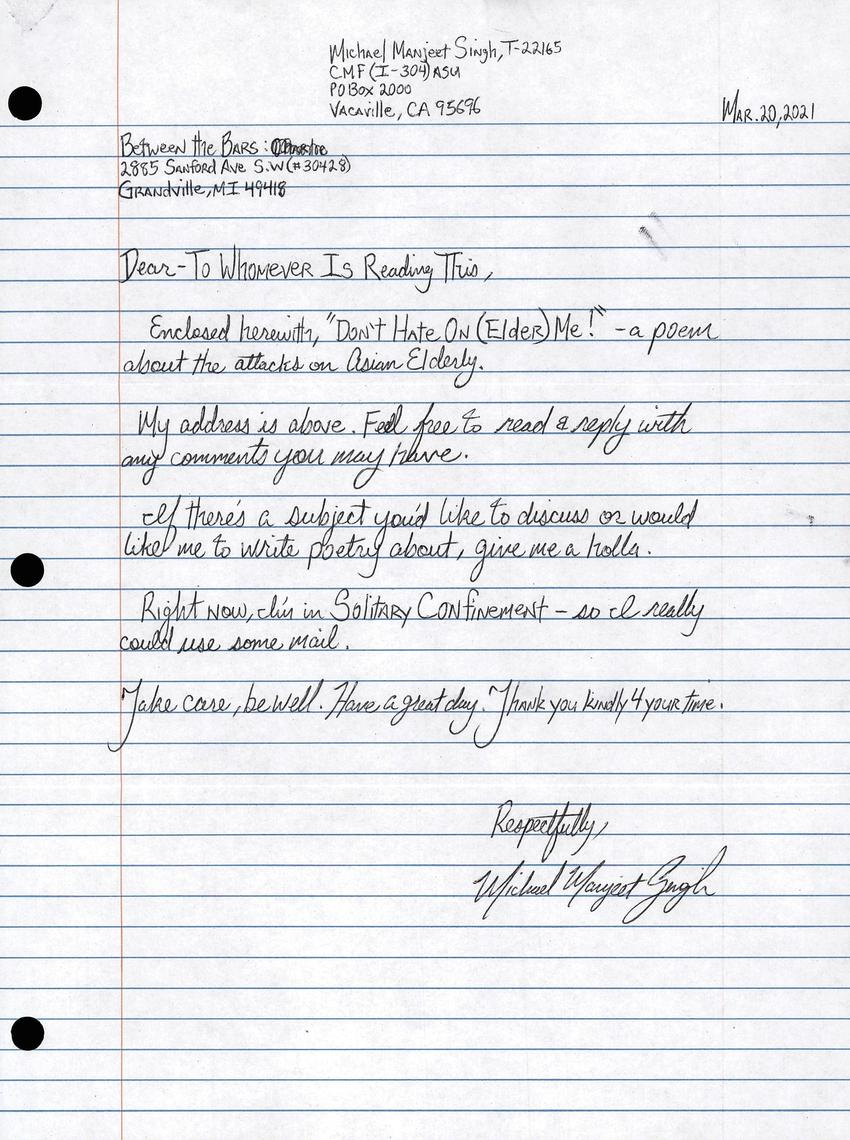 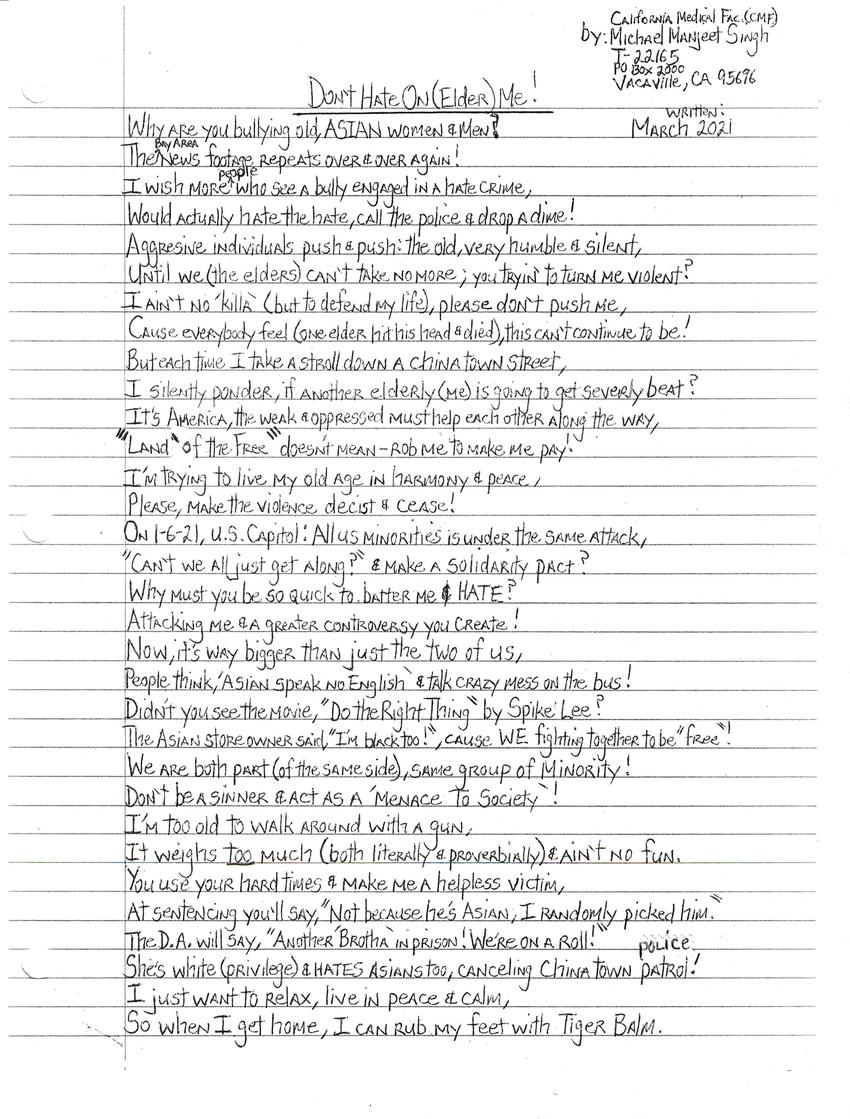 Dear - To Whomever Is Reading This,

Enclosed herewith, "Don't Hate On (Elder) Me!" - a poem about the attacks on Asian Elderly.

My address is above. Feel free to read a reply with any comments you hay have.

If there's a subject you'd like to discuss or would like me to write poetry about, give me a holla.

Right now, I'm in Solitary Confinement - so I really could use some mail.

Take care, be well. Have a great day. Thank you kindly 4 your time.

The Bay Area news footage repeats over & over again!
I wish more people who see a bully engaged in a hate crime,
Would actually hate the hate, call the police & drop a dime!
Aggressive individuals push & push: the old, very humble & silent,
Until we (the elders) can't take no more; you tryin' to turn me violent?
I ain't no 'killa' (but to defend my life), please don't push me,
Cause everybody feel (one elder hit his head & died), this can't continue to be!
But each time I take a stroll down a Chinatown street,
I silently ponder, if another elderly (me) is going to get severely beat?
It's America, the weak & oppressed must help each other along the way,
"Land 'of the Free'" doesn't mean - rob me to make me pay!
Please, make the violence desist & cease!
On 1-6-21, U.S. Capitol: All us minorities is under the same attack,
"Can't we all just get along?" & make a solidarity pact?
Why must you be so quick to batter me & hate?
Attacking me & a greater controversy you create!
Now, it's way bigger than just the two of us,
People think, 'Asian speak no English' & talk crazy mess on the bus!
Didn't you see the movie, "Do the Right Thing" by Spike Lee?
The Asian store owner said, "I'm black too!," cause WE fighting together to be "free"!
We are both part (of the same side), same group of minority!
Don't be a sinner & act as a 'menace to society'!
I'm too old to walk around with a gun,
It weighs too much (both literally & proverbially) & ain't no fun.
You use your hard times & make me a helpless victim,
At sentencing you'll say, "Not because he's Asian, I randomly picked him."
The D.A. will say, "Another 'Brotha' in prison! We're on a roll!"
She's white (privilege) & HATES Asians too, canceling Chinatown patrol!
I just want to relax, live in peace & calm,
So when I get home, I can rub my feet with Tiger Balm.

Thank you for the powerful poem! I was happy to finish the transcription for your post. God bless!
(scanned reply – view as blog post)
uploaded May 22, 2021.  Original (PDF) 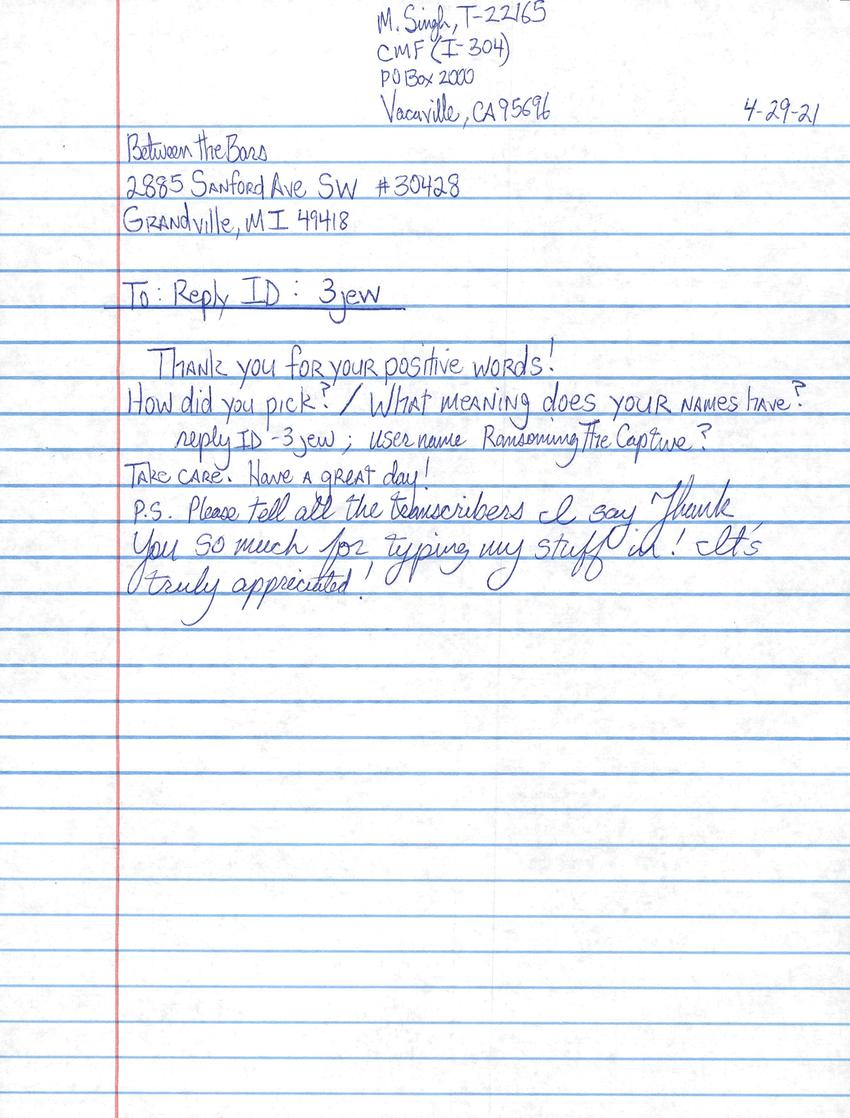 Please forgive the delayed response. "Ransoming the Captive" comes from the alternate name for the Christian corporal work of mercy of visiting the imprisoned. I picked your writing to transcribe because it was very powerful, beautifully constructed and sadly, all too relevant. But your writing demonstrates the importance of compassion and the strength that is derived from calling out hate. It truly was my pleasure to transcribe. 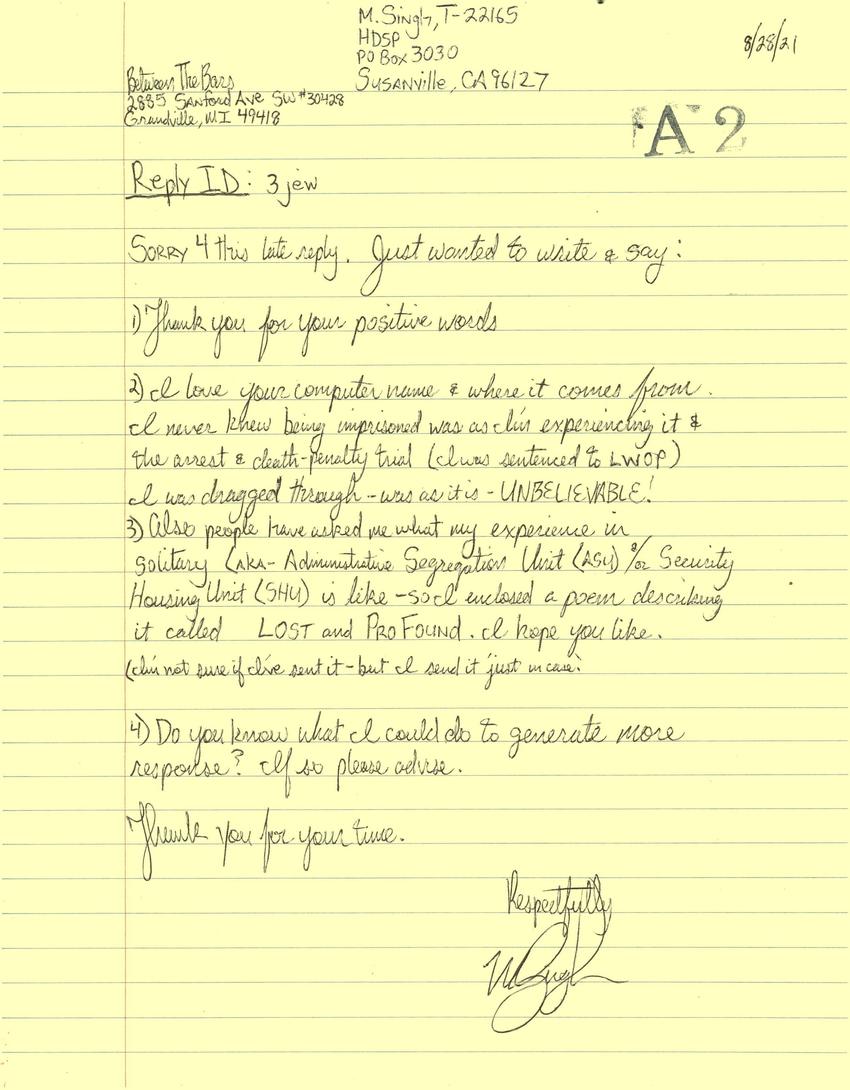 Please forgive me for the delayed reply. I'm glad you like my username. I deeply appreciate your writing. As for generating more response, I think just continuing to write as you're doing and speaking out through the Between the Bars platform will elicit greater response as time goes on. Thanks very much again, and God bless.