So Chauvin's on Trial - Now What? 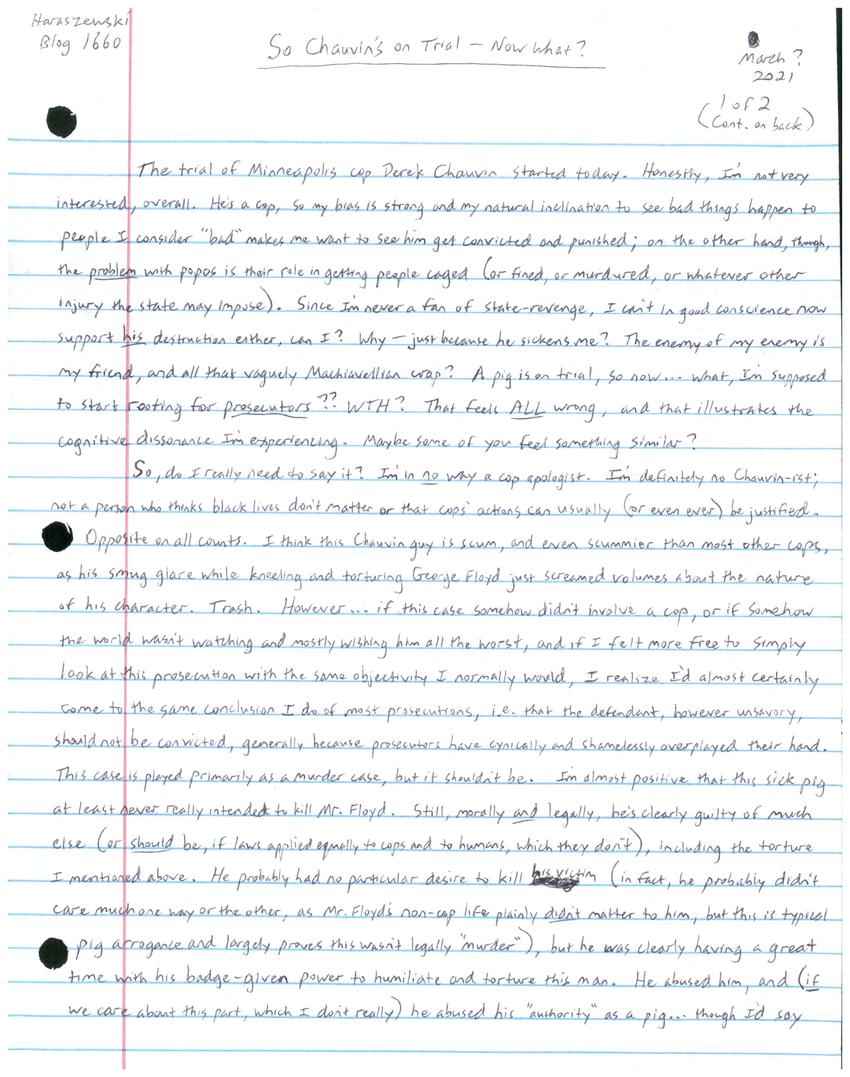 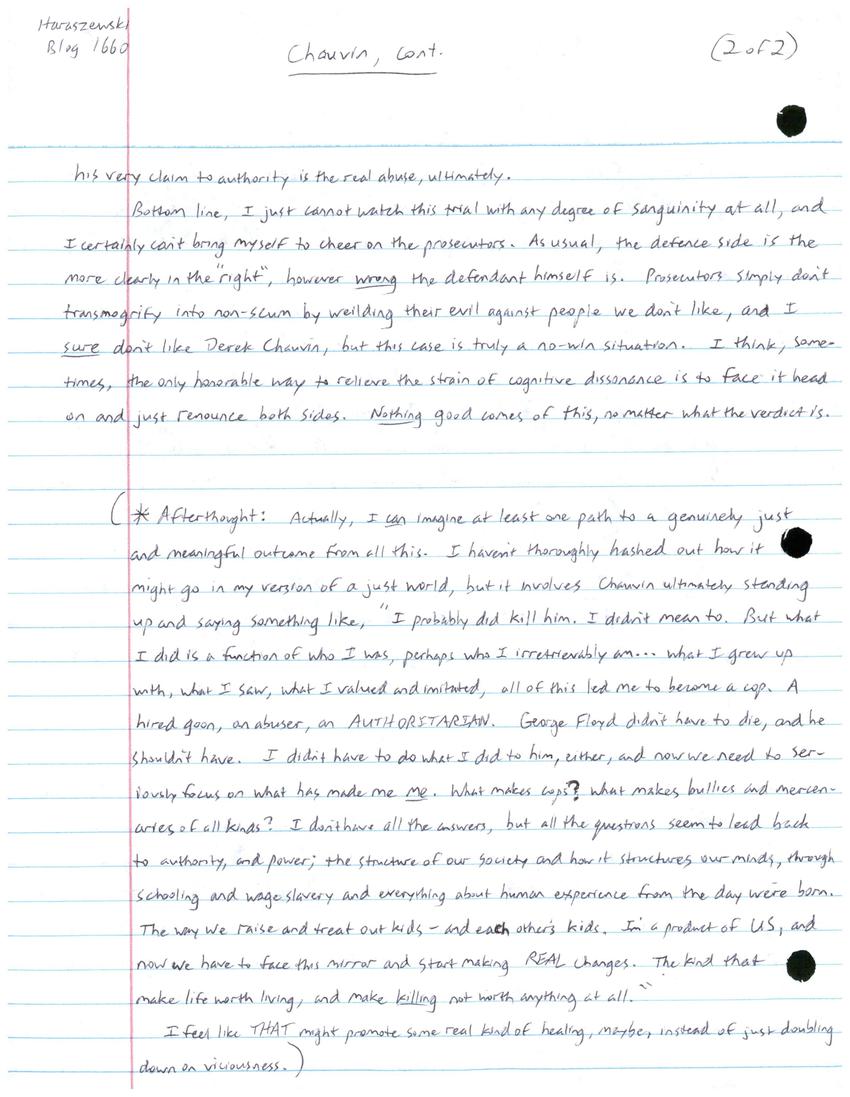 The trial of Minneapolis cop Derek Chauvin started today. Honestly, I'm not very interested, overall. He's a cop, so my bias is strong and my natural inclination to see bad things happen to people I consider "bad" makes me want to see him get convicted and punished; on the other hand, though, the problem with popos is their role in getting people caged (or fined, or murdered, or whatever other injury the state may impose). Since I'm never a fan of state-revenge, I can't in good conscience now support his destruction either, can I? Why - just because he sickens me? The enemy of my enemy is my friend, and all that vaguely Machiavellian crap? A pig is on trial, so now... what, I'm supposed to start rooting for prosecutors?? WTH? That feels ALL wrong, and that illustrates the cognitive dissonance I'm experiencing. Maybe some of you feel something similar?

So, do I really need to say it? I'm in no way a cop apologist. I'm definitely no Chauvin-ist; not a person who thinks black lives don't matter or that cops' actions can usually (or even ever) be justified. Opposite on all counts. I think this Chauvin guy is scum, and even scummier than most other cops, as his smug glare while kneeling and torturing George Floyd just screamed volumes about the nature of his character. Trash. However... if this case somehow didn't involve a cop, or if somehow the world wasn't watching and mostly wishing him all the worst, and if I felt more free to simply look at his prosecution with the same objectivity I normally would, I realize I'd almost certainly come to the same conclusion I do of most prosecutions, i.e. that the defendant, however unsavory, should not be convicted, generally because prosecutors have cynically and shamelessly overplayed their hand. This case is played primarily as a murder case, but it shouldn't be. I'm almost positive that this sick pig at least never really intended to kill Mr. Floyd. Still, morally and legally, he's clearly guilty of much else (or should be, if laws applied equally to cops and to humans, which they don't), including the torture I mentioned above. He probably had no particular desire to kill his victim (in fact, he probably didn't care much one way or the other, as Mr. Floyd's non-cop life plainly didn't matter to him, but this is typical pig arrogance and largely proves this wasn't legally "murder"), but he was clearly having a great time with his badge-given power to humiliate and torture this man. He abused him and (if we care about this part, which I don't really) he abused his "authority" as a pig... though I'd say his claim to authority is the real abuse ultimately. Bottom line, I Just cannot watch this trial with any degree of sanguinity at all, and I certainly can't bring myself to cheer on the prosecutors. As usually, the defense side is the more clearly in the "right", however wrong the defendant himself is. Prosecutors simply don't transmogrify into non-scum by weilding their evil against people we don't like, and I sure don't like Derek Chauvin, but this case is truly a no-win situation. I think, sometimes, the only honorable way to relieve the strain of cognitive dissonance is to face it head on and just renounce both sides. Nothing good comes of this, no matter what the verdict is.

(*Afterthought: Actually, I can imagine at least one path to a genuinely just and meaningful outcome from all this. I haven't thoroughly hashed out how it might go in my version of a just world, but it involves Chauvin ultimately standing up and saying something like,"I probably did kill him. I didn't mean to. But what I did is a function of who I was, perhaps who I irretrievably am... what I grew up with, what I saw, what I valued and imitated, all of this led me to become a cop. A hired goon, an abuser, an authoritarian. George Floyd didn't have to die, and he shouldn't have. I didn't have to do what I did to him, either, and now we need to seriously focus on what has made me me. What makes cops? What makes bullies and mercenaries of all kinds? I don't have all the answers, but all the questions seem to lead back to authority and power; the structure of our society and how it structures our minds, through schooling and wage slavery and everything about human experience from the day were born. The way we raise and treat our kids - and each other's kids. I'm a product of US, and now we have to face this mirror and start making REAL changes. The kind that make life worth living, and make killing not worth anything at all."
I feel like THAT might promote some real kind of healing, maybe, instead of just doubling down on viciousness.)