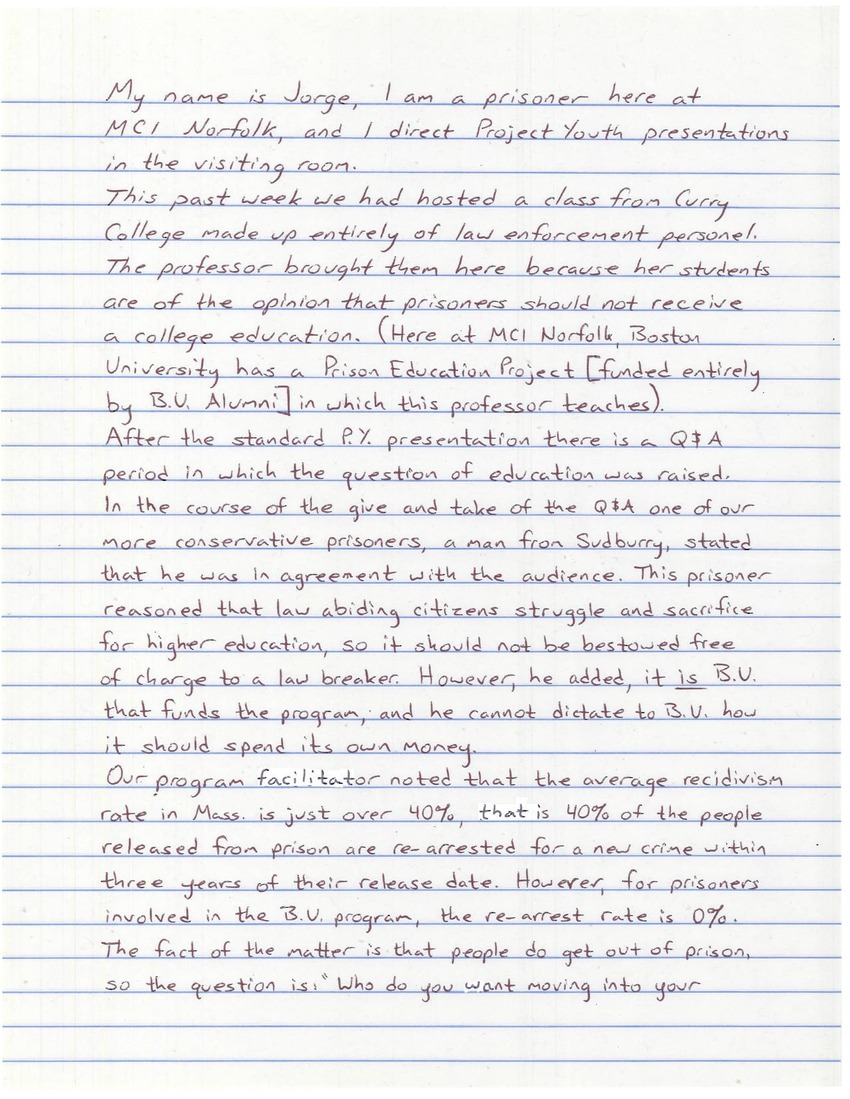 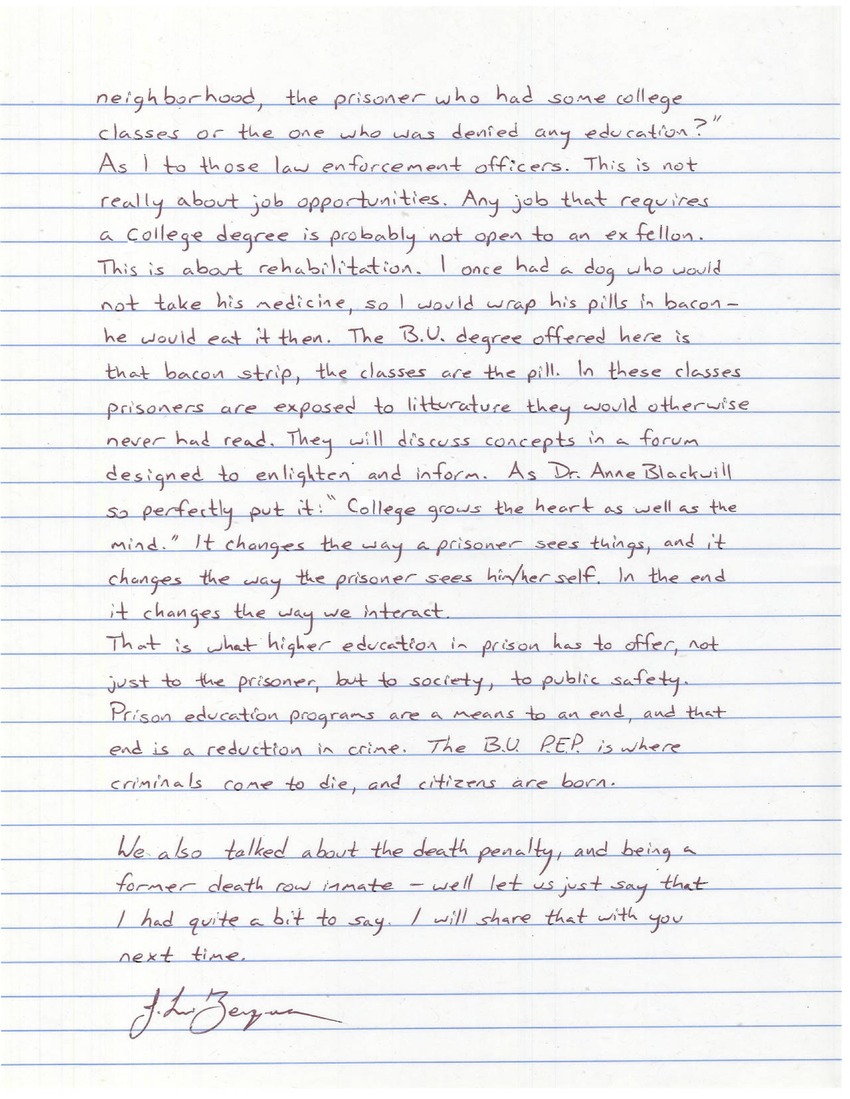 My name is Jorge, I am a prisoner here at MCI Norfolk, and I direct Project Youth presentations in the visiting room.

This past week we had hosted a class from Curry College made up entirely of law enforcement personnel. The professor brought them here because her students are of the opinion that prisoners should not receive a college education. (Here at MCI Norfolk, Boston University has a Prison Education Project [funded entirely by B.U. Alumni] in which this professor teaches.) After the standard P.Y. presentation there is a Q&A period in which the question of education was raised. In the course of the give and take of the Q&A, one of our more conservative prisoners, a man from Sudbury, stated that he was in agreement with the audience. This prisoner reasoned that law-abiding citizens struggle and sacrifice for higher education, so it should not be bestowed free of charge to a law-breaker. However, he added, it IS B.U. that funds the program, and he cannot dictate to B.U. how it should spend its own money.

Our program facilitator noted that the average recidivism rate in Mass. is just over 40%, that is 40% of the people released from prison are re-arrested for a new crime within three years of their release date. However, for prisoners involved in the B.U. program the re-arrest rate is 0%. The fact of the matter is that people do get out of prison, so the question is: "Who do you want moving into your neighborhood, the prisoner who had some college classes or the one who was denied any education?" As I to those law enforcement officers. This is not really about job opportunities. Any job that requires a college degree is probably not open to an ex-felon. This is about rehabilitation. I once had a dog who not take his medicine, so I would wrap his pills in bacon -- he would eat it then. The B.U. degree offered here is that bacon strip, the classes are the pill. In these classes prisoners are exposed to literature they would otherwise never have read. They will discuss concepts in a forum designed to enlighten and inform. As Dr. Anne Blackwill so perfectly put it: "College grows the heart as well as the mind." It changes the way a prisoner sees things and it changes the way the prisoner sees him/her self. In the end, it changes the way we interact.

That is what higher education in prison has to offer, not just to the prisoner but to society, to public safety. Prison education programs are a means to an end and that end is a reduction in crime. The B.U. P.E.P. is where criminals come to die, and citizens are born.

We also talked about the death penalty, and being a former death row inmate -- well, let us just say that I had quite a bit to say. I will share that with you next time.

Fantastic first post. You speak eloquently and entertainingly, although I doubt that BU will put the dog/bacon analogy on any of their brochures! I am looking forward to your next post.

Chris in MA.
What a powerful posting, and with data to support your argument. Very well done.

I think offering prisoners a college education could be a deterrant to repeat offenders.

I don't think anyone, prisoners included, should be denied an opportunity to higher education. What a great program to grow intellectually. I wholeheartedly support it.
I love your analogy about the bacon and dogs. Partly because I love bacon. Partly because I love dogs. Mostly because it was even true for pretty much everyone at the non-prison college I went to. We were all after the bacon. And some of swallowed the pill! Although I have to say, quite a few of us ate the bacon and spit out the pill. This can be a problem with dogs too, I've found. The solution, in that case, is to put your hand in their mouth, stick the pill as far down the throat as you can, and then hold the mouth shut so they are forced to swallow it. If they are a good dog they won't bite you. I'm not sure this analogy works anymore.