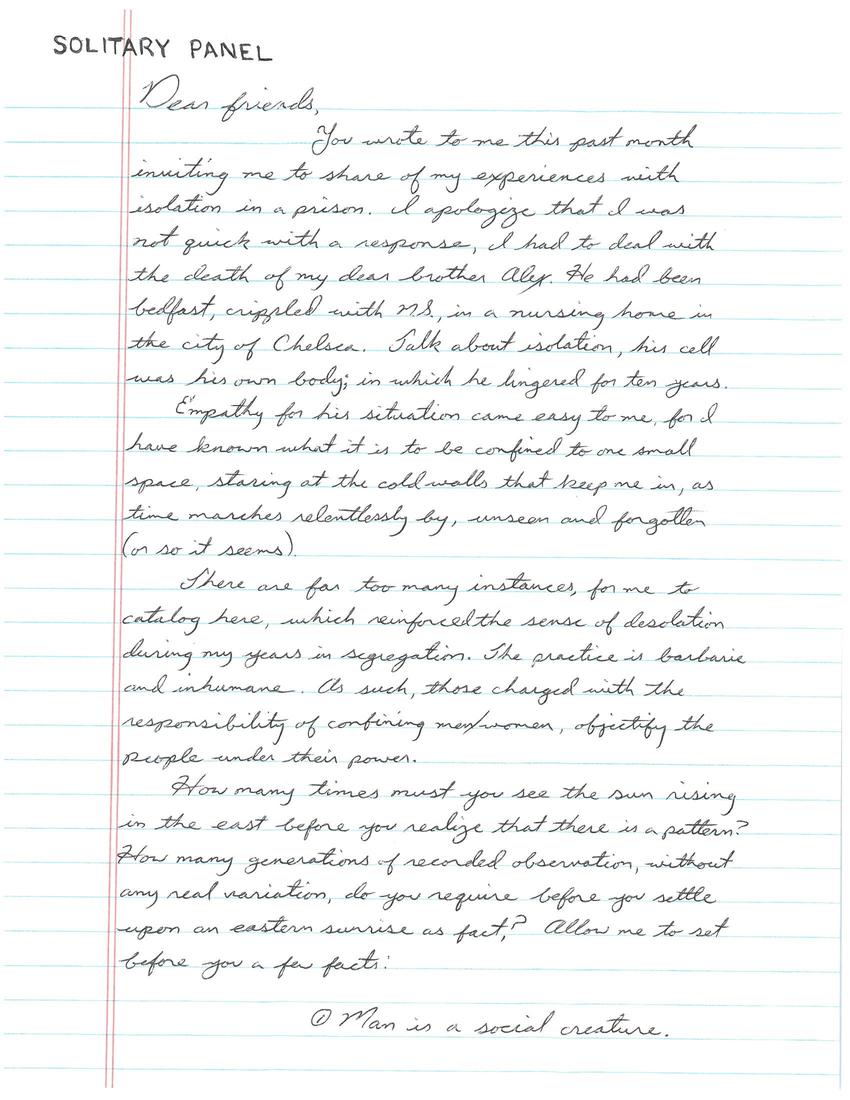 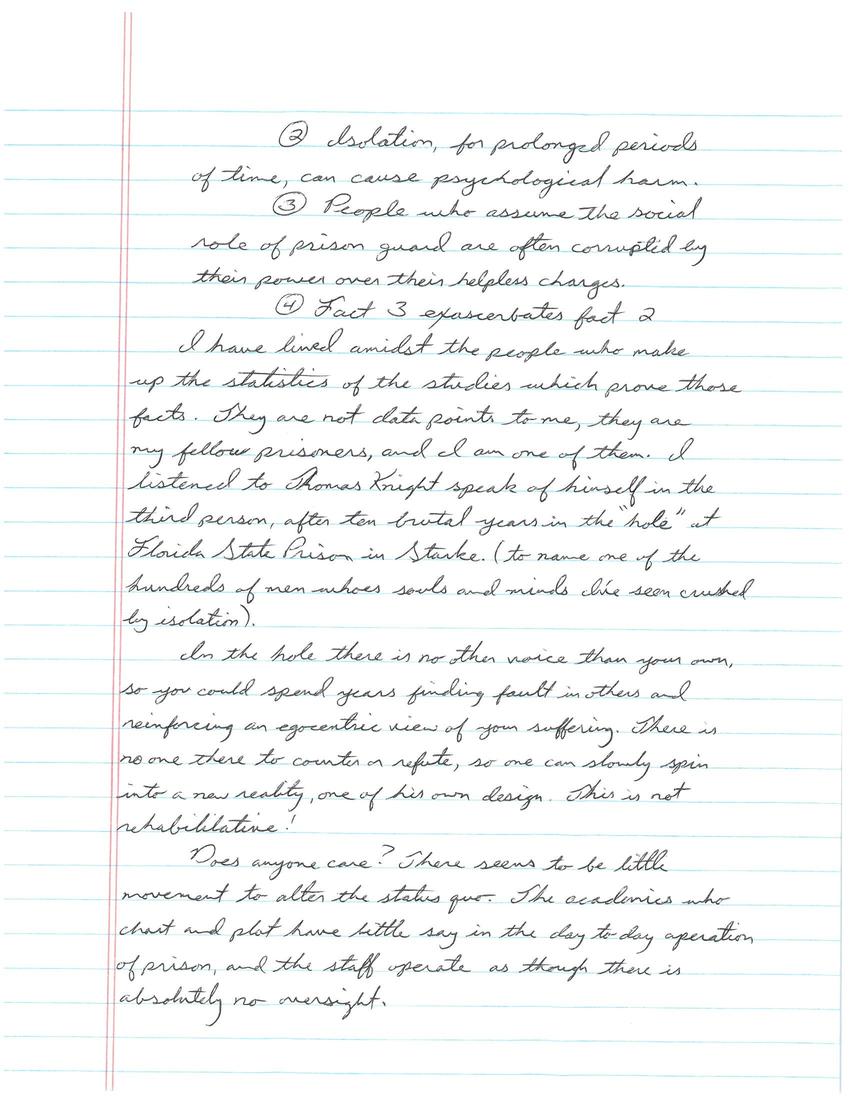 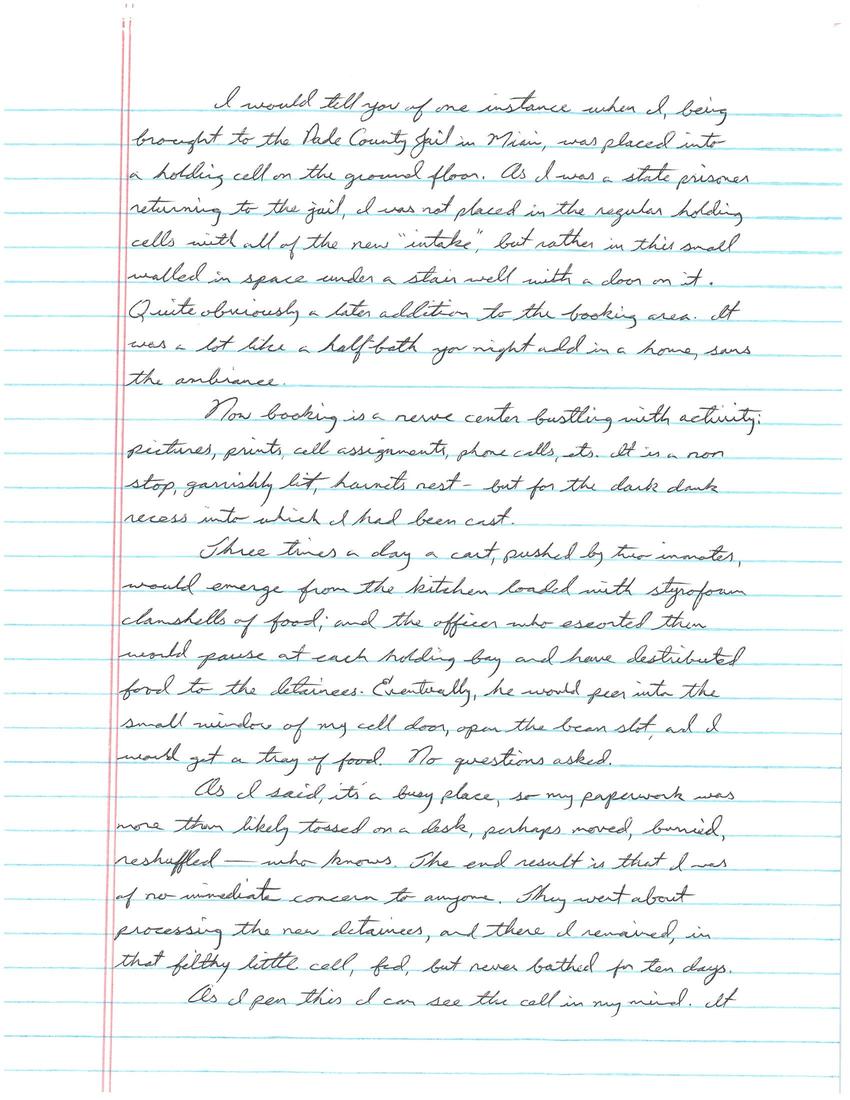 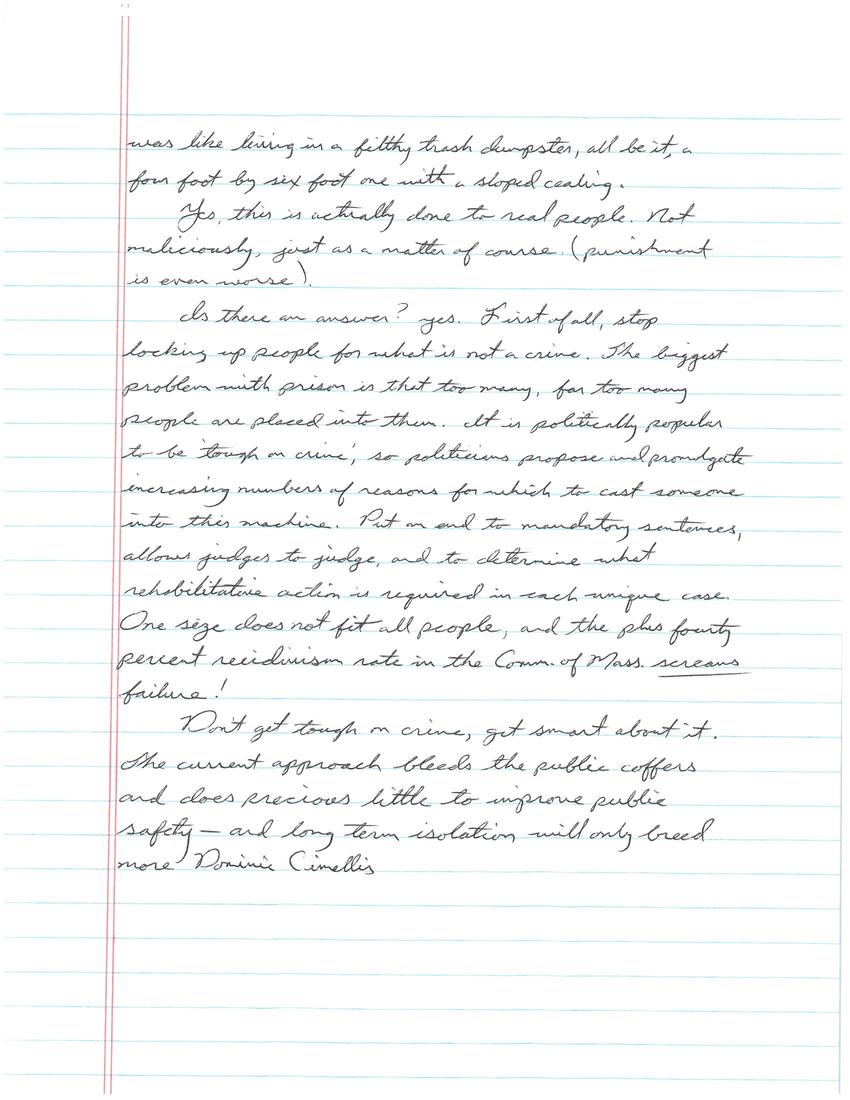 You wrote to me this past month inviting me to share of my experiences with isolation in a prison. I apologize that I was not quick with a response, I had to deal with the death of my dear brother Alex. He had been bedfast, crippled with M.S. in a nursing home in the city of Chelsea. Talk about isolation, his cell was his own body; in which he lingered for ten years.

Empathy for his situation came easy to me, for I have known what it is to be confined to one small space, staring at the cold walls that keep me in, as time marches relentlessly by, unseen and forgotten (or so it seems).

There are far too many instances, for me to catalog here, which reinforced the sense of desolation during my years in segregation. The practice is barbaric and inhumane. As such, those charged with the responsibility of confining men/women, objectify the people under their power.

How many times must you see the sun rising in the east before you realize that there is a pattern? How many generations of recorded observation, without any real variation, do you require before you settle upon an eastern sunrise as fact? Allow me to set before you a few facts:

1) Man is a social creature.
2) Isolation, for prolonged periods of time, can cause psychological harm.
3) People who assume the social role of prison guard are often corrupted by their power over their helpless charges.
4) Fact 3 exacerbates fact 2. I have lived amidst the people who make up the statistics of the studies which prove those facts. They are not data points to me, they are my fellow prisoners, and I am one of them. I listened to Thomas Knight speak of himself in the third person, after ten brutal years in the "hole" at Florida State Prison in Starke (to name one of the hundreds of men whose souls and minds I've seen crushed by isolation).

In the hole there is no other voice than your own, so you could spend years finding fault in others and reinforcing an egocentric view of your suffering. There is no one there to counter or refute, so one can slowly spin into a new reality, one of his own design. This is not rehabilitative!

Does anyone care? There seems to be little movement to alter the status quo. The academics who chart and plot have little say in the day to day operation of prison, and the staff operate as though there is absolutely no oversight.

I would tell you of one instance when I, being brought to the Dade County Jail in Miami, was placed into a holding cell on the ground floor. As I was a state prisoner returning to the jail, I was not placed in the regular holding cells with all of the new "intake", but rather in this small walled in space under a stairwell with a door on it. Quite obviously a later addition to the booking area. It was a lot like a half-bath you might add in a home, sans the ambiance.

Now booking is a nerve center bustling with activity: pictures, prints, cell assignments, phone calls, etc. It is a non-stop, garishly lit, hornets' nest - but for the dark dank recess into which I had been cast.

Three times a day a cart, pushed by two inmates, would emerge from the kitchen loaded with styrofoam clamshells of food; and the officer who escorted them would pause at each holding bay and have distributed food to the detainees. Eventually, he would peer into the small window of my cell door, open the bean slot, and I would get a tray of food. No questions asked.

As I said, it's a busy place, so my paperwork was more than likely tossed on a desk, perhaps moved, buried, reshuffled - who knows. The end result is that I was of no immediate concern to anyone. They went about processing the new detainees, and there I remained, in that filthy little cell, fed, but never bathed for ten days.

As I pen this I can see the cell in my mind. It was like living in a filthy trash dumpster, albeit, a four foot by six foot one with a sloped ceiling.

Yes, this is actually done to real people. Not maliciously, just as a matter of course (punishment is even worse).

Is there an answer? Yes. First of all, stop locking up people for what is not a crime. The biggest problem with prison is that too many, far too many people are placed into them. It is politically popular to be 'tough on crime', so politicians propose and promulgate increasing numbers of reasons for which to cast someone into this machine. Put an end to mandatory sentences, allow judges to judge, and to determine what rehabilitative action is required in each unique case. One size does not fit all people, and the plus forty percent recidivism rate in the Comm. of Mass. SCREAMS failure!

Don't get tough on crime, get smart about it. The current approach bleeds the public coffers and does precious little to improve public safety - and long term isolation will only breed more Dominic Cinellis.