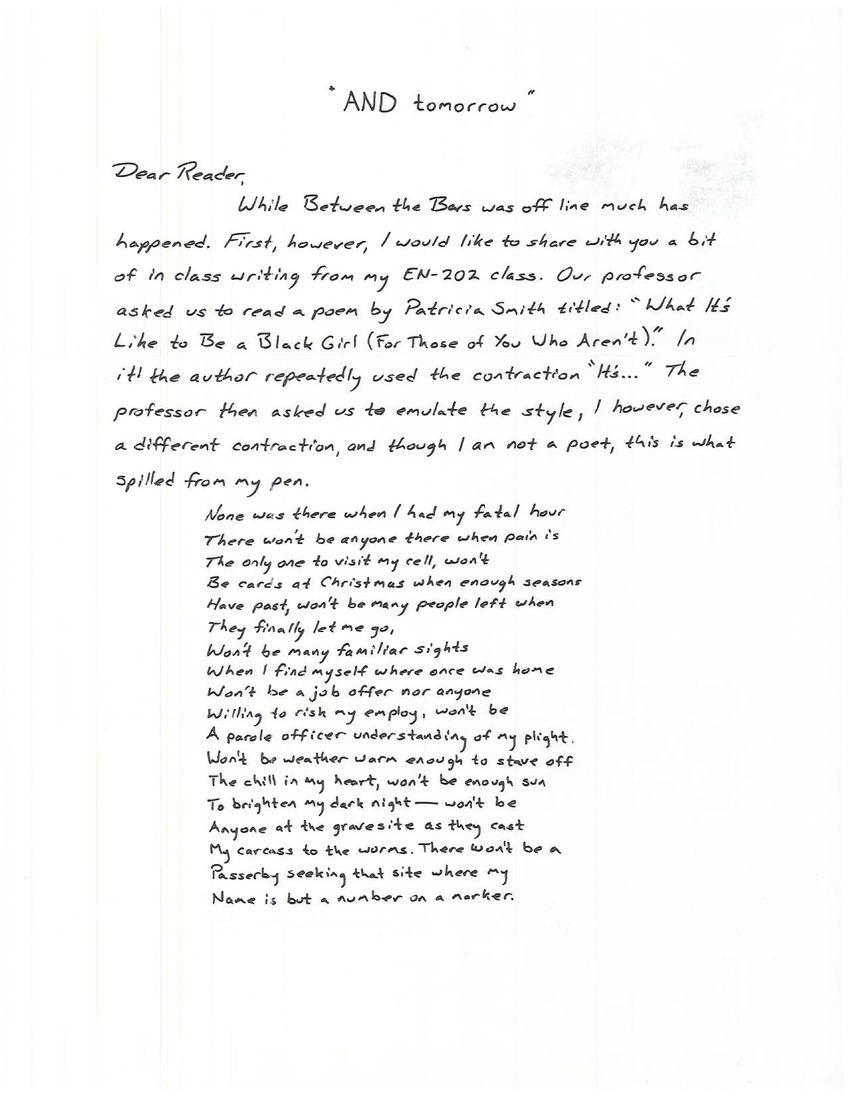 While Between Bars was off line much has happened. First, however, I would like to share with you a bit of in class writing from my EN-202 class. Our professor asked us to read a poem by Patricia Smith titled: "What It's Like to Be a Black Girl (For Those of You Who Aren't)." In it the author repeatedly used the contraction"It's..." The professor then asked us to emulate the style, I however, chose a different contraction, and though I am not a poet, this is what spilled from my pen.

None was there when I had my fatal hour
There won't be anyone there when pain is
The only one to visit my cell, won't
Be cards at Christmas when enough seasons
Have past, won't be many people left when
They finally let me go,
Won't be many familiar sights
When I find myself where once was home
Won't be a job offer nor anyone
Willing to risk my employ, won't be
A parole officer understanding my plight.
Won't be warm enough to stave off
The chill in my heart, won't be enough sun
To brighten my dark night—won't be
Anyone at the gravesite as they cast
My carcass at the worms. They won't be a
Passerby seeking that site where my
Name is but a number on a marker.

Excellent poem Jorge. Keep writing them...
Dude! Congrats on graduating from BU!
Yup, Dom pretty much ruined the parole process for awhile. I don't share your humanistic viewpoint of the guy, though. I thought he was pretty much a bag of S**t, though that's a personal viewpoint and not reflective of the realities of transitioning from prison to the outside world. I think if I'd been on parole, I would have been back in pretty quickly-parole seems geared to screw you over.
I tried your email address, but it didn't work-resend it to me or have your sister shoot me an email, please. I'll send some pics of me and the wife...no not like that!
We're buying a biz in NC. A night club/music venue. Should be fun, and it makes enough to live off of-not much more, but enough to eat. That's all you need in the end.
So Check Point got arrested...AWESOME! Hope he ends up up sate! It would do him some good!
I'm doing well, Jorge. Got my shit pretty much together, and once we get this nightclub, I'll have enough $ coming in to live by without having to bust my ass too much.
I hope you get some leeway from FL on your parole!
I'll send pics when I hear from your sister!
Take it easy, Bro!
And again, big props on your graduation!
Your Friend,
-Rob Fortini-