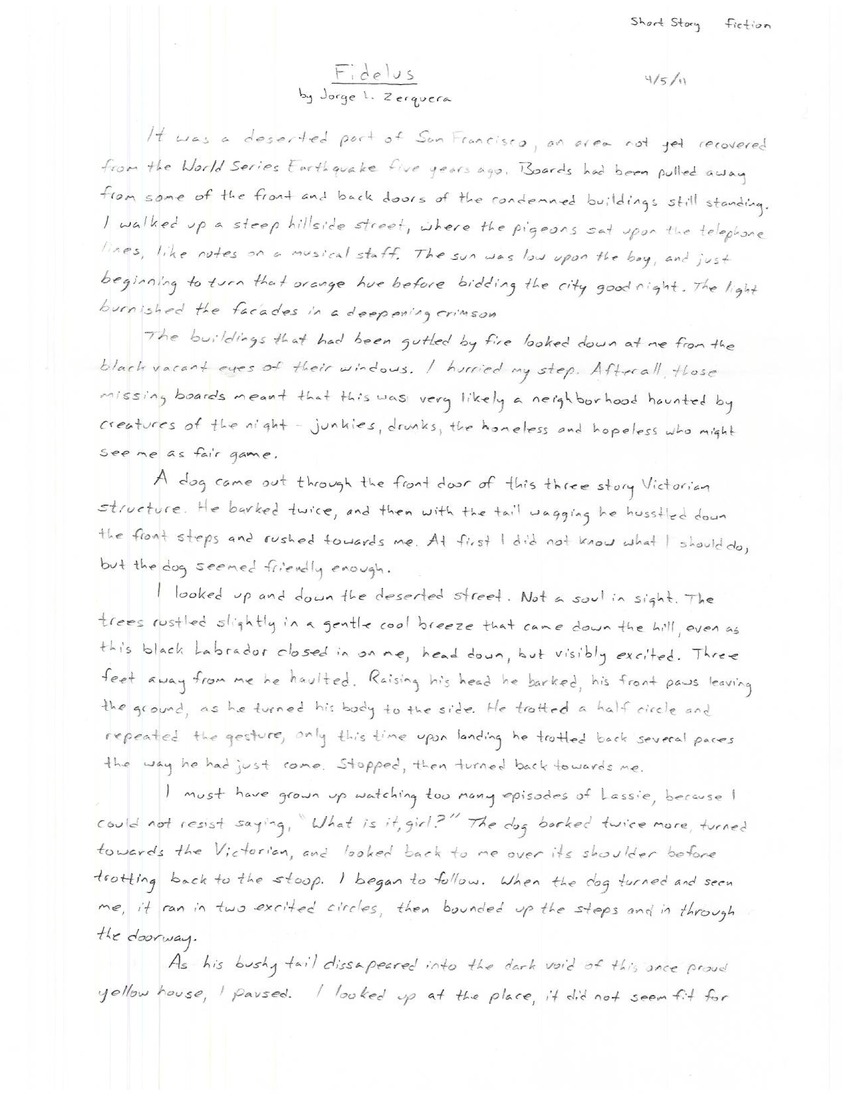 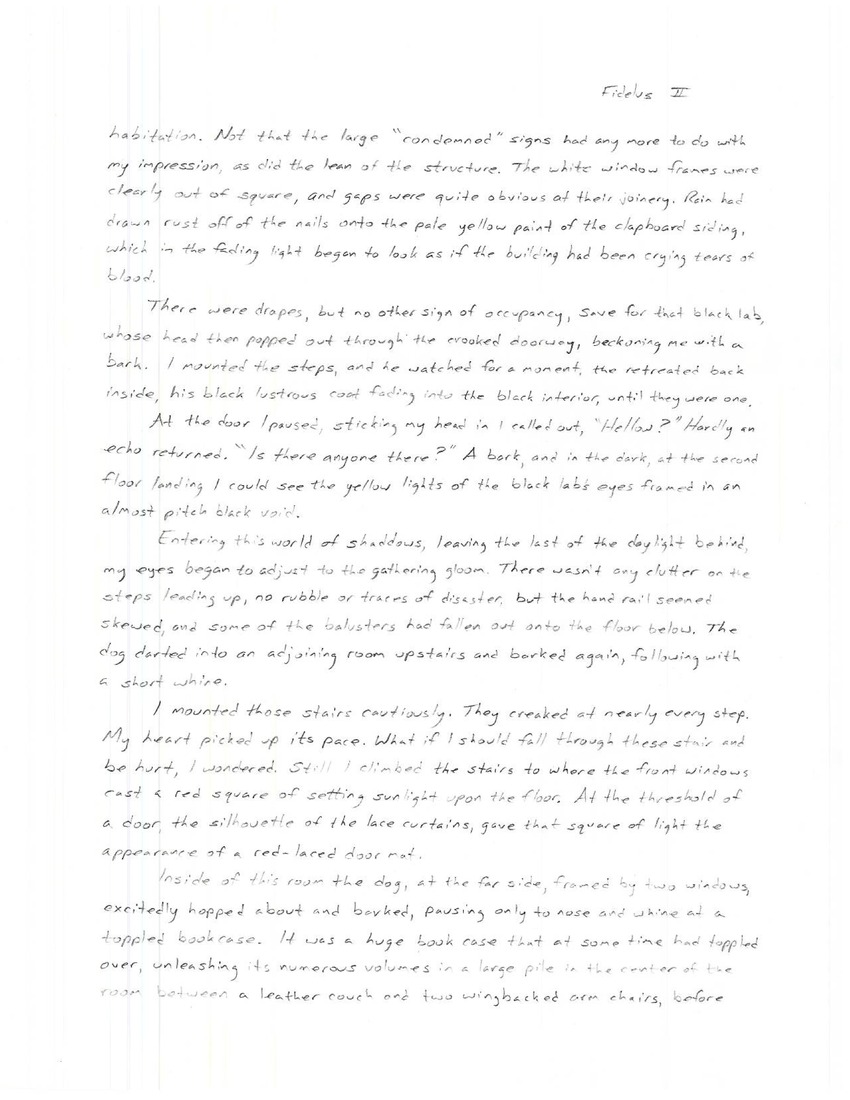 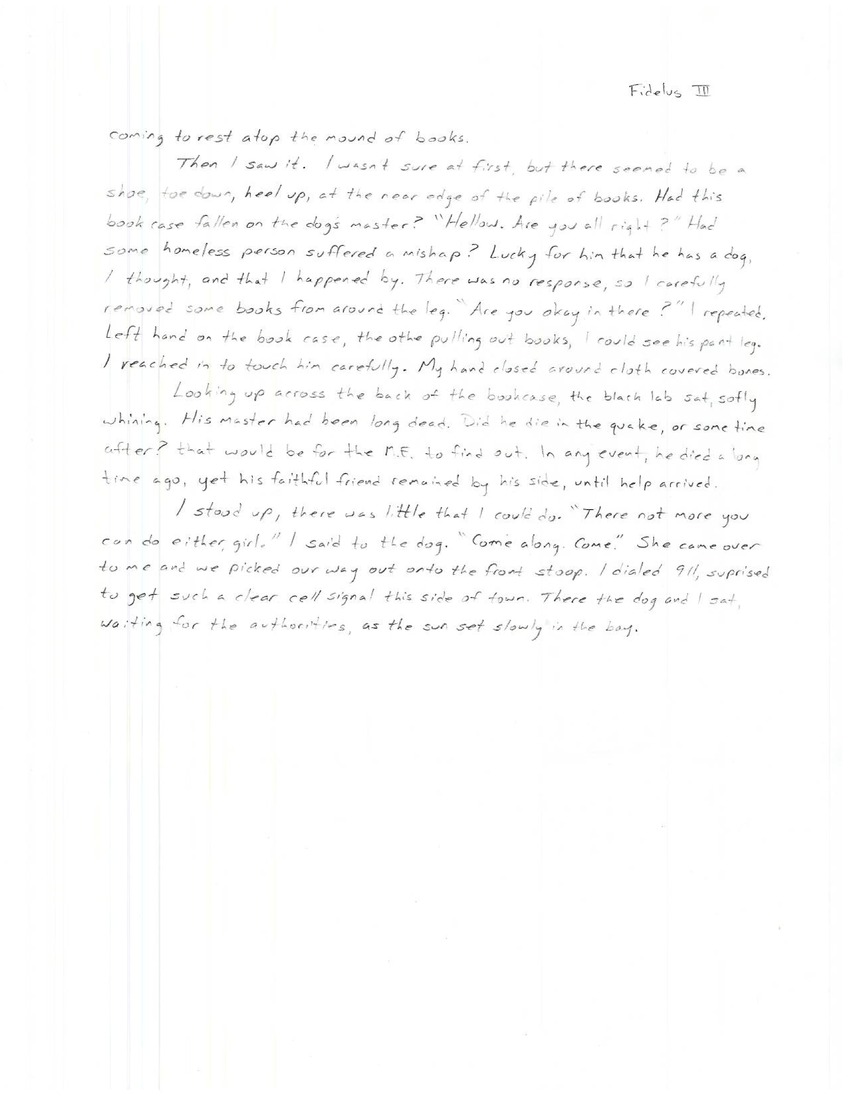 Fidelus
By Jorge I. Zerquera

It was a deserted part of San Francisco, an area not yet recovered from the World Series Earthquake five years ago. Boards had been pulled away from some of the front and back doors of the condemned buildings still standing. I walked up a steep hillside street where the pigeons sat upon the telephone lines like notes on a musical staff. The sun was low upon the bay and just beginning to turn that orange hue before bidding the city good night, the light burnished the facades in a deepening crimson.

The buildings that had been gutted by five looked down at me from the black vacant eyes of their windows. I hurried my step. After all, those missing boards meant that this was very likely a neighborhood haunted by creatures of the night: junkies, drunks, the homeless and hopeless who might see me as fair game.

A dog came out through the front door of this three-story Victorian structure. He barked twice and then, tail wagging, he hustled down the front steps and rushed towards me. At first, I did not know what I should do, but the dog seemed friendly enough.

I looked up and down the deserted street. Not a soul in sight. The trees rustled slightly in a gentle cool breeze that came down the hill, even as this black Labrador closed in on me, head down, but visibly excited. Three feet away from me, he halted. Raising his head, he barked, his front paws leaving the ground as he turned his body to the side. He trotted a half circle and repeated the gesture, only this time upon landing, he trotted back several paces the way he had just came, stopped, then turned back towards me.

I must have grown up watching too many episodes of Lassie because I could not resist saying, "What is it, girl?" The dog barked twice more, turned towards the Victorian, and looked back at me over its shoulder before trotting back to the stoop. I began to follow. When the dog turned and saw me, it ran in two excited circles before bounding up the steps and through the doorway.

As his bushy tail disappeared into the dark void of this same proud yellow house, I paused. I looked up at the place that did not seem fit for habitation. Not that the large "condemned" signs had anymore to do with my impression as the lean of the structure. The white window frames were clearly out of square and gaps were quite obvious at their joinery. Rain had speckled rust onto the nails and the pale yellow paint of the cupboard siding which, in the fading light, began to look as if the building had been crying tears of blood.

There were drapes but no other sing of occupancy, save for that black Lab whose head popped out through the crooked doorway, beckoning me with a bark. I mounted the steps, and he watched for a moment. Then he retreated back inside, his black luxurious coat fading into the black interior until they were one.

At the door, I paused, sticking my head in as I called out, "Hello?" Hardly an echo returned. "Is anyone there?"

A bark in the dark. At the second floor landing, I could see the yellow lights of the black lab's eyes framed in an almost pitch black void. Entering this world of shadows and leaving the last of daylight behind, my eyes began to adjust to the gathering gloom. There wasn't any clutter on the steps leading up, no rubble nor traces of disaster. But the handrail seemed skewed and some of the balusters had fallen onto the floor below. The dog darted into an adjoining room upstairs and barked again before giving a short whine.

I mounted the stairs cautiously. They creaked at nearly every step. My heart picked up its pace. What if I should fall through these stairs and be hurt, I wondered. Still, I climbed the stairs to where the front windows cast a red square of setting sunlight on the floor. At the threshold of a door, the silhouette of the lace curtains gave that square of light the appearance of a red-laced doormat.

Inside of this room, the dog, at the far side and framed by two windows, excitedly hopped about and barked, pausing only to nose and whine at a toppled bookcase. It was a huge bookcase that at some time toppled over, unleashing its numerous volumes in a large pile at the center of the room between a leather couch and two wing-backed armchairs before coming to rest atop a mound of books.

Then I saw it. I wasn't sure at first, but there seemed to be a shoe, toe down, heel up, at the rear edge of the book pile. Had this bookcase fell on the dog's master? "Hello, are you all right?" Had some homeless person suffered a mishap? Lucky for him to have a dog, I thought, and that I happened by.

There was no response so I carefully removed some books from around the leg.

"Are you okay in there?" I repeated, left hand on the bookcase, the other pulling out books. I could his pant leg. I reached in to touch him carefully. My hand closed around the cloth-covered bones.

Looking up across the back of the bookcase, the black lab sat, softly whining. His master had been long dead. Did he die in the quake or some time after? That would be for the P.F. to find out. In any event, he died a long time ago. Yet his faithful friend remained by his side until help arrived.

I stood up. There was little that I could do.

She came over to me, and we picked our way out onto the front step. I dialed 911, surprised to get such a clear cell signal this side of town. There the dog and I sat, waiting for the authorities as the sun set slowly in the bay.