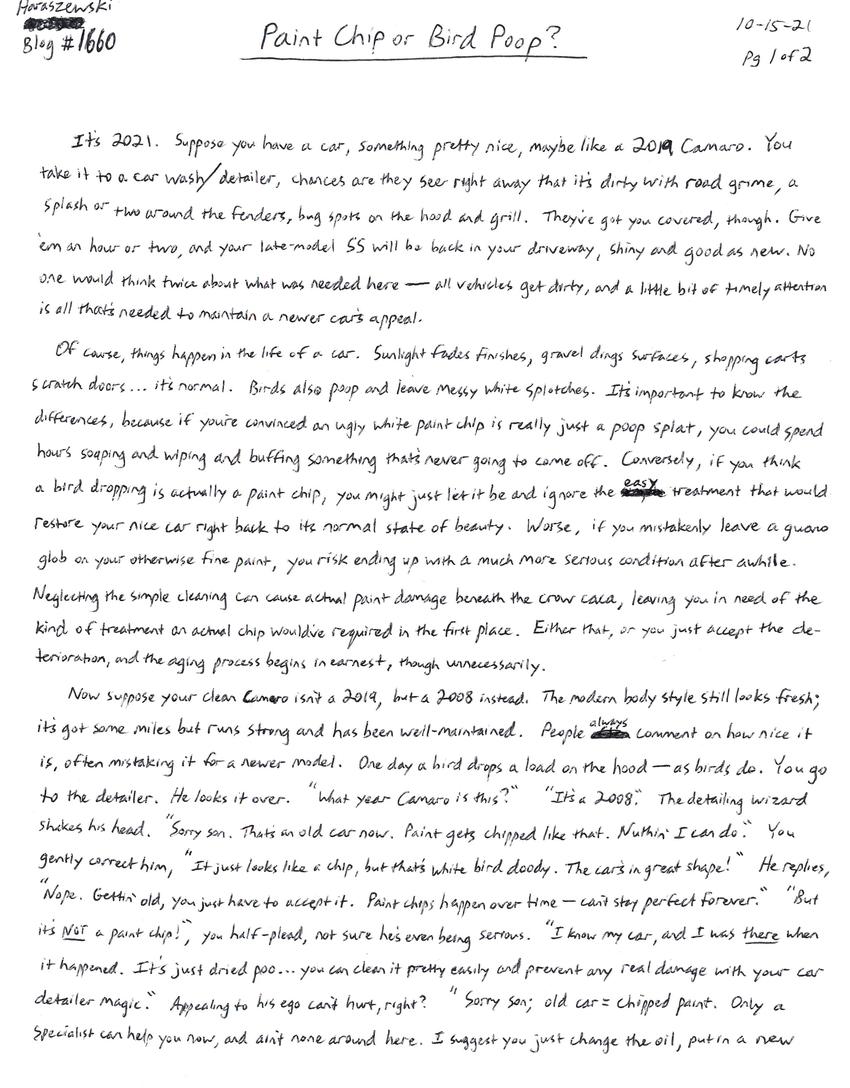 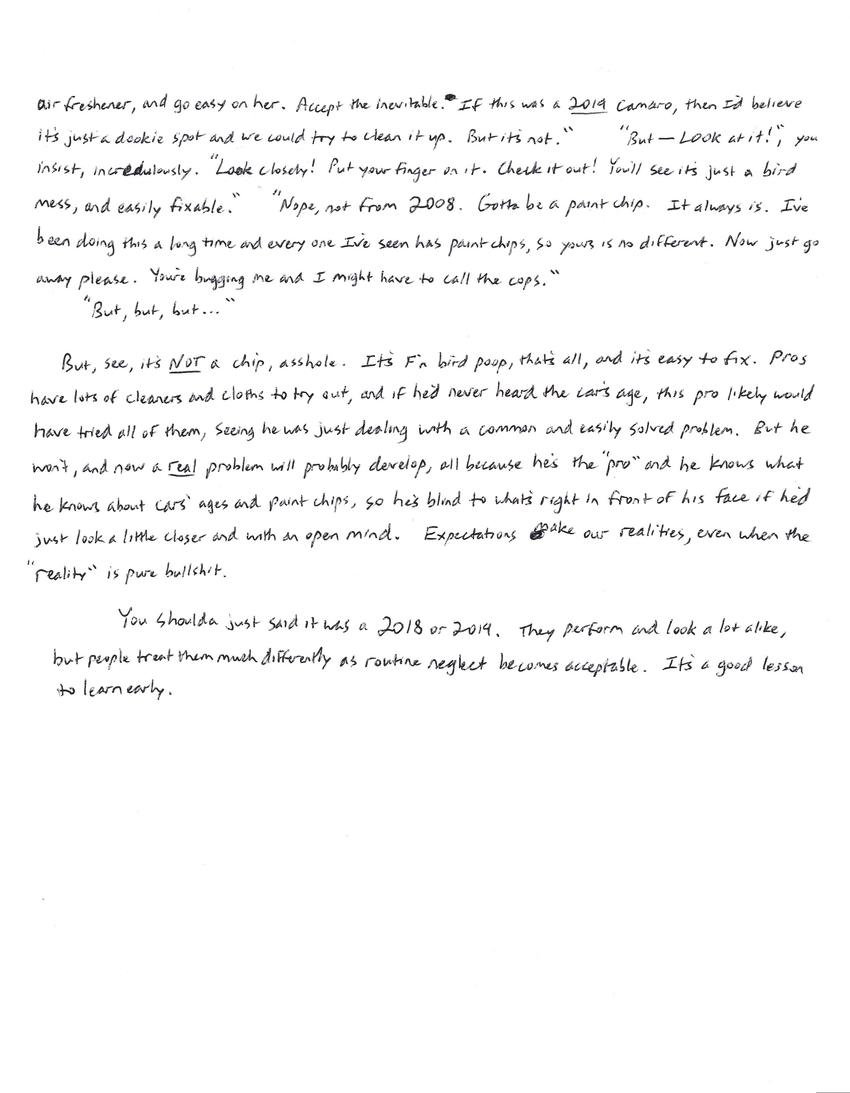 It's 2021. Suppose you have a car, something pretty nice, maybe like a 2019 Camaro. You take it to a car wash/detailer, chances are they see right away that it's dirty with road grime, a splash or two around the fenders, bug spots on the hood and grill. They've got you covered, though. Give 'em an hour or two, and your late-model SS will be back in your driveway, shiny and good as new. No one would think twice about what was needed here-- all vehicles get dirty, and a little bit of timely attention is all that's needed to maintain a newer car's appeal.

Of course, things happen in the life of a car. Sunlight fades finishes, gravel dings surfaces, shopping carts scratch doors... it's normal. Birds also poop and leave messy white splotches. It's important to know the differences, because if you're convinced an ugly white paint chip is really a poop splat, you could spend hours soaping and wiping and buffing something that's never going to come off. Conversely, if you think a bird dropping is actually a paint chip, you might just let it be and ignore the easy treatment that would restore your nice car right back to the normal state of beauty. Worse, if you mistakenly leave a glob on your otherwise fine paint, you risk ending up with a much more serious condition after a while. Neglecting the simple cleaning can cause actual paint damage beneath the crow caca, leaving you in need of the kind of treatment an actual chip would've required in the first place. Either that, or you just accept the deterioration and the aging process begins, in earnest, though unnecessarily.

Now suppose your clean Camaro isn't a 2019, but a 2008 instead. The modern body style still looks fresh; it's got some miles but runs strong and has been well-maintained. People always comment on how nice it is, often mistaking it for a newer model. One day a bird drops a load on the hood-- as birds do. You go to the detailer. He looks it over. "What year Camaro is this?" "It's a 2008." The detailing wizard shakes his head. "Sorry son. That's an old car now. Paint gets chipped like that. Nuthin' I can do." You gently correct him, "It just looks like a chip, but that's white bird doody. The car's in great shape!" "But it's NOT a paint chip!", you half-plead, not sure he's even being serious. "I know my car, and I was there when it happened. It's just dried poo... you can clean it pretty easily and prevent and real damage with your car detailer magic." Appealing to his ego can't hurt, right? "Sorry son; old car=chipped paint. Only a specialist can help you now, and ain't none around here. I suggest you just change the oil, put in a new air freshener, and go easy on her. Accept the inevitable. If this was a 2019 Camaro, then I'd believe it's just a dookie spot and we could try to clean it up. But it's not." "But---look at it!", you insist incredulously. "Look closely! Put your finger on it. Check it out! You'll see it's just a bird mess, and easily fixable." "Nope, not from 2008. Gotta be a paint chip. It always is. I've been doing this a long time and every one I've seen has paint chips, so yours is no different. Now just go away please. You're bugging me and I might have to call the cops."
"But, but but..."

But, see, it's NOT a chip, asshole. It's F'n bird poop, that's all, and it's easy to fix. Pros have lots of cleaners and clots to try out, and if he'd never heard the car's age, this pro likely would have tried all of them, seeing he was just dealing with a common easily solved problem. But he won't, and now a real problem will probably develop, all because he's the "pro" and he knows what he knows about cars' ages and paint chips, so he's blind to what's right in front of his face if he'd just look a little closer and with an open mind. Expectations make our realities, even when the "reality" is pure bullshit.

You shoulda just said it was a 2018 or 2019. They perform and look a lot alike, but people treat them much differently as routine neglect becomes acceptable. It's a good lesson to learn early.