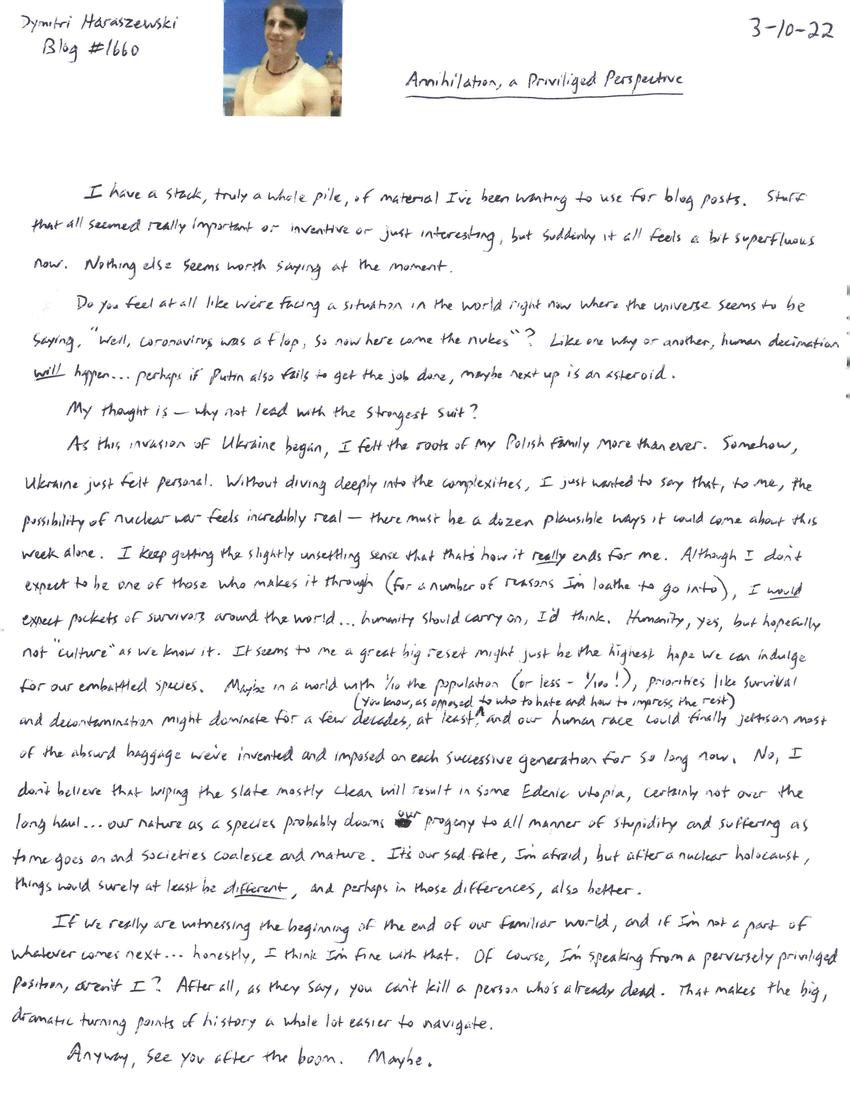 Dymitri Haraszewski
Blog #1660
3-10-22
Annihilation, a Priviliged Perspective
I have a stack, truly a whole pile, of material I've been wanting to use for block posts. Stuff that all seems really important or inventive or just interesting, but suddenly it all feels a bit superfluous now Nothing else seems worth sayin at the moment.

Do you fee like we're facing a situation in the world right now where the universe seems to be saying " well, coronavirus was a flop, so now here come the nukes" ? Like one way or another, human decimation will happen... perhaps if Putin also fails to get the job done, maybe next up is an asteroid.

My thought is - why not lead with the strongest suit?

As this invasion of Ukraine began, I felt the roots of my Polish family more than ever. Somehow Ukraine just felt personal. Without diving deeply into the complexities, I just wanted to say that, to me, the possibility of nuclear war feels incredibly real - there must be a dozen plausible ways it could come about this week alone. I Keep getting the slightly unsettling sense that that's how it really ends for me. Although I don't expect to be one of those who makes it through (for a number of reasons I'm loathe to go into), I would expect pockets of survivors around the world... humanity should carry on, I'd think. Humanity, yes, but hopefully not "culture" as we know it. It seems to me a great big reset might just be the highest hope we can indulge for out embattled species. Maybe in a world with 1/10 the population (or less - 1/100! ), priorities like survival and decontamination might dominate for a few decades, at least (you know, as opposed to who to hate and how to impress the rest) and our human race could finally jettison most of the absurd baggage we've invented and imposed on each successive generation for so long now. No, I don't believe that wiping the slate mostly clean will result in the same Edenic utopia, certainly not over the long haul... out nature as a species probably dooms our progeny to all manner of stupidity and suffering as time goes on and societies coalesce and mature. It's our sad fate, I'm afraid but after a nuclear holocaust, things would surely be different, and perhaps in those difference, also better.

If we really are witnessing the beginning of the end of our familiar world, and if I'm not a part of whatever comes next... honestly, I think I'm fine with that. Of course, I'm speaking from perversely privilged position, aren't I? After all, as they say, You can't kill a person who's already dead. That makes the big, dramatic turning points of history a whole lot easier to navigate.

Anyway, see you after the boom. Maybe.