The Triumph Of Weakness 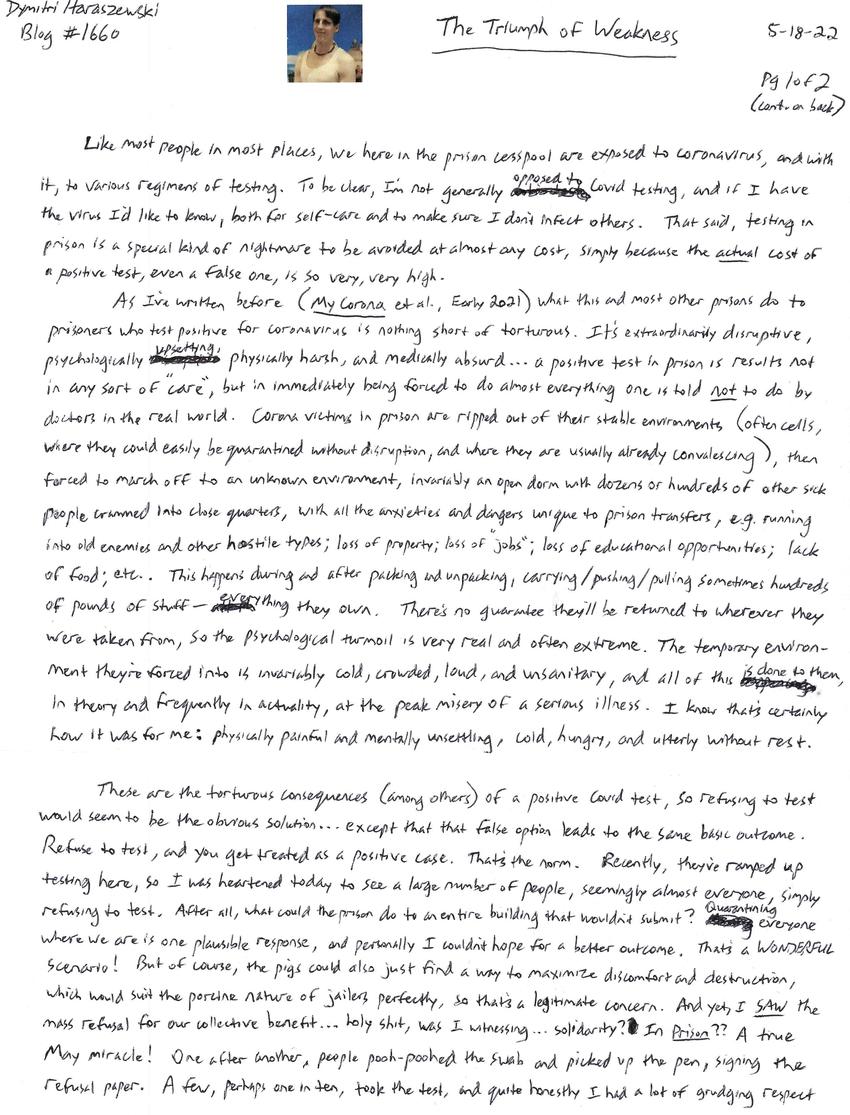 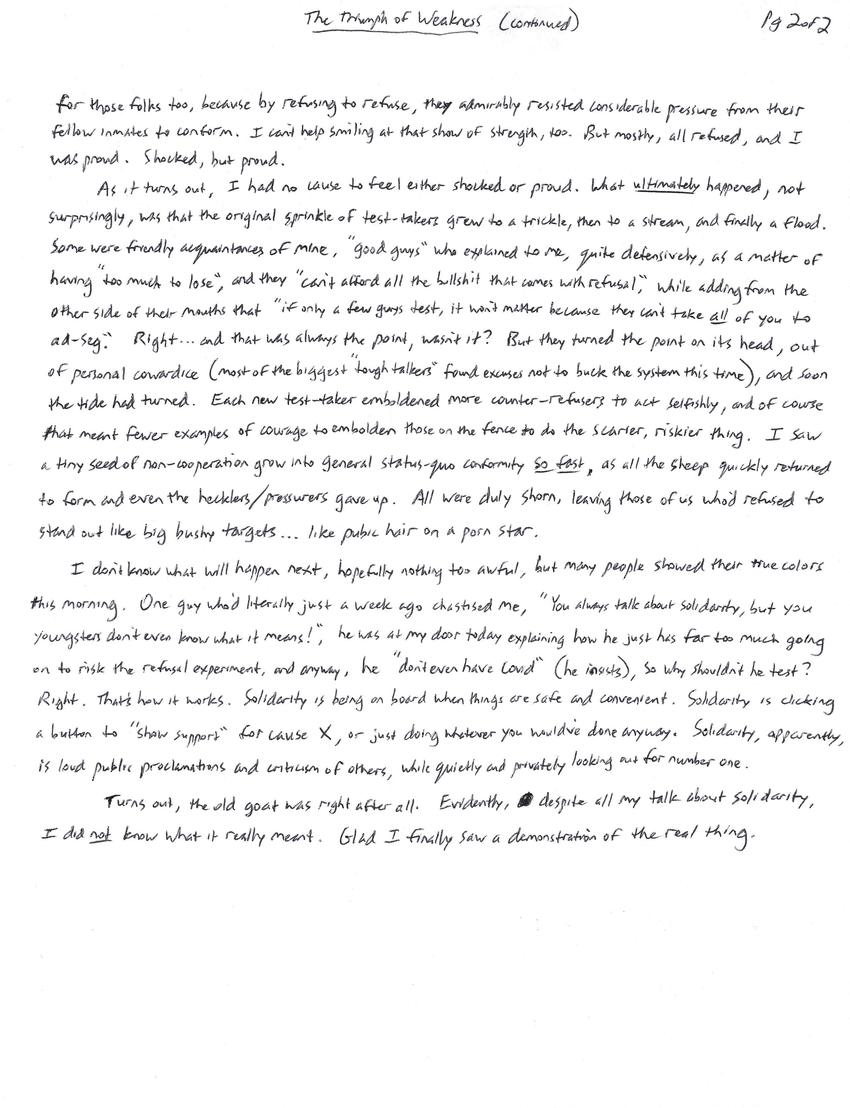 THE TRIUMPH OF WEAKNESS

Like most people in most places, we here in the prison cesspool are exposed to coronavirus, and with it, to various regimens of testing. To be clear, I'm not generally opposed to COVID testing, and if I have the virus I'd like to know, both for self-care and to make sure I don't infect others. That said, testing in prison is a special kind of nightmare to be avoided at almost any cost, simply because the ACTUAL cost of a positive test, even a false one, is so very, very high.

As I've written before (MyCorona et al. Early 2021) what this and most other prisons do to prisoners who test positive for coronavirus is nothing short of torturous. It's extraordinarily disruptive, psychologically upsetting, physically harsh, and medically absurd...a positive test in prison results not in any sort of "care," but in immediately being forced to do almost everything one is told NOT to do by doctors in the real world. Corona victims in prison are ripped out of their stable environments (often cells, where they could easily be quarantined without disruption, and where they are usually already convalescing), then forced to march off to an unknown environment, invariably an open dorm with dozens or hundreds of other sick people crammed into close quarters, with all the anxieties and dangers unique to prison transfer, e.g. running into old enemies and other hostile types, loss of property, loss of "job," loss of educational opportunities, lack of food, etc. This happens during and after packing and unpacking, carrying/pushing/pulling sometimes hundreds of pounds of stuff - everything they own. There's no guarantee they'll be returned to wherever they were taken from, so the psychological turmoil is very real and often extreme. The temporary environment they're forced into is invariably cold, crowded, loud, and unsanitary, and all of this is done to hem, in theory and frequently in actuality, at the peak misery of a serious illness. I know that's certainly how it was for me: physically painful and mentally unsettling, cold, hungry, and utterly without rest.

These are the torturous consequences (among others) of a positive COVID test, so refusing to test would seem to be the obvious solution...except that that false option leads to the same basic outcome. Refuse to test, and you get treated as a positive est. That's the norm. Recently, they've ramped up testing here, so I was heartened today to see a large number of people, seemingly almost everyone, simply refusing to test. After all, what could the prison do to an entire building that wouldn't submit? Quarantining everyone where we are is one plausible response, and personally I wouldn't hope for a better outcome. That's a WONDERFUL scenario! But of course, the pigs could also just find a way to maximize discomfort and destruction, which would suit the porcine nature of jailers perfect, so that's a legitimate concern. And yet, I SAW the mass refusal for our collective benefit...holy shit, was I witnessing...solidarity? In PRISON??? A true May Miracle! One after another, people pooh-poohed the swab and picked up the pen, signing the refusal paper. A few, perhaps one in ten, took the test, and quite honestly I had a lot of grudging respect for those folks too, because by refusing to refuse, they admirably resisted considerable pressure from their fellow inmates to conform. I can't help smiling at that show of strength too. But mostly, all refused, and I was proud. Shocked, but proud.

As it turns out, I had no cause to feel either shocked or proud. What ULTIMATELY happened, not surprisingly, was that the original sprinkle of test-takers grew to a trickle, then to a stream, and finally a flood. Some were friendly acquaintances of mine, "good guys" who explained to me, quite defensively, as a matter of having "too much to lose," and they "can't afford all the bullshit that comes with refusal," while adding from the other side of their mouths that "if only a few guys test, it won't matter because they can't take ALL of you to ad-seg." Right...and that was always the point, wasn't it? But they turned the point on its head, out of personal cowardice (most of the biggest "tough talkers" found excuses to not back the system this time), and soon the tide had turned. Each new test-taker emboldened more counter-refusers to act selfishly, and of course that meant fewer examples of courage to embolden those on the fence to do the scarier, riskier thing. I saw a tiny seed of non-cooperation grow into general status-quo conformity SO FAST, as all the sheep quickly returned to form and even the hecklers/pressurers gave up. All were duly shorn, leaving those of us who'd refused to stand out like big bushy targets...like pubic hair on porn star.

I don't know what will happen next, hopefully nothing too awful, but many people showed their true colors this morning. One guy who'd literally just a week ago chastised ne, "You always talk about solidarity, but you youngsters don't even know what it means!" he was at my door today explaining how he just has far too much going on to risk the refusal experiment, and anyway, he "don't even have COVID" (he insists), so why shouldn't he test? Right. That's how it works. Solidarity is being on board when things are safe and convenient. Solidarity is clicking a button to "show support" for cause X, or just doing whatever you would've done anyway. Solidarity, apparently, is loud public proclamations and criticism of others, while quietly and privately looking out for number one.

Turns out, the old goat was right after all. Evidently, despite all my talk about solidarity, I did NOT know what it really meant. Glad I finally saw a demonstration of the real thing.